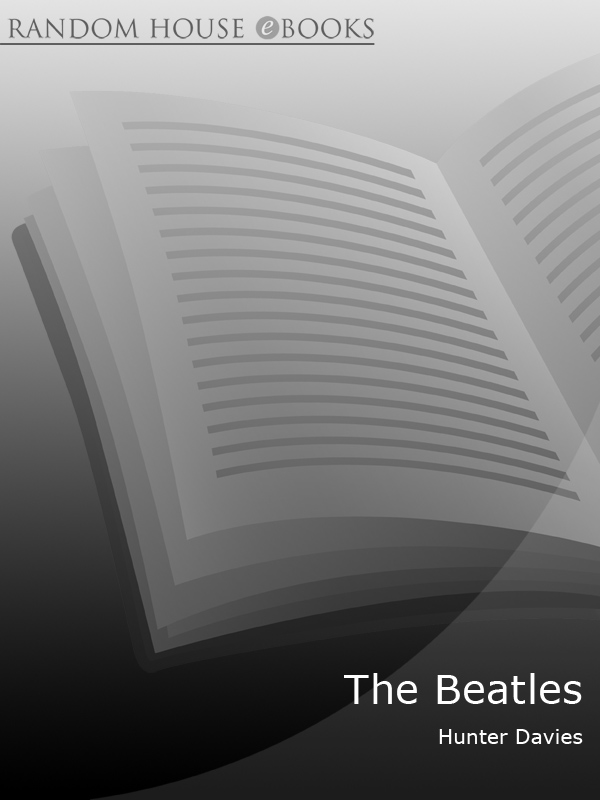 2.
John and the Quarrymen

4.
Paul and the Quarrymen

6.
George and the Quarrymen

8.
From Quarrymen to Moondogs

9.
Stu, Scotland and the Silver Beatles

13.
Liverpool – Litherland and the Cavern

19.
Ringo with the Beatles

PART TWO: LONDON AND THE WORLD

24.
Britain and back to the USA

26.
The Death of Brian Epstein

27.
The Beatles, from drugs to Maharishi

30.
The Beatles and their Music

There’s only one book that ever truly got inside the Beatles and this is it. The landmark, worldwide bestseller that has grown with the Beatles ever since.

During 1967 and 1968 Hunter Davies spent eighteen months with the Beatles at the peak of their powers as they defined a generation and rewrote popular music. As their only ever authorised biographer he had unparalleled access – not just to John, Paul, George and Ringo but to friends, family and colleagues. There when it mattered, he collected a wealth of intimate and revealing material that still makes this the classic Beatles book – the one all other biographers look to.

Hunter Davies remained close with the band and as such has had access to more information over the years. This 40th anniversary edition contains new material which has never been revealed before, from the author's archives and from the Beatles themselves, that will bring new insights to their legend.

Hunter Davies is a prolific British author, journalist and broadcaster, best known for writing the only authorised biography of The Beatles. As a journalist he worked on the
Sunday Times
, where he was chief features writer, and later editor of the Magazine. He wrote regular columns for
Punch
and currently writes for
The New Statesman
, the
Guardian, The Sunday Times
and the
Daily Mail
. For three years he presented
Bookshelf
on BBC Radio 4. He is the author of over thirty books, including biographies, novels and children’s novels. He has ghosted everyone from Gazza and Wayne Rooney to John Prescott. He is also the author of one of the most classic football books of all time,
The Glory Game
, and his own autobiography,
The Beatles, Football and Me
. 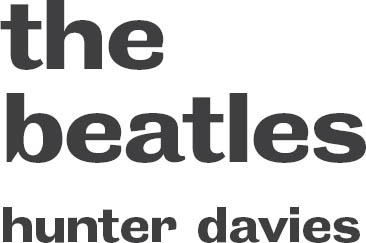 It was 40 years ago today – well, roughly – that this book first appeared. It came out in 1968 and I never thought it would still be in print all these years later. The bulk of the book is how it was then, fresh from their mouths, unchanged, unvarnished, a record of what they were thinking and doing in the 1960s and how they got there. It’s now looked upon as what’s called a ‘primary source’, which mainly seems to mean that others feel free to lift quotes and stuff from it – because, of course, so many of the characters are no longer around to give interviews. I’ve resisted the temptation to rewrite or change the original book, polish and burnish it with the benefit of hindsight, which always makes us all cleverer and smarter than we were at the time.

But here, at the beginning of the book, I have added new material, trying to bring their story roughly up to date and reflect recent events, and also to explain how I got to write the book in the first place. Then at the end I’ve added some notes and thoughts on people mentioned in the book whom I met, both when doing the book and later, but who are now dead.

In preparing to do this new edition, I was looking through my old Beatles archives and records and memorabilia – which of course are growing all the time, as I’m still a mad, daft collector of anything Beatly – when I came across a handwritten lyric I had completely forgotten about.

It’s in George’s handwriting, which all true Beatles fans will recognise, but it’s not a song that he ever recorded, or perhaps even put music to, as far as I can discover.

On the reverse side are instructions on how to reach Brian Epstein’s country house in Sussex, written in Brian’s hand, which
he had presumably given to George. So as a piece of Beatles memorabilia it has double interest.

George’s eight lines are as follows, as he wrote them:

Im happy to say that its only a dream

its only a dream and you make it obscene

with the things that you think and you do
.

your so unaware of the pain that I bear

and jealous for what you cant do
.

But I also know that isn’t true
.

There’s only one crossing out, a stray ‘s’ on the first ‘that’, which would suggest it wasn’t the first draft. I’m sure in a final draft he would have inserted the missing apostrophes in words like ‘youre’, as of course he did go to grammar school. It reads a bit like teenage angst, perhaps written some years earlier and which he happened to have lying around the day I asked him for an example of his writing.

I now can’t remember when exactly he gave it to me, or what he said about it, but working back, it must have been sometime early in 1967 when I visited him at his house in Esher. He would then have been aged 23 or 24.

I had asked John and Paul for examples of their writing, some of their own lyrics, to use in the book, and I did the same with George, which is why he gave me these lines. Later on, though, George gave me a better example, his handwritten lyrics of ‘Blue Jay Way’, which of course did become a Beatles song (on
Magical Mystery Tour
). It was obviously more suitable and interesting than the scrap he had given me earlier, so I never used that scrap in the book or its later editions, just shoved it in a drawer and forgot about it. Until now. Too late of course, to ask George what the inspiration was when he wrote it, where the lines came from, whether he ever put it to music. 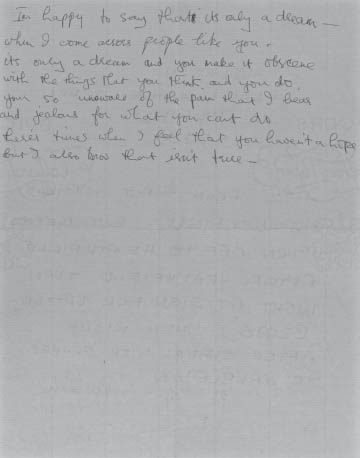 I contacted his widow Olivia, as she had to give me copyright permission to reproduce it. She confirmed that it is George’s handwriting and that it does sound to her like his voice, but she knows nothing about it, since of course it was composed long before he met her. I also sent it to George’s first wife, Pattie Boyd, who confirmed the handwriting, but had no knowledge of the contents.

I’m now going to hand it over to the British Library to join their Beatles collection. They have examples of lyrics by John and Paul on show in the manuscript room, next to Shakespeare, Magna Carta, Beethoven and Wordsworth, but so far nothing written by George.

These Beatles’ lyrics are scraps I picked up from the floor of Abbey Road, which the Beatles said I could have as souvenirs and to help me when writing the section on their music. The cleaners would otherwise have burned them.

I always keep all scraps, notes, letters, documents, tickets, rubbish to do with every book I’ve done, but of course I wasn’t to know that many years later, after Sotheby’s held their first auction of pop memorabilia in 1981, they would turn out to be valuable. I thought when I offered them to the British Museum (where they were at first) that it would refuse them, considering them too trivial and ephemeral. In my will I have arranged for them to go the nation.

Olivia and the British Library are pleased that there will now be an example of George’s writing, such as it is, in their manuscript room alongside those of Paul and John.

The point of this little story is that 40 years ago I didn’t consider this scrap worthy of inclusion in the book. Forty years later, things have rather changed.

One of the many Beatles Brains out there around the world, of which there are now scores, all incredibly clever and learned, will I am sure be able to offer some clues about its contents and background. Who was the girl he was dreaming of? Was it his then wife Pattie or someone else, or someone from his teenage years? In fact was it a girl at all? I now suspect that it was a boy –
in the form of John Lennon. George was only 14 or so when he first met John, the macho leader of the group, and John, as we know, could be very cruel and obscene. But at the same time, George was an excellent guitarist, far better than John – and perhaps John was a bit jealous of him for that reason? Many people did think that John hadn’t a hope and would never settle and have a proper job, which was what John himself feared. But George felt that that wasn’t true and had faith in John, which could be what the last two lines mean. Academics will analyse each line, pondering whether any have been taken from elsewhere. What were his poetic influences? Is ‘youre so unaware of the pain that I bear’ good internal rhyming or is it all highly clumsy and confused and derivative? I’ll leave all that to the experts.