Read Beautiful People: My Family and Other Glamorous Varmints Online

Beautiful People: My Family and Other Glamorous Varmints 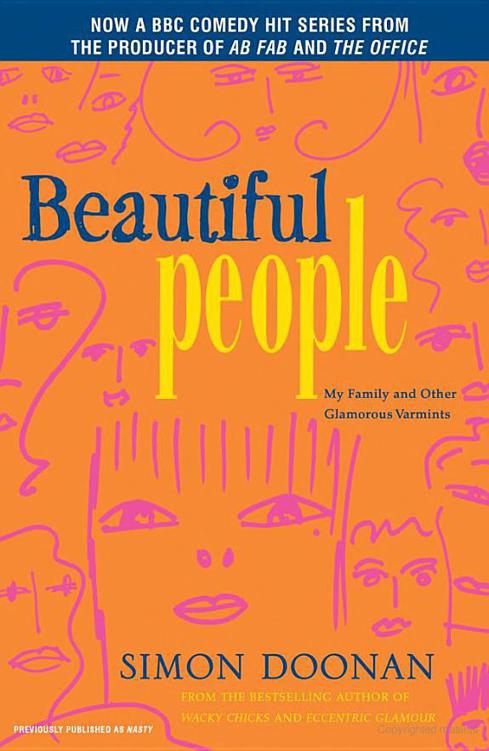 “My favorite fresh new writer of the year award goes to Simon Doonan . . . the most brash and brilliant thing in type.”

“Humor is his ultimate weapon, and whether Doonan’s in Los Angeles getting arrested in Vivienne Westwood plaid bondage trousers or coping with a gay-bashing policeman in Blackpool, he keeps his comic cool. This endearing book pays tribute to a madcap childhood and the power of familial love.”

“Simon Doonan is one of the most clever, funny, wicked, silly, sweet people on this planet. He and his sinister wit are glamorously sublime.”

“Fabulously entertaining. . . . Visionary fashion director of Barneys department store, [Doonan] is known for taking the ordinary and spinning it into the fantastic. . . . A kick, a hoot, a truly wonderful read, with loads of down-and-dirty details about characters who are way more interesting than those dull Beautiful People Doonan was so all afire to find.”

“Simon is a male Lucille Ball.”

“A damned good autobiography—a brisk read about an odd life oddly lively, with comic bits that will make you laugh your slippers off and sad bits that will cause you to wake the cat up for a soothing cuddle . . . amusing and markedly unpretentious . . . [
Beautiful People
] would make a great off-Broadway monologue.”

“Beneath the hilarious camp in Simon Doonan’s memoir. . . , I was touched by his wistful yearning for the life of glamour, glitz, and Beautiful People, which he ultimately achieved.”

Thank you for purchasing this Simon & Schuster eBook.

N
ames and identifying characteristics of certain glamorous varmints in this book have been changed. Conversations presented in dialogue form have been re-created from my memory of them, but they are not intended to represent word-for-word documentation; rather they are meant to evoke the gist of what was actually said.

M
assive amounts of gratitude to the gorgeous folk and glamorous varmints who enhanced my text by jogging my highly selective memory: I refer to my dad, Terry Doonan; my sister, Shelagh Doonan; my old chum Biddie Biddlecombe (also a sister of sorts); all the Adlers; and, last but not least, my therapist Dr. John Pappas.

A
vente
thank-you to all the glamorous, recklessly encouraging varmints over at Simon & Schuster, especially my editor, Amanda Murray. Thanks also to: my assistant, Danny Evans; my agent, Tanya McKinnon; my lawyer, James Addams; and my nanny, Marita.

Across the pond, thanks to the beautiful people at Harper-Collins including, but not limited to, Sarah Bailey, Claire Kingston, Fiona Marsh, and Elizabeth Woabank. Thanks also to Jon Plowman, Caryn Mandebach, Jonathan Harvey, and Gary Ventimiglia for believing in the groovy telegenic nelly potential of this book.

Lastly, thanks to my brain for showing me the ugly truth about the Beautiful People.

Some of it wasn’t very nice,
but most of it was beautiful.

Dorothy Gale,
The Wizard of Oz

When I was six years old, she sneezed and her dentures flew out. They hit the kitchen door with a sharp
clack!
and then rattled sideways across the linoleum floor like a fleeing crustacean. I have absolutely no recollection of graduation day or my twenty-first birthday or what I did last Christmas, but as long as I live, I will never forget the sight of glam Betty Doonan in her tight skirt and white stilettos chasing her fugitive dentures.

Am I strange? Quite possibly.

I was born in 1952, the same year that Queen Elizabeth II ascended to the throne. In 2002, fifty years later, Queen Elizabeth and I both celebrated our jubilees. Naturally, we both took strolls down our respective memory lanes. While hers was doubtless strewn with ermine capes, bejeweled accessories, sparkling crystal toasting goblets, and well-fed corgis, mine was not.

As I wandered through the windmills and filing cabinets of my mind, I was taken aback by what I found, and did not find.

Yes, there were flying dentures, but where was the more picturesque stuff—the Hawaiian sunsets, the Easter bunnies,
and the fluffy kittens? Where were those dreamy summer afternoons spent chasing butterflies through fields of daisies while riding a white Victorian bicycle? Was I too sloshed to recall them? Did they ever exist? And where, most important of all, were the Beautiful People?

As a fashion-obsessed, nelly teen growing up in Reading, it was inevitable that I should develop a deranged fixation with the phenomenon known as the Beautiful People. In the 1960s, the Beautiful People, or B.P.s as we devotees called them, were big news. Every fashion magazine was crammed with fascinating drivel about these self-indulgent glamour pusses. No detail of their lives was too trivial for my consideration: I simply had to know everything about their hairdressers, their palazzos, their caftans (the Beautiful People always seemed to be photographed wearing caftans), their eating habits, or lack thereof, and the unguents they slapped on their gorgeous faces. Where did they live? It wasn’t Reading, for sure. The Beautiful People were totally Euro-fabulous: it was all about Rome and Gstaad and Saint-Tropez. They had never seen, or smelled, the Huntley & Palmers biscuit factory.

What were the qualifications needed to join the B.P.s? Were there any membership dues? Nobody seemed to know. It was all very mysterious. There were certain common denominators: most Beautiful People seemed to have loads of spare cash, ramparts of thick hair, and fake lashes. Having a closet full of Valentino couture seemed like it might speed up the approval process.

The fact that I was several hundred miles away from the nearest Roman palazzo living in a rooming house with a
bunch of batty relatives and miscellaneous lodgers only served to fuel my ardor. I daydreamed of escaping the grotty milieu in which fate had seen fit to place me and running off to the fashionable excitement of the big (Emerald) city, where the Beautiful People were waiting to welcome me into their bracelet-encrusted arms.

So where were they now? Why, when I took that stroll down memory lane on my fiftieth birthday, could I find no trace of them?

Though devoid of B.P.s, my memory banks were, I hasten to add, by no means empty.
Au contraire!
As I began to write this memoir, I found that they were teeming with vivid recollections. I found half a century of jarring occurrences, freakish individuals, fashion follies, deranged unsavory types, varmints, and vermin. There were hernias and food poisonings, cringe-making encounters with law enforcement, and stomach-churning regrets. There was no shortage of heartwarming material.

Woven through this tapestry of recollections, like a gaudy strand of hot-pink silk, was my family, immediate and extended, in all its raw majesty: my mother, the feisty 1940s broad; my troubled and anarchic grandmother Narg; my blind aunt Phyllis; my bra-burning sister, Shelagh; and Biddie, my showbiz-crazed childhood best friend.

Revisiting my
temps perdu
proved both cathartic and entertaining. Sometimes I wept, but more often I chuckled. As you may have already predicted, it was not long before I had my Oz epiphany and figured out that there was indeed “no place like home.” What happened to the Beautiful People? Like
Dorothy’s mates, they were there all along. I had simply failed to recognize them.

This memoir is intended to set the record straight and pay a bit of long-overdue homage to the
real
Beautiful People,
my
Beautiful People. It’s a toast not just to my family and the glamorous varmints I have known but to all the tarts and trolls and twinkies and trouts who have thrown on an elegant chapeau, or a ratty wig, and gone in search of glamour and fun.

Here’s to us! Long live the Beautiful People!

A
t the age of twenty-one I went in search of the Beautiful People.

Precious Stones by Darrien Lee
Gods Without Men by Hari Kunzru
Succession by Cameron, Alicia
Wanted by ML Ross
The Red And The Green by Iris Murdoch
When Hoopoes Go to Heaven by Gaile Parkin
Purl Up and Die by Maggie Sefton
Infected by Anthony Izzo
Last Chance Knit & Stitch by Ramsay, Hope
Send Angel! (A Frank Angel Western #2) by Frederick H. Christian
Our partner