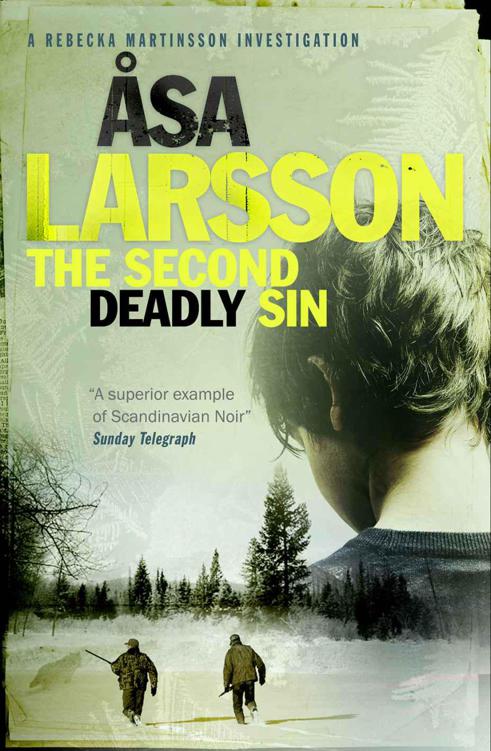 Translated from the Swedish by Laurie Thompson

First published in Australia in 2013 by

The moral right of Åsa Larsson to be identified as the author of this work has been asserted in accordance with the Copyright, Designs and Patents Act, 1988.

Laurie Thompson asserts his moral right to be identified as the translator of the work.

You can find this and many other great books at:
www.quercusbooks.co.uk
www.maclehosepress.com 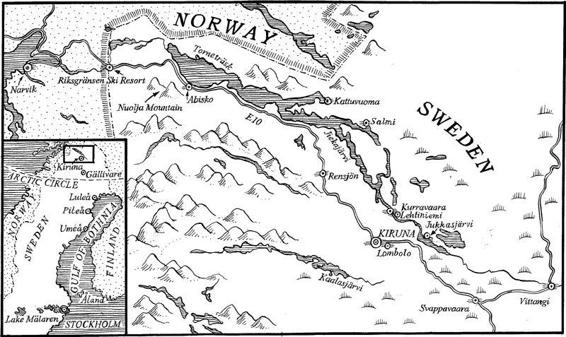 I am reading Leviticus. God is furious, and is reeling off all His laws and the punishment in store for those who fail to obey them. He is spewing forth menace and anger. In Chapter 20 the Lord says that anyone who sacrifices a child to Moloch “shall surely be put to death: the people of the land shall stone him with stones”. God will direct His wrath at him and isolate him from his people. How can that happen when the culprit has already been stoned to death, I ask myself. But if people turn a blind eye to a man who has sacrificed a child to Moloch, all his family will be subjected to the wrath of God.

I read a little about Moloch. It seems that he is a god who can provide riches, bountiful harvests and victory in battle. Was there ever any god who failed to promise such rewards? Children were sacrificed. Hollow statues of Moloch were made of copper. His embrace was voluminous. Fires were made inside the statue, making it red-hot. Then a living child would be placed in Moloch’s lap.

I thought about that as I wrote this book. Sacrificing a child in order to prosper, in order to achieve earthly glory.

How can a dog possibly scream like that? Samuel Johansson has never heard a dog make such a noise before.

He is in his kitchen, making a sandwich. His Norwegian elk-hound is on a running leash in the back yard. The calm before the storm.

Then the dog starts barking. Loud and angry at first.

What is it barking at? Certainly not a squirrel. Johansson recognises the way his dog barks at a squirrel. Surely not an elk? No, elk barks are less strident, more substantial.

Then something happens. The dog screams. Shrieks as if the gates of hell have just opened up before it. It is a sound that fills Johansson with cold terror.

Johansson races outside. No jacket. No shoes. No clear thoughts.

He stumbles his way through the autumnal darkness, towards the garage and the dog kennel.

And there, in the light from the lamp over the garage door, stands the bear. It is tugging at the dog’s body, trying to drag it away, but the dead dog is still attached to the leash. The bear turns its bloodstained jaws towards Johansson and roars at him.

Samuel steps back somewhat unsteadily. Then he summons up superhuman strength and runs faster than he has ever run before,
back to the house to fetch his gun. The bear stands its ground. Nevertheless, Johansson seems to feel the beast’s hot breath on the back of his neck.

He loads the rifle with his wet hands before cautiously opening the door. He must keep calm and shoot accurately. Otherwise it could be all over in a flash. A wounded bear would take less than a second to pounce.

He creeps through the darkness. One step at a time. The hairs on the back of his head are sticking out like nails.

The bear is still there. Gobbling down what is left of the dog. When Johansson cocks the gun, it looks up.

Johansson has never trembled so much. There’s no time to lose now. He tries to stand still, but it is impossible.

The bear shakes its head threateningly. Snarls. Huffs and puffs like a pair of bellows. Then it takes a deliberate step forward. That is when Samuel shoots. There is an explosive blast. The bear falls. But quickly it stands up again. And disappears into the darkness.

It has vanished now into the pitch-black forest. The light over the garage door is no help at all.

Johansson walks backwards to the house, aiming the gun left and right as he does so. Ears pricked, listening for sounds from the forest. That bloody bear might come bounding towards him at any moment. He can only see for a few metres.

Twenty paces back to the door. His heart is pounding. Five. Three. He’s inside.

He’s shuddering now. His whole body is shaking. He has to put his mobile down on the table and hold onto his right hand with his left in order to push the right numbers. The leader of the local hunters responds after only one ring. They agree to meet at first light. There’s nothing they can do in the dark.

As dawn breaks all the men from the village gather outside Johansson’s house. It is -2°C. Tree branches white with frost. Leaves have fallen. Rowan berries gleam rustred among the grey. Something feathery is floating through the air – the kind of snow that never settles.

They stare at the devastation in and around the dog kennel. More or less all that is left, attached to the running leash, is the dog’s skull. The rest is blood-soaked slush.

It is a hard-boiled collection of men. They are all wearing checked shirts, trousers with lots of pockets, belts carrying knives, and green jackets. The young ones have beards and a peaked cap on their heads. The older ones are clean-shaven and wear fur hats with ear flaps. These are men who make their own motorised carts for dragging back home the elks they have shot. Men who prefer cars with carburettors, so that they can mess around with the engines themselves and are not dependent on service garages where they nowadays just attach computer cables to the cars.

“This is what happened,” the hunt leader says, as the more gnarled members of his team stuff new wads of chewing tobacco into their mouths and glance furtively at Johansson, who is having difficulty in controlling the tics in various parts of his face. “Samuel heard the dog howling. He grabbed his gun and went out. We’ve had bears prowling around here for quite some time now, so he realised that might be the problem.”

“Anyway. You go out with your rifle. The bear is gobbling away at the dog, and turns to attack you. You shoot it in self-defence. It was coming towards you. You didn’t go in and fetch your gun, you had it with you from the start. No messing about in this case. Nobody’s going to be prosecuted for breaking hunting laws, right? I rang the
police last night and put them in the picture. They had no hesitation in classifying it as self-defence.”

“Who’s going to hunt it down?” somebody wonders aloud.

That piece of information is followed by total silence while all present consider the implications. Mäkitalo comes from Luleå. It would have been good if somebody from their own local hunting team had been commissioned to track down the bear. But none of them has a dog as proficient as Mäkitalo’s. And deep down they wonder if they are proficient enough themselves as well.

The bear is wounded. And so highly dangerous. It is essential to have a dog that dares to hold the bear at bay, rather than panicking and running back to its master with the ferocious beast hard on its heels.

And the hunter must not get cold feet either; when Teddy comes crashing through the undergrowth he might have no more than a second in which to react. The lethal target area on a bear is no wider than the base of a saucepan. And the hunter is aiming without a rifle support. It’s like shooting a flying tennis ball. If he misses it is by no means sure that he will get a second chance. Hunting bears is not something for anybody with shaky hands.