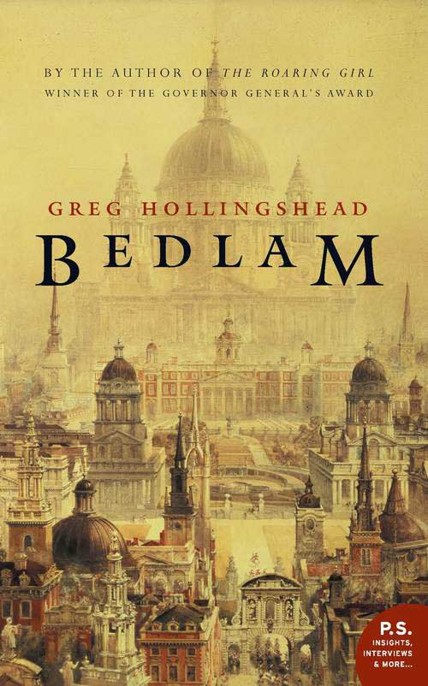 Love is merely a madness; and I tell you, deserves as well a dark house and a whip as madmen do; and the reason why they are not so punished and cured is, that the lunacy is so ordinary that the whippers are in love too.

I’ll tell it, cried Smelfungus, to the world. You had better tell it, said I, to your physician.

IN THE DEAD HOUSE

An Interview with Greg Hollingshead

Other Books by Greg Hollingshead

This is a work of fiction inspired by a true story.

Here at last a letter from me that will get through. No keepers in this place to pocket everything I write. Alas, this time to say farewell, and do not weep for me. Forgive me I deceived you today—or did my best. I could not bear to shatter the hope in me of one who has already lost so much. Your grief, my love, is etched in your eyes. From my first glimpse of you again I knew our boy was gone, and right or wrong resolved to put a cheerful face on my own condition. Now I sit at my little attic dormer desk and look out at a pink-ribbed vault of sky, the sun set and you returned to London with my former adversary. I sit and think how it all begun and try to grasp how the lives of two whose love has never faltered should come to this.

I remember you once blamed the Revolution in France, which chaos first drew me from your side. But that, my love, was only me saving England from the bloody contagion. It was not my two years as secret emissary between nations nor my three in French gaols that doomed us but a fateful encounter on the last ship to carry me home.

I never told you this. As the one at the time who prevailed, or thought
he did, I made little of it. Only years later, after you were gone, its true significance came crashing home.

This was in the spring of 1796. I had not long since observed my third anniversary imprisoned in France, most lately at Pleissis, for the crime of attempting to stop the war. Napoleon Bonaparte, already French general in chief, was hard at work reducing the tag-end of the century to smoke and debris. At Pleissis, come dusk, our guards, after they would find and destroy my daily letter to you, used to slip into Paris, where the street signs had been torn down in the name of the French people and the fountains spilled with garbage. The aristocracy were dead or abroad, their property seized. The city was controlled half by the remaining rich and half by the liquor hawkers, sweet-sellers, and prostitutes. For those who loved to dance, drink, smash, grab, brawl, and whore, Paris was the best party in the world.

Not for me, who starved in my chains, until one day I was hauled out into the high street of a shack suburb and marched by three gendarmes down a mud track into the setting sun. Another transfer, I bleakly assumed. But the longer we trudged (sleeping where we could) through the terrible silence of the-cannons-are-elsewhere, the greater grew my hope of home to you. Though I was barefoot and often refused even bread to eat and suffered repeated personal violence, by the strength of that hope I endured every indignity as an Englishman. And though at Calais I was tossed like a gunny-sack of bones into the hold of the first-departing British frigate of war, I crawled to the foredeck and there awaited my first green glimpse of home. The night-black sea was rolling, the sky clear, the stars beginning to fade. And when the sun rose high and warming, my thoughts after three years of French dungeons sloughed that darkness like a pestilential coil.

Or so I fondly imagined. For even as I lay on the deck softly dozing, someone squatted at my ear to ask in a whisper if I remembered him.
When I confessed I did not, he said we’d sat next to each other for two months in autumn 1794 in the gaol at Lille. Half awake and with no memory of sitting next to anybody at Lille, I politely responded what a remarkable coincidence therefore that we should be travelling home to London on the same vessel.

At this he gave a palpable start. “How do you know my destination?”

“Forgive me, I assumed it—”

“As a mere tea-broker might assume he could prevent war between the greatest nations on earth?”

Now it was my turn to give a start but I answered calmly, to keep the cat in the bag, “Assume and fail. A casualty of politics in high places.”

“My name is Chavanay. We met—I told you. My father was once cook to Baron Hawkesbury, who’s any day now to become Earl of Liverpool.”

At the name of Hawkesbury my blood ran cold. “What—” I swallowed—“What makes you think I know the baron?”

To this question he made no answer, only smiled. As he did, it happened the Dover cliffs made their first slow surge into view, chalk ghost reminders that though I might have failed to prevent the war, lost all hope of politics, languished three years in French gaols, and now had a horse-leech of a French spy at my neck, I had only ever acted out of devotion to my country.

I don’t need to tell you with what wild impatience I paced the port stable doorway as the lads poked about in preparation of a coach and four. When the steeds stood snorting in their traces, “Are you coming?” I called to Chavanay. He was, and off we galloped.

France had been bitter cold, England was not. A morning fog lay like
cream in the hollows. As for me I was sunk in a reverie of you, but Chavanay, though I’d intimated the reason I was dressed in rags was to conceal French diamonds, kept tugging at my sleeve to complain he’d never travelled in so expensive a style and hinting he should not have accepted my offer. To calm him I observed he’d been asked to pay but half the cost of a routine chaise and pair to London, and what was this but a chaise and four at full gallop, all the way? And who did he think would pay the balance? Assuming the answer must be not him, he was too ungenerous to acknowledge who he thought would pay it (me!) and so fell quiet, though he was still not happy, I could tell. Fortunately at Dartford, finding I had run through all his money to bribe the postillions and outriders to maintain this breakneck pace, I regretted I must take another road. When he objected, saying he’d paid all the way to London, I told him good, because that was where he was going. I then took my leave of him, before he could further blight the finest homecoming a husband and patriot ever knew.

Little did I know I had just made a dupe of one who with his confederates was already set to blight the remainder of our days and destroy me if they could.

From Dartford I again proceeded on foot, eager as a child. Such earnest, innocent fools we comport ourselves in memory, when all the fool lacked was foreknowledge. That night I slept snug in a haycock at Black-heath. On the road before first light, I fell in with a gentle drover escorting his bullocks to the City. As we strolled along amidst the steam from their flanks, his dogs obedient at our heels, he shared his breakfast of bread and milk, and I asked him how our King did with so much republican sentiment afoot in the world. “Look at America,” I reminded him. “Look at France.”

At first he regarded me warily, as if this was code, to sound him. He
then replied our war with France had surely killed republicanism in Britain.

“Killed or only run to ground?” I wondered.

Perhaps in London there might be clandestine activity yet, he admitted, but if there was he knew nothing about it.

“Who would,” I said, “when the government has empowered itself to open private correspondence, and conviction for republican sympathies results in evisceration and your bowels set on fire as you watch?”

At this he only shook his head and give a resigned shrug.

“In war time, governments are apt to grow extreme—” I prompted him.

But by his fervent response—”God bless his Majesty!”—I knew he was ready to let the topic go, and who could blame him? How did he know I wasn’t a republican myself? Or a government agent roaming the countryside?

“Yes, indeed,” I assured him. “God bless our beloved George—”

Turning to less dangerous matters, we soon reached the outskirts of the capital, where it being Monday and early yet, a hundred thousand furnaces of kilns, glasshouses, blacksmiths, gunsmiths, and dyers’ yards were not yet befouling the air with their coal-smoke reek. All was Sabbath-fresh, as in purer days. Approaching the river, we could hear the hails of the boatmen and glimpse in the sun’s first rays the Monument to the Great Fire, topped by its gleaming gold ball; west of it, the globe and steeple of St. Paul’s all a-glow too; and—was it possible, at this distance?—on breezes from over the Thames, one moment you caught the sewage scent of Fleet Ditch, the next, Billingsgate’s fish stench. All to say I was safe home at last.

My drover and I were soon caught in a crush of sheep, goats, and cattle bound for Monday market at Smithfield. Everybody shouldering
across London Bridge in one bellowing, raucous herd. At Thames Street we said our farewells, he driving his charges to the Navy abbatoir at Tower Hill, me stepping straight on to Leadenhall Street and home.

So here I was, back once more at the centre of the world, Buckingham House not two miles west, where at this very moment the King, in his royal fashion, would be wolfing down breakfast. Who was it said to walk alone in London is the greatest rest? The greatest rest and the greatest ride. I’d forgot how busy the City is (though surely never this busy), for everything in London is done full tilt. But while it might be thought so intense a hail of humanity must undo a man still weak from three years enchained in a cell, on me it had the opposite effect, for every look, joke, curse, shout, and shove meant one thing: love and freedom.

And I did reach home and held you, my dearest, in my trembling arms, and so we were once more Matthews and Wife, Agents in Tea. And though today I don’t regret I did what must be done, I do regret the anguish I have caused you and beg you forgive this too, you who never betrayed me and only ever did what you thought was right. For though on my return we cuddled down safe and snug in energetic hope of a family, yet too soon mental torment overtook me, and before you scarce knew where I was carted off to and not at all why, I leapt the wall and sprinted back home to you.

The rest of this dreadful tale, my love, you know. But know this too: You are my soul and always was.

Shadow of the Silk Road by Colin Thubron
Lewis Percy by Anita Brookner
Entropy (The Countenance Trilogy 3) by Moore, Addison
On Thin Ice 2 by Victoria Villeneuve
Betrayed by Suzetta Perkins
Two Miserable Presidents by Steve Sheinkin
Step-Ball-Change by Jeanne Ray
Wicked Charms by Janet Evanovich
To Explain the World: The Discovery of Modern Science by Steven Weinberg
Anterograde by Kallysten
Our partner