Read Belong to You Online 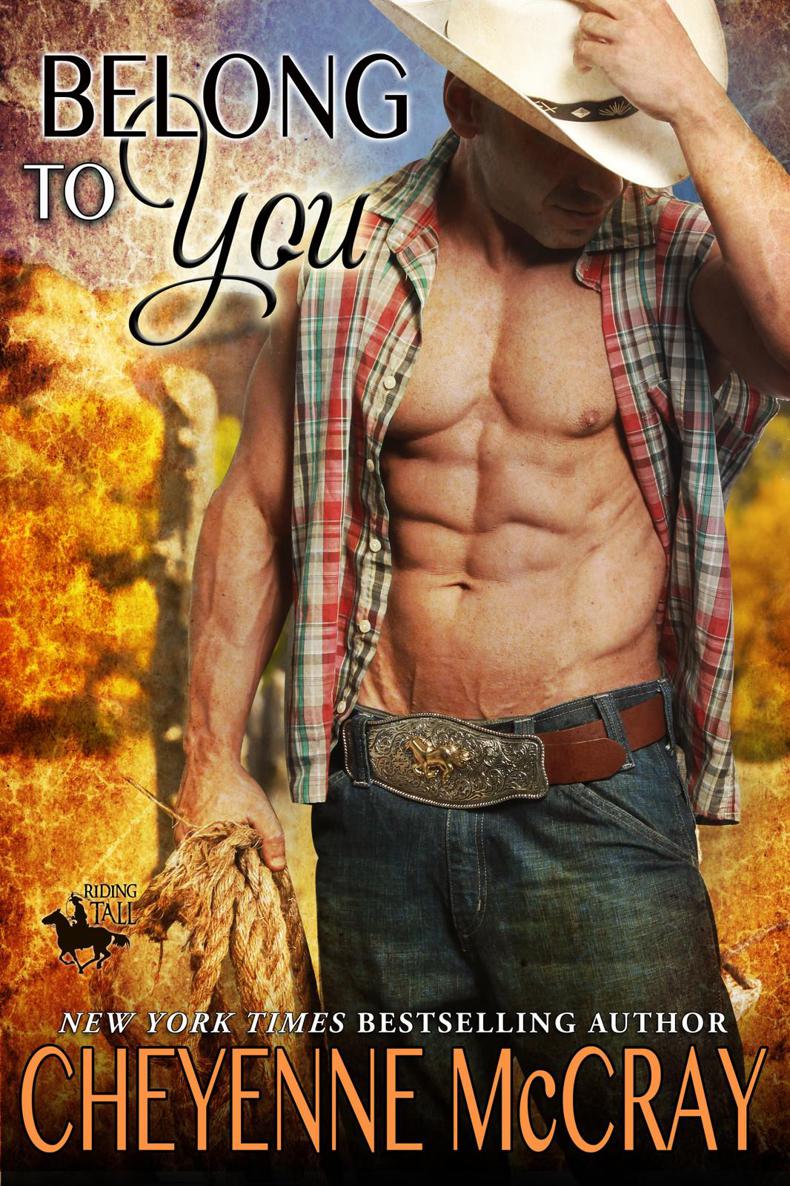 Excerpt… Held By You

Excerpt… Made For You

Belong to You by Cheyenne McCray

All rights reserved. No part of this e-Book may be reproduced in whole or in part, scanned, photocopied, recorded, distributed in any printed or electronic form, or reproduced in any manner whatsoever, or by any information storage and retrieval system now known or hereafter invented, without express written permission of the publisher, except in the case of brief quotations embodied in critical articles and reviews.

This is a work of fiction. Names, characters, places, and incidents are products of the author’s imagination or are used fictitiously. Any resemblance to actual events, locales, or persons living or dead is entirely coincidental.

Anna Batista sat next to Chandra Johnson in the audience in the high school auditorium as they watched the debate between the two candidates for the office of Yavapai County Sheriff.

The incumbent, Sheriff Mike McBride, was facing off with his opponent, Chad Johnson. The debate between Sheriff McBride and Chad had been a heated one so far. Anna knew very little about the history between Mike and Chad, but she knew from Chandra that some bad blood between them went back a long way.

“Sheriff McBride, what is your opinion on the escalation of drugs and violence in Prescott and the county as a whole?” the moderator asked.

While Mike responded to the question, Anna cocked her head to the side and appraised him. She admired his strength and comfort under fire. He didn’t act or talk like a politician and his down-to-earth demeanor and relaxed personality had made him popular, along with his sense of humor. One of the reasons she was certain he had been elected to county sheriff in the first place was his likability. He was tough but friendly, firm yet fair.

The fact that Mike was a dead-sexy cowboy was only the icing on the cake. All six-one of him was muscular, and his skin was deeply tanned from being out in the sun so often. His features were carved, his eyes a warm brown. Damn, but he was hot. The fact that he was in uniform didn’t hurt at all.

A frown creased her face as she watched Chad Johnson take his turn at answering the same question about the escalation of drugs and violence in the area. Chad wore a business suit and bold red tie. He couldn’t look more different than Mike.

“It’s clear that something needs to be done in regard to this issue,” Chad was saying. “Under my opponent’s leadership, these problems have increased drastically.”

Mike was given the opportunity for rebuttal and he laid out the statistics. Yes, there had been an escalation, but the number of arrests leading to conviction had also increased.

The moderator moved on to a question for Chad, asking what he thought the top priority should be for the next term for sheriff, other than public safety.

Chad gave one of his winning smiles and laid out his response. “Our children,” he said. “Issues exist in the public school system and we need to make all the positive differences we can.”

Anna mentally shook her head at Chad’s canned answer to the question. He took the easy way out.

“Too bad Mike McBride is my brother’s opponent.” Chandra’s platinum blonde hair swung forward as she leaned close to speak in Anna’s ear. Anna caught the scent of Chandra’s light floral perfume. “Mike is so gorgeous,” Chandra said. “Beyond gorgeous.” She sighed. “But he’s the enemy.”

Anna made a noncommittal response. How could she tell her friend that she thought Chad didn’t stand a chance against Mike in the race or even in virility and looks?

With blond hair and blue eyes, Chad was good-looking and popular in his own right, but he was all politician. He was an attorney in Prescott and his family owned a good portion of the town. The Johnsons, for the most part, were well known and respected, with just a couple of bad apples in the bunch.

Anna shifted in her seat as Chad made a couple of disparaging remarks about Mike’s term in office. She hated it when politicians played dirty, and she was certain Chad was that kind of politician. So far the race hadn’t been too bad, but she could see it coming.

After Anna and her family moved to Prescott, she’d become good friends with Chandra, who was genuine and kind.

On the other hand was her twin. Whenever Chad had spoken with Anna, it had always seemed to her that he was preparing to run for office. At the time she hadn’t realized he would be running for sheriff.

She looked down at her fashionable chunky black heels as she crossed her legs then tugged down her red dress that reached low on her thighs. She linked her fingers and rested her hands on her bare knee. Even though Chad came off as having a pleasing personality, she knew it was something he had worked hard to cultivate. He had a politician’s polish and presence, and Anna wondered how far that would take him.

Unlike Mike, who had been a decorated officer with the Prescott Police Department, Chad was an attorney with no law enforcement experience. However, in Arizona, having that kind of experience wasn’t required. It was archaic. All that was necessary for the individual running was that he or she was a legal Arizona resident and resided in the county for which they wanted to be sheriff. That was it. No job application, background check, criminal history check, or psychological examination was required. After being elected, they weren’t even given job evaluations like other county employees.

Anna mentally shook her head. The sheriff wielded a great deal of power in the county and was responsible for enforcing the law and running the county jails, along with a great deal of responsibility beyond. That included managing a budget in the millions. With respect to requirements for running for sheriff, Arizona was a bit of a backward state.

“What is your position on illegal immigration?” the moderator asked Chad.

Anna froze. Ice seemed to chill her spine as Chad looked directly at her. The eye contact only lasted a moment but it felt as if her heart had stopped. She felt Chandra stiffen beside her.

Chad continued speaking, but Anna could barely hear him because of the buzzing in her ears. She caught a few words including “tougher stand on illegal immigration,” and “crack down on undocumented aliens in Yavapai County.”

She had known the subject would come up. It was an important topic on both parties’ platforms, and to the people. But having Chad look at her and meet her gaze caused a sickening sensation to twist her belly.

Does he know?
She glanced at Chandra who was watching Chad.
Did Chandra tell him?
It seemed as though Chandra was making a point of focusing on Chad. She looked…angry. Had Chandra let something slip accidentally? She wasn’t the kind of person to do that knowingly.

Anna was so wrapped up in her thoughts that she didn’t hear Mike’s response to the question on illegal immigration. She was just grateful he hadn’t looked at her. Not that he had any reason to—she’d never even met the sheriff.

When the moderator moved on to a different topic, Anna tried to relax. She knew that with the way things were, she’d never be able to let her guard down. Ever. It just wasn’t possible.

Chandra reached over and squeezed her hand. Anna met her gaze. Her friend said nothing, but her friendship and support were clear. If Chad had learned Anna’s secret, then it either hadn’t been through Chandra or it had been inadvertent.

Anna gave Chandra a little smile before she turned back to the debate that had finally ended.

“Come on,” Chandra said. “I told Chad I’d meet him after the debate.”

The last thing Anna wanted to do was face Chad, but she forced a smile. “Sure. Let’s go.”

Both candidates left the stage and Anna hooked her purse over her shoulder and followed Chandra backstage to see her brother. Anna lost Chandra as they wended their way through the crowded area and Anna stopped and frowned as she tried to look past shoulders. At five-one, Anna had a bit of a height disadvantage.

A man’s tall form stopped right in front of her. She looked up and caught her breath. Mike McBride. Looking right at her.

His presence filled the room in a way that made her feel as if no one else was there but the two of them. His aura was far more commanding than she’d ever noticed with Chad. He had seemed larger than life on stage, and in person his personality was magnetic. She couldn’t take her eyes off him.

She took his hand and stilled. The heat that traveled through her was like magic. It tingled through her as if she had the power now to cast a spell. She swallowed and spoke hesitantly, which was so unlike her. “I’m Anna. Anna Batista.”

“A pleasure to meet you, Anna.” He gave a sexy smile that melted her. The smile was nothing like what she’d seen from him before when he’d spoken to TV cameras or during the debate. It was as if this one was made just for her.

Then it hit her. What if he’d learned her secret? Was that why he was talking with her? To learn more?

“Nice to meet you, too.” She managed to draw her hand away from his but couldn’t seem to move away from him to go find Chandra.

“I saw you standing here,” he said with ease. “You look a little lost.”

His charm had her completely off balance. “I lost my friend in the crowd.” She pushed long dark strands from her face. “I’m sure I’ll find her, though.”
All I have to do is find your opponent.

Now that could be awkward.
She shook her head. “I can find her.”