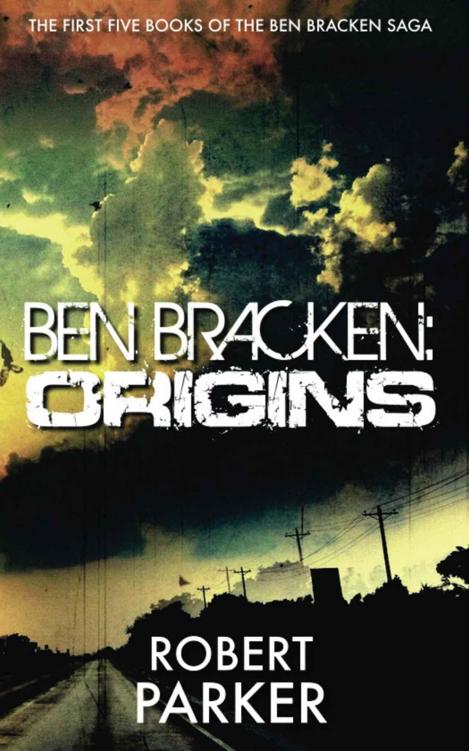 The Things We Can’t Undo

The right of Robert Parker to be identified as author of this Work has been asserted by him in accordance with sections 77 and 78 of the Copyright, Designs and Patents Act 1988.

All rights reserved. No part of this publication may be reproduced, stored in retrieval system, copied in any form or by any means, electronic, mechanical, photocopying, re- cording or otherwise transmitted without written permission from the publisher. You must not circulate this book in any format.

PRAISE FOR THE BEN BRACKEN STORIES

“Really enjoyed this. A compelling, heart-stopping thriller with a really interesting and provocative central character. I certainly want to see what Ben Bracken gets up to next. It makes a change to find a book in which the story is based in the UK (Manchester to be precise). I bought this for my holidays in Spain next week and just started to read it - then found I couldn't put it down and spent the entire spare time of the bank holiday reading it!”

“Intriguing read. It holds your interest very well. Is not a predictable book. I am sure you will love it.”

“I've never quite read a story like Deansgate Deadline. I loved the darkness and mystery surrounding the main character, Ben Bracken. I hope to see more from this author, following Bracken's back story. There are lots of questions about this mysterious man that I'd love to have answered. This read was immediately intriguing”

It is the dead of night. The air is crisp, the sky a dirty blue, and the city of Manchester sleeps - a slumbering troll of granite, glass and humanity.

Trev walks across the quiet cobbles of the city’s Northern Quarter, with his earphones jammed in and his collar up tight. He is on the happier side of 30 but at this early hour looks like an unsettling cocktail of insomnia and zombie. The Northern Quarter is Manchester’s miniature New York city - part homage, part kiddy version. Trev likes it there and he crosses the road to his flat on Church Street. He uses the key fob to open the door, which responds immediately with a soft beep and the click of a lock somewhere.

He checks for post in the metal mail lockers opposite the door - this time more out of habit than anything. He knows there’d be no post at this unsociable hour. Along the hall from the lockers, he calls the lift, which was luckily already resting on the ground floor. It lets him in immediately. Inside, he selects the 5th floor and leans against the wall, letting out a deep sigh. He is, in regular speak, zonked. A long shift, barreled straight into a late night which thundered into almost an all-nighter, but he just managed to stem the flow of work long enough to get home, get a couple of hours shuteye before it all starts again in a couple of hours. The mere thought of it sends Trev a bit sickly.

The lift arrives on five, and he walks out, popping his earbuds out as he goes. He undoes his jacket, and jangles the keys from his jeans pocket, heading for flat 526. He reaches the door, and takes extra care when putting the key in the lock to ensure it’s as quiet as he can possibly do it. The door opens with a clunk, which brings a slight grimace. All day, every day, noise carries itself around the building like an omnipresent rude landlord - always there, always making it’s presence felt. He opens the door and goes inside.

The flat is usually pretty beautiful. High ceilings, expansive windows, hearty bare floorboards. But as he opens the door, it looks anything but. The shelves that line the entrance hallway have been ripped bare, with the contents all over the floor. Pictures smashed, books ripped, ornaments broken beyond recognition. Trev is immediately concerned and terrified, panic rising dizzily without rhyme or respect. He panics not for his things, but for the person who was here when he left yesterday.

‘Freya!’ he shouts, as he jumps over the debris on the floor and rounds the corner - to see the entirety of the flat’s open living-space laid bare. It’s been practically destroyed.

Even though the lights are off, he can see fine - thanks to the orange glow of the fridge that has been ripped from the wall and upended, it’s contents spilling out onto the floor like innards on the Savannah next to a fresh kill. The rest of the room is almost an ode to the destruction of the hallway. Destruction all over the floor, debris everywhere. The coffee table is upended, the plasma tv has a crystalline hole in it and the sofa has been slashed. His Playstation sits on the kitchen counter, strangely nowhere near the tv, with a hammer embedded cruelly through it’s plastic housing.

No time to stop, Trev pretty much surveys the damage on the move as he keeps following the arc of the hallway to the bedroom. He throws open the bedroom door, to the same level of disarray in his once (almost) immaculate bedroom.

No answer again. He checks the ensuite - empty, and largely untouched by the mess. He checks the main bathroom just out in the the main hallway, the last remaining room of the flat unchecked. Empty again, only the soap bottles and cleaning products around the sink have been smashed. He heads straight back into the living room.

He steps on the debris, crunching it down, while he scours the room to look for some sign of Freya, but he knows it’s useless. Freya isn’t here. Two thoughts begin to dominate Trev’s mind and wage a war against each other for prominence: who would do this? and: where is Freya? Practicality begins to dawn and this causes a third thought to emerge: POLICE.

He goes to the wall mounted phone by the door, which is by some miracle still there. As Trev gets nearer, he realizes it’s no miracle. Stuck onto the front of the phone, right across the keys, is a bright green PostIt note. On it, in marker pen, is scrawled:

Trev looks at it hard, as if searching for a clue from the note as to who is behind the madness left here. Nothing. If anything, the handwriting is rather neat. He knows he has to call. He thumbs the number in, trying not to jitter the handset out of his hands.

‘It is truly about time.’ A voice greets.

‘Who is this?’ Trev murmurs.

‘On the standard scale of one to ten, how do you like the remodel?’ The voice is male, and has a scratchy depth to it that suggests middle age, perhaps older. The accent is cockney, all apples and pears.

‘What do you want?’ Trev pleads.

‘Listen to this please’ the voice asks. The line quietens, then a struggle can be heard. A muffled couple of thuds, the rustle of fabric, and the odd frightened squeek. Trev is distraught - he knows immediately who it is.

‘Trev! Trev!’ screams Freya. Her voice contains a timor that Trev has never heard before. Utter terror. Hearing it for the first time horrifies Trev. His protective instincts for Freya take a violent surge.

The male voice returns, a little quieter, as if away from the phone. ‘Tell him what you can see’.

More struggle, but it is stopped almost as soon as it has begun by a deeper thud.

‘Tell him what you can see’ the man repeats.

Trev can’t take anymore, and tries to inject calm into his voice. ‘Tell me, baby’.

‘It’s very dark. I’m in a room somewhere. I’m alone with this... man but his friends are just outside. He has a gun pointing at my forehead.’

Trev’s world pretty much bottoms out. The man’s voice taunts out, ‘Where’s my finger?’

The man’s voice becomes louder, as he takes the phone.

‘Right then , we have established your problem. Your problem is, your dolly-bird here is a twitch away from a bullet up her nose. That should prompt some kind of co-operation from yourself. I’m being rhetorical, you don’t need to answer. You have a laptop, don’t you?’

‘I have a bunch of laptops’ Trev responds. He works for PC Planet as part of the IT staff, and repairing computers is kind of his entire job description.

‘I have that laptop’. Trev remembered it because of how rubbish it was, and was amazed that anyone seriously wanted to repair a 200 quid laptop.

‘I’ll take that crushing silence as your complete compliance. I’m in 3298 Beetham Tower. I don’t need to tell you where that it do I?’

‘No.’ Trev whispers. Of course he didn’t. Beetham Tower is the solitary skyscraper that dominates the Manchester skyline, and, as Trev looks up from the phone to the windows, he can see Beetham Tower itself in the distance - right at the bottom of Deansgate, the road on the west of Manchester city centre which takes you from the top of the city to the bottom. Trev can see some of the lights on the skyscraper on, even at this hour, and he wonders which one is hosting the disastrous scene he can hear down the phone.

He sits motionless. To Trev it feels like he is sitting in a crater of despair, his world around him an awful catastrophic mess, with himself a broken epicenter.

He eventually puts the phone down, if only to drown out the mess. Then he reaches for his bag. He knows the laptop is in there, and he knows the consequences if he boots it up. He struggles and realizes he has no idea who he is dealing with. None at all.

He takes out the laptop, and it hits him: all this trouble for a rubbish little notebook. It was a piece of shit brand new, never mind now, he thinks. What could possibly be on there of such value? It’s hard drive is absolutely paltry - it’s not like you could even store anything of any note on there! Curiosity tugs and claws, and almost subconsciously, he finds himself pressing the power button.

Straight away, the screen flashes to life. The notebook had only been on sleep mode. The screen is dead - just blackness. Man, it really is busted, he thinks. He waits, in case it needs to boot up after all. After a moment, he notices the cursor, and he realises: this is the desktop and it doesn’t have a single icon on it. No picture, just a black background. He directs the cursor to the bottom, to bring up the start tab. Nothing.

He listens to the machine - sounds just fine, a familiar soft whirr. He just needs to get at the contents. He expertly enters the root file of the computer manual index, and boom, the doors open. There are things here, that’s for sure. No programs, just a series of text documents.

It strikes Trev as clever - a hidden library masked on the premise of a broken computer. The text document files all have names - girls first names. Trev feels a quake in his guts - immediately, he doesn’t like where this is going. He scrolls down a touch, and as he reads, sickness, revulsion, rage and horror blend a dangerous mix and swamp his thoughts.

John Wayne by Aissa Wayne, Steve Delsohn
BILLIONAIRE (Part 2) by Jones, Juliette
Butterfly by Rochelle Alers
The Chocolate Run by Dorothy Koomson
Gargoyle Quest by William Massa
Find Me in the Dark by Ashe, Karina
Impetus by Sullivan, Scott M
Hostage Nation by Victoria Bruce
The Pirates! in an Adventure with the Romantics by Gideon Defoe
The Callindra Chronicles Book One - First Quest by Benjamin Fisher-Merritt
Our partner