Read Beneath the Dark Ice Online

Beneath the Dark Ice 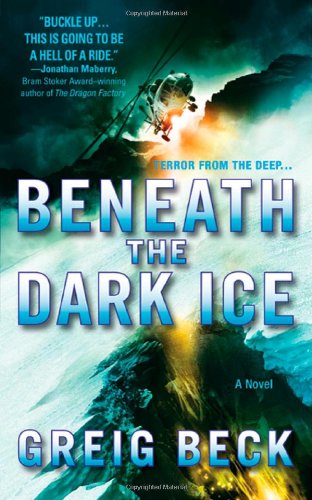 For Barbara, who still makes it fun
.

I want to thank my wife, Barbara Weir, whose eye for detail is second to none, my son Alexander for making me laugh every day, and Cate Paterson, Joel Naoum, and Nicola O’Shea for their editorial skill, patience, and good humour, and for showing me how to turn a story into a book. Thank you.

In 1996, Russian and British scientists discovered a warm-water lake two and half miles beneath the Antarctic ice. “Lake Vostok” as it has been named, is the size of Lake Ontario and biologists suspect that it may contain life forms that have been unseen on the surface for millions of years.

Hundreds of these hidden bodies of water are thought to exist all around the world.

The Colony of Roanoke Island, 1587

Eleanor cradled baby Virginia in her arms and smiled at the little pink sleeping face. She was the first baby born on the island and the colonists were delighted by her arrival, seeing it as a good omen for the new outpost.

Roanoke’s late spring sunshine bathed the new mother and baby in a warm comforting blanket as Eleanor sang a soft lullaby to her snuffling infant.

John White, Eleanor’s father and the island’s Governor, was proud of what he’d achieved. This was the golden age of colonisation for England and it looked to be another year where his homeland flexed its muscles and attempted to further expand its global domain. Earlier that decade, in 1583, Sir Humphrey Gilbert had claimed Newfoundland as England’s first overseas colony and now Roanoke was set to be the first English colony in the New World.

Governor White was making sure all was well before he reluctantly returned to England to collect more provisions. Roanoke Island was long and narrow, and lay just off the coast between the mainland and the treacherous Outer Banks of the Atlantic Ocean. White knew the surrounding waters were cold and an uninviting grey-green, as the freezing currents of the Atlantic encircled the twelve
miles of land. But thankfully the island itself was an oasis of dense marshes, low-grassed meadows and tall oak forests teeming with game.

The local Indians were on the whole a friendly but strange bunch, sometimes timid and at other times aggressive, shouting loudly at the colonists to warn them away from particular tracts of the forest. White found that as long as they stayed within certain areas of the island there was never any trouble. A sporadic but uneasy trading relationship developed and overall White was satisfied the indigenous population posed no threat to the group.

White’s main concern had been that the site of the settlement was not as secure as he would like from the heavy sea storms that kicked up out of the Atlantic. Their site was too close to the shoreline, and now that babies were being born, he was determined to ensure that no unplanned-for risks would endanger his new colony, particularly as he would be absent for months.

White had organised a small party of men to search the surrounding areas for naturally sheltered areas that could be retreated to in times of harsh weather. Within a week the men had reported back that they had found a large cave opening, and though there seemed to be an odd smell emanating from its depths it seemed well protected, dry and large enough for all one hundred colonists. White had ordered that water barrels be placed inside the cavern. Looking at the provisions, he hoped that he’d done all that was necessary to secure the colony and he turned to board his ship for the return to England.

Eleanor made her way down to a soft grassy spot beside the clear stream just outside of the settlement. She came to this part of the riverbank to wash Virginia’s tiny clothes and let them dry on the flat rocks beside the water. When
she met the young Indian girl, it seemed natural that they would become friends.

Incara, as Eleanor had learned was her name, came to the bank to do her daily chores around the same time, and it wasn’t long before a wave and a smile became an opportunity to sit together and show off their first-borns. Though neither could speak the other’s language they managed to communicate and connect as young, new mothers.

Eleanor pulled her shawl closer and looked up to the sky; dark clouds were racing across from the west and rain looked to be imminent. She rose to her feet with Virginia in her arms and made her farewell to Incara who smiled up at her and tried to mimic both the wave and the words. Eleanor giggled at the attempt; perhaps she would make Incara a dress, depending on how much fabric her father returned with.

The wind was rising quickly so Eleanor picked up her pace for the walk back to the colony. The horizon was now heavy with enormous purple clouds that threatened to burst like boils over the island. Just as she was entering the clearing at the very edge of the colony, Eleanor’s husband, Ananias, met her and pulled her into a quick embrace. He was out of breath and already his blond hair was plastered down from the large drops of rain that were beginning to fall. He shouted over the top of the screaming wind that she should gather as much food and clothing as she could carry as the colony was going to take shelter in the caves to the south of the island.

Already, the ferocious wind was picking away some of the thatch and wooden shingles from the cabins and flinging them like knives throughout the camp. The rain, catapulted by the strong wind gusts, was now stinging their faces as they made their way to the centre of the camp. Eleanor spotted Incara in the tree line looking extremely
agitated and motioned for her to come closer. Incara ran to her and tried to pull her away while vigorously shaking her head and gesticulating wildly in the direction of the caves. Over and over she repeated a word that sounded like “croatoan” with wide, imploring eyes. She made waving motions with her arms and hugged herself tightly. Oddly, this gesture did not seem to be an attempt to give an impression of trying to stay warm, but to impart a feeling of struggling or crushing.

Eleanor’s father had said that the local natives believed everything was the work of spirits, good and bad, and the weather was no exception. Eleanor gave her a quick hug and headed off to the cave with the last few colonists.

Incara had repeated the word
croatoan
so many times that Eleanor took it to mean the name of the caves they were heading to, and just in case they were still there when her father returned, she asked Ananias to carve the word into the large tree at the edge of the camp so her father or anyone wishing to know their whereabouts would only need to ask the Indians for directions.

Incara hurried back to her father, Manteo, the chief of the Roanoke tribe. He was consulting with his holy men around the fire in the centre of their hut and she fell to her knees in front of him, gasping out where the colonists were heading. Though the Roanoke were mostly indifferent to the settlers, they knew the dangers of the caverns. Generations ago the ground had shaken and opened the cavern to the light of the surface. Incara had heard the legends of the hungry caves and it had been many years since any young hunter had been foolish enough to venture into them. Those who had were never seen again.

The weather was now quite violent and tribal taboos forbade all Roanoke from venturing into or even near the caves. However, Manteo knew of the bond that had formed
between Incara and the white “Eleanor,” and Incara was greatly relieved when her father announced he would send his strongest warriors to try and stop the colonists. Against her father’s wishes, Incara went with them.

The small party of Indians made it to the cave just as the last of the colonists were disappearing inside and beginning to seal the entrance against the elements. Incara called out and was rewarded by both Eleanor and Ananias appearing briefly at the cave mouth. The image Incara and the warriors saw was one that would stay with them forever: Eleanor standing in the rain, cradling her baby daughter. As she smiled and waved goodbye to Incara, Ananias’s head snapped around as though he had been called and he raced back into the cave. Eleanor turned to look over her shoulder as shouts started to echo from the depths and then she too hurried into the darkness.

It was only a few short minutes before the screaming started and the moaning began. The sounds of pure animal fear and distress emanating from the cave made Incara sink to her knees and wail loudly. She grabbed handfuls of wet leaves and earth and covered her head and face in anguish. Even the brave Roanoke warriors were ashen-faced with fear as the screams rang out then were cut off one by one. Manteo stared into the cave for many minutes, remembering the ancient legends, knowing what they would mean to his people. He turned away from the cave, he had decided; they would leave the island immediately.

Bran New Death (A Merry Muffin Mystery) by Hamilton, Victoria
The Last Drive by Rex Stout
Love Handles by Galway, Gretchen
Be Frank With Me by Julia Claiborne Johnson
Poe's Children by Peter Straub
Magical Masquerade: A Regency Masquerade by Gilman, Hilary
State of Siege by Eric Ambler
Hearts Out of Time by Lange, Chris
Taking the Heat by Victoria Dahl
Heart-shaped box by Joe Hill
Our partner