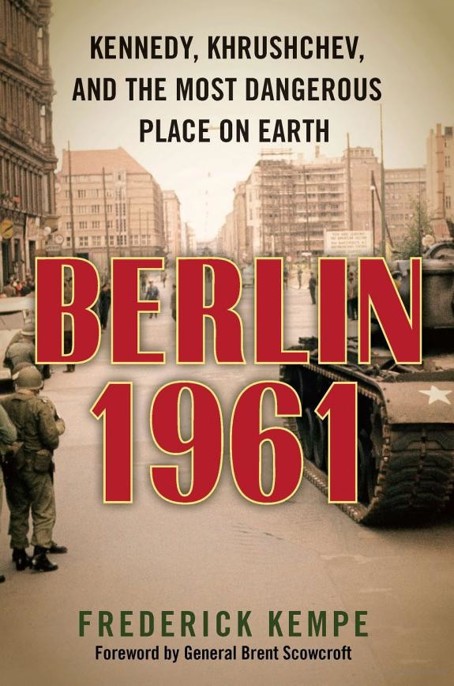 “As time passes and the political geography of world power mutates, it is easy to forget the most fraught and dangerous crisis of the Cold War, which brought U.S. and Soviet tanks facing each other at close range.
Berlin 1961
is a gripping, well-researched, and thought-provoking book with many lessons for today.”

“Frederick Kempe’s compelling narrative, astute analysis, and meticulous research bring fresh insight into a crucial and perilous episode of the Cold War, bringing Kennedy and Khrushchev to life as they square off at the brink of nuclear war. His masterly telling of a scary and cautionary tale from half a century ago has the immediacy of today’s headlines.”

“History at its best. Kempe’s book masterfully dissects the Cold War’s strategically most significant East–West confrontation, and in the process significantly enlightens our understanding of the complexity of the Cold War itself.”

“What an amazing drama this is! The showdown over Berlin in 1961 was the pivotal episode of the Cold War, far more important and illuminating than the Cuban Missile Crisis. It was a clash between two fascinating leaders, Kennedy and Khrushchev, whose misreading of each other holds lessons for today. Kempe’s compelling narrative is a triumph of great writing and research.”

—Walter Isaacson, president and CEO, The Aspen Institute, and author of
Einstein: His Life and Universe
and
Benjamin Franklin: An American Life

“An engaging, richly researched, thought-provoking book that captures the drama of, and challenges the conventional wisdom regarding, one of the Cold War’s most decisive years. Frederick Kempe combines the ‘You are there’ storytelling skills of a journalist, the analytical skills of the political scientist, and the historian’s use of declassified U.S., Soviet, and German documents to provide unique insight into the forces and individuals behind these events.”

“Fred Kempe has masterfully captured the dramatic dimensions of a great story that shaped the world order for twenty-eight years.
Berlin 1961
is an important achievement.”

“
Berlin 1961
takes us to Ground Zero of the Cold War. Reading these pages, you feel as if you are standing at Checkpoint Charlie, amid the brutal tension of a divided Berlin.”

“Informed…His chronology of memos and meetings dramatizes events behind closed doors…. Kempe’s history reflects balanced discernment about the creation of the Berlin Wall.”

“Kempe…skillfully weaves oral histories and newly declassified documents into a sweeping, exhaustive narrative…. Likely the best, most richly detailed account of the subject, this will engross serious readers of Cold War history who enjoyed W. R. Smyser’s
Kennedy and the Berlin Wall
but appreciate the further detail.”

“Good journalistic history in the tradition of William L. Shirer and Barbara Tuchman.”

“A significant contribution to our understanding of the Cold War. It also will enhance public appreciation of the role of diplomats and diplomacy, because
Berlin 1961
is as eminently readable as any good ‘who done it.’”

“An engaging study of the 1961 Khrushchev/Kennedy standoff over Berlin, presenting the drama in the journalistic, anecdotal, episode-by-episode mode…a readable narrative.”

KENNEDY, KHRUSHCHEV, AND THE MOST DANGEROUS PLACE ON EARTH

The Library of Congress has cataloged the G. P. Putnam’s Sons hardcover as follows:

Berlin 1961: Kennedy, Khrushchev, and the most dangerous place on earth / Frederick Kempe.

Introduction: The World’s Most Dangerous Place

PART I. THE PLAYERS

1. Khrushchev: Communist in a Hurry

The “Sniper” Comes In from the Cold

The Failed Flight of Friedrich Brandt

6. Ulbricht and Adenauer: The Tail Wags the Bear

14. The Wall: Setting the Trap

H
istorians have scrutinized the Cuban Missile Crisis of 1962 far more deeply than they have the Berlin Crisis that preceded it by a year. For all the attention given Cuba, however, what happened in Berlin was even more decisive in shaping the era between the end of World War II in 1945 and German unification and Soviet dissolution in 1990 and 1991. It was the Berlin Wall’s rise in August 1961 that anchored the Cold War in the mutual hostility that would last for another three decades, locking us into habits, procedures, and suspicions that would fall only with that same wall on November 9, 1989.

Furthermore, there was a special intensity about that first crisis. In the words of William Kaufman, a Kennedy administration strategist who worked both Berlin and Cuba from the Pentagon, “Berlin was the worst moment of the Cold War. Although I was deeply involved in the Cuban Missile Crisis, I personally thought that the Berlin confrontation, especially after the wall went up, where you had Soviet and U.S. tanks literally facing one another with guns pointed, was a more dangerous situation. We had very clear indications mid-week of the Cuban Missile Crisis that the Russians were not really going to push us to the edge….

“You didn’t get that sense in Berlin.”

Fred Kempe’s contribution to our crucial understanding of that time is that he combines the “You are there” storytelling skills of a journalist, the analytical skills of the political scientist, and the historian’s use of declassified U.S., Soviet, and German documents to provide unique insight into the forces and individuals behind the construction of the Berlin Wall—the iconic barrier that came to symbolize the Cold War’s divisions.

History, sadly, does not reveal its alternatives. However, Kempe’s important book prompts the reader to reflect on crucial questions regarding the Berlin Crisis that raise larger issues about American presidential leadership.

Could we have ended the Cold War earlier if President John F. Kennedy had managed his relationship with Nikita Khrushchev differently? In the early hours of Kennedy’s administration, Khrushchev released captured U.S. airmen, published Kennedy’s unedited inaugural address in Soviet newspapers, and reduced state jamming of Radio Free Europe and Radio Liberty broadcasts. Could Kennedy have more fully tested the possibilities behind Khrushchev’s conciliatory gestures? If Kennedy had handled Khrushchev differently at the Vienna Summit in June 1961, would the Soviet leader have balked at the notion of closing Berlin’s border two months later?

Or, on the other hand, as some have suggested: Is it possible that we should regard Kennedy’s acquiescence to the communist construction of the Wall in August 1961 as the best of bad alternatives in a dangerous world? Kennedy famously said he preferred a wall to a war—and there was reason for him to believe that was the choice that confronted him.

These are not small matters.

Another question raised by Kempe’s compelling narrative is whether we, in the richness of time, will look at the Cold War in a more nuanced manner than we do now. The Cold War was not simply a standoff against a Soviet Union bent on world domination; it was also driven by a series of self-reinforcing misinterpretations of what the other side was up to.
Berlin 1961
’s account of the miscommunication and misunderstandings between the United States and the Soviet Union at that crucial time makes one wonder whether we might have produced better outcomes if we had more clearly understood the domestic, economic, political, and other forces compelling our rival’s behavior.

These are speculative questions no one can answer with any certainty. Yet raising them in the context of
Berlin 1961
is as relevant to navigating the future as it is to understanding the past. In the pages that follow are clues and cautions that are particularly timely during the first term of another young and relatively inexperienced commander in chief, President Barack Obama, who, like Kennedy, came to the White House with a foreign policy agenda aimed at engaging our adversaries more skillfully and understanding more reliably what lurks beneath seemingly intractable conflicts in order that we can better solve them.

Into the Blackness (Blackness Series Book 4) by Norma Jeanne Karlsson
Full Disclosure (Homefront: The Sheridans Book 2) by Aster, Kate
Love's Fate (Love Trilogy #1) by Smith, Tracey
Act of God by Jill Ciment
IGMS Issue 29 by IGMS
Casually Cursed by Kimberly Frost
A Perfect Life by Eileen Pollack
The Master's Chair (The Chronicles of Terah) by Morgan, Mackenzie
The Quality of Mercy by Barry Unsworth
Bloom and Doom by Beverly Allen
Our partner