It began all smiles. (
Sovfoto
) 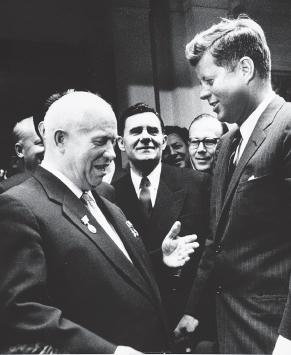 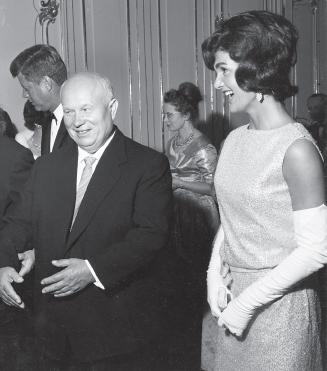 They broke for dinner at the Schönbrunn Palace, where Khrushchev was charmed by Jackie. (
USIA/JFK Library
) 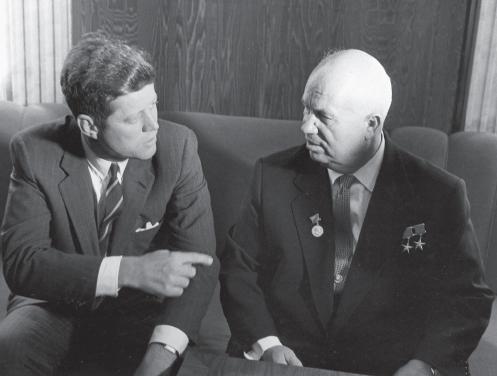 But the mood of the talks remained tense. At the end, Kennedy left feeling battered and defeated by the premier. (
USIA/JFK Library
)

*
In the 1990s, Peng would come to be considered one of “the Eight Immortals of the Chinese Communist Party.”

*
Powers was not released until more than a year later, on February 10, 1962, when he was exchanged on Glienicke Bridge in West Berlin for Colonel Rudolf Abel—the alias for the captured legendary Russian spy William Fischer, whose exploits were such that his face would later appear on a Soviet postage stamp.

*
It would be renamed Karl-Marx-Allee that November.

*
Dr. Jacobson would lose his medical license in 1975. Another patient of his, Kennedy friend Mark Shaw, died at the young age of forty-seven in 1969 as a result of “acute and chronic intravenous amphetamine poisoning.”

*
Thurow himself escaped to the West on February 21, 1962. As a deserter he thereafter was hounded by State Security; he evaded one confirmed order to murder him and at least one effort to kidnap him.

*
Schumann later settled in Bavaria in West Germany, where he met his wife. After the fall of the Berlin Wall, he said, “Only since 9 November 1989 [the date of the fall] have I felt truly free.” Still, he continued to suffer tensions with former colleagues and family in Saxony. On June 20, 1998, suffering from depression, he committed suicide, hanging himself in an orchard.

*
At the request of the former student, this book does not use his real last name.

*
Adenauer would resign in 1963, and Brandt would become the first Social Democratic chancellor of the postwar period in 1969.

Star Wars: Tales of the Bounty Hunters by Kevin J. Anderson
Everybody Has Those Thoughts So It Doesn't Mean You're Gay by Cristian Youngmiller
Zombie Dawn Apocalypse by Michael G. Thomas
Cemetery Road by Gar Anthony Haywood
Byzantine Gold by Chris Karlsen
Once Within A Lifetime by Rose, Phyllis Georgina
Some Like It Witchy by Heather Blake
Fall and Rise by Stephen Dixon
Soul Mates: Magic (Soul Mates Series) by Elizabeth A. Lance
The Modigliani Scandal by Ken Follett
Our partner