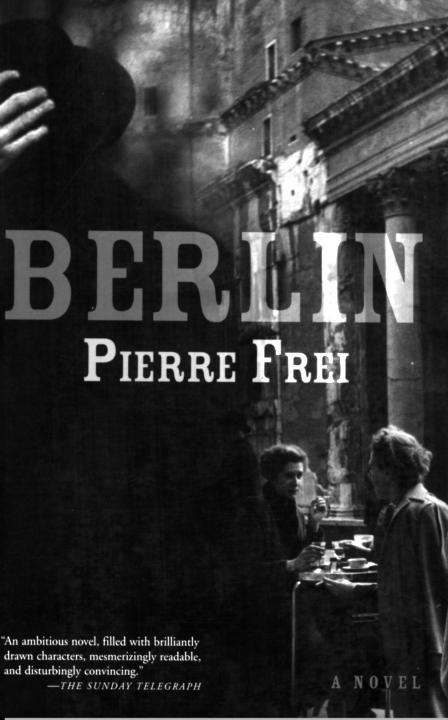 "As the blasted city is being carved up by conquerors. a killer on a motorbike is carving up blue-eyed blondes in the American sector. As the victims fall, their lives untold before our eyes ... a panoramic portrait of a nation seduced and raped by Hitler and his Reich."

"A winding and gripping whodunit . .. intricately woven and fantastically plotted ... It is engrossing, addictive."

"In this winning mix of mystery and history set in 1945 Berlin, Frei personalizes the horrors of war.... [He] maintains the suspense of whether the killer will claim another victim to the final pages. . . . Fine storytelling."

"Pierre Frei adopts the approach taken by Graham Greene in The Third Man, using a postwar setting made more difficult by divided military occupation. Berlin struggles to adapt to the uneasy peace. Rapacious victors possess the place physically (the Russians, with their policy of looting and rape) or by psychological means (the Americans with the superior rations and subtle fraternization), resulting in what the filmmaker Wim Wenders called the colonization of the German unconscious.... A jittery. feral sexuality adds to the [book's] foreboding.... Entirely readable."

"It's a serial-killer whodunit, but it's also a very funny tale of a young man's coming-of-age in postwar Germany, and a series of stories about life in the Third Reich told through the lives of women who lived-and died-there. What's most surprising is that Frei . . . manages to pull all this complicated plotting and character development together.... I found Berlin very engaging and liked the slow pace and careful characterization. Plus there's a neat twist. . . . Let's hope Frei decides to bring the Dietrichs back for another round."

-The Globe and Mail

"A gratifyingly original and surprisingly affecting crime novel ... I'd he hard pressed to name a better researched and more readable crime novel this year."

"Enormously exciting--your best plan is to keep a whole weekend free to read it all at once."

"Berlin by Pierre Frei begins a month after the Second World War has ended. The Allies have divided Germany's ruined capital, and in the American sector young blondes are being savagely murdered. At first it seems that this is going to be another police procedural, with a German detective teamed up with an American military policeman to hunt for the killer. But as the life story of each is told in a series of flashbacks, what emerges is a vivid picture of Germany as Hitler's followers tighten their grip on the country. It's an ambitious novel, filled with brilliantly drawn characters, mesmerizingly readable and disturbingly convincing."

"The stories of the murder victims, described in flashbacks, are fascinating, and the lively picture of the period, enriched with many details, rings true."

"Berlin takes us back to a very different capital in the aftermath of a very different apocalypse. In 1946 Berlin is under occupation by rival powers and hardened to killing, rape, and atrocity. Or so you would think. But when the killing resumes on an individual scale, there is a wholly different climate of horror. The victims are all young, beautiful, blue-eyed, blonde-haired women strangled with a chain and submitted to horrific sexual abuse. It is up to a German police inspector working with a group of American GIs to stop the serial killer. . . . In the end it is Berlin itself, the city and its inhabitants, meticulously observed and depicted, that emerges as the true star of the story, flawed, cruel, seductively engaging and all too human. This is its best evocation since Len Deighton's Winter."

"Frei's real strength lies in the presentation of his characters. After each young woman's murder, her life story is described. The result is a fine novel of Berlin, set against the background of German political history." -

"[Berlin is] set in occupied Berlin, where a serial killer targeting young women is on the loose.... With each woman's death we spiral back in time, learning about her life and the journey that led her to a lonely railway station or back street. The women's compelling stories run through the book, giving readers a sense of life before and during the war, and their struggles to face the ruin around them, until the killer snuffs out their lives."

"Life is anything but peaceful in postwar Berlin when a serial killer is on the loose. Young, blonde, and beautiful women are at risk as the killer lurks in the vicinity of Uncle Tom's Cabin underground station.... Each victim has a story to tell: Karin, a small-town girl turned film star was wooed by Hitler propagandist Joseph Goebbels; Helga fought to protect her handicapped child from the Nazis; Henrietta was an aristocratic diplomat; and Marlene was a high-class prostitute who got married to a high-ranking Gestapo officer. The fifth target, Jutta, has already escaped one attack. Will the authorities stop the killer in time to save her?"

Translated from the German by Anthea Bell

Copyright (0 2003 by Karl Blessing Verlag, a division of Verlagsgruppe Random House GmbH, Munchen, Germany Translation copyright Cc°© 2005 by Anthea Bell All rights reserved. No part of this book may be reproduced in any form or by any electronic or mechanical means, or the facilitation thereof, including information storage and retrieval systems, without permission in writing from the publisher, except by a reviewer, who may quote brief passages in a review. Any members of educational institutions wishing to photocopy part or all of the work for classroom use, or publishers who would like to obtain permission to include the work in an anthology, should send their inquiries to Grove/Atlantic, Inc., 841 Broadway, New York, NY 10003. First published in Great Britain in 2005 by Atlantic Books, an imprint of Grove Atlantic Ltd.

Originally published in Germany in 2003 by Karl Blessing Verlag, Munich, as Onkel Toms Hutte, Berlin. This novel is entirely a work of fiction. The names, characters and incidents portrayed in it are the work of the author's imagination. Any resemblance to actual persons, living or dead, events or localities, is entirely coincidental. Printed in the United States of America

THE BOY NEVER took his eyes off the soldier. The American removed the last Lucky Strike from its packet and tossed the empty wrappings on the tracks. He lit the cigarette and waited for the U-Bahn train coming in from Krumme Lanke station to stop. If the Yank was going only one station up the line to Oskar-Helene-Heim, he'd throw the half-smoked cigarette away as he got out, it would fly through the air in a wide arc, and the boy could retrieve it.

A dozen cigarette butts of that length, once the burnt end had been neatly trimmed away with a razor blade, would earn him forty marks. But if the Yank was travelling further the prospects weren't so good, because then he'd probably tread out that coveted cigarette on the floor of the car or chuck it out of the window, which was open in the summer weather. Yanks were entirely indifferent to such things.

With equal indifference, the US Army quartermaster had ordered that a square mile around the Onkel Toms Hiitte U-Bahn station was to be fenced in with barbed wire, leaving only one narrow passage available to German passengers for access. The shopping streets on both the longer sides of the station were off limits too, and had become a centre for the soldiers billeted in the requisitioned apartment buildings around it.

Decades before, the landlord of an inn frequented by people going on excursions to the nearby Grunewald had called his establishment after Harriet Beecher Stowe's affecting novel, Uncle Tom's Cabin, and the Berlin Transport Company adopted the name for the new U-Bahn station built in late 1929. 'Uncle Tom' soon became familiar to the American occupying forces when they arrived in 1945.

The U-Bahn train stopped. The Yank boarded it, cigarette in the corner of his mouth, and slouched against one of the upright poles you could hold on to. Another passenger followed him in and closed the door. The railwayman in the middle of the platform raised his signal disc. The conductor at the front of the train knocked on the window of the driver's cab to pass the message on, and swung himself up into the car as it started moving.

The boy watched the train leave. He had decided not to pursue the cigarette end. As soon as the stationmaster with the signal disc turned his back, he jumped down on the tracks to salvage the empty cigarette packet.

The stationmaster's head appeared above him. 'What d'you think you're doing down there?' he barked.

'Found any?' The man was thinking of his own empty pipe.

'No cigarette ends. Only a dead woman.' The boy pointed casually to something beside the tracks.

The stationmaster sat on the edge of the platform, put his disc down and lowered himself, grunting. Two slender legs in torn, pale nylon stockings were sticking out of one of the side bays which, if you bent double, enabled you to reach the cables below the platform. The feet were shod in brown, high-heeled pumps with white leather inserts, currently the latest fashion in the USA. The white inserts bore dark-red splashes of blood.

'She's American. Go get the Yanks.' The man clambered back up on the platform and hurried to his booth, where he took the receiver off its rest and cranked up the phone. 'Krumme Lanke? Onkel Tom stationmaster here. We got a dead woman under platform one. Stop the trains coming through from your end. Message over.'

Hearts of Darkness by Paul Lawrence
To Love a Bear by Kay Perry
This Matter Of Marriage by Debbie Macomber
Immortally Ever After by Angie Fox
Unlikely Love: A Romance Single by John, Ashley
The Annotated Milton: Complete English Poems by John Milton, Burton Raffel
The Nerd Who Loved Me by Liz Talley
Shining On by Lois Lowry
Ares: (Gods of Old Book 1) by April Zyon
The Art of Deception: Controlling the Human Element of Security by Kevin D. Mitnick, William L. Simon, Steve Wozniak
Our partner