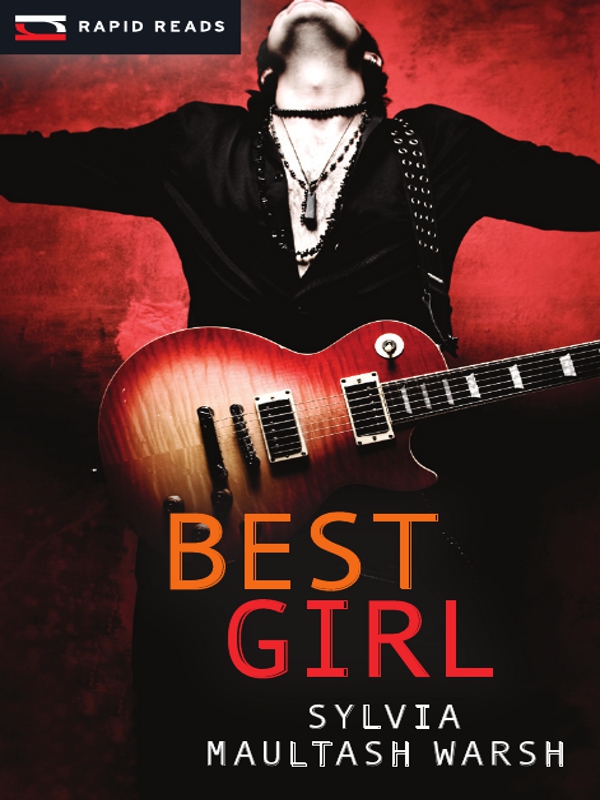 Summary: A young aspiring musician's life is turned upside down when she begins to learn the truth about her long-dead parents. (RL 2.6)

Orca Book Publishers is dedicated to preserving the environment and has
printed this book on paper certified by the Forest Stewardship Council
Â®
.

For Jerry, as always.
And for my muses, Nathaniel and Jessica.

M
y life changed on October 23, 2010. Suddenly I didn't know who I was. Before the phone call, here's what I knew: I was adopted. My real parents died in a car crash when I was four. Shelley was the only mother I've ever known. As soon as I could understand, she told me I was adopted. Shelley's husbandâI never thought of him as my fatherâwasn't home much. When he lost his job, he went out west to work in the oil fields.

I didn't have a lot of friends. It was mostly Shelley and me. I always cared too much and didn't want to get hurt. Because people let you down. People are liars.

All the time I was growing up, Shelley and I argued. She never saw things my way. Then she could stay mad for days and not speak to me. In the end she'd be all lovey-dovey, as if nothing had happened. When I was a kid, I was always relieved when she started talking again. It was hard living with someone who ignored you. Once I was a teenager, though, I didn't mind being left alone. When she saw it didn't bug me, she gave up the silent treatment.

The best thing she ever did for me was make me take piano lessons. She said her own family was too poor to pay for lessons when she was a kid. Her mother laughed when she asked for them and said she was too stupid to play piano.

Shelley loved listening to music (mostly bad music). She couldn't hold a tune. To her, musicians walked on water.

Where she got the money for the piano I never knew. It's been there since I can remember. When I was young, I hated practicing. I was always a little rebel. Anything Shelley wanted, I didn't. So she made me feel guilty. Her usual lineâif she could scrounge together the money for lessons, the least I could do was practice. She found a music student a few blocks away who charged less than the going rate, but it was still a lot of money for a hairdresser. She said she had to cut and style two heads of hair to pay for one hour of lessons. Sometimes we ate Kraft Dinner to make up for it.

So I pouted while practicing my scales, up and down, up and down the keys. Until I realized I was good at it. Then I just
pretended
to hate it. Shelley didn't understand why the piano teacher started me on Mozart and Bach. “Doesn't the teacher know any Billy Joel or Phil Collins?” she'd ask. I'd roll my eyes and say, “She's teaching me music that doesn't suck.” I stopped piano lessons when I was fifteen because I got interested in the guitar. My voice wasn't bad either. But I only sang when Shelley wasn't home.

The radio in her hair salon was stuck on the “easy listening” channel, so those old songs were background music while I was growing up. They made me want to hurl. Even going into
Shelley's
, the salon she owned on the Danforth, made me want to hurl. It was old and dingy and badly needed a facelift. Her customers were old too. When I was younger, some of them would comment on how I didn't look anything like Shelley. I took that as an insult because Shelley was hot. Tall and thin with a long neck. Her ears were perfect little shells with earlobes. I was always jealous of her ears because mine were ugly. They were big and flat with thin round edges like clamshells. And no earlobes! She laughed when I complained, and said no one would notice my ears if I wore my hair long.

I thought Shelley would be happy when I told her I wanted to sing with a band. But she wasn't. It seemed to make her nervous. And I didn't even tell her I would be playing guitar, not piano, for accompaniment. She said I needed to make a living, so she taught me to cut hair. I fought at first, but then I started to like it. I had complete control over someone for an hour. They sat in my chair and they couldn't move. Not if they wanted a really cool haircut. Shelley showed me how to dye hair, and after that I was the only one she trusted to do hers. She liked to change her hair color with the season. I dyed it a streaky blond for the summer.

Then I pulled the rug out from under her feet. Without telling her, I registered for an apprentice job at a salon in Yorkville where the customers had style. I had to take classes in a hair school for a couple of hours a week too. The boss liked me and printed out some business cards with my name. Shelley was mad, but impressed with the cards and the snazzy address.

I hadn't told her ahead of time because I knew it would be a hassle. She'd yell and call me ungrateful. Maybe I was. But I wanted more than
Shelley's
salon. She was really mad when I moved outâbut hey, I was twenty-three! Now that I was making my own money, I could afford a studio apartment near the subway. I was
so
out of there. Couldn't live with her anymoreâshe was a control freak. Okay, so we both had control issues. Even so, last month I came to her shop on a Sunday to dye her hair mauve-red for the fall (her choice). She was almost fifty but looked good for her age.

But back to the phone call. A woman named Diane called, asking for Amanda Jane Moss. That was me.

“How do you know Shelley?”

“I mean your real mother.”

“She asked me to give you something. Can I come by this afternoon?”

“There's some mistake. My mother died twenty years ago.”

I was speechless. This was the first time I'd heard my birth mother's name. Shelley always said the agency wouldn't tell her who my parents were, only that they had died in a crash.

Then she said, “I'm sorry to have to tell youâCarol died last week. It was cancer. I'm so sorry.” There was a pause. “Please tell Shelley.”

In a daze, I gave her my address. Why did my mother give me away? She was alive all this time! It was like a knife in my chest. I could've met her.

It was Monday, so I had the day off. I stewed for half an hour, getting madder and madder. Then I called Shelley.

“What're you talking about?”

“You lied to me! About my mother.”

I felt the shock over the phone. I knew her too well. After my father left for the last time, there were just the two of us.

“Who told you that?”

“She was alive all these years and you didn't want me to meet her.”

“No, no, that's not true. You don't understandâ¦Iâ¦I was trying to protect you.”

“There are some thingsâ¦better not to know.”

That was just like her. “I'll never meet her now.”

“What're you talking about?”

A long pause. “It's better that way.”

“That's a horrible thing to say.”

I heard a sharp intake of breath. Good.

“I didn't tell you becauseâshe was evil.”

I slammed down the phone.

Rainbow Blues by KC Burn
Letters From Hades by Thomas, Jeffrey
The river is Down by Walker, Lucy
El Fuego by Katherine Neville
Battle of Hastings, The by Harvey Wood, Harriet; Wood, Harriet Harvey
Star Gazer by Chris Platt
Left at the Mango Tree by Stephanie Siciarz
Pocketful of Pearls by Shelley Bates
Emprise by Michael P. Kube-McDowell
Confessions of a Virgin Sex Columnist! by Kay Marie
Our partner