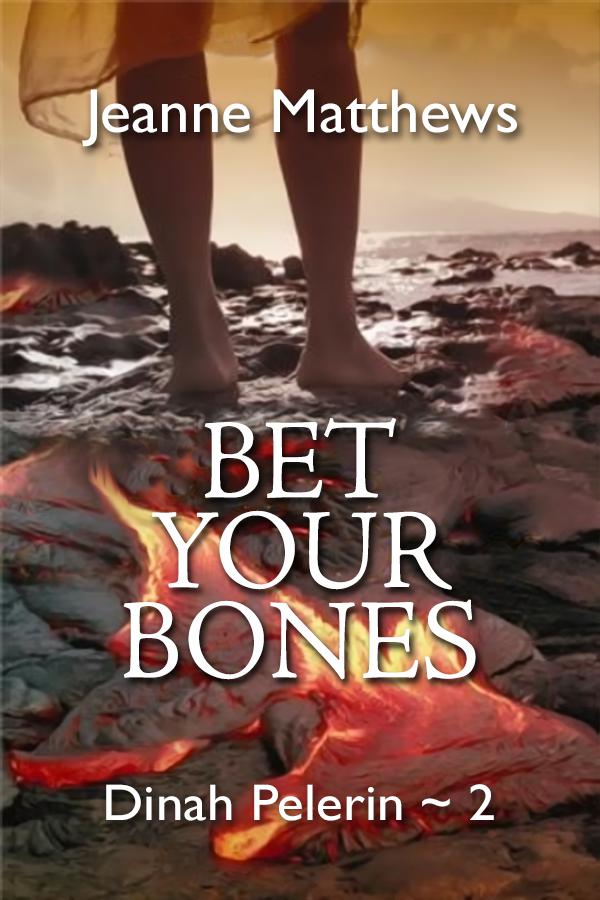 A wedding on the lip of a Hawaiian volcano sounds risky to Dinah
Pelerin, the bride's best friend and maid of honor. The bride, Claude
Ann Kemper, has bet her heart that she's found the right man at last.
The groom has gone all in on a real estate deal he believes will set
him and his new wife up for life. A group of Native Hawaiians claims
that the sacred bones of an ancestral king are buried on the land the
groom plans to sell and one of them has vowed do whatever it takes to
stop him. Claude Ann's ex-husband is stalking her and rigging
booby-traps. A blackmailer is conspiring to cash in on the groom's
suspicious past. And Pele, the local fire goddess, is rocking the island
with a series of earthquakes. It seems as if the stakes can't get any
higher. And then somebody shoves a member of the wedding into a flow of
molten lava and all bets are off.
True friendship is never
easy and Dinah and Claude Ann have had their misunderstandings. But
when danger threatens, Dinah is determined to protect her friend and
repay the loyalty Claude Ann has shown to her if she has to walk
through fire to do it. Hawaii is a hotbed of ancient myths and modern
conflicts over who should control the land so cherished by its native
people. If Dinah and Claude Ann are to get out alive, they'll have to
face down an angry goddess
and
a ruthless killer.

Thanks to my editor, Barbara Peters,
for her help in shaping the story,
and for their ideas and encouragement, I thank Joe Winston,
Jeanne Kleyn, Gail Boyer Hayes, Sal Gordon,
Pat Snider, Dianne Eret, and
most especially, Sid.

The myths recounted in this book came from the following sources:

Hawaiian Legends of Ghosts and Ghost-Gods
, collected and translated from the Hawaiian by W.D. Westervelt, Boston, Ellis Press (1916).

Unwritten Literature of Hawaii, The Sacred Songs of the Hula,
by Nathaniel B. Emerson, A.M., M.D., Charles E. Tuttle Co., Inc. (1965). Originally published by the Bureau of American Ethnology in 1909.

Materials found in the Bishop Museum, The State Museum of Cultural and Natural History, Honolulu, Hawaii.

On Mauna Loa, the greatest of the Hawaiian mountains, lived Kane-ia-kama, a high chief and an incorrigible gambler. Whenever and wherever the game of konane was played, he bet. Eventually, he gambled away all of his wealth until he had no possessions left. One night while he was sleeping, he dreamed that the voice of a god called out to him from the forest. “Try your luck again, Kane-ia-kama. Challenge the villagers to a game and play the black pebbles.”

But Kane-ia-kama cried, “I have nothing left. My treasures are all lost.”

On the Philippine island of Mindanao, there are shamans who divine the future by drinking the blood of a freshly slaughtered hog. This supposedly conjures the Spirit of Prophecy, which warns of any trouble looming on the horizon. At an altitude of 30,000 feet over the Pacific Ocean, Dinah Pelerin was forced to rely on the oracle of microwaved sausage links and Bloody Marys. The Spirit didn’t speak to her, but she foresaw only too well the trouble that lay ahead of her: the bride would wear white; the groom would wear black; and she, the reluctant maid of honor, would wear the onus of guilt she’d worn for ten years running. A secret guilt dressed up in—she consulted the letter again—tangerine chiffon, for crying out loud.

Having spent the last two months on Mindanao studying the customs and beliefs of the indigenous tribes, Dinah had picked up the habit of watching for omens. In the Philippines, everything was an omen. Dropping your purse was an omen. It boded poverty. Taking a shower too soon after ironing boded a wrinkly face. Falling asleep with wet hair boded blindness. Dinah wasn’t irrational enough to believe these particular superstitions. But playing maid of honor twice for the same bride gave heightened meaning to the word ominous.

She had cordoned off the memory of Claude Ann’s first wedding as if it were a crime scene. Whenever she and Claude Ann spoke, neither alluded to that tearful day ten years ago or to the series of misunderstandings and missteps that led to the altar. Dinah never asked and Claude Ann never reported on the state of her marriage. But it had lasted for a decade and Dinah was beginning to think that, just maybe, Claude Ann had drifted into a life of domestic contentment. Until now. Until out of the blue, Claude Ann had written to say that she was divorced, reengaged, and set to plunge down the aisle again with a man she’d known for barely six weeks. The ceremony was planned to take place on the last day of June on the Big Island of Hawaii. On the lip of a volcano.

Dinah added another splash of vodka to her tomato juice. The volcano sounded like a bad omen.

“Three more hours,” said her seatmate. “We’ll be in Honolulu by supper time.” She was a plump, intense looking Filipina who’d been working Sudoku puzzles ever since they boarded in Manila. Apparently, she’d grown bored with number crunching and wanted to chat. “Are you on your way home?”

“No. I’ve never been to Hawaii. Do you live there?”

“I wish. I’m visiting my sister. You’ve got a funny accent. Where do you come from?”

It was the second Bloody Mary, thought Dinah. Alcohol had a way of exposing her Southern roots. “The U.S. Georgia, actually. But I’ve been away for a long time. I’m an anthropologist.” It must be nerves that made such a lie jump out of her mouth. Well, it wasn’t a total lie. She was an aspiring anthropologist. Just because she wasn’t employed by some university or other didn’t mean she wasn’t doing anthropology. She’d sweet-talked two professors from Emory into letting her tag along on their Mindanao expedition, hadn’t she? She said, “My specialty is myths.”

“Thanks. I’ll look into them.”

“You ever hear of Pele?”

“I’ve read some of the legend.” Pele had figured in one of Dinah’s college courses, something about the significance of oral literature in the development of preliterate cultures. The early Hawaiians believed that Pele created the volcanoes and they worshipped her with chants they called meles and a risqué dance they called the hula. “She was a fire goddess, right?”

“Was? Don’t you believe it. Her spirit still lives inside Kilauea Volcano. My sister, the one I’m visiting, she says Pele’s been real angry the last few weeks. Lots of tremors and Kilauea hissing and spitting all the time.”

“Which island is Kilauea on?”

“Hawaii, the Big Island. It’s growing bigger every day from all the lava spilling out of Kilauea.”

Frowning, Dinah skimmed Claude Ann’s letter. Had she dropped the name of the volcano beside which she’d be tying the knot? Of course, not. How like Claude Ann to specify the color of the dresses and neglect to mention an erupting volcano.

“A man fell in a steam vent and got cooked just last week down near Ocean View. My sister sent me the news clipping.”

Dinah shuddered. “Was he hiking?”

“Nobody knows where he came from or where he was going. No car, no ID. He had a head wound and some broken bones. It’s kind of a mystery. The police thought he might have been the victim of a hit-and-run and he stumbled into the vent trying to go for help. Most likely he was drunk or he wouldn’t have been crossing the road in the middle of the night.” The woman pointed at the empty vodka bottles on Dinah’s tray table. “Pele likes booze, too. If you go to Kilauea, you can stay on her good side by leaving her a bottle of gin.”

Dinah couldn’t decide if she’d been warned or insulted. She didn’t reply.

The woman went back to her Sudoku. Dinah polished off her Bloody Mary and brooded. In spite of the miles that had come between them and the taboo subject of Claude Ann’s marriage, Dinah and Claude Ann had remained best friends since they were children. They had grown up together on the edge of the Okefenokee Swamp in Needmore, Georgia, a town whose name summed up its cultural opportunities to a tee. Needmore needed more of everything except scandal, which Dinah’s family bestowed upon the community the way some families bestow monuments and museums. After her father flipped his pickup and died under a half-ton of marijuana, the Pelerins became pariahs. If it hadn’t been for Claude Ann’s love-me-love-my-dog loyalty, Dinah would’ve been the leper of Needmore High. Wussing out of her wedding, however uncomfortable or close to a spitting volcano, wasn’t an option.

“I got to stretch my legs,” said her seatmate, folding her tray table and standing up. “Got to watch out on a long flight or you’ll get blood clots.” She straightened her back and toddled toward the rear of the plane.

Dinah never ran short of things to watch out for. Or people. She reread Claude Ann’s description of the groom-to-be. His name was Xander (“short for Alexander”) Garst. He was a “super brainy scientist with a phenomenal personality, an absolutely to-die-for house on the Big Island, and two children from a former marriage.” She raved for half a page about his drop-dead great looks, his sophisticated manners, and his fabulous sense of humor.

That last trait was a welcome twist. Heretofore, Claude Ann’s cup of tea hadn’t included a sense of humor. She’d never shown much of an interest in science either, not that having similar interests was a prerequisite to marital happiness. Sometimes, opposites really did attract. Anyway, sex trumped everything, at least in the beginning. Dinah hoped with all her heart that this new bird was Claude Ann’s Mr. Right. But whether he turned out to be a dreamboat or a disaster, no way could Dinah be blamed. This time, the nuptials would be one hundred percent on Claude Ann’s head.