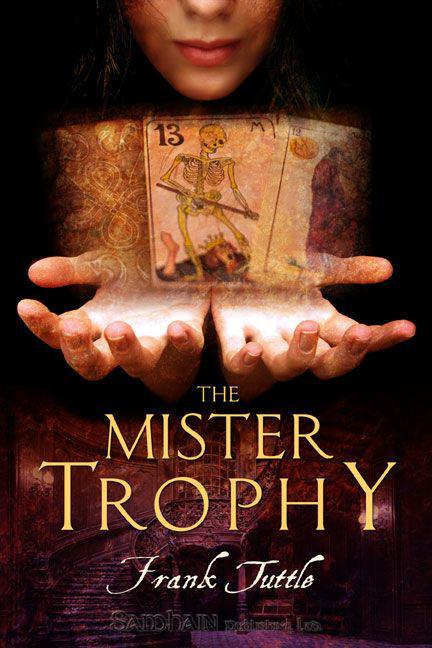 eBooks are
not
transferable.
They cannot be sold, shared or given away as it is an infringement on the copyright of this work.

To anyone who just bought this book, thank you, I hope you enjoy it. Also to my good friend John Worley—Hats and Gats lives, buddy, and we’re on the case!

Eddie the barkeep stared at the Troll and then at the “Dead Troll Tavern” emblem carved into the bar-top and then back at the Troll. The Troll grinned. Forty-eight finger-long incisors popped out, sharper and shinier than anything Eddie might have hidden behind the bar and dripping with poisonous Troll saliva to boot.

Eddie deftly dropped his drying rag on the Dead Troll carving, wiped his grubby hands on his equally grubby apron and donned a shaky tough-guy scowl. “Yeah?” he said to the Troll. “You want something?”

The Troll boomed something back. A second later, Kingdom words rang out in a flat male human voice. “I come for the finder Markhat.”

I choked on my beer. The Troll’s neckless head swiveled, owl-fashion, to face me. It gargled more words in Troll, and its translator spell spoke again. “You are the finder named Markhat.”

The Troll glided over, flashing me that mouthful of nightmares smile. “I was told you would deny your name,” it said. “Shameful. I am—” The Troll spoke its name, and the translator gave up, leaving me with the sound of dishwater gurgling down a sink-drain.

“Honored to meet you, Walking Stone,” I said, as the Troll reached my table. “May your shadow fall tall and your soul grow to meet it.” I rose, my knowledge of Troll etiquette nearly exhausted. “I am not he that you seek, though, and anyway I hear he married a centaur and retired to the Fiti Coast. Why don’t you finish my ale and—”

The Troll’s grin split wider. It made a very human gesture for silence, finger at lips, and then it pulled back its greatcloak just far enough to reveal three fist-sized chunks of shiny solid gold on a fat wrought silver chain. Trolls don’t value gold themselves, but they do use it to barter with the other races. Word is that Trolls don’t haggle; they just stack money in big piles until someone says “yes”.

I sat down. Hard. The Troll shoved a rickety chair aside and squatted on the floor across from me.

“I live three blocks from here,” I replied. “So, I suppose, I walked fifteen minutes and drank two beers and sat on cousin chair.”

The Troll’s translator choked my words slowly out. The bar cleared, except Eddie, whose right eye—the blue one—hovered unsteadily behind a wide crack in the storeroom door.

The Troll barked and gurgled. My hackles rose, though I recognized booming Trollish laughter. “You jest with me, Finder Markhat,” it said. “You are brave. I admire bravery.” It leaned closer, yellow slitted owl-eyes narrowing. “I pay well for bravery.”

I shook my head. “Someone usually does, Walking Stone,” I said. “Just how much bravery are you wanting to buy?”

“You will go to a place I shall name,” said the Troll. “You will contrive to be admitted therein, and you shall determine if a certain object is displayed there. If so, you shall communicate my message to the masters of the place.”

Boots scuffed at the door, but hushed voices warned them off and Eddie lost another customer.

“This isn’t very private, Walking Stone,” I said. “And before I say yes or no, I need names. What place, what masters and what object?”

The Troll leaned close. My hair tried to stand on end. I’d been that close to a Troll only once before, twenty years ago. If a fat Marine sergeant hadn’t put a harpoon through its skull, I’d be laid out with the other war heroes up on the Hill.

“The place is called Haverlock, Finder,” whispered the Troll’s translator. “Its masters bear the same name. The object is a trophy taken during the War. A head, stuffed and mounted. A Walking Stone head.”

I finished my beer. “What’s the message, Walking Stone?”

The Troll grinned again. “You have what is ours,” he said. “Return it. With apologies. At once.”

“And you think they’ll just pry it off the wall and hand it to me?”

The Troll’s toothy grin got wider. “Most assuredly yes.”

I shook my head. “Do you know who and what the Haverlocks are, Walking Stone?”

“I know they are rich. And powerful.”

“There’s only one way to be rich and powerful in Rannit these days,” I said. “The Haverlocks are night people. Half-dead. Vampires.”

The Troll’s eyes narrowed. “You know this as fact, Finder?”

“I haven’t been bitten by a Haverlock personally, no,” I said. “But they own a mansion in the Heights and they wear a lot of black and they don’t get much sun. Also, old man Haverlock showed up as a hero right after the War and he hasn’t gotten any older.”

The Troll made grumbles. “I thought your people hated and feared such creatures.”

“We did. Then they won the War for us and promised to behave.”

“And have they?” asked the Troll. “Behaved?”

“They stay in their houses from sunup to sundown. We stay in ours after curfew. They don’t break into our bedrooms at night and we don’t spend our lunch breaks putting stakes between their ribs. It’s worked so far.”

“And after sundown—on what do they feed?”

“The brave,” I said, rising. “The brave, the stupid and maybe the occasional wandering Troll.”

“Will you accept my offer?” said the Troll.

“Why me?” I asked. “Why not just go yourself? The Haverlocks are a lot more likely to play nice with a mighty Troll warrior than a third-rate Finder from the wrong side of the river.”

“If I were to go to Haverlock and see the bones of my kin decorating a wall, Finder,” said the Troll, “I would be honor-bound to slay all of the Haverlocks and a certain number of their kin. That would be—” the translator halted, struggling for words “—time consuming.”

Then it erupted in Trollish laughter, which sounds like thunder with a head cold. Eddie hastily took his peeking blue eye elsewhere. I pulled out a pair of jerks—more than I owed Eddie for my drinks, but my presence had cost the man business—and slammed them down on the table. “All right,” I said, rising. “It’s still daylight. I’ll go to Haverlock and contrive to poke around. You won’t owe me if I come up empty.”

The Troll blinked, which is the Troll way of nodding in agreement.

“And I’ll need another name for you, Walking Stone,” I said. “Melodious though yours is, I can’t pronounce it without a tight boot and a mud-hole.”

The Troll rose, knees bending in that backwards flex that looks awkward until you see one make a thirty-foot leap. “You may call me Mister Smith,” said the Troll, to a deep bass rumble I took to be chuckling. “Mister Bill Smith.”

“Pleased to meet you, Mister Smith,” I said. I even threw in courtly bow, just to dispel those rumors about Markhats and bad manners. The Troll responded with another chuckle. I dodged tables, grabbed my coat and opened the door. “After you.”

A pair of Watchmen trotted through the open door. They saw Mister Smith, executed a pair of perfectly timed about-faces, and were back out on the street before the Troll could grace them with a toothy Troll smile.

“Thanks for stopping by, boys,” I said to their rapidly vanishing backs. “Where would we be without law and order?”

Mister Smith ducked under the door and I followed in his wake. Artifice Street—nobody calls it the Street of the Artificers anymore but old folks and the Historic Preservation Society—was empty. No nibble vendors, no ladies of the afternoon, no dark-eyed bands of teenage vampire wannabees out to break the Curfew and maybe get just dead enough to live forever. I frowned and froze.

Mister Smith’s head swiveled my way. “Is something amiss, Finder?” he said.

“Something cleared the street, Mister Smith,” I said. “Could it be you brought friends along?”

The Troll chuckled. “Only two,” he said. “Three is customary number for quests, even among the folk of your legends, is it not?”

I sighed. “I can’t go marching around the Heights with a Troll army at my heels. Why don’t you boys wait in my office while I visit the rich folks?”

“Agreed,” said Mister Smith. Then he burped out something short and loud in Troll. I didn’t need any magic translator to catch the bark of a sergeant behind the words.

One Army is rather like any other, I suppose.

A pair of Walking Stones trundled out of the alleys flanking us. “Mister Jones will stroll on ahead,” said Mister Smith. “Mister Chin will follow, to deter mischief.”

I shrugged. “Why not? We haven’t had a parade in this neighborhood since the Truce. Wish I had a tuba.”

Mister Smith laughed and did a little skip over a pile of horse flop. Doors and street level windows banged shut as we passed; higher up, wide-eyed faces shone and gaped.

We turned the corner at Holt; it, too, was empty, except for trash scampering by on the wind and crows picking at sweetmeats dropped by people in a sudden hurry.

If you look down Holt Street, over the factories and the smokestacks that line the Brown River, you can just see the top stories and slate rooftops of the manor houses that huddle together on the Heights. I wondered if this is what all of Rannit will look like, in a hundred years—deserted and dead during the day, while those withered, pale forms in the Heights sleep and dream thirsty dreams of sunset.

Mister Smith chuckled. “Penny for your thoughts,” said his translator, a hint of mischief in its tone.

I shook off the chill and picked up the pace.

It’s a tight fit, but three full-grown Trolls will fit in my office. I shoved all the furniture against the walls, opened my single barred window and told the Misters I’d be back before dark.

I didn’t even bother locking the door. I just waved to the suddenly nonchalant crowd of gawkers that were beginning to gather at the corner and stepped next door to Mama Hog’s card-and-potion shop.

I raised my hand to knock; she opened the door before my hand could fall. It’s her best trick, and it probably sets the rubes to oohing and aahing, but it saddens me to think she stands there all day peeking through tattered curtains just so she can pull off that one little shred of mystery.

Sunlight barged past her open door, fell on shelves crammed with dusty, foul-smelling glassware, a moldy stuffed owl on a wobbly three-legged table and, of course, Mama Hog herself. The sunlight stopped there, and I didn’t blame it. Mama Hog isn’t pretty like Trolls aren’t petite.