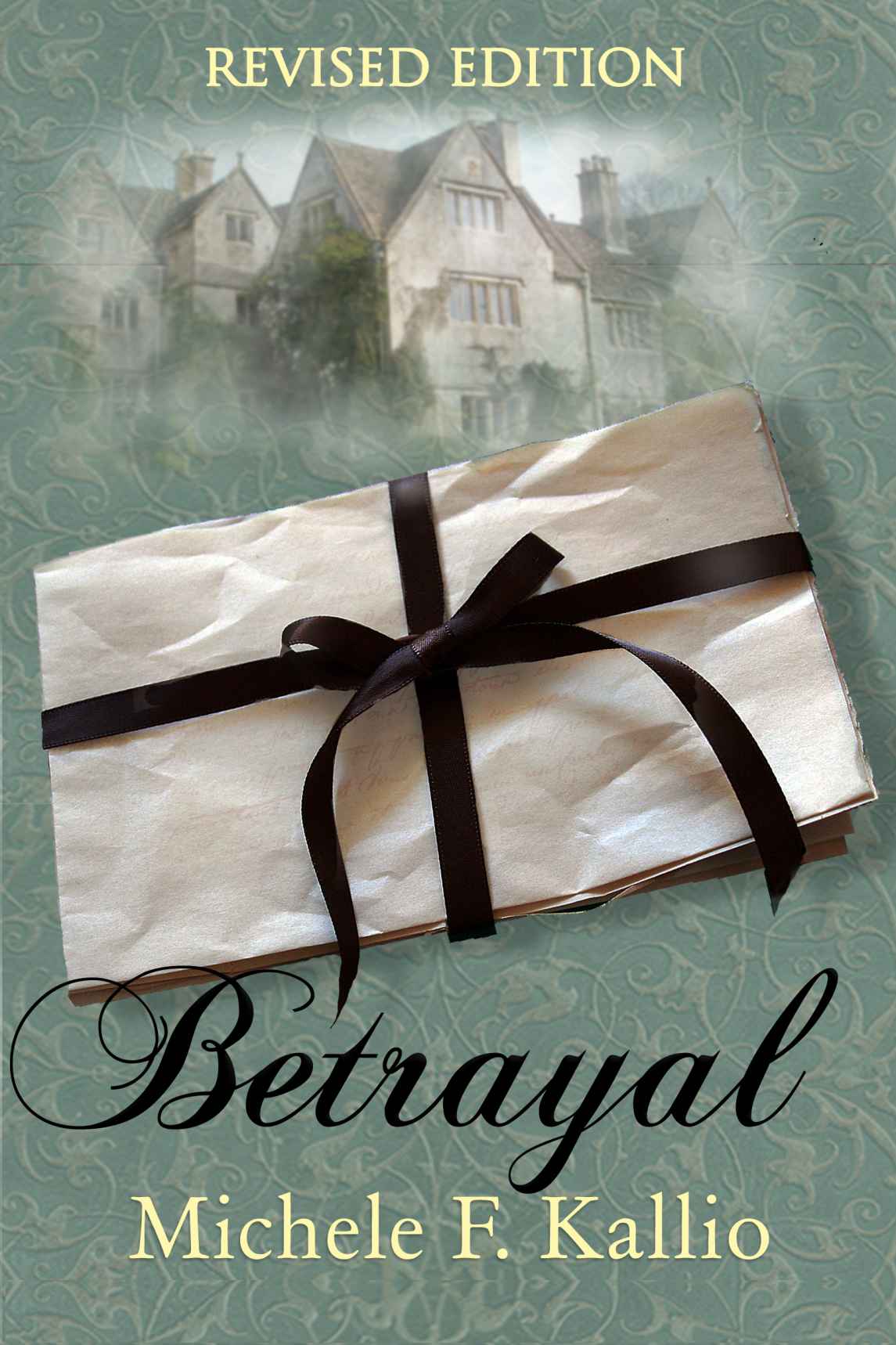 Published in 2013 by Michele F. Kallio

This is a work of fiction.  All names and characters in this book are fictitious or used fictitiously.  Any resemblance to any person living or dead is purely coincidental and is not intended by the author.

The author has asserted their moral right under the

Copyright, Designs and Patents Act, 1988, to be identified as the author of this work.

All Rights reserved.  No part of this publication may be reproduced, copied, stored in a retrieval system, or transmitted, in any form or by any means, without the prior written consent of the copyright holder, nor be otherwise circulated in any form of binding or cover other than that in which it is published and without a similar condition being imposed on the subsequent purchaser.

I would like to thank all the people who helped me with the research for this book, especially Christine Ware, whose advice on all things English and whose boundless energy led me to places and people which filled my every need. Any errors are my own. I would also like to thank Germaine Chevarie, whose encouragement helped me stay the course. I would
especially like to thank my editor J.R. Schell for her insightful comments and suggestions. Most of all, to my husband, David, whose love and support have been the foundation on which I was able to build.

Lydia awoke slick with sweat, a scream echoing from her lips, her arms flailing the empty air, her hands fisted tight.   Slowly, her breath returned to normal as she sank back into the cold sheets.  She lay there watching the early dawn light creep across her bedroom ceiling.  Dan lay sound asleep at her side. Lightly, she stroked his cheek, but he slept on.  With a frustrated sigh, she threw aside the feather duvet and climbed out of bed.

She looked at Dan’s sleeping form, resentful of his peace; sure he could sleep through an earthquake. Taking one last look at the bed, she turned to the bathroom to shower. She lazed in the shower, her chilled body soaking up the heat.  Lydia drew an outline of Dan’s face in the steamy wetness of the shower door, dragging a willful lock of hair down over his left eye.  She mused that this unruly lock of dark brown hair must have been a girl magnet.  It had been for her. It was so sexy, so inviting to touch, to brush out of his eye.  The distant sound of the alarm clock drew Lydia from her reverie. They had argued the night before and she feared they would argue again today.

Toweling off, Lydia stood beneath the heat lamp recessed into the ceiling.  She blew dry her long, blonde hair, grimacing in the mirror at its straightness.  “Straight as a
pin,” her father had always said.  Suddenly it was his face in the mirror, chiding her to stand straight, eyes forward and to never look back.  “Yes,” Lydia whispered to the phantom in the mirror, “You never looked back did you?”

Lydia could hear Dan moving about in the next room.  “Dan, are you up?”

A low growl came from the bedroom.  Lydia smiled, finishing her hair.  When she returned to the bedroom, Dan was already out of bed.  Her eyes, hungry with love for him, swept his tanned muscular body as he took off his pajamas; her gaze followed him as he entered the bathroom.  For a moment she was tempted to join him in the shower, but a quick look at the clock revealed no time to play.  The sound of Dan’s shower serenaded her as she moved about the bedroom, laying out clothes for the workday. Smoothing the rose-colored blouse before the mirror, Lydia looked at herself.  She liked how the long, black skirt accentuated her slender build and thought it a perfect match for her pale pink blouse. Raking her fingers through her hair she crossed the room to her dresser for her jewelry. She studied her long fingers, remembering the endless hours of piano practice.

Once again Charles Hamilton’s voice crossed the years.  “
Practice, Lydia, you must practice. Practice makes perfect in all things. How can you expect to play as well as I do if you do not practice? God has given you the hands of a pianist.
”

Lydia moaned. “And He has given me the ears of the tone deaf.” She had learned to play the piano, but without the artistry of her father. Her contemplation was broken when Dan came into the room.

“Good morning,” Lydia said forcing a smile. She could sense his frustration, but she was unwilling to acknowledge it.  She wrapped her arms around his waist, hoping to lighten the moment.

“I needn’t ask how you slept last night. You had that dream again, didn’t you?” his tone accused.  “I thought I heard you up wandering around.” Dan tightened his grip on her, twisting her to face him. “When will you admit you have a problem?”  Lydia struggled free from his embrace.

“I don’t have a problem as you put it. I have a dream. A very bad one, I admit, but Dan, it’s just a dream.  I am not going to allow some stranger to go poking around inside my head.  Do you want me to make breakfast?” Lydia continued as she headed for the kitchen.  Turning to the marble-topped counter, she picked up her teapot, filling it with hot water.

“Lydia, this is foolish.”

“Are you calling me foolish?”

“This.  I am calling this foolish. You push me away whenever I mention the dream. Must we have the same argument every morning?” Dan’s long arms hung limply at his sides. He ached to hold her, but he moved deeper into the argument.  “All I did was ask a simple question. A simple answer in return was all that was needed. Instead you push me away as if I had developed a sudden case of leprosy.  Look, I think it’s time you sought some sort of professional help.”

“If only it were just a dream, but damn it, Lydia, you know it is more than that. All I am asking is that you see Stokes.  Talk with him. See if he can help.”

Lydia turned at the kitchen sink, pouring the contents of her teapot down the drain.  “I refuse to go on with this discussion.  You have a meeting with George Seeley this morning, don’t you? What do you want for breakfast?”

“I’ll stop at Tim Horton’s on the way.  As you say I have an appointment with George before I can begin my rounds at the hospital.  I should be down to the office by ten at the latest. Have I got a busy morning booked?”

“Yes, the day is quite heavily booked.  So, see you then, right?”  Lydia turned her cheek to be kissed, but Dan just turned and walked out the door.

Lydia moved through the apartment to the bedroom.  She made the bed and picked up the scattered clothes on the floor.  Moving down the hallway she straightened the photographs on the wall; so many photos of Dan and his parents, his brothers and sisters, but only one of her father and herself.  It saddened Lydia that there weren’t more photos of her childhood.  Passing into the kitchen she made her breakfast of two slices of whole wheat toast and a cup of Earl Grey tea.  She sat staring into her tea, puzzling at the meaning of it all; her father’s secrets, the dream, and Dan. Lifting the fine bone china teacup to her cheek Lydia soaked in its warmth.  She felt chilled; she always did after a recurrence of the dream.  Lydia shivered though the kitchen was warm.

Dan held the miniature tape recorder in his hand.  He felt guilty about having taped Lydia describing her dream.  He winced at the thought of his deception, but he reasoned she had left him no choice.  Her continuing refusal to see Stokes had maddened Dan to the point of sneaking into her office, setting up the tape recorder, and then encouraging Lydia to talk about her dream.  Now, with the tape in his hand he felt far less confident about speaking to Stokes.  What would she do when she found out? Would she understand he did it to help her?  Sitting in his car Dan turned the tape recorder on.  Leaning back against the car’s rich leather seat he heard his voice begin.

“Let’s sit down here on the sofa,” Dan heard himself say, directing Lydia to the burgundy loveseat in her office.  “It’s time you told me about this dream of yours.  We can relax; the answering service will handle any calls.  There is no one here except you and me.”

“I don’t know, Dan.  I thought you didn’t think dreams were of any importance.”

“I want you to tell me about your nightmare.  I realize I haven’t been very supportive, but it is obvious that something is bothering you.  Let’s talk about it. Okay?”

“I don’t know.”  Lydia hesitated.  “If you think it will help, I guess I could. The dreams started suddenly a few months ago,” she said timidly.

“I know you hadn’t been having the nightmares until recently.  You have never really told me what the dream is about.  Why do you think you would start having a recurring nightmare all of a sudden?  Could it be a movie you just saw?”

“I have absolutely no idea.”

“Well, what’s the dream about?”

“That’s the problem. I don’t know what it’s about. It seems to be happening a long time ago.”

Dan chuckled. Then realizing that Lydia was serious he struggled to contain his laughter.  “I am sorry, Lydia, it just sounded so funny. You know, once upon a time and all that.”

The room became silent.  Dan could hear the gentle whir of the tape player. He waited for Lydia to begin again.  When Lydia spoke, Dan released a breath he hadn’t been aware he was holding. His sigh was audible on the audiocassette.

“In the dream I’m always the same person, a young woman.  I have never seen her face, but I know she has fair hair.  Her hands are small, with short, blunt fingers and the nails are dirty.”

“What do you mean looked at them?”

“At times I am aware that I am dreaming and once I recognize that, I try to look around so that I can remember more of the dream.”