Better Off Dead in Deadwood 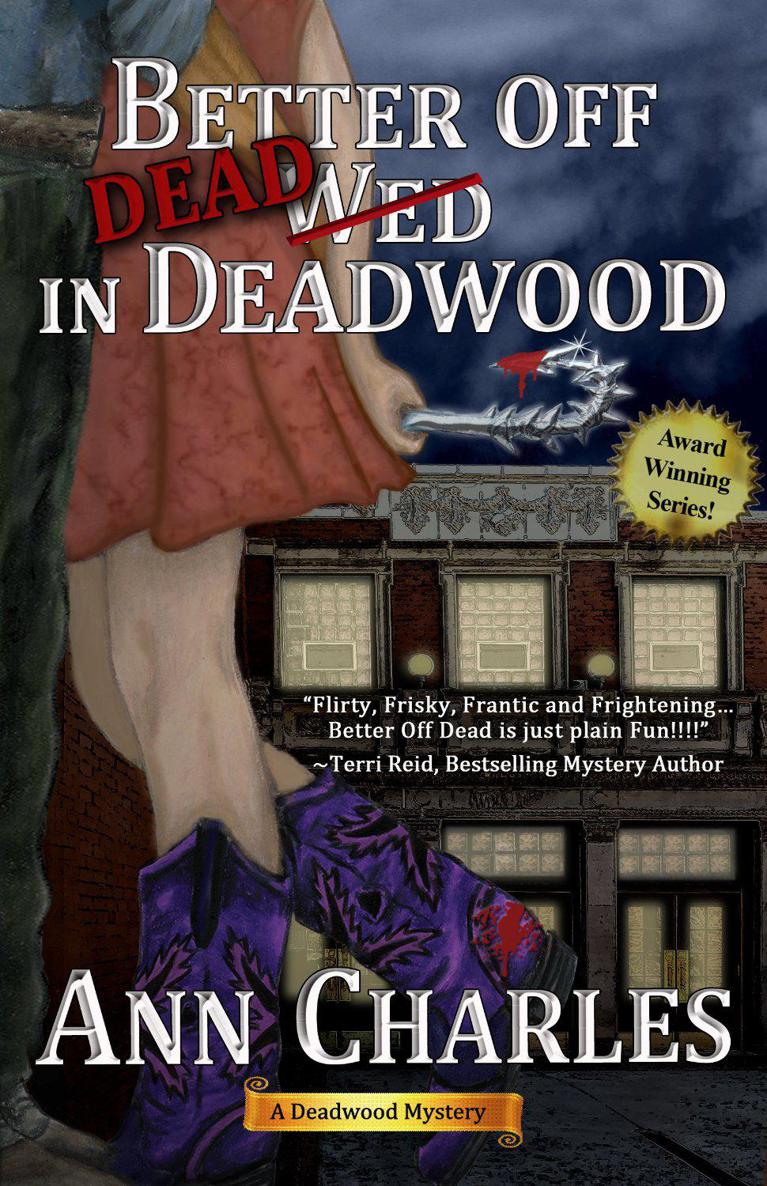 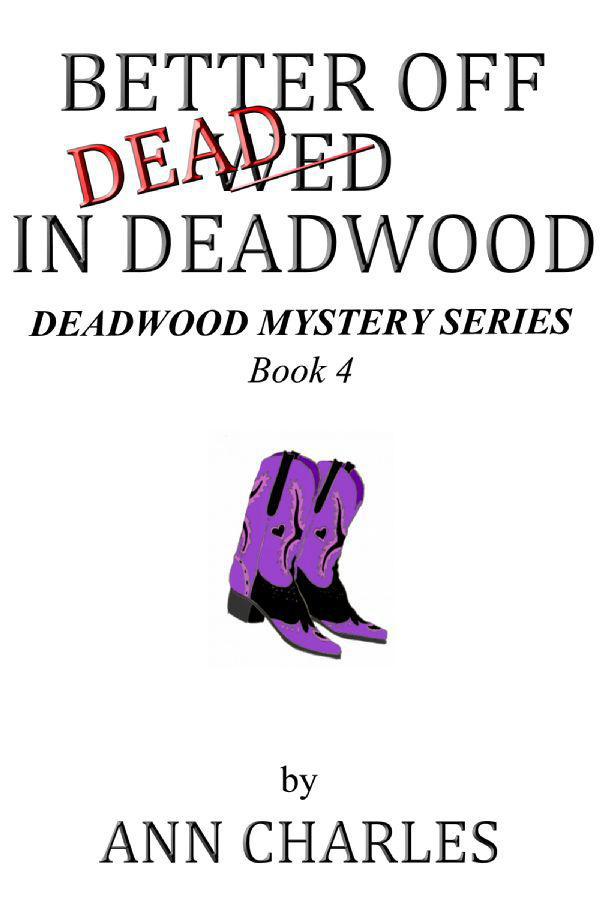 Other Books by Ann Charles

I’m often asked, “How many Deadwood books do you plan on writing?” With this fourth book in front of you, I thought you might be wondering the same thing.

An organized author would have all the books planned out with a high-level outline that indicated how she was going to weave the series plotline through each book, and how everything was going to end and when. Fortunately for you, Violet Parker had other plans.

When I started writing this series, I put together a high-level plot plan for multiple books. I really did! I was going to go about this whole business of writing a series as planned. By the time I’d finished writing the first book, NEARLY DEPARTED IN DEADWOOD, I was already “off” plan and had to pretty much scrap the rest of what I’d written down. At that point, I threw my hands up in the air and told Violet, “Fine, you tell the dang story; I’ll just keep notes.”

She took over and ever since, I’ve tried to keep up on the keyboard. The last time I asked Violet how many books she thought it might take to tell this story, she looked at me like I was wearing a red rubber nose and rainbow-colored wig and said, “As many as it takes to reach ‘happily ever after.’”

Do I know how it’s all going to end? Yes. Well, sort of. I think I do, anyway. But maybe not. With every book, I keep digging and realizing that this adventure goes much much deeper than I ever expected. Like in the mines now filled with water beneath Deadwood and Lead, there are story veins leading in many directions that are rich with fun-filled chambers yet to be explored. New characters arrive on scene with each book, adding more laughs and nail-biting anxieties to the world we’re discovering with every page.

Will Violet always leave you hanging at the end of the books in this series? Let’s ask my Magic 8 Ball … It says, “As I see it, yes.” There you go. Seriously, this is going to be a long tale, and I need to divide it into books to give everyone a break—the characters, me, and you. I’ve always enjoyed shows on television that have season finales which leave me excited and anxious for the next installment. My goal is similar; however, I often receive emails in the middle of the night full of cursing because someone couldn’t put the book down and now must wait until I finish writing the next. While I don’t like to frustrate people, those emails do make me chuckle. I’ve learned some very colorful language thanks to these folks.

Will the real residents in Deadwood and Lead grow tired of me sitting on benches along their Main Street and daydreaming about Violet’s world? I hope not. Judging from their entertaining, exciting histories, they are pretty tolerant of quirky characters.

I hope you enjoy this most recent slice of Violet Parker’s life. I sure did a lot of chuckling and wincing and grinning and holding my breath as she told it to me.

Hold on tight, because the ride is getting a little bumpy now.

Welcome back to Deadwood … and Lead.

This one is for Mom.

You’ve been so wonderful with all of your love and support.

I hope you can still walk through the grocery store in Lead without having to hide your face after this book is published. 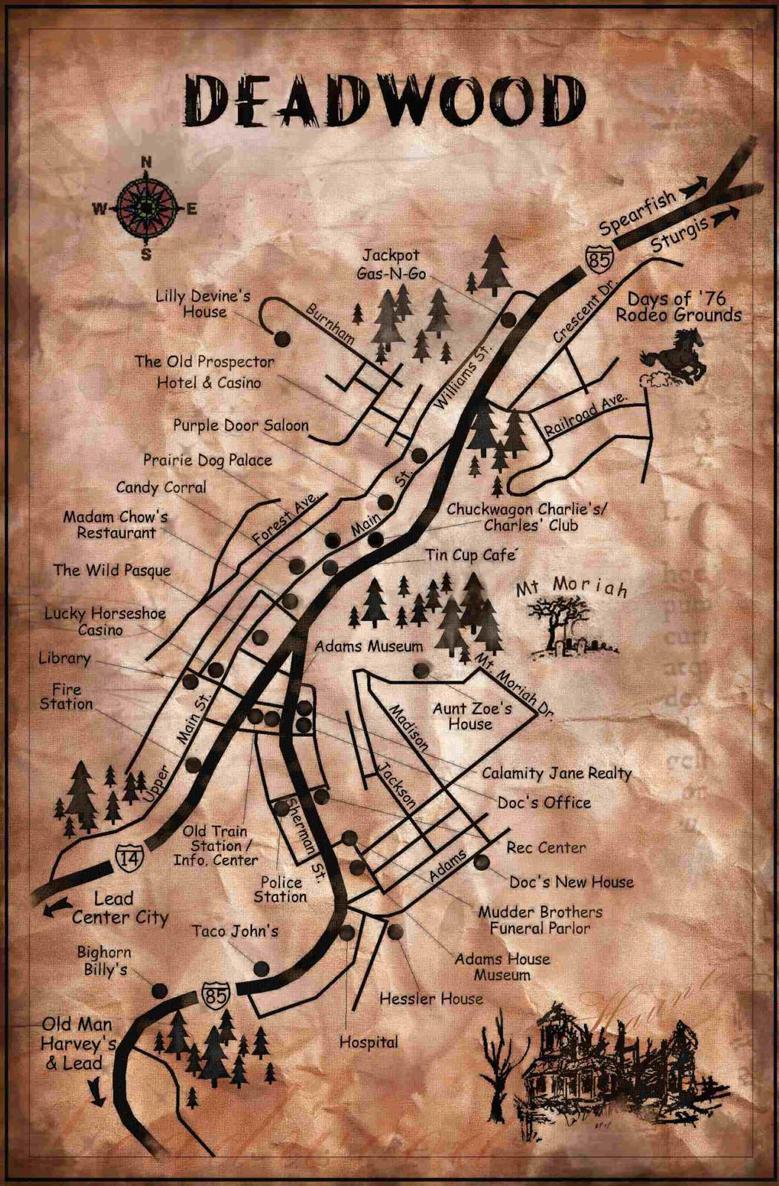 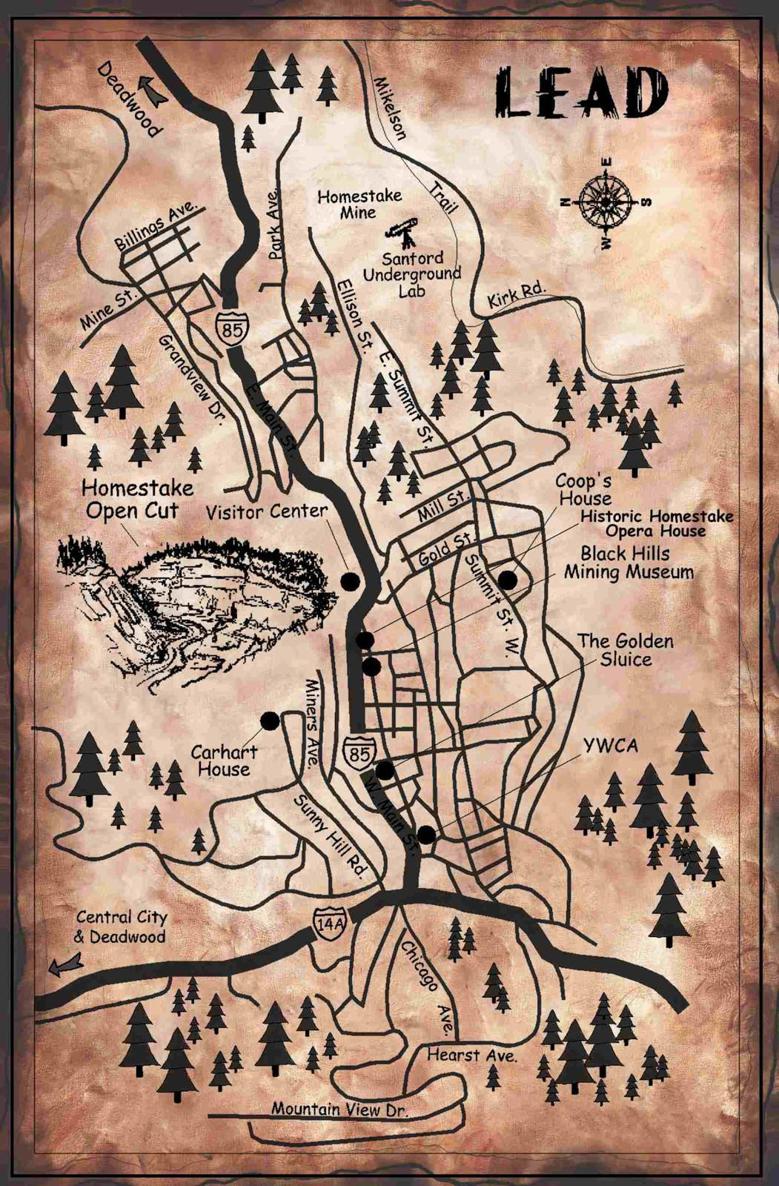 “You need to get your ass back in gear, Violet,” Old Man Harvey told me. “The world’s still spinnin’.”

“I just can’t believe Jane’s dead,” I said over the din of conversation surrounding us in Bighorn Billy’s Diner, a local favorite here in Deadwood.

I picked at my lunch salad, pushing the lettuce around on my plate, looking for life’s answers in between the leaves.

“Death will hornswoggle you like that,” Harvey said. “It’s like losing a molar; you’re gonna keep jabbin’ your tongue in that hole for a bit, but you’ll get used to it. We all do.”

A week had passed since Detective Cooper and his boys in blue had hauled my boss’s body up from the bottom of the cavernous pit of Lead’s Open Cut mining area, but I still hadn’t been able to digest the fact that she was gone. Not even after spending the last two hours teary-eyed at her memorial service.

I sighed, glancing across the table at Harvey.

He flashed me a grin. “Look on the bright side—I’m still around to keep you out of trouble.”

That made me smile. “Lucky me.”

Willis Harvey was known in Deadwood and in Lead—heck, in all of the northern Black Hills—for three things: chasing skirts, ruffling feathers, and sleeping with Bessie, his double-barreled shotgun.

Back in July when I’d agreed to be his real estate agent and sell his ranch south of town, he’d finagled an arrangement for a weekly meal, on me. Desperate Realtors called for desperate deals, and all that jive. Several meals and murder victims later, the ornery codger had glued himself to my side as my bodyguard and partner in crime … and crime solving.

Taking a sip of steaming coffee, I peered around the dining room at all of the folks dressed in dark colors, just like Harvey and me, fresh from Mudder Brothers Funeral Parlor. The murmurs of grief were muffled now by greasy burgers, drowned out by the clanking of silverware on plates and the scraping of chairs on linoleum.

Life was moving on without Jane.

It was time for me to get moving again, too. There were houses to sell, dollars to make, kids to clothe and feed—namely my two almost-ten-year-olds who both seemed to be hollow from the neck down these days.

“Have you heard any more rumors about what happened to Jane?” Harvey asked, shoving a bite of strawberry-rhubarb pie in his pie-hole.

“No. Cooper’s being extremely closemouthed.”

Detective Cooper had no problem rattling off his list of questions, but when it came to supplying answers, he kept repeating, “That’s police business, Ms. Parker.”

I had daydreams of shoving the pen he kept clicking during his interrogations some place where the sun didn’t shine, starting with his broken nose.

Harvey shook his head. “I can’t believe Jane’s ex-husband had the
cojones
to show up at her service with that sweet young piece of candy on his arm.”

Months ago, Jane had caught her husband in the act of burning up the sheets on her own bed with a much younger firecracker.

“You know, I could swear I saw his filly wrestlin’ in a mud-covered bikini last year over in Sturgis during the biker rally.”

After seeing the skimpy, black lace dress she’d been popping out of at the service, that wouldn’t surprise me. “You think he’ll be my boss now?”