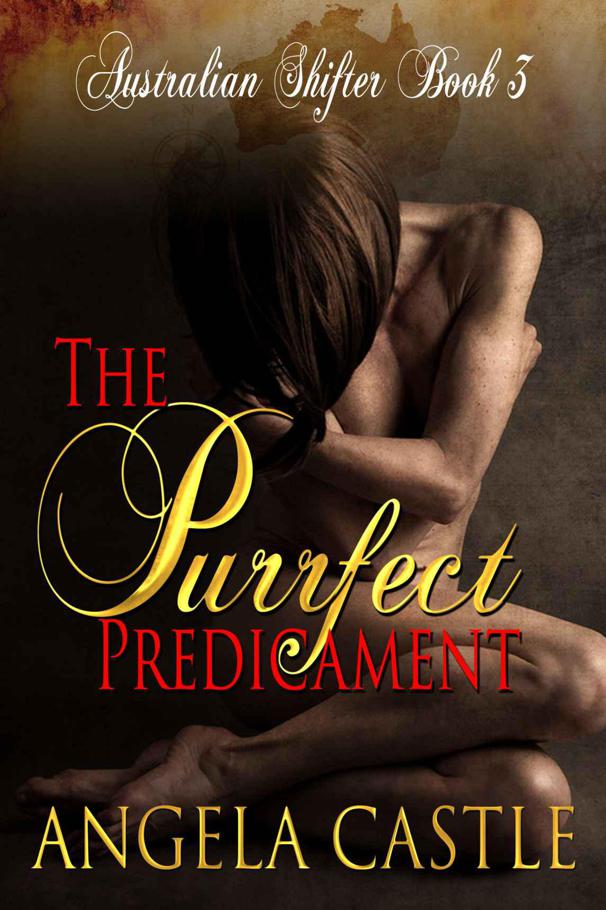 Electronic rights reserved by Rogue Phoenix Press, all other rights reserved by the author. The reproduction or other use of any part of this publication without the prior written consent of the rights holder is an infringement of the copyright law. This is a work of fiction. People and locations, even those with real names, have been fictionalized for the purposes of this story.

To my Angels, who have stood by me through thick and thin and to my beta readers, who help make a good story great!

This is not good, not good at all!
Andy Brown paced outside of the café by the north docklands of Sydney Harbor. The cooling autumn breeze coming off the bay felt refreshing. Not that he took any notice—utter panic clenched his chest.

Every shifter gets one chance at a true mate in a life time, considering his kind lived three to four hundred years; it was a hell of a long time to wait. So many shifters went through their entire lives without ever finding their special someone.

He and his twin brother Hamish had just hit their eighties; not even into their first century, and now this.

Andy turned, staring at the café door. Nestled within, eating hot chips and sauce, sat his true mate. His Panther roared to life at the scent of the man he'd bumped into as they'd passed.

It had to be a mistake, the fates had it wrong.

"It can't be a guy…I'm not gay!"
Oh Goddess what to do?
The food he just purchased, he tossed on a table and fished out the mobile phone from his jeans pocket, jabbing the speed dial button for his brother's number.

Hamish answered on the second ring. "
What? I wanted iced coffee, no low fat crap."

"First, calm down, and next, go get her dimwit."

"No, there's a mistake, m…my mate's not what it seems." Damn, he couldn't even bring himself to tell his own brother. They shared everything; they didn't keep any secrets between them.

"I'm just signing for the shipment now; I'll be there in a moment. Keep an eye on her and don't lose track."

Their cousin, and Alpha of Black Town, River Black, had sent them down to pick up a shipment of diamond-head cutters for their Earth moving company.

He paced again; his Panther was agitated not caring about the gender of his 'mate.' His cat was far more interested in getting to him and mating.

It made his stomach roll, damn.
I'm not gay, I'm not. I love women! Where the heck is Hamish?

The urge to go back into the café and take another peek at his mate, rode him hard. Maybe his eyes were just playing tricks on him? His hand settled on the door of the café, ready to push it open, but stopped at the sound of Hamish's blue Ute.

Andy turned to watch his brother's car roll to a stop outside the curb of the dock. Hamish climbed out, but his calm collected swagger as he strode forward didn't help matters. Hamish's brown eyes regarded Andy, no doubt amused at his flustered state.

Andy growled low and threatening. "
He
is in there." There! It was out. He'd told his brother.

Hamish's left eye brow quirked up in surprise. "He?"

"Hummm…" Hamish rubbed his chin. "Just take some deep breaths or something. Let me check this out, which one, is uh, it?"

"He's wearing a black baseball cap and blue patterned shirt and has a scent like orange lilies."

Hamish shook his head and walked into the café.

Hamish entered the little café and stood still for a moment. He drew in the smell of meat pies, heated frying oil and coffee, nothing out of the ordinary. With another deep breath he sorted through the scents while his eyes took in the few occupants consuming their purchases. The pretty red headed serving girl stood behind the counter, a seductive smile on her thin red lips.

"Can't have finished the pie already?" Her curious blue gaze studied his face. Obviously, Andy had been laying on the charm.

Ignoring the girl, his gaze fell on the fellow Andy had described. From what Hamish could see behind obscuring black thick-rimmed glasses, he appeared young, with smooth pale skin. Hamish noted a smear of black grease on his right cheek, his clothes ratty and smudged with dirt. His body frame seemed off for a guy—small yet rounded,
interesting
. Hamish inhaled again, but all he could smell was heavenly lilac?
What the hell?

The Panther, in the back of his mind bolted wide awake. Hamish could feel the beast pacing and growling.
Get closer, get closer
. His feet obeyed before he realized what he was doing he stood over the youth. A punch of arousal hit as his Panther upped the volume to a roar.
Mine, mate, mine…take!

The fellow glanced up, startled by Hamish's looming presence. Even through his thick glasses he could see wide green eyes, framed by attractive long, light brown lashes.

"What? What's your problem?" The guy gritted out between clenched teeth. Clearly defensive of Hamish's hovering.

"Sorry, I uh, thought you were someone else." Hamish turned and walked away, battling to ignore his Panther as numb shock made his head spin. He pushed open the café door, needing cooler air and more open space to breath.

"Well?" Andy demanded, stilling with a frantic expression on his face.

Hamish stared at his brother as if seeing an alien. "This can't be happening."

"Andy shut up! The fates have more than screwed up, that, uh, guy, in there isn't just your mate, but mine too."

Hamish shook his head, watching Andy slump his six-foot-four body down into the chair next to the table with an abandoned pie and two iced coffee milk cartons. He ran a hand though his hair in obvious confused frustration.

"This can't be happening."

The café door opened and out stepped their 'mate.' Hamish turned around and Andy's head popped up.

The guy stood stock still, glancing from one to the other with a frown, before turning and hurrying away.

"We'll sort out what's fucked up later." Hamish's eyes tracked their mate as he walked down the dock. "Right now neither of us can afford to lose track of him. You take the car and I'll follow." Fishing his keys out of his pocket, he threw them at his brother.

Andy caught them in one smooth move and stood up. "Right, go, he's about to vanish."

For a moment, Jo glared at the tall, devastatingly handsome, yet, hovering man, before snapping at him for staring. What the hell was the guy looking at? Mind you it was hard not to want to drool over his shiny mop of brown hair, half disheveled as if he used his hand for a comb. It only added to his rakish appearance. His clean-cut jaw with symmetrically high cheek bones, painted a picture of masculine beauty. Topped off with his regal straight nose and two chocolate brown eyes… Wow, the Gods had pulled out all the pretty dust when they'd made this fellow.

Still, staring was rude, Jo's breath held, waiting for any sign the stranger may recognize and realize the truth.
He can't know who I am, no one knows.

Jo used to be someone else—long ago she'd been known as Juniper Carver. But now, she was just Jo Smith and preferred it to stay that way.

He backed up, turned and walked out of the café. The small café felt suddenly empty now that he'd gone. On the other hand, she breathed a sigh of relief; it had been a case of mistaken identity.

Usually, nobody gave her a second glance; it was how she liked it. No one could find you if you didn't exist.

Juniper glanced down at her half-eaten chips, grabbed them and headed out the door. She wouldn't abandon the meal she'd spent a few precious dollars on. She wasn't usually so reckless to buy something as frivolous as chips, but it was payday.

She stopped short outside the café and blinked several times. Had the handsome guy from before just doubled? It took her a moment to realize she was staring at twins. They both stared back at her with matching frowns.

Double yumminess and double trouble.
Run Jo, run
. She did just that, she scurried away.

It had been a strange encounter, but she was sure it had nothing to do with… A cold shiver ran down her spine, and she pushed the thought from her mind. She was safe, as long as she stayed under the radar.

She licked the salt from her fingers as she walked; March in Sydney was lovely. The sun sparkled on the water. She finished her now cool chips, before throwing the small paper bucket into the nearest rubbish bin.

She best enjoy the warmer weather while it lasted. Hopefully she could save a few dollars to get some warm blankets this winter.

She walked back through the maze of smaller lanes, turned right, headed down the lane and back into the recycling warehouse. Mr. Demopoulos, the owner, a heavy built, short Greek man with a receding hairline in which he continually combed over, made a nice living off peoples' rubbish and paying low wages. He got away with it by paying his employees in cash and under the table.

She didn't mind the work, sorting out the paper, glass and plastic, from some of the ickier things. It kept her hands busy and her mind off unhappy thoughts. A job was a job; it paid her rent and kept her fed. No way did she want to go back to living on the streets.

"Jo, you're back." Mr. Demopoulos strode over, handing her an envelope. "Finish cleaning up around the conveyor belts then head home. See you first thing Monday."

"Thank you, Mr. Demopoulos." She tucked the money into her jean pockets, nodded and headed over to the large brooms.

Fine hairs on the back of her neck prickled as she gripped the broom handle. The warehouse door was large and open, but she got the sudden feeling she was being watched. She turned, glancing around. There was no one but Mr. Demopoulos walking up the stairs to his office, talking on his mobile phone.

Vigilance helped her stay alive this long. But it also made her mind play tricks on her.

There's no one watching you idiot. Get the job done and go home.

Stealth and stalking came naturally to cats, especially when hunting prey. Hamish's prey seemed to be named Jo. He watched from his vantage point, between the corners of two buildings, peering into the recycling plant. From the other side, his brother approached.

Jo, could be short for Joseph? Joshua. Damn, Hamish had nothing against gay people. He just never thought of himself in the same category. His mind and body still craved a woman, so maybe he and Andy were bi? But with one true mate, it put them sexually off every other creature, male or female.

"His name is Jo, and he works here." The tension between them was thick in the air as they watched Jo sweep rubbish away from around a long conveyor belt.

Justice Burning (Hellfire #2) by Elle James
Bullseye by David Baldacci
La muerte del rey Arturo by Anónimo
Heir to the Jedi by Kevin Hearne
The Perfect Homecoming (Pine River) by London, Julia
Hated by Many, Loved by None 3 by Shan
Heathen/Nemesis by Shaun Hutson
Because of His Heart (For His Pleasure, Book 27) by Kelly Favor
Hot Decadent Rising (Breath of Darkness) by Stauffer, Candice
My Lucky Star by Joe Keenan
Our partner