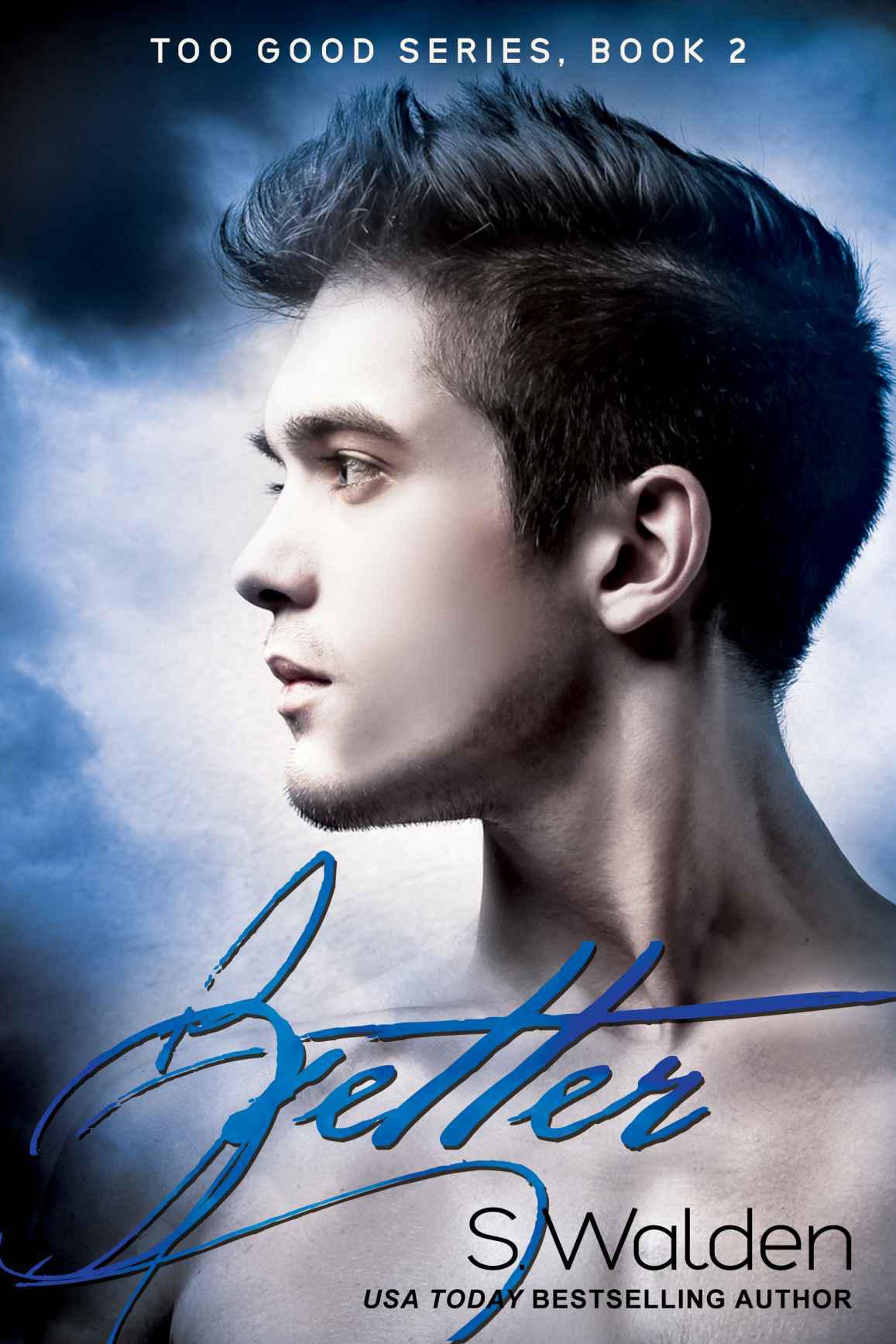 This work and all rights of the author S. Walden to this work are protected under U.S. copyright law, Title 17 of the United States Code. All rights reserved. No part of this publication may be reproduced, stored in a retrieval system, copied in any form or by any means electronic or mechanical, photocopied, recorded or otherwise transmitted without written permission from the publisher. This ebook may not be circulated in any format, resold, or given away. This book is licensed for your personal enjoyment only. Thank you for respecting the hard work of the author.

A special thanks to my friend, Stephanie, at Romance Addict Book Blog for conceptualizing, organizing, and managing promotion for this book. Your hard work and encouragement is invaluable.

Thank you to all the blogs who eagerly supported and promoted this book.

This is a work of fiction. Any similarities to real persons, places, or events are entirely coincidental.

Better
is the second and final installment in the Too Good series.

And these three remain: faith, hope, and love. But the greatest of these is love.

He watched her tiny shoulders shake with laughter. She pressed the dry erase marker against the board to hold it steady, but it was no use. Her laughter forced it up and down and sideways, muddying the numbers he’d written out for her.

“Ugh! Help me, please,” sh
e said, turning around to look at him.

He studied the wisps that framed
her face, the afternoon sunlight streaming through the windows, catching them and setting them on fire. Her hairline, temples, and cheeks glowed. She looked like a porcelain doll.

She grinned and shook her head. “
I still don’t believe you.”

He walked to the board and erased her mess. And then he rewrote the numbers and waited for her to start the problem. He wouldn’t baby her this time. He’d done it every time before. All it took was a little pout and the upturn of those sad blue eyes. He was a sucker, and he knew it. But not this time. This time she’d have to work for it.

“You know this, Cadence,” he said encouragingly.

She nodded and took a deep breath. He thought it was cute. He couldn’t help it. She was steeling herself for the mental workout.

He watched her furrow her brows.

And then her face clouded over.

She chewed her lip and
made a decision. She turned her pretty little face towards him, tilted her chin a fraction of an inch, and looked up with her big, sad eyes. And then she blinked. And waited.

“Thank you,” she whispered
.

He saw her tuck her chin to hide the grin
playing at the corners of her lips. She knew she won. Again. And he couldn’t be frustrated with her. He wanted to kiss the top of her head instead—right at the point where her hair parted. His admission of defeat.

She turned her face to him again, marker poised inches from the white board.

And there was no going back.

He walked around all afternoon with Cadence in his brain—unable to shake her, unable to figure out what to do with
her even though he already resolved to make her his. How? How did he honestly think he could pull that off? He needed perspective, so he made a detour on his way home.

He plopped the six-pack on the counter and sta
red at Dylan after his confession.

Dylan scratched
his neck, then leaned back in his chair. He propped his feet on the counter and looked at his best friend.

“Are you out of your fucking mind?”

Mark sighed and popped the cap of his Newcastle. He took a swig then shrugged.

“Uh, no. You d
on’t get to shrug. Answer my question! What the hell, man?” Dylan said. He took the beer Mark handed him.

“You need a song?” Dylan joked.

Dylan laughed and grabbed a record off the back counter. He slid it over to Mark.

Mark rolled his eyes and walked to the closest record player. He pulled the vinyl from its sleeve and placed it on the turntable. He lifted the arm, then paused.

“No. That’s not it.” Mark
placed the needle carefully on the vinyl. “Good choice, by the way.” He listened as the distinctive sound of The Killers filled the tiny space of the record store.

He said it facing the record player. He couldn’t look at his friend, but he sensed the immediate tension in the room. There was a long stretch of silence before Dylan spoke.
Mark watched the record spin as he finished his beer.

“Look man, I k
now everything with Andy—”

Dylan took a deep b
reath. “How is this chick gonna help you, Mark? She’s in
high school
. She’s nowhere near your maturity level, experience level—”

“I don’t want her to be,” Mark said. He turned around and walked back to the counter, hoisting himself up
on it and reaching for a second beer. “You want another?”

Dylan shook his head. “I’m on the clock.”

Mark smirked. “Well, I’m not.” He popped the cap and took a long, satisfying gulp. “I don’t want her to know anything.”

“What? So you can corrupt her?”

“Yeah, so you can corrupt it.”

“Shut up, man. That’s not it.” Mark thought for a moment. He took another sip of beer and scratched the stubble on his cheek. “She doesn’t hurt.”

“I don’t even know what the hell that means,”
Dylan mumbled.

“Yeah, you do,
” Mark replied, looking his friend in the face.

“She’s this beautiful little thing. And I want it.”

Mark laughed. “I really like her. And I know it’s unwise, okay? I know all this. But you don’t understand. She’s just there, all the time, shining.”

“Okay, so
what do you plan to do with the shining girl?” Dylan asked. He watched the smile spread across his friend’s face.

“Yeah, and then the shining girl puts you behind some shiny metal bars. Mark, you’re a smart guy. Use your head. And I mean this one,” he said, pointing to his temple.

Mark chuckled
. “You haven’t met her.”

“I’m sure she’s like every
other teenage girl,” Dylan replied. “And I’m not saying I wouldn’t wanna hit that, but society kinda has a problem with it, in case you didn’t know. You wanna look like some child predator?”

“Exactly. I don’t care how fucking shiny she is. Some things you don’t touch.”

“Dude. Step AWAY from the shiny object.”

Dylan shook his head. “You know I’m here for you. Any way this goes.”

“No. I think she mesmerized you. I think you’re lonely and jaded and looking for anything out there that’s the opposite of a
ll the shit you’ve been through—”

“No, man. We gotta be able to talk about it. It’s been two years, Mark. You’re not the only one who still hurts over what happened to Andy.”

The chime of the doorbell broke the intensity of the moment. Mark listened, detached, as a group of teenagers shuffled into the store
, chattering. Dylan shot up from his chair, immediately on guard.

Mark grinned
. “They haven’t done anything. Chill out.”

The men watched as the teens wove in and out of aisles, laughing and
punching one another’s arms. Mark heard one of them say “sweet ass” and instantly thought of Cadence.

“Oh God,” he whispered, running his hands roughly over his face.

“What’s wrong with you?” Dylan asked, eyeing a boy who was rifling through a stack of classic rock albums.

“Hey! What can I help you boys find?” Dylan yelled.

They turned in his direction, catchi
ng sight of the six-pack on the counter.

One exclaimed, “Dude! You drink at work?”

“My store. My rules,” Dylan replied.

They all nodded, impressed.

“Not one,” Dylan said. “Need help finding a record?”

“Not one,” someone else replied.

Dylan cracked a smile. “Then why don’t you get the hell outta my store.”

The teens froze before shuffling out, spitting timid insults at Dylan as they went.

“No
, I’m not. Those shits stole from me before. It took me a minute to remember. But I remember. That little blond shit . . .”

“Why didn’t you report them?” Mark asked. “And why don’t you get your cameras fixed?”

“She was my friend, too, Mark,” Dylan said softly.

Mark opened another beer. “I know she was.”

Mark’s eyes
flew open. He lay frozen in bed, engulfed in darkness, completely unaware of the girl lying next to him, breathing heavy and even. That sweet sound of contented sleep. He could think of nothing but that afternoon at Dylan’s store, sitting on the counter drinking too much beer, talking openly for the first time about the girl who disappeared under a white sheet stained red. The girl who promised him forever, then bled it out on an operating table. The girl he loved.

He turned his head to look at the living girl beside him. The girl who lay naked under his sheets, golden hair draped over her neck, acting as a scarf against the chill of the bedroom. He reached out to touch her hair, smoothing it through his fingers.

She nodded in her sleep
, then opened her eyes. She’d done this before, and he knew she wasn’t awake.

“I love you,” he whispered.

“Cadence, are you awake?” he asked carefully.

“I don’t have bad dreams,”
he said. “Go back to sleep.” He ran his fingers through her hair once more.

“Okay, bu
t I don’t believe you,” she mumbled, and closed her eyes. He waited until he heard the heavy, even breathing again before slinking soundlessly out of bed.

He walked to the kitchen and opened the refrigerator. And then he
stared blankly inside, deciding if he wanted food or drink. He wasn’t hungry. No to food. He wasn’t thirsty either, though that beer looked refreshing. But he didn’t need refreshment. He needed an escape.

It didn’t happen often—remembering. Once Cadence walked
into the picture, he swore to bury the past, or, at least, the finer details. He’d never forget
her
. He didn’t want to. But the details. Well, those he could bury. But every now and then, he’d still dream of the past, and those finer details that would otherwise escape his memory during the day burst about his subconscious at night, demanding recognition. They took control of his dreams, and he’d wake some mornings soaked with sweat. He thought Cadence never knew. She never said anything about it until tonight.