Read The Outside Groove Online 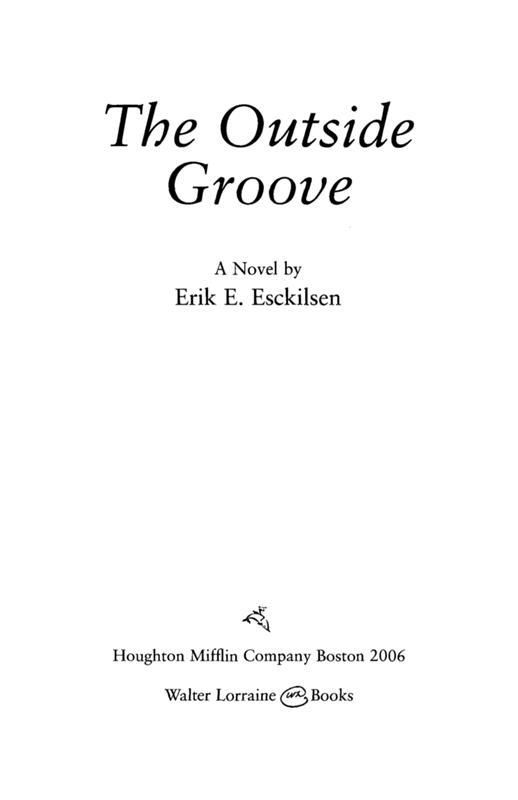 Summary: Tired of having her own accomplishments ignored, high school senior Casey, sister of the town's stock car racing champion, becomes the local track's first female driver and discovers that there is more to winning than crossing the finish line first.

This novel was inspired by Trade Bellerose of Gorham, New Hampshire, a track champion in the Late Model division at Thunder Road International Speedbowl in Barre, Vermont.

No one had ever accused me of having a winning attitude. In fact, until I started getting interested in racecar driving one late-April Friday, no one had ever accused me of anythingâgood, bad, or in between. Sure, once in a while one of my teachers at Fliverton Union High Schoolâ“Flu High,” as I called itâwould praise my work, but as soon as I left the school building, I became invisible. Well, maybe not completely invisible. Everyone in Fliverton knew me. I was, after all, “Casey LaPlante, Wade LaPlante's little sister,” as if this were a more notable achievement than being about to graduate Flu High as one of the top five students out of roughly two hundred seniors. I was especially strong in math and science. I'd run the numbers and determined that I couldn't fail out even if I stopped going to class. I'd also calculated that, even if I worked harder than ever, I wouldn't reach the very top rank. Marla Dietz, child astronaut, had that spot pegged since we were in junior high. This was actually good news to me. Not being the top student meant I wouldn't have to make a graduation speech, which I'd have enjoyed about as much as eating a load of mulch out of my father's pickup truck.

Free of that public-speaking anxiety or any reason to think about school at all, I had plenty of mental energy to focus on other things that spring, which was good because, like I said, I was starting to think about racecar driving.

Starting to.
Up until that particular April Friday, just before another Demon's Run Raceway season opener, I had absolutely zero interest in racingâthis despite the fact that virtually everyone else in Fliverton treated racing like a religion (an environmentally unfriendly religion, in my opinion). Therefore, people treated my brother, WadeâDemon's Run Raceway defending track champion at the young age of twentyâlike a high priest, even though he was just about Fliverton's most notorious hound dog. One-Tank Wade, some girls called him, since he typically stuck with a girlfriend about as long as it took to burn through a tank of gas. Still, for every girl who trash-talked him, there was another eager to scoot on over close to him in the front seat of his pumpkin-colored vintage Nova. I'll admit, that Nova was a sweet ride.

No, aside from his lengthy record of romantic hit-and-run, Wade could do no wrong in Fliverton. Everyone was saying he could break out of local short-track racing that season and join the national racing circuit, which people referred to as, simply, “the Circuit.” Whenever I wanted to annoy Wade, which was every time he'd annoyed me first, which was fairly often, I called the Circuit “the Circus.”

“Like to see you out there running the high-banked oval,” he'd sneer. “Longest quarter-mile on the planet, let me tell you.”

Demon's Run is a quarter-mile asphalt track. That's why it's called a short track. National circuit tracks, like the kind on television, are usually anywhere from a half mile to two miles long, sometimes longer. To me, a quarter-mile, half-mile, or ten miles didn't deny the fact that a stock-car race was basically four left turns, then four more, then four more ... The allure of the sport, if you could call it a sportâand I, a cross-country runner at the time, definitely didn't consider auto racing a sportâhad escaped me. But in Fliverton, I was alone in that opinion. To everyone else there, having a driver from our hometown make it to the Circuit would've put us on the map in a way that only one other racecar driver had ever come close to doing: Wade LaPlante Sr., better known as Big Daddy. My father.

The Circuit. The big time. Way bigger than, say, graduating in the top five of a high school class. People who graduate in the top five of their class go on to college and then to jobs in such pointless fields as medicine, law, government, business, andâmy dream careerâenvironmental science. Conservation. Saving the planet. Drivers who win Circuit races go on television and say, basically, “Yup. I drove around in a bunch of circles faster than the other guys” and make millions of dollars. In other words, there was no comparing Wade and me. I didn't matter. Not even a little. Like I said, my attitude was not a winning one.

This was precisely what I'd been thinking at the end of that Friday as I crossed the student parking lot and strapped into my carânot my racecar, just my regular car, the used German rig that I bought with money I'd earned baby-sitting and then tutoring the son and daughter of a husband-and-wife lawyer team, the Egans, in Brogansville. (Okay, Big Daddy kicked in some cash, too.)

I was sticking my key in the ignition and starting the engine, when over the tops of my glasses I spotted Fletcher Corwin stepping to the door of his swamp-green Dodge Dart, which was parked nose-to-nose with Hilda. That's my car, a Volkswagen I named Hilda, shortened from Broom-Hilda, a purple-faced witch in a comic strip I used to love reading in the
Granite County Record
when I was a kid. My Hilda's not purple, though. She's more maroon.

Fletcher was Wade's pit crew chief, but not even that had prevented me from developing a crush on him. I know that sounds pathetic and girly, but I'm not going to deny it. Not only did Fletcher always give me a wave and a hey when our paths crossed, but he wasn't exactly the ugliest guy at Flu High. His green eyes and slightly dopey smile gave him a gentle look that seemed to match his personality. The bushy blond sideburns were a tad unkempt for my taste, but maybe that was because my father owned a landscaping company, and I tended to notice when things grew wild. Fletcher was rope-thin and tall too, an important quality in any guy I was going to have a crush on, since by my senior year I stood five feet ten inches in a pair of running shoes.

That day in the parking lot, instead of waving, Fletcher smiled and tipped the brim of his faded red W
ADE
L
A
P
LANTE
M
OTORSPORTS
baseball cap, cowboylike. I waved back, threw Hilda's stick shift into reverse, and backed out before my face lit up like a stoplight.

Despite my lack of a winning attitude in general, my attitude toward Fletcher Corwin specifically was very good. And as soon as I'd left the school lot, my attitude toward the day also began to improve, thanks to a flash of midafternoon sun. As I drove through town, I wondered about Fletcher, what he was planning to do after we graduated. He was about a full year older than I was, since he'd taken a year off from school after eighth grade when his dad died and his mother developed some psychological problems. I'd heard that she was better, but I imagined that between looking after her and running the Wade LaPlante Motorsports crew, he must've been a busy guy. Maybe he wasn't making big plans for the future. I didn't know.

But I did know, as I cleared the village and crested Burnt Hill Road, that the ribbon of Willow River running across the valley below would make my heart race. It always did. Because the river never let anything stand in its way as it charged west out of Granite County. And neither would I.

At the intersection at the bottom of the hill, I did a two-tap stop and banged a left onto River Road, letting Hilda's tires whine in the turn, then punched the accelerator. I worked up to third gear in about five seconds. The roads were dry, and the frost had melted below the asphalt, smoothing out the nastier bumps. It'd been several long winter months since I'd seen what my little German friend could do. Maybe Hilda wanted to get some exercise.

Big Daddy had offered to help me pay for the car because that particular model, even the older model years, was known for safety and low maintenance. He'd said that he didn't want to have to worry about me, and I understood the second meaning of the statement: He didn't want to have to waste any precious time under Hilda's hood that he could spend managing Wade's racing career.

Still, for a “practical” car, Hilda had very good pickup, and she liked to hug the turns. Yes, she was real affectionate that way.

I'd hit sixty miles per hour before I blew by the yellow sign with the tractor logo signaling the Dumont Farm. Knowing the Dumonts had a lot of cats, I backed Hilda off to fifty as I passed their picturesque old barn and their equally postcard-perfect house.

Just past the barn, where the cornfield started, I shifted into fourth gear and spiked the RPMs on Hilda's tachometer before upshifting. It was a lightning-quick shift, and she didn't miss a breath. In the flat, two-mile stretch ahead, Hilda sucked up blacktop like root beer. Sixty-five, seventy, seventy-five, eighty, eighty-two, eighty-five miles per hour without so much as a microshimmy. Not Hilda. I brought her back to eighty and let her enjoy it for a few moments, and she did, her engine singing a sirenlike tribute to the
performance engineering
that Big Daddy had yammered about at the dealership. I eased her back down.

Doing forty, I pinned Hilda to the right shoulder and entered Idiot's Curveâso named, by me, because that was where Wade LaPlante Motorsports crewmember Lonnie Snapp nearly ran me down on a cross-country training jog the previous summer. With even pressure on the accelerator in the turn, I pulled hard on the steering wheel to keep Hilda from yanking out toward the centerline.

As the road straightened out, my house came into view, perched atop a hill about a mile up Meadow Ridge Road, which branched left off River. My arms tingled beneath my sweatshirt as our silver mailbox caught a glint of light, poking out from the trees off the right shoulder.

I pulled up close enough to reach the mailbox through the passenger-side window and leaned way over to yank the door open, drawing a sharp breath when I saw the white envelopes stuck in there among the magazines and catalogs. I slid the mail out, shut the mailbox door, and tossed everything into the back seat except the white envelope embossed with the Cray College logo. The envelope felt thin but not too thin. If there was only one sheet of paper inside, I estimated, it must've been thick. Tapping the letter on the gearshift knob, I tried to gauge its weight.