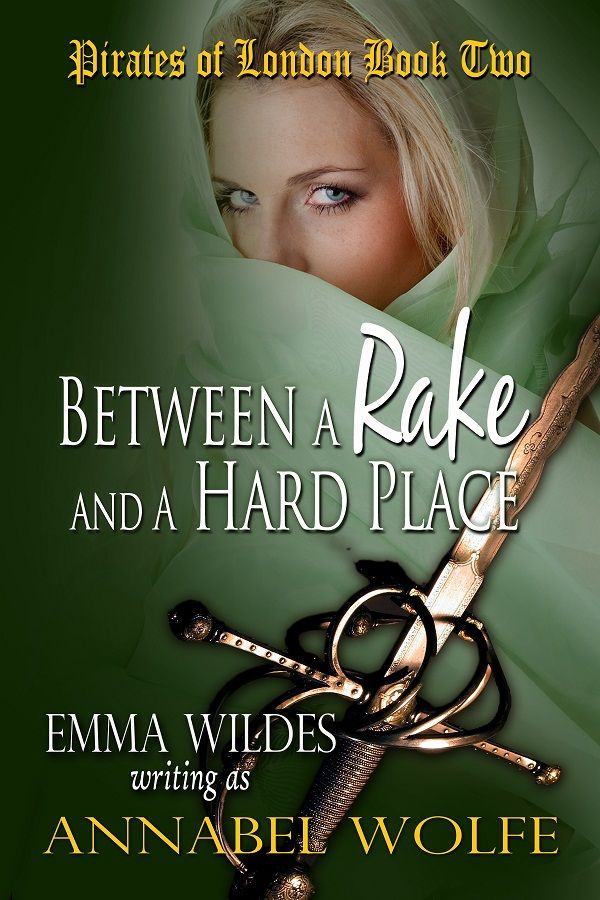 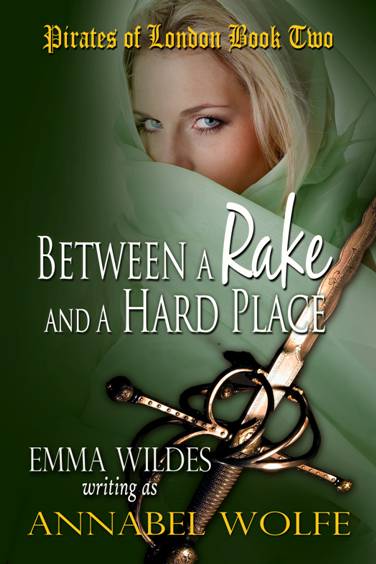 BETWEEN A RAKE AND A HARD PLACE

Charles is not deemed highborn enough for the daughter of a haughty Marquess, so when the honest approach doesn’t work, he decides to call upon his infamous alter ego, the pirate Satan, and simply take what he wants…

The Switch
: Adam Trevor’s unforeseen problem means he has to call on his twin to impersonate him and bed his lovely bride in his stead…

Hot Sahara Wind
: When Lady Sarah finds herself in violation of a sacred law, the only way to save her life is to marry a foreign prince…

For Juanita Brand, in friendship

The courtyard was every man’s fantasy.

There were women everywhere; reclining on divans, sitting around the long rectangular pool in the center, chatting by the blooming hibiscus and jasmine in the gardens bordering the circular space. The brilliant blossoms suited the human occupants as the odalisques were also exotically beautiful, most of them barely dressed in the heat of the day, their laughter musical and low.

And not one of them was blond.

Christopher Ives stood in the shadow of a large tree with fragrant white flowers that teased his cheek at the hint of a breeze, thinking hard. Were he discovered in this part of the seraglio, he’d be either castrated or executed—or perhaps both—neither possibility very appealing. It was considered a sin to gaze upon another man’s woman, much less the Sultan’s harem, and he had it on good authority that the man in question did not show a great deal of mercy to infidels—or anyone else.

The Earl of Oakham’s daughter better be worth risking his ballocks. There were three guards, skin oiled to a glistening hue, their bodies thick and muscular, the eunuchs armed with scimitars, gazes vigilant as they stood in different parts of the enclosure. Since all he had for hand to hand combat was the dirk sheathed in his boot, he was exceedingly uninterested in drawing their attention to his presence. It had not been feasible to bring in a larger weapon—he’d known that from the beginning. The British Consul had been quite frank about the futility of an attempted rescue.

But the impossible was, after all, his specialty.

He shrank back, pressing against a small niche in the shaded wall as he heard footsteps. Christopher had to admit his mouth went dry when Sultan Ali himself walked past, his stride brisk and his expression impassive. The women went silent, their eyes downcast, frozen in place, but he appeared not to notice any of them. He was young, probably no older than Christopher’s own age of thirty, but starting to fill out from overindulgence, his ascension to the pinnacle of power due to a struggle in the royal family involving intrigue and the murder of his father.

In short, he wasn’t an enemy to underestimate as killing meant very little to him.

“Ready the English girl. This evening I’ll have need of her.”

Christopher swore softly under his breath. That was
not
a stroke of luck, but lucky for him, after several missions in this country, he understood enough of the language to get the gist of what the Sultan had just said.

The tone was final and dismissive. One of the guards murmured assent, and hurried off toward the south entrance of the courtyard, disappearing through an ornate door. The Sultan surveyed his harem then, his disparaging glance no more than a flicker of interest on each female, and then he turned on his heel and stalked off.

At least, Christopher mused, still plastered against the wall and unmoving, he had an idea of her location and a timetable.

Now, all he had to do was spirit a woman he’d never met out of a closely guarded palace before the Sultan made her his concubine in the most official way possible.

The dream didn’t fade and was punctuated with small vivid moments in which she registered the scent of perfumes she didn’t recognize and the odd sensation of people touching her.

Surely the nightmare would be over soon.

Warm water lapped over her skin and Lady Cassandra Lawson sluggishly attempted to sit up, but for whatever reason it was impossible. Hazily she registered a golden glow from the ornate filigree on the high barred windows as she struggled to lift her heavy eyelids.

None of it made any sense whatsoever.

She was in a warm shallow pool of some kind with women bending over her and the soft feel of the cloths they were using to wash her was soothing, but her complete nakedness in front of strangers was not. Her personal maid was one matter, but there were at least three people she’d never seen before assisting with her bath, and she mumbled an objection and tried to sit up again.

Someone said something in a foreign language and alarm resurfaced, this time bringing her more fully awake, though she had a beastly headache. Cassandra shrank back against the edge of the square bath, folding her arms across her bare breasts. “What…what are you doing?”

No one answered. Instead, one of the women, dark-haired and dressed in a long brightly colored gown, took her arm and urged her to stand. Cassandra obeyed, more than a little unsteady, and a towel was wrapped around her as she was assisted out of the water.

The room was unfamiliar, the walls made of some smooth material that looked like marble at her first confused glance, the tiled floor cool on her feet. Not England…she didn’t remember exactly what had happened, but definitely not England.

A warm afternoon in Mayfair and she’d gone out with her maid, the street was crowded. Someone had jostled her from behind.

Then the cabin on the ship, small and dank, the horrible food, no answers to her desperate questions.

But where the devil was she now?

Cassandra jerked away, almost falling, and to her horror large hands caught her from behind and set her back on her feet. She whirled around and choked out a sound of dismay. The man was enormous, his grasp easily spanning her waist, and she felt small and insignificant next to his towering height, his scowl needing no interpretation. The very idea he’d been in the room while she bathed—or
been
bathed was more accurate—was mortifying.

“Where’s my father?” she demanded, not nearly as imperiously as she wished, her voice cracking shamefully. “I want to see Lord Oakham at once.”

Though she’d never thought of herself as spoiled particularly, she certainly was not used to being utterly ignored. The women acted as if she hadn’t spoken, and the giant male pointed at a doorway and not so gently pushed her in that direction.

Wake up from this nightmare.
Unfortunately Cassandra had already come to the dismal conclusion she might just be awake after all.

The next hour did not improve matters. It became clear that the servants didn’t understand—or care—about her increasingly agitated demands, and eventually she was bound and a silken gag placed over her mouth to keep her quiet. In contrast to that detached treatment, she was placed on a comfortable low bed covered with pillows, her hair brushed to a high sheen, and perfumed oil rubbed on her skin. Once she had given up trying to wrench away or protest because it was evidently fruitless, the gag was removed and a soothing beverage of some kind offered, the sweet taste cloying but better than nothing at all, as her thirst had increased as her head had cleared.

Two things were becoming very plain. Wherever she might be, she had no recollection of her arrival, and secondly, though she was not being harmed outright, her wishes were clearly not a consideration. Had she been allowed her clothes she might be less appalled and off balance, but at the moment even the towel from her bath had been removed and she was utterly nude.

“Untie me.” She kept her voice as calm as possible as one of the women took the glass from her lips. “Please.”

It didn’t matter how pleasant she tried to be, she was still ignored. It was apparent enough they didn’t understand what she was saying any more than she could understand their language when they spoke to each other, so she lifted her bound hands in supplication, getting in response a slight shake of the closest woman’s head.

The entire time the giant stood there, his arms crossed over his massive chest, his gaze disturbingly disinterested considering her nudity. At almost twenty years of age, after a brilliant London season with over a dozen of offers for her hand in marriage, and fawning gentlemen who were lavish with their compliments and attentions, Cassandra knew most men considered her beautiful.

It was both reassuring he didn’t seem to notice, and yet added to the mystery of her current predicament. When she opened her mouth again to speak, he muttered something unintelligible and threateningly picked up the gag.

Given his enormous size and unsympathetic manner, not to mention that she was naked and bound, she thought better of asking more questions.

Supine and helpless, she gasped as one of the dark-haired servants picked up a colorful ceramic pot and dipped in a finger. The purpose, she discovered with incredulity, was to lean forward and circle her areola with a fingertip, tracing her nipple with crimson rouge.

The idea of anyone touching her against her will in such a way was so outrageous she went still in utter scandalized disbelief.

The other nipple was similarly turned a deep red, and it became even more shocking when her pubic hair was removed, the razor so sharp she didn’t dare move, and more oil applied. To make matters worse, which was hardly possible in her opinion, she was gagged again and left alone.