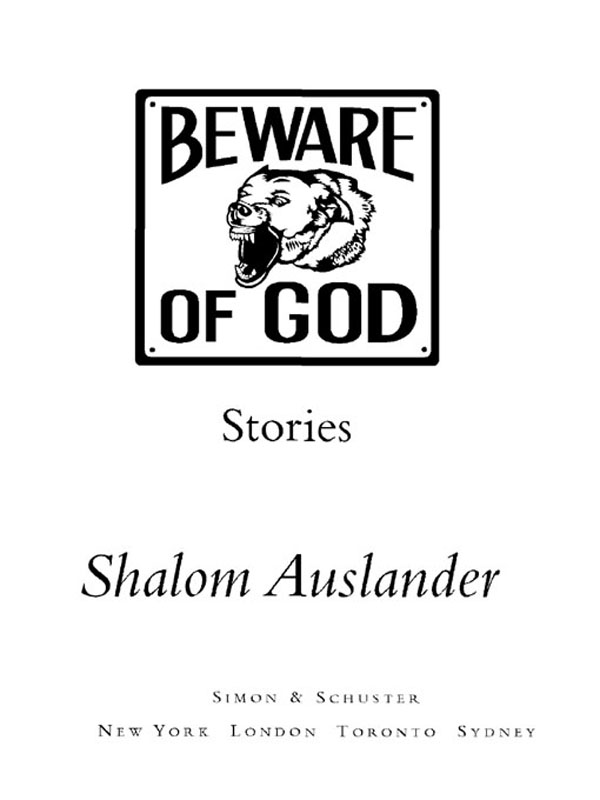 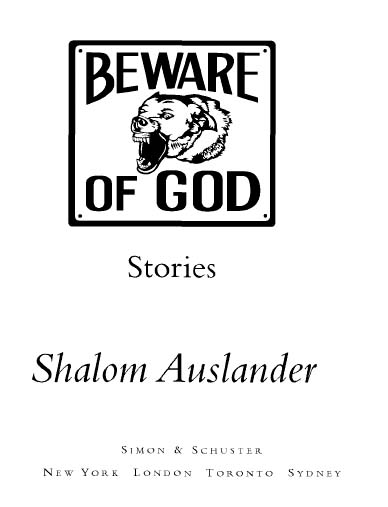 Copyright Â© 2005 by Shalom Auslander
All rights reserved, including the right of reproduction in whole or in part in any form.

The War of the Bernsteins

Somebody Up There Likes You

Startling Revelations from the Lost Book of Stan

One Death to Go

They're All the Same

God Is a Big Happy Chicken 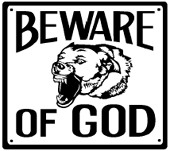 The War of the Bernsteins

T
HESE ARE THE THINGS
that Bernstein carried in the brown, broken suitcase he kept under his bed in the hope that the Messiah would arrive in the middle of the night: two pairs of black socks, one pair of black pants, a white shirt, one Book of Psalms, some rugalach, three yarmulkes, a spare set of phylacteries, two prayer shawls (one for weekdays, one for Sabbath) and a bathing suit because you never know.

“In the World to Come,” the rabbis would say to Bernstein, “there will be eternal happiness and joy.”

“In the World to Come,” Bernstein would say to his wife, “there will be eternal happiness and joy.”

“I'm sorry you're so miserable here,” Mrs. Bernstein replied from her post before the kitchen sink.

Bernstein lived every moment of this life in hopeful preparation for the next. Forty-five years of Torah study had convinced him not only of the sordidness of this world, but of the perfection and euphoria of the World to Come. As he got older, and that world steadily approached, Bernstein became ever more careful. Just last month, he had celebrated his fiftieth birthday.

Bernstein decided that with half his life already over, he was running out of time to score points. From now on, every action he took and every deed he considered would be put through a thorough cost/benefit analysis of reward versus punishment.

If he found himself to be too tired for morning services, he would remind himself of just how many rewards he'd receive in the World to Come if he could only get out of bed. He measured the lure of a one-time bacon double cheeseburger against the everlasting joy of love and peace. He weighed sitting in a buddy booth at the Show World Peep Center with an erection in his hand against sitting among the holy forefathers in the Garden of Eden with a crown of eternal love on his head.

The spiritual mathematics consumed him.

Was obeying a negative prohibition worth the same amount of reward in the World to Come as fulfilling a positive commandment? Would the inaction of negative prohibitions really be as rewarded as the deliberate action of positive commandments? If they were, could Bernstein simply not do those things that were negatively prohibited in this world and still be rewarded handsomely in the next, rather than actively doing those things that were positively commanded only to receive pretty much the same reward in the World to Come as if he had simply not done that which had been negatively prohibited? Would he actually be rewarded for not doing something, or would he just not receive the punishment he would have received if he had violated the negative prohibition? Then again, if the commandment was positive and he would receive punishment for not doing it, then would he receive rewards for doing it? Or was it just the not doing it that God was concerned with?

It gave Bernstein a terrible headache.

Mrs. Bernstein was only thirty-four years old last May, and was thus far more concerned with her lot in this world than with her lot in what was, in her own estimation, a decidedly dubious next.

Bernstein thought of all the cursing and immorality and nudity he might witness on the big screen, and how much euphoria in the World to Come it would cost him.
Your nakedness will be exposed and your shame uncovered. I will take vengeance; I will spare no one.

He briefly wondered if by renting
The Ten Commandments
he could be said to have fulfilled the commandment to
fill your heart and mind with Torah all the day and all the night
.

“Well, if we're staying home anyway,” Mrs. Bernstein said, “let's make love.” She grabbed him playfully around his waist. “Right here,” she said, “in the kitchen!” Bernstein thought about how many rules of modesty that would cause him to violate, and how much ecstasy in the World to Come it could possibly cost him.
And the Lord said, because the cry of Sodom and Gomorrah is great, and because their sin is very grievous.

Mrs. Bernstein decided that if Bernstein thought she was going to waste her life securing his front-row seat in the afterlife, he had another thing coming. And it wasn't euphoria.

She bought a red silk nightie at Victoria's Secret and wore it casually around the house. She would cause him two sinful thoughts for every pious one in his thoughtless little head.

He spilled his semen on the groundâ¦. What he did was wicked in the Lord's sight, so He put him to death.

The spiritual mathematics consumed her.

On the outside chance that there actually was a World to Come, she certainly didn't want to sacrifice her own rewards in the next life just to ruin his. Mrs. Bernstein didn't mind going to the Seventh Level of Hell, so long as she could walk to the edge, look down below and see Mr. Bernstein burning in the Eighth.

It gave her a terrible headache.

He became president of the synagogue.

Blessed is he who helps in the construction of a synagogue.

She used nonkosher wine for Kiddush. She put milk in his coffee after serving him meat. She put pork in the chulent. She put bacon bits in his salad, and told him they were imitation.

“Those who eat the flesh of pigs and rats and other abominable things, they will meet their end together,” declares the Lord.

Blessed is he who surrounds himself with the righteous.

(Bernstein figured he got himself a double-word score on that one, as he had
surrounded himself with the righteous
twice with just one picture.)

She set the alarm clock for Saturday morning. In his foggy half-sleep he would reach over and shut it off. Bam, Fourth Commandment.

Anyone who desecrates the Sabbath must surely be put to death.

The fool. He'd have to hang a hundred rabbi pictures around the house just to break even!

Bernstein began slaughtering his own chickens because he didn't trust his butcher.

He began cooking his own food because he didn't trust his wife.

He wore his tsitsit out, his beard long and his peyis curly. He purchased a black, wide-brimmed furfelt Italian handmade Borsalino hat, for which he laid out a cool $365.

Blessed is he who spends his money on fulfilling God's commandments.

Mrs. Bernstein didn't buy herself a new hat. She wore the same frayed beret to synagogue that she'd worn for years.

They rarely spokeâeven in the few odd moments when Bernstein wasn't at synagogue, doing charity work, praying or studying the Talmudic intricacies of who is liable to pay for damages if one man's bull gores another's (it depends who owns the field).

They lived opposite lives in opposite worlds.

One Friday night, after singing the grace after meals and reading the parsha of the week and saying the Shema Before Bedtime and kissing his tzitzit and touching them to his eyes and kissing them again and saying the Prayer Upon Sleeping and climbing into bed, Bernstein rolled over and tapped his wife on her shoulder.

“Blessed is he who obeys God's command to be fruitful and multiply,”
he whispered gently in her ear.

Mrs. Bernstein stared silently at the doorway. “I want a divorce,” she finally said.

There was a long silence.

Mrs. Bernstein sat up and swung her legs over the side of the bed.

“ âI hate divorce,' says the Lord God of Israel,”
threatened Bernstein.
“So guard yourself in your spirit, and do not break faith!”

Beneath her robe Mrs. Bernstein wore her pink sweater set and white Reeboks. She stood up, let the robe drop from her shoulders and picked up her car keys.

“The husband will be innocent of any wrongdoing!”
shouted Bernstein.
“But the woman will bear the consequences of her sin!”

These are the things Mrs. Bernstein carried in the tan leather valise she kept under her bed in the hope she would someday find the courage to leave her husband in the middle of the night: two pairs of black tights, the red silk nightie, her jeans, a makeup bag, a pack of cigarettes, the spring fashion issue of
Vogue
and a bathing suit.

Because you never know.

Duet for Three by Joan Barfoot
Royal Line by Sean Michael
Shade of Pale by Kihn, Greg;
Divisions (Dev and Lee) by Gold, Kyell
Parker's Passion by York, Sabrina
Burn by Sean Doolittle
Toward the Sunrise by Elizabeth Camden
The Rancher and the Runaway Bride Part 1 by Susan Mallery
Shadow Games by Ed Gorman
Man On The Balcony by Sjöwall, Maj, Wahlöö, Per
Our partner