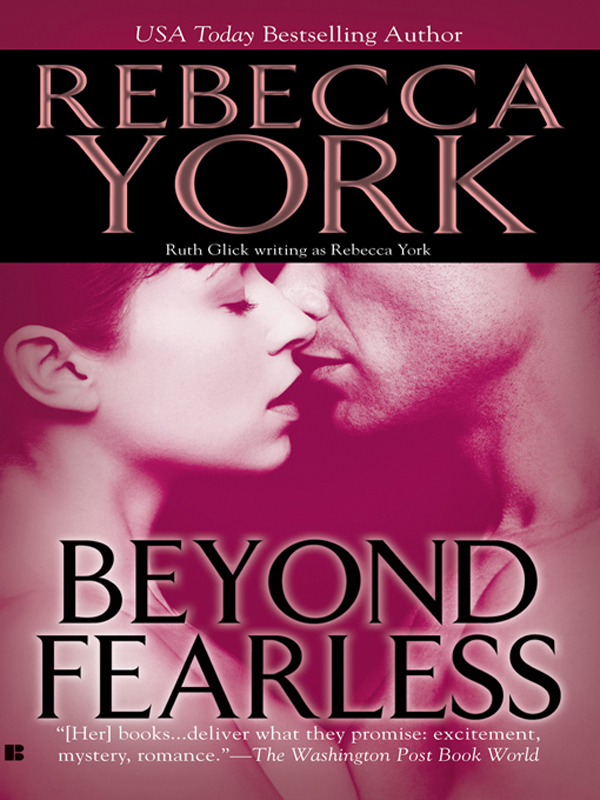 PRAISE FOR THE NOVELS OF RUTH GLICK

“Rebecca York's writing is fast-paced, suspenseful, and loaded with tension.”

“York has penned a convincing and sensual paranormal romance, and readers who fell in love with the characters inâ¦
Killing Moon
will be glad to meet them again.”

“Mesmerizing action and passions that leap from the pages with the power of a wolf's coiled spring.”

“A true master of intrigue.”

“No one sends more chills down your spine than the very creative and imaginative Ms. York!”

“She writes a fast-paced, satisfying thriller.”

“
Edge of the Moon
is clever and a great read. I can't wait to read the final book in this wonderful series.”

EDGE OF THE MOON

SHADOW OF THE MOON

All rights reserved.
No part of this book may be reproduced, scanned, or distributed in any printed or electronic form without permission. Please do not participate in or encourage piracy of copyrighted materials in violation of the author's rights. Purchase only authorized editions.
For information, address: The Berkley Publishing Group, a division of Penguin Group (USA) Inc., 375 Hudson Street, New York, New York 10014.

THE COOL BLUE
silence of the sea swallowed Zachary Robinson as he dove toward the luxury yacht that rested on a coral reef sixty feet below the surface of the Caribbean.

Colorful tropical fish and a small shark swam lazily around the wreck. The predator would have sent a less experienced diver kicking for the surface. But Zach wasn't worried. Sharks might have a bad reputation, but they rarely attacked divers, unless you did something stupid. And Zach always calculated the risks before going into any situation.

He was taking a risk todayâusing local guys instead of the crew that had been with him for the past two years. But they were back in the States, on a well-deserved vacation. Zach had stayed on Grand Fernandino, a Caribbean island east of Jamaica, where French, Spanish, English, and African influences combined to create a richly unique culture.

The day after Barry and Simon had left for California and Georgia, respectively, he'd been offered a job too lucrative to turn down. A millionaire from Palm Beach, Terrance Sanford, was looking for his missing brother and his brother's ship, the
Blue Heron
.

So Zach had hired JosÃ©, a certified diver, and Claude, an experienced sailor capable of handling the
Odysseus
, his sixty-five-foot converted work boat.

That morning, Zach had thought he'd located the missing craft with his onboard sonar. But when they'd dived down to the ship in question, he'd realized they'd found an older junker, already picked clean by other divers.

Now he and JosÃ© were going down for the second time in one day. It was not recommended procedure, since their tissues would still carry nitrogen from the last dive, but they'd be okay if they added an extra safety stop on the way up.

Propelling himself downward, Zach reached the yacht, which was resting on its side on a reef. Swimming to the stern, he felt a thrill of elation when he saw the name
Blue Heron
through the aqua water.

According to Terrance Sanford, the boat had gone down ten days ago on an ill-advised trip from Grand Fernandino to Jamaica, piloted by his sixty-year-old brother, William, who had ignored storm warnings when he'd left port.

Terrance wanted to recover his brother's body, as well as some valuables from the yacht. Apparently, he'd heard of Zach's talent for finding wrecks. He hired him by e-mail, with an advance wire-transferred payment.

While Zach was confirming the ship's identity, JosÃ© swam to the front deck, then slipped through the hatch into the cockpit.

Zach had just reached the deck when the other diver burst through the hatch.

With the swift insights that often came to him in an emergency, Zach sensed that JosÃ© was planning to do something very stupid: strike out directly for the surface. Without making the necessary decompression stops, he was looking at a case of the bends, a painful and sometimes fatal condition caused by rising too quickly.

As the lithe shape shot past, Zach caught one of JosÃ©'s swim fins.

The man kicked out, the blow muted by the clear blue water around them. When he couldn't free himself, he whipped around. Launching himself forward, he made a grab for Zach's air hose. Zach's only choice was to block the grasping fingers, then turn the attacker so that he faced away.

Stop trying to kill both of us,
he shouted in his mind.
What the hell is wrong with you?

But there was no way to speak in the watery environment, so he could only hold the diver still, praying that he'd settle down before they both used up their oxygen in the fight.

When JosÃ© stopped struggling, Zach kicked upward to the first decompression stop, forcing himself to wait while they both adjusted to the decreased pressure.

JosÃ© had gone limp in his arms. He wanted to turn the diver toward him and find out if the guy's eyes were still wild, but he had to content himself with knowing that the man seemed to be cooperating.

At the last stop, Zach realized he'd been lulled into dropping his guard. JosÃ© broke away from him and shot toward the surface like a torpedo released from a submarine.

Zach's silent curse followed the other diver. He ached to swim after him, but there was no way he could catch up. And he'd seen what happened to divers with nitrogen bubbles in their bloodstreams. It wasn't pretty, and he wasn't willing to risk it. Not when JosÃ© was almost at the surface.

So he waited the required minute at the decompression stop, then kicked upward again. As soon as he broke the surface, he struck out for the diving platform of the
Odysseus
, spitting out the mouthpiece of his air hose as he swam.

On the platform, he shook the water from his sun-streaked hair and kicked off his fins before scrambling onto the deck, where Claude was crouched over a sprawled limp form.

Claude looked up, his island drawl turned accusing. “What in hellfire happen, mon? He look like he came up too fast.”

“He did! When we got to the wreck, something in the cockpit spooked him,” Zach bit out. “I tried to stop him, but he fought me off.”

JosÃ© stared at him, his dark skin turned dull gray, his eyes vacant, and his breathing raspy.

Containing his anger, Zach said, “We'd better get him to the hospital. Call ahead and start the engine.”

Claude went to the wheel so Zach could tend to the injured man.

As he sat down beside JosÃ©, he demanded. “What the hell did you see down there?”

Zach reached down and brought the man's face back. “What was worth killing yourself for? And maybe me?”

JosÃ© looked like he was struggling for coherence, but he managed to give Zach a defiant look. “Pagor.”

“Kill me dead. I see Pagor down der,” he whispered.

Zach recognized the name. He'd done some reading before he came to Grand Fernandino, and he knew that the island had its own unique version of the Caribbean religions, called Vadiana. Pagor was one of the Vadiana deities, or saints.

“Pagor? The god of war?” he demanded.

“Yeah, mon” JosÃ© whispered. “He send that boatâthe
Blue Heron
âto the bottom. And he don't want nobody to see.”

“Christ!” Zach wanted to inform JosÃ© that Pagor was no more real than the boogeyman.

He had been raised by a mother and father who went to church on Christmas and Easter. On official forms that asked for his religion, he said he was a Christian. But religion had never played a big role in his life.

On the other hand, JosÃ© was a true believer. The man had about killed himself trying to get away from what he thought was an angry god.

Zach gritted his teeth. He wasn't going to talk the islander out of his beliefs. Even if they'd almost killed him.

Especially if they'd almost killed him.

He looked toward the horizon, watching the blue mountains of Grand Fernandino draw closer.

He wanted to turn around and head back to the dive site and find out what the hell JosÃ© had really seen down in the cockpit of the
Blue Heron
. But he'd already been pushing safe limits with the afternoon dive, and there was no way he could go down again until twenty-four hours had passed.

Wrong for Me (Bad Boy Romance) by Megan West, Kristen Flowers
Superbia 3 by Bernard Schaffer
Brolach (Demon #1) by Marata Eros
The Trespassers by Laura Z. Hobson
The Lore Anthology: Lore of the Underlings: Episodes 1 - 5 by Klobucher, John
C I N: "Lynn, Lynn, the city of sin. You never come out the way you went in." (The C I N Series) by Christina Leigh Pritchard
Robot Trouble by Bruce Coville
Stranglehold by Robert Rotenberg
Unknown by Unknown
The Secret Dead by S. J. Parris
Our partner