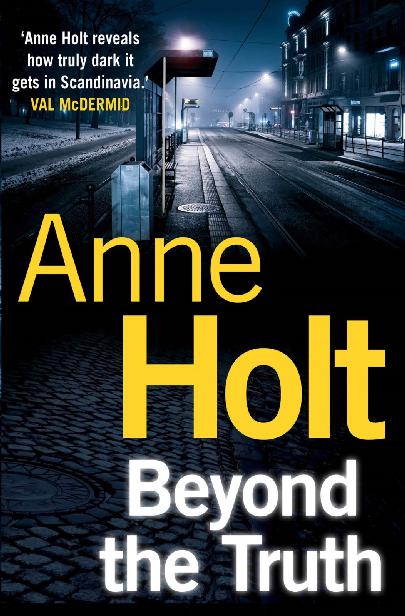 In the seventh installment of the Hanne Wilhelmsen series, the brilliant female detective must untangle the complex and bitter history of one of Oslo’s wealthiest families after a celebratory get together at their home ends in a multi-victim homicide.

Shortly before Christmas, four people are found shot dead at the home of the Stahlbergs, a wealthy family of shipping merchants notorious for their miserliness and infighting. Three of the victims are members of the family, and the fourth is an outsider, seemingly out of place. Cake had been set out in the living room and a bottle of champagne had been opened but not yet poured. Yes, family gatherings during the holidays can be difficult, but why did this one become a bloodbath?

As Hanne Wilhelmsen investigates the case alongside her longtime police partner, Billy T., motives for the murders emerge in abundance; each surviving member of the Stahlberg family had good reason to want the victims dead. As she searches for the killer, Hanne will once again risk everything to find out the truth. But this time, will she go too far?

Praise for "The Lion's Mouth"

Praise for the Hanne Wilhelmsen series

Anne Holt is Norway’s bestselling female crime writer. She was a journalist and news anchor and spent two years working for the Oslo Police Department before founding her own law firm and serving as Norway’s Minister for Justice in 1996 and 1997. Her first novel was published in 1993 and her books have been translated into over thirty languages and have sold more than 7 million copies. Her novel
1222
was nominated for an Edgar Award for Best Novel. She lives in Oslo with her family. 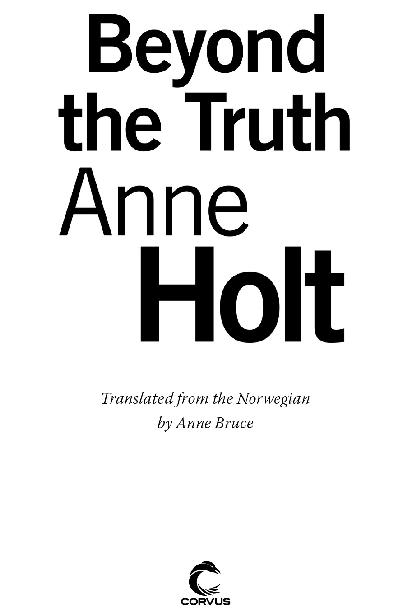 I
t was an old dog with stiff joints, damaged by calcification. Illness had caused the animal to resemble a hyena, for its powerful chest and strong neck shrank abruptly into a skinny backside, with the tail curling around its testicles.

The mangy animal came and went. No one could remember when it had first appeared. In a way, it belonged to the district: an unpleasantness impossible to avoid, like the noise of the trams, double-parked vehicles, and untreated sidewalks. People had to take precautions, keep basement doors closed and locked, haul cats in for the night, and secure lids tightly on garbage bins in back yards. Now and again someone complained to the public-health authorities when food scraps and other items of rubbish were left scattered beside bicycle racks three mornings in a row. They rarely received any response, and nothing was ever done to catch the beast.

If anyone had stopped to consider how the dog actually lived, it would have been obvious that it moved around the neighborhood according to a pattern, out of step with the calendar and therefore difficult to spot. If anyone had taken the trouble, they would have realized that the dog was never very far off, and that it seldom roamed beyond an area measuring just fifteen or sixteen blocks.

He had lived like that for almost eight years.

He knew his territory and avoided other animals as much as possible, giving a wide berth to lapdogs on gaudy nylon leads, and had understood long ago that pedigree cats with bells around their necks were a temptation best resisted. He was a stray mongrel in Oslo’s upper-class west end and knew how to lie low.

The period of mild weather in early December was over, and now a biting pre-Christmas frost had glazed the asphalt. There was a hint of snow in the air. As the dog’s claws scratched the black ice, he dragged his back leg behind him. The glare from the street lamp highlighted a gash on his left haunch, liver-colored on his close-cropped fur and speckled with yellow pus. It had snagged on a spike the previous evening while he was searching for somewhere to sleep.

The apartment building was secluded, set back from the street. A paved walkway divided the front garden in two, and knee-high chain-link fencing, painted black, enclosed the wet, dead grass and a flowerbed covered with tarpaulin. A twinkling, decorated Christmas tree flanked either side of the entrance.

This was the dog’s second attempt to gain entry in the course of the evening. There was usually a way. Unlocked doors were easiest, of course. A quick leap, a swipe of the paw at the door handle. It was usually immaterial whether the door opened in or out: unlocked doors were a piece of cake. But rare. Normally he had to search for basement windows opened a chink, loose boards around walls due to be repaired, or gaps under rotting cellar stairs. Access points that everyone else, apart from him, had forgotten. They were not to be found everywhere and sometimes these gaps were mended, basement shutters shut, and walls replastered. Blocked and impenetrable. He walked on. Sometimes it took several hours to find a place for the night.

There was an opening in this block. He was familiar with it and though it was easy, it mustn’t be abused. He never slept in the same spot for more than one night. On his first attempt that evening, someone had turned up. These things happen. So he always made himself scarce, quick as a flash. Trotted on for two or three blocks. Lay down under a bush, behind a bike rack, hidden from anyone who did not look too closely. Then he tried again. A good den was worth a couple of forays.

The frost had worsened during the past hour and the snow was real now: dry, light flakes that painted the sidewalks white. He shivered: he had not had anything to eat for more than twenty-four hours.

The building was quiet now.

The lights both lured and scared him.

Light brought a chance of being seen. It was threatening. However, light also brought warmth. Blood pulsed painfully through his infected wound. Warily, he stepped over the low chain fence, whimpering as he lifted his back leg. His hole – access into the store where an old sleeping bag lay discarded in a corner – was at the rear of the building, between the basement stairs and two bicycles that were never used.

But the front door was open.

Front doors were dangerous. He could get locked in. A cozy glow enticed him all the same. Stairways were better than basements. At the very top, where people seldom ventured and nobody lived, it was warm.

Keeping his head down, he approached the stone steps and stood perfectly still, front paw raised, before stepping slowly into the beam of light. Nothing stirred anywhere; there were no alarming sounds to be heard, only the distant, reassuring murmur of the city.

There was another open door.

He could smell food, and everything was totally silent.

The scent of meat was strong and he no longer hesitated. Quickly he limped into the apartment, but came to a sudden stop in the hallway. Emitting a low growl, he bared his teeth at the man on the floor. Nothing happened. The dog drew closer, inquisitive now, and more curious than apprehensive. Gingerly, he thrust his nose nearer the motionless body and tried licking some of the blood around the man’s head. His tongue grew more eager, washing the floor, cleaning the congealed clots from the man’s cheek, probing into the hole just beside his temple; the starving dog slurped down what he could extract from the skull, before it dawned on him that he did not have to exert himself to obtain food.

There were three more bodies in the apartment.

His tail wagged in delight.

“There’s nothing to discuss. Nefis will damn well have to learn how we do things.”

Mary slammed the door behind her.

“One, two, three, four,” Hanne Wilhelmsen counted and when she reached the “f” of five, Mary had reappeared in the room again.

“Bloody hellfire, if I went to those Muslims at Christmastime, I’d eat whatever they put down in front of me. Pure, sheer good manners, if you ask me. She’s not even religious. She’s told me that, time after time. On Christmas Eve here in Norway we eat pork ribs. Enough said, and that’s the end of it.”

“But, Mary,” Hanne made a desperate effort, “can’t we have rack of lamb? Then the whole problem is solved. After all, we had your pork ribs last year.”

Mary Samuelsen had once lived under the name “Hairy Mary”, the oldest street hooker in Oslo. Hanne had bumped into her three years ago in connection with a homicide case. Mary was near to death at that time, high on drugs and freezing in the bitter cold of the big city. Now she kept house for Hanne and Nefis in a seven-room apartment in Kruses gate.

Mary ran her arthritic hands stiffly over her apron.

“The problem, my dear Hanne Wilhelmsen, is that the only rack of lamb I ever put in my toothless gob before I met you and Nefis was cold, watered down, and arrived on a paper plate, courtesy of the Salvation Army.”

“I know that, Mary. We could have both, don’t you think? For heaven’s sake, we can certainly afford it.”

Hanne added the latter as she glanced despairingly around the room. The only furniture that remained from the apartment in Lille Tøyen where she had lived for more than fifteen years was an antique bureau, almost lost in a recess beside the door leading out to a gigantic terrace.

“Christmas is no time for compromise,” Mary declared solemnly. “If you’d sat like I had, sucking on a scrap of fatty meat too tough to swallow, year after year, one Christmas Eve after another, out of sight and forgotten in a corner, then you’d realize this has something to do with holding on to your dreams. Christmas Eve with crystal and silver and a decorated tree and a huge fat rib of pork in the center of the table, with crackling so crisp that you can hear it crow. Throughout all those years, that was what I dreamed of. And that’s the way it has to be. You could show that much respect for a poor old woman who might not have very much longer to live.”

“Give over, Mary. You’re remarkably fit. And not so old, either.”

Without a word, Mary turned on her heel once more and marched out, dragging one leg behind her. Her rhythmic hirpling disappeared in the direction of the kitchen. Hanne had measured it when they moved in, pacing it out when she thought no one was looking: sixteen meters from the settee to the kitchen door. From the dining room to the largest bathroom was eleven meters. From the bedroom to the front door, six and a half. The whole apartment was filled with distances.

She poured out more coffee from a stainless-steel thermos, before switching on the TV set.

For the very first time she had taken the entire festive period off work. A whole fortnight. Nefis and Mary had invited every Tom, Dick, and Harry to a sumptuous breakfast on Christmas morning, lunches during the following week, and a huge party on New Year’s Eve. On Christmas Eve it would be just the three of them. At least, that was what she thought. You never knew.

Back by Henry Green
Surviving Day By Day (Book 1): So it Begins by Allensworth, Audra
BoardResolution by Joey W. Hill
The Silver Devil by Teresa Denys
Make It Right by Shannon Flagg
The Takeover by Muriel Spark
Lawless by Ward, Tracey
His For The Night by Helen Cooper
Season of Strangers by Kat Martin
Pucker Up (A Damsels of Distress Novel) by Gates, R. A.
Our partner