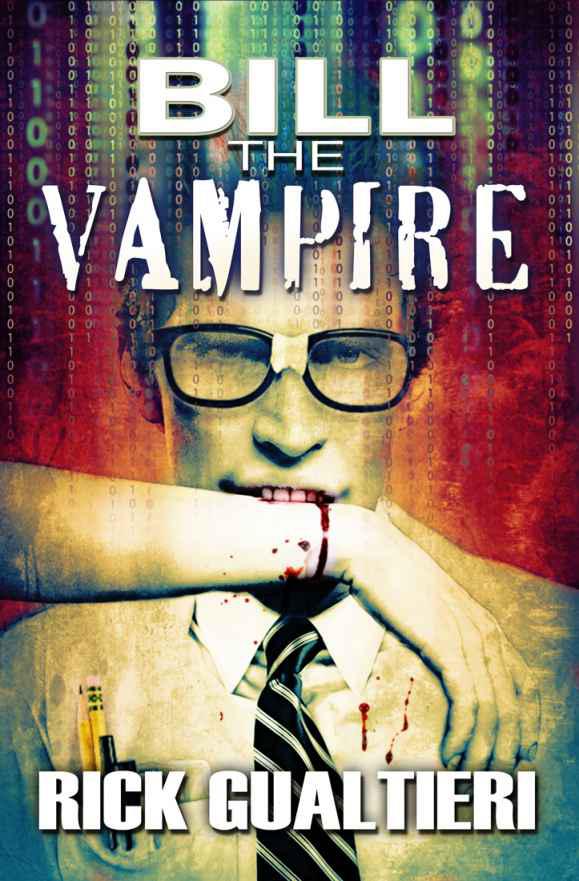 Table of Contents
Bill the Vampire

The Tome of Bill

No part of this book may be reproduced or transmitted in any form or by any means, electronic or mechanical, including photocopying, recording, or any information storage and retrieval system, without prior written permission of the author. Your support of author’s rights is appreciated.

All characters in this novel are fictitious. Any resemblance to actual persons, living, dead, or undead, is purely coincidental. The use of any real company and/or product names is for literary effect only. All other trademarks and copyrights are the property of their respective owners.

The views herein are the responsibility of the author and do not necessarily represent the position of Wayman Publishing.

Edited by A Step Up Editing

Cover by Carl Graves at
http://www.extendedimagery.com/

Visit the author’s blog at:
http://www.poptartmanifesto.com

For Spike, a good cat

There’s an old saying, “
Death is easy, comedy is hard.
” Personally, I don’t buy it. I don’t think comedy is particularly hard at all. Why? It’s not because I think I’m some kind of comic genius. Trust me, I’m not
that
delusional. It’s because no matter how lame a joke you make, or how badly you deliver it, someone, somewhere, will laugh at it. There, comedy! Horror, on the other hand, is hard. Now, I’m not talking about the ‘Jason jumps out of the bushes and you scream like a little girl’ type of horror. That’s fairly easy to do. My four-year-old could jump out of the shadows and get that result if he timed it right. I’m talking about true horror, the type of horror that makes you afraid to turn off the lights at night; the type of horror that makes you
think
, and not about good things. That’s hard, especially in written format. Of the dozens upon dozens of horror novels I’ve read in my life, I can only think of two that genuinely scared me. That’s not to say the rest were bad, far from it. But only two gave me reason to want to check under my bed before going to sleep.

Being that I’m not a complete prick, I’ll be happy to give credit where credit is due, and tell you which ones:  Stephen King’s
It
, and
The Relic
by Douglas Preston and Lincoln Child. The latter is more of a techno-thriller than pure horror, but it’s pretty damn scary nevertheless.

If that’s the type of book you’re looking for, then I shall save you the trouble, my friend. Put down this book and go pick up one of the above. Of course, when you’re done, please feel free to come back here. It’s okay. I’ll wait. It's not like I have anything better to do. Just don’t take too long. Idle hands are the Devil’s plaything, and all that.

As for this book, it falls into one of my favorite horror sub-genres: the horror comedy. No, I’m not talking about dopey slapstick like
Scary Movie,
or its legion of increasingly unfunny sequels. I’m talking horror comedy of the type in which a terrifying situation is thrust upon main characters that just don’t give a fuck. We're talking guys who are too busy spouting one-liners or hitting on the babes to notice that the world has literally gone to hell around them.
Army of Darkness
and
Ghostbusters
are, in my not so humble opinion, classic examples of this genre. Think about it. The coming of
Gozer the Gozarian
could easily be construed as a soul-crushing horrific fate for the people of the world, if not for one Dr. Peter Venkman, who just couldn’t be bothered to take it all that seriously.

This is that type of story. So, strap yourself in and prepare for the ride. And feel free to leave most of the lights off while you do so. Sure, there may very well be creatures writhing in the darkness waiting for you, but sometimes the thing they expect least is to be met not with screams, but with
attitude
.

That being said, all that remains are my hopes that you will enjoy reading this as much as I enjoyed writing it.

*Thud, thud*
Okay, somebody needs to turn off their goddamn stereo before I put my foot up their ass! God forbid a guy be allowed to sleep off a major bender without some dickhead blasting their bass to eleven. At least I think it was a major bender. I know I’m asleep, but I can still feel the room spinning. Yeah, I’ve gotta be drunk off my ass.

The funny thing is, I don’t remember getting drunk off my ass, although that doesn’t mean anything. The best parties are sometimes the ones you don’t remember. Still, I’m not sure I remember even going to a party last night. It
is
morning right? Can’t see anything. Well, duh, my eyes are closed.

Okay, my eyes aren’t opening. Guess I must be pretty shitfaced.

*Thud, thud*
There it is again! For fucks sake! Some days I hate living here. There’s always some white-bread little teenaged douche pumping out Tupac from his daddy’s Beemer because he’s sure he can relate to life on the streets. Although why is it so loud? Maybe the window’s open. I should get up and close it. Oh yeah, that’s right. I’m out cold. I can’t really check the window in my current state. Oh, well, maybe I’ll get lucky and some real gangstas will come cruising down the block and pop a few caps in homey’s upper middle class ass.

*Thud, thud*
ARGH! Really starting to piss me off now! Huh? What the hell was that? Holy shit, those are voices! Maybe I'm not at home, after all. If that's the case, I must still be at a party. Oh crap! I hate passing out at someone else's place. I really hope someone isn’t drawing dicks on my face. Last time that happened, the fuckers used a permanent sharpie. Let me tell you how much fun
that
was to scrub off. Probably took off five layers of skin, and you could still see it. Tom was an asshole about it, too. He kept pretending to be helpful just to get a laugh.
“You want me to go to the store for you, dickface?” “I’ll get it. Hello? Oh Bill? Sorry, he can’t come to the phone right now. He's too busy trying to get a cock off of his face. Can you call back later?”
One of these days, I’ve really got to get my own apartment.

*Thud, thud* Okay, it's getting a little lower now. Song must be ending. Still can’t make out what the voices are saying, but it doesn’t sound like laughter. That’s good. Means that maybe they haven’t started using my face as an easel yet. Maybe I can still wake up before that happens.

Jeez, my body still isn’t responding. Man, what the hell was I drinking!? Even passed out, I still feel seriously fucked up. I’m wondering if maybe I was doing a little more than drinking. I vaguely remember Ed saying something about scoring a few joints. Shit! Hope they weren’t laced with
Draino
or something. Although that might explain why I’m lying here having an internal soliloquy. Hold on, though, didn't that happen last week?

*Thud, thud* Why does that sound so familiar? I don’t usually listen to any shit rap music, but damn if that doesn’t ring a bell. It’s on the tip of my tongue... UGH! Speaking of my tongue, what the hell is that taste in my mouth!? Oh shit! Please don’t let me have puked. There’s nothing worse than puking at a party and waking up in it. Nobody ever gets laid after that. Well, okay, puke or not, it’s been a while since I scored at a party, but it could still happen... maybe. Although not if I’m lying in a swimming pool of my own spew.

Crap! I hope someone turned me on my side. Last thing I want is to pull a Hendricks. Okay, okay, relax. People aren’t that big of assholes. If I can hear them talking, then that probably means I’m okay.

Wildflowers by Robin Jones Gunn
Lie by Night: An Out of Darkness novel (Entangled Ignite) by Marlowe, Cathy
Red Rising by Pierce Brown
Forever After (Montana Brides) by Leeanna Morgan
When Only Diamonds Will Do by Lindsay Armstrong
Divided by Livia Jamerlan
Kingdom of Heroes by Phillips, Jay
To Be Queen by Christy English
The Infiltrators by Daniel Lawlis
Wonderful Lonesome by Olivia Newport
Our partner