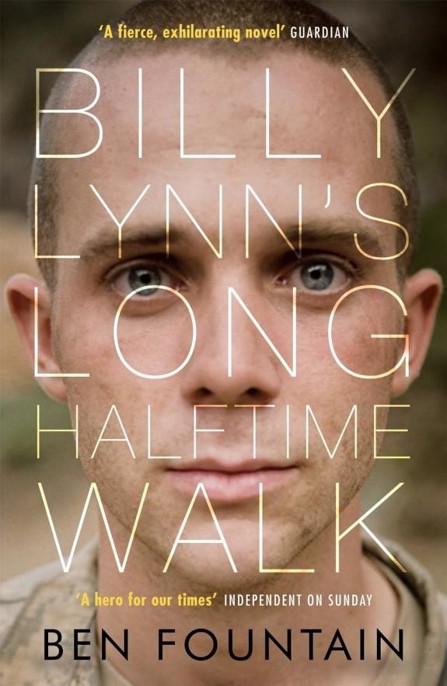 A PRIVATE IN THE INFANTRY

BY VIRTUE OF WHICH THE MANY BECOME THE ONE

BULLY OF THE HEART

WE ARE ALL AMERICANS HERE

DRY-HUMPING FOR THE LORD

THIS IS EVERYTHING THERE IS

BILLY AND MANGO ARE OUT FOR A WALK

IF IN THE FUTURE YOU TELL ME THIS IS LOVE, I WILL NOT DISAPPOINT YOU

WILL SLAY VAMPIRES FOR FOOD

THE MEN OF BRAVO
are not cold. It’s a chilly and windwhipped Thanksgiving Day with sleet and freezing rain forecast for late afternoon, but Bravo is nicely blazed on Jack and Cokes thanks to the epic crawl of game-day traffic and the limo’s minibar. Five drinks in forty minutes is probably pushing it, but Billy needs some refreshment after the hotel lobby, where overcaffeinated tag teams of grateful citizens trampolined right down the middle of his hangover. There was one man in particular who attached himself to Billy, a pale, spongy Twinkie of a human being crammed into starched blue jeans and fancy cowboy boots. “Was never in the military myself,” the man confided, swaying, gesturing with his giant Starbucks, “but my granddaddy was at Pearl, he told me all the stories,” and the man embarked on a rambling speech about war and God and country as Billy let go, let the words whirl and tumble around his brain 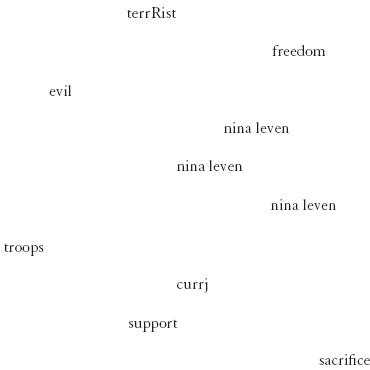 Thanks to asswipe luck Billy will have the aisle seat at Texas Stadium, which means he will bear the brunt of these encounters for most of the afternoon. His neck hurts. He slept but poorly last night. Each of those five Jack and Cokes puts him deeper in the hole, but the sight of the stretch limo pulling up to the hotel aroused a bundle of nervous cravings in him, this boat of a snow-white Hummer with six doors to a side and black-tinted windows for maximum privacy. “What I’m talking a-
bout
!” cried Sergeant Dime as he pounced on the bar, everyone whooping over all the pimp finery, but after destroying all hopes for a quick recovery Billy subsides into a gnarled, secret funk.

“No, Sergeant,” Billy says at once. “I’m just thinking about the Dallas Cowboys cheerleaders.”

“Good man.” Dime raises his glass, then conversationally remarks to no one in particular, “Major Mac is gay.”

And indeed, Major McLaurin is seated on the rear banquette, watching Dime with all the emotion of a flounder on ice.

“Aw fuck,” Holliday moans, but the major’s eyes merely take on a needling glint, then he holds out his fist to show his wedding band. Everyone howls.

There are ten of them in the limo’s plush passenger bay, the eight remaining soldiers of Bravo squad, their PA escort Major Mac, and the movie producer Albert Ratner, who at the moment is hunkered down in BlackBerry position. Counting poor dead Shroom and the grievously wounded Lake there are two Silver Stars and eight Bronze among them, all ten of which defy coherent explanation. “What were you thinking during the battle?” the pretty TV reporter in Tulsa asked, and Billy tried. God knows he tried, he never
stops
trying, but it keeps slipping and sliding, corkscrewing away, the
thing
of it, the
it,
the ineffable whatever.

“I’m not sure,” he answered. “Mainly it was just this sort of road rage feeling. Everything was blowing up and they were shooting our guys and I just went for it, I really wasn’t thinking at all.”

His chief fear up to the moment the shooting started being that of fucking up. Life in the Army is miserable that way. You fuck up, they scream at you, you fuck up some more and they scream some more, but overlying all the small, petty, stupid, basically foreordained fuckups looms the ever-present prospect of the life-fucking fuckup, a fuckup so profound and all-encompassing as to crush all hope of redemption. A couple of days after the battle he was walking down the gravel path to chow and there it was, this sense of reprieve or release, of a terrible burden eased, and all with no more effort on Billy’s part than the exhalation of a normal breath. This feeling of
ahhhhh,
like there was hope for him? Like maybe he wasn’t completely expendable. By then the Fox News footage was viraling through the culture and there were rumors that Bravo was going home, the kind of suicidally hopeful talk no soldier in his right mind would dare credit, and then, lo, they were QT’ed to Baghdad on two hours’ notice and thence across the ocean for their
Victory Tour
.

One nation, two weeks, eight American heroes, though technically there is no such thing as Bravo squad. They are Bravo Company, second platoon, first squad, said squad being comprised of teams alpha and bravo, but the Fox embed christened them Bravo squad and thus they were presented to the world. Now, here at the tour’s end, feeling soft, sated, bleary, under-rested and overproduced, Billy grows sad and nostalgic for the beginning. They were hustled onto a C-130 in the middle of night and took off from Baghdad in a hard spiraling scrooge. Shroom was with them, in a flag-draped coffin at the back. For the entire flight to Ramstein a couple of the Bravos were always sitting with him, but it’s the others who Billy thinks of now, the twenty or so civilians of various shades and accents who joined them for the ride. Not spooks—they were too plump for that, their smiles too heedless of the woes of the world, and as soon as the plane was airborne those guys were partying hard. Good whiskey, music blasting from a dozen boom boxes, a forest of Cuban cigars set ablaze—the fuselage quickly filled with a witches’ brew of smoke. It turned out that they were gourmet chefs. For who? The men just smiled. “The coalition.” They were French, Romanian, Swedish, German, Iranian, Greek, Spanish, Billy could discern no pattern or meaning in their nationalities, but to a man they were friendly and more than generous, eager to share their booze and smokes with soldiers. Evidently they’d made a lot of money in Iraq. One of the Swedes opened his calfskin attaché case and showed Billy the gold stash he’d acquired in Baghdad, several pounds’ worth of chains and ropes and coins, of such purity that they glowed more orange than gold. There amid the cigar smoke and rollicking laughs Billy had lifted one of the chains, testing it for heft. He was nineteen years old and had no idea that his war contained such things, and what a damn shame for him and the rest of Bravo that it has not been won in the two weeks since.

“Yes,” Albert is saying into his cell, which he bought special in Japan, which is two years ahead of everyone else in the race for cell phone superiority. “Tell her that, you can tell her this picture will maul. But it will also reward.” He’s silent for a moment. “Carl, what can I say? It’s a war picture—not everybody gets out alive.” Meanwhile Crack is reading aloud from the sports pages of the
Dallas Morning News,
reciting the odds from America’s Line so Holliday and A-bort can get their bets down. There are more than two hundred ways to bet on the game, including whether the coin toss will be heads or tails, which song Destiny’s Child will open with at halftime, and which quarter will the network broadcast make its first reference to President Bush.

Crack speaks as if reading from a recipe. “Drew Henson’s first pass of the game will be, complete, minus two hundred; incomplete, plus a hundred and fifty; an interception, plus a thousand.”

“Incomplete,” says Holliday, making a note in his little book.

“How about quarter where Beyoncé sits on my face,” Sykes says.

Whanh, whoa,
who
? “Hilary Swank a
bitch,
” Lodis sputters. “Why she talking to us?”

“Bee-
cause,
” Albert answers, punching it, knowing the rise this will get from Bravo, “she wants to play
him,
” and he points at Billy. Bravo erupts in hoots and cheers.

“Wait. Wait a second.” Billy is laughing along with everyone else, but he’s troubled too, already he senses the potential here for humiliation on a global scale. “If she’s a girl then I don’t see how—”

“Actually,” Albert says, “she’s floating the idea of playing Billy
and
Dime. We’d fold both parts into one role and she’d play that as the lead.”

More hoots, this time directed at Dime, who merely nods as if well satisfied. “I still don’t see . . .” Billy murmurs.

“Just because she’s a woman doesn’t mean she can’t do it,” Albert tells them. “Meg Ryan was the lead in that chopper flick, the one she did with Denzel a couple years ago. Or she could play it as a guy, hell, Hilary won a goddamn Oscar playing a guy. Well, playing a girl playing a guy, but whatever. The point is she’s not just another pretty face.”

Others who Albert is in talks with: Oliver Stone, Brian Grazer, Mark Wahlberg, George Clooney. It is a heroic tale, not without tragedy. A tale of heroism ennobled by tragedy. Movies about Iraq have “underperformed” at the box office, and that’s a problem, according to Albert, but not Bravo’s problem. The war might be up to its ass in moral ambiguity, but Bravo’s triumph busts through all that. The Bravo story is a rescue story, with all the potent psychology of the rescue plot. People respond deeply to such stories, Albert has told them. Everyone worries, everyone feels at least a little bit doomed basically all the time, even the richest, most successful, most secure among us live in perpetually anxious states of barely hanging on. Desperation’s just part of being human, so when relief comes in whatever form, as knights in shining armor, say, or digitized eagles swooping down on the flaming slopes of Mordor, or the U.S. cavalry charging out of yonder blue, that’s a powerful trigger in the human psyche. Validation, redemption, life snatched from the jaws of death, all very powerful stuff. Powerful. “What you guys did out there,” Albert has assured them, “that’s the happiest possible result of the human condition. It gives us hope, we’re allowed to feel hopeful about our lives. There’s not a person on the planet who wouldn’t pay to see that movie.”

Albert is in his late fifties, a big-boned, fleshy man with an unruly cloud of mostly gray hair and thick, wiry hedgerows of midlength sideburns. He wears black-frame glasses with round lenses. He chews gum. His hands are large and knuckly, and dark clumps of jungle growth sprout from his ears. Today he’s wearing a white dress shirt with the collar open, a navy blazer with a lining of brilliant scarlet, a black cashmere overcoat and cashmere scarf, and sleek, dainty loafers that appear to be made of pliable chocolate bars. This crossfire of dishevelment and suavity provides no end of fascination for Billy, and from it he infers a worldliness that could eat Bravo for breakfast and swallow the bones. This is a man who direct-dials the likes of Al Gore and Tommy Lee Jones and whose movies have featured such money stars as Ben Affleck, Cameron Diaz, Bill Murray, Owen Wilson, two of the four Baldwin brothers and so on, all of whom unfortunately have prior commitments or aren’t interested in a profile-leveling ensemble piece.