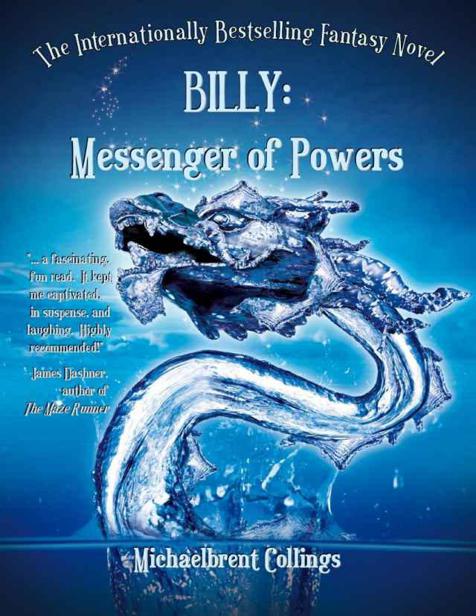 No part of this book may be reproduced in any form

without the expressed written consent

My dad, for teaching me how to write...

My mom, for loving what I wrote even before it was any good...

In Which Billy goes to a New School, and sees a Winking Frog
…

Billy Jones was only fourteen years old the first time he died.

On his first day at Preston Hills High School,
thirteen
-year-old Billy walked through the gate in the chain link fence that surrounded the school where he would be more or less incarcerated for the next four years. He looked around, trying to get his bearings, trying not to let the fear he felt show on his face. PHHS was larger than Preston Hills Middle School had been. It was two stories, with classrooms that Billy could tell were much larger than the middle school’s rooms. The place was huge, with an air of permanence that made it seem as though it had been there forever, catering to the needs of the Older Kids who walked its halls.

I’m actually in high school, Billy thought. But he didn’t have time to decide whether that was a good thing or a bad one, because at that moment another student bumped into him.

The boy was taller than Billy. Good-looking, too, which Billy instantly noticed because he wasn’t so good looking himself. Billy wasn’t
ugly
or anything; he knew no one had ever thrown up from just looking at him. But he was also aware that he was extremely small for his age—only a little over five feet—and his thick blonde hair was far too curly for comfort. Add his halo of golden curls to his diminutive stature, and he looked like a doll. A doll that apparently seemed to scream, “Hey, look at these cute curls? Wouldn’t I be fun to punch?” to the school bullies. Not only that, but Billy’s clothing was not exactly trend-setting. His family didn’t have much money, and Billy mostly wore Salvation Army clothes. So for him “lookin’ good” meant he was wearing clothing that had never smelled like mold or cigarettes.

In contrast, the tall boy who had bumped into Billy and was now staring at him stood on the opposite end of the Coolness Spectrum. Unlike Billy’s raggedly curly coif, the other boy had dark brown hair that was perfectly combed and styled. His clothing was the latest fashion, and worn with the casual distaste that Billy knew only the rich can get away with. No backpack, either: the bigger kid had one of those khaki messenger bags that held half the books and cost ten times more than Billy’s used six-dollar book bag. And the picture of perfection was completed by the boy’s eyes: expressive green eyes that could probably grab any girl in the school with the force of a tractor beam.

Now, those green eyes were glaring at Billy. Billy involuntarily took a step back. “Sorry,” he mumbled. He didn’t know why he said that: the big kid had knocked into
him
, not the other way around.

Still, the boy nodded, as though considering whether to accept Billy’s apology. Then he said, “I’m Cameron. Cameron
Black
.”

The daydream ended suddenly, as Cameron Black took a step toward Billy, looming over him. “Don’t. Ever. Touch. Me. Again,” said Cameron in a low but intense whisper.

Billy gulped. He nodded. The nod was a little more exaggerated than he meant it to be. In fact, it was more of a convulsive shiver, as though he had suddenly discovered his PB&J sandwich was actually made with boogers and pocket lint.

The shudder made Billy’s shoulder move. Just a little. Just enough for his backpack to slide down a bit. As it did, Billy suddenly knew what was going to happen next, as though he was seeing the future through a crystal ball. But in spite of his foreknowledge of the coming catastrophe, he couldn’t stop it from happening.

The backpack slid downward, hanging on the crook of his arm for one slow-motion moment.

The universe contracted, and suddenly the only things in it now were Billy, Cameron, and the backpack.

It hung for a thousand years in mid-air, suspended between his arm and what lay below it. Billy wanted to scream, wanted to grab the backpack. But even a thousand years wasn’t enough time for him to catch the falling bag. Its downward motion was inevitable, unstoppable, like a lead bar dropped from the top of the Empire State Building.

The backpack fell on Cameron’s foot.

Billy watched it happen with horror. Something told him this new occurrence wasn’t good. It was bad. Very Bad, in fact. He knew that his backpack was empty except for pencils and a few sheets of lined paper in a cheap three-ring binder. It couldn’t weigh much. It was soft. But Cameron was now looking at him as though Billy had actually tried to hit him over the head with something a bit bigger and harder—like a car, or the state of Texas.

Cameron grabbed Billy’s shirt. The shirt tore a little, exposing Billy’s thin shoulder. Cameron then pulled Billy to the left, yanking him between a few students who carefully stayed out of Cameron’s way.

Moving precisely, almost carefully, Cameron placed Billy—all five feet nothing of him—in one of the lockers against a nearby wall. It was a close fit: if Billy had been a bigger kid—even a normal sized one, instead of the smaller than average thirteen year-old—he wouldn’t have fit. But he wasn’t a bigger kid. Just Billy. So he
did
fit. Like a hand in a glove. Or, rather, like a Billy in a locker.

Cameron poked a large finger into Billy’s chest. “I’m closing the door now. Don’t try to get out before first bell rings.” He swung the locker shut, then looked in at Billy through the slats in the locker door.

Billy experienced a crazy moment where he wondered if those slats were there to keep kids stuffed in lockers from suffocating: after all, the
books
presumably didn’t care if they had a draft of fresh air now and then. Was locker-stuffing so widespread at this school that they had actually designed the lockers specifically for it?

Billy’s mind was ripped away from this horrifying train of thought by Cameron’s voice. “And don’t tell anyone that I did this. If you do, the only thing that will happen is that I’ll make sure that something awful happens to you.”

Cameron leaned closer to the locker, and as though he had heard Billy’s thought as clear as conversation, said, “Let your imagination run wild, kid.”

Billy did. It wasn’t a pretty sight. The image his brain coughed up involved a toilet in the student bathrooms, a blindfold, a rabid great white shark, and several baseball bats with nails sticking out of them.

A minute later the first bell rang. Billy was officially going to be late on his first day at school. He pushed on the locker door to see if it would just spring open from the inside. It didn’t, of course.

He began knocking on the inside of the locker, hoping some other late student would hear his tapping and let him out.

Then gave a little shout.

Then he gave a bigger shout.

He banged on the door of the locker.

He pushed with all his might on the inside of the door, bracing his feet against the back of the locker so that he could use his full body weight. This turned out to be bad timing on his part, because the door suddenly opened, and Billy lost his balance, falling to the sidewalk in front of the lockers.

The first thing he saw was his backpack, still laying where it had fallen about a dozen feet away.

Well, thought Billy, at least it didn’t get stolen. Apparently the school didn’t admit thieves. Just good-looking psychopaths who were proud members of the We Hate Billy club.

The second thing Billy saw was a foot.

It was right in front of him. The foot was wearing a clean white sneaker. Above the sneaker was an ankle-high sock. Above that was a bare ankle, which—as he knew ankles tended to do—gradually turned into a leg as Billy’s gaze continued to rise.

Billy was only thirteen—his fourteenth birthday was still two months off—and he was, as his father put it, “young for his age.” He knew that was code for saying he looked more like a sixth-grader than someone starting high school. And perhaps as a result of that, he hadn’t really “discovered” girls yet the way that some of his classmates had. He didn’t really get some of the jokes he overheard them telling, or the way they talked about them in the halls before class.

In spite of his admitted lack of knowledge, however, Billy
did
know what a girl’s leg looked like. And this was definitely a girl’s leg. A nice one, too.

Billy’s gaze continued to rise up the leg, to the shirt, to the neck.

By the time he reached the girl’s head, Billy felt dizzy. He wasn’t sure if that was because of a lack of oxygen in the locker, or the fact that he was still on the ground craning his neck to see up, or because the girl was simply the prettiest girl he had ever seen.

The next moment, however, Billy was pretty sure that his dizziness was caused by the last reason, because his heart suddenly attempted to take a three-foot step to the left, not minding that there was a ribcage in its way. At the same time, Billy felt his stomach try to jump out through his face, and he was pretty sure that his toes turned inside-out.