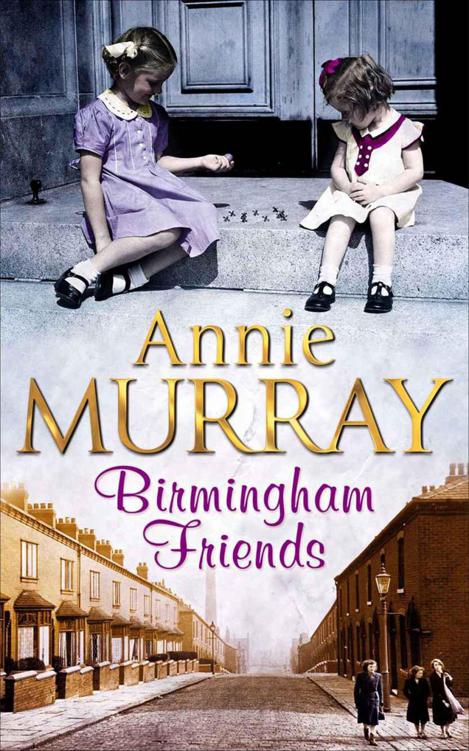 Anna has always been exceptionally close to her mother, Kate and as a child, was captivated by the stories her mother would tell of her childhood in Birmingham with her best friend, Olivia. Olivia and Kate seemed to have a magical friendship. But when Kate dies, she leaves her daughter a final story, one that this time tells the whole truth of her life with Olivia Kemp. As Anna reads, she is shocked to discover how little she really knew about the mother she felt so close to. With Kate's words of caution ringing in her head, she goes in search of the one woman who can answer urgent questions about her mother's life, and about her own...A remarkable, stirring novel, "Birmingham Friends" perfectly captures the complicated intimacy of female relationships.

In fact in almost every family, one sees a keeper, or two or three keepers, and a lunatic.

My mother is dead.

Anna repeated these words to herself, still trying to make it real as they walked along the cemetery path under the dripping trees: rain had fallen briskly after a hot day, clouds piling suddenly across the blue. Smoke was still wafting from the squat chimney of the crematorium. These places removed death so far from you.

But she had seen Kate dead. The day of the Royal Wedding, when the hospital was festooned with red, white and blue, flags waving on the ward TV and everyone carrying on about Diana’s dress. The nurses put a yellow rose between the papery flesh of Kate’s hands. And they prepared Anna for days before by avoiding her eyes, by which she knew for certain Kate was dying. It was obvious anyway. The cancer sucked her down to a tight-skinned puppet, eyes closing against the world. Astonishing that a woman as big as her mother could ever shrink so thin.

She sat quietly touching Kate’s arm for an hour or more after she died, though the moment it happened she knew her mother was gone, absolutely. Mom. Strange and silent. She didn’t know then that the changed form on the bed was more of a stranger than she imagined. Kate was the one person of whose past she thought she could be certain. She had known it the way a child knows the rhythm of a fairy story, secure and unchanging for thirty-four years. Until yesterday. Why couldn’t she have said something before it was too late?

‘Sure you wouldn’t like me to drive you, my dear?’

Anna smiled, squeezing the fleshy arm that was linked with hers. ‘No, I’m fine thank you, Roland. And I’m sure it’s me who should be offering you. You’re the one who’s been of most support to her.’

The chubby cheeks next to her creased into a melancholy expression. Now his hair was so thin on top, Roland’s face seemed even more naked and expressive. ‘Not a lot I wouldn’t have done for the old girl – you know that.’

She nodded. ‘Yes. I think I do. I’ll go and face the house. But it’d be lovely to see you again – soon. I haven’t been coming back often enough, I know that.’

Roland gave her hand a final pat as if to absolve her from any sense of guilt, put his little tweed hat back on his head, and with his usual supreme tact walked on ahead of her. She watched, eyes full of affection. He was squeezed into an ancient black suit, a fraction too small, and the hat looked quite incongruous with it, but that was all Roland – one of the things for which they had loved him.

Not wanting to run into anyone else, she followed swiftly past immaculate borders of marigolds to the wrought-iron gates. As she reached her car, the clouds started to let rain fall.

The cutting from the
Post
about Kate’s retirement was pinned to the noticeboard in her kitchen with a yellow-tipped tack.

‘“Aunt” Kate to retire after forty years’, it read, and beside the caption a photograph of Kate’s round face beaming at a baby in her arms. She was restraining the plump hand that was reaching up towards her face.

‘He was a little demon,’ Kate had told Anna, laughing. ‘He was determined to pull my glasses off!’

Kate Craven, known as ‘Aunt’ by generations of the city’s children, retires this week after nearly forty years’ Health Visiting.

A motherly, if often outspoken character, Kate will not be forgotten by the many women whom she has advised and supported over the years.

Her career began in 1938 as a nurse at the General Hospital and in her time she worked in most areas of South Birmingham, as well as being an ardent promoter of Health Education in schools.

From her final post at Poplar Road Clinic in Kings Heath she was given a send off today by staff and parents.

‘She’s a lovely lady,’ said one mother of three. ‘Flexible, honest, and always kind. Everyone will miss her.’

Anna stared at the picture again, the smile on that round, generous face.
What is all this? What have you kept from me?

The phone started ringing. She knew it was Richard. She should have unplugged the thing.

‘How was it then?’ he said. She could picture him standing in the hall of their house in Coventry, still in his casual social-worker clothes, moss-green cords, brown jacket, shirt open at the neck. No tie of course.

‘It was a ball, what d’you think?’ He should have taken the day off and been there with her.

‘So you’re not coming back tonight then?’

‘No,’ she agreed flatly. ‘I’m not coming back tonight. Nor tomorrow. I’ve got all the house to sort. There’s no point in driving up and down now it’s the holidays, is there?’

‘If you say so. Only I could do with the car. It’s a bit awkward.’ There was a sigh in his voice, but then he always sounded rather long-suffering on the phone.

She tried being conciliatory. ‘All right, I’ll come over tomorrow night. I’ll be able to use Mom’s car – OK?’

‘I could cook,’ Richard offered.

‘That’d be nice,’ she said, thinking she’d believe it when she saw it. ‘How was today?’

‘A pain. Delays in court all morning. Gerry Kinsella this afternoon.’

Gerry was one of Richard’s most intractable probationers. Normally she’d have felt obliged to ask about it. Today she didn’t think she’d bother.

Richard sighed wearily. ‘I suppose I’d better go and find something to eat then.’

Anna put the phone down hard and said to it, ‘You’ve just lost your mother, Anna, so how are you feeling? Well funnily enough I’m pretty cut up about it, Richard. Really nice of you to think of asking.’

The box, with its card pinned to the top, ‘
FOR ANNA
’, was in one of the bedroom drawers.

She had not been long in the house when she started prowling restlessly round the rooms, as if to make absolutely sure it was empty. The bedroom door opened with a squeak and she felt her palms sweating, somehow nervous of invading Kate’s privacy. It was a pretty room: floral curtains and bedspread to match in soft pinks and greens, and a cream carpet with sprigs of pink roses. Kate had moved into this house only a year ago, preparing for retirement and a bigger garden. Anna remembered the austerity of her mother’s room when she was a child, the brown lino and old iron bedframe, the lodgers.

She opened the wardrobe and looked inside, but found at once that she couldn’t bear it. Kate’s clothes, her shape, the skirts limp and slightly pushed out at the back from being sat in, the broad, still creased waist-bands. And shoes, her second, very personal skin. Kate’s shoes, squatting there in the bottom of the wardrobe, defeated her. She lay on the bed, her hair draping her face like a shroud, and cried. She hugged the flowery quilt with its familiar scent, trying to feel her mother’s once plump arms round her, soothing her out of the pain of her own death.

It was after this she found the box, a carton covered with Christmas wrapping paper. Inside were a photograph, two letters and a thick bundle of paper pushed into a pink file. These were all tied together with the thin white elastic Kate used to thread through Anna’s school socks to keep them up.

She had never seen the photograph before. It was from an old newspaper, the paper yellow and the print grainy. She knew at once that the two children in the picture were Kate and Olivia. There had evidently been bright sunlight in their eyes, adding crinkled noses to their smiles. It was quite obvious which was which. Kate’s wide, friendly face, the glasses, well-defined eyebrows above them, her dress looking a bit too small. And Olivia, beautiful right from the first. Anna squinted at the image. She had never seen any picture of Olivia before. She was thin, shorter than Kate, with a mass of wavy hair and dark eyes which dominated her face. Her dress was of a pale, frothy looking material. Anna thought she could just make out the tips of Olivia’s fingers round Kate’s waist. Beside the two of them stood a very tall dark-haired man, and behind, a ring of people watching a roundabout, its movement slightly blurred in the picture.

Handwritten in the margin were the words,
Onion Fair. Birmingham 1929
. The girls had been eight then, though the writing in blue biro looked recent.

Anna picked up the shortest of the letters. It was on a good quality sheet of blue paper. Beneath the Birmingham address appeared a mere lineful of words written with beautiful evenness: ‘I’m here to stay now.
Please
. Olivia.’

Anna’s heart started to beat faster. So often at story-time in her childhood: ‘Mummy, tell me a story about you and Olivia when you were little girls.’ And Kate had seemed to relish this talk while Anna sank into sleep. Idyllic summers spent in the languid gardens of Moseley, their endless talk, piano playing, their laughter and games. Talented, lovely Olivia, who was killed in the war in 1944.

Anna looked up slowly, frowning. The date at the top of Olivia’s letter was December 1980.

She reached for the pink file.

Miss Pardoe’s voice rang down the school corridor. I jumped guiltily, wondering what I’d done wrong. When Mummy spoke to me in that tone it meant Trouble. I had forgotten for a second that that was the way Miss Pardoe always talked.

‘Come here,’ she commanded. I walked up to her, trying to interpret the expression on her handsome face. At least she didn’t look cross. ‘It’s all right. You’re not going to be punished. I’ve a little job for you. Olivia Kemp has been taken ill, and I’d like you to go and sit with her until she goes home. You’ll find her in the lost property room.’

I scowled at Miss Pardoe’s back as she strode off towards the staff room. Just my luck.

The lost property room was a narrow hole next to the changing rooms with a cold stone floor and a stained enamel sink on one wall. There were a couple of hard, ink-stained chairs inside and a small cabinet screwed to the wall, always locked and containing a rudimentary first aid kit. Apart from that there were two disintegrating baskets into which were thrown any items of lost clothing or kit found round the school. The room stank of sweaty Aertex and rubber pumps, and there was only one high little window, so it was gloomy as well as smelly.