Read Birth of Our Power Online

Birth of Our Power 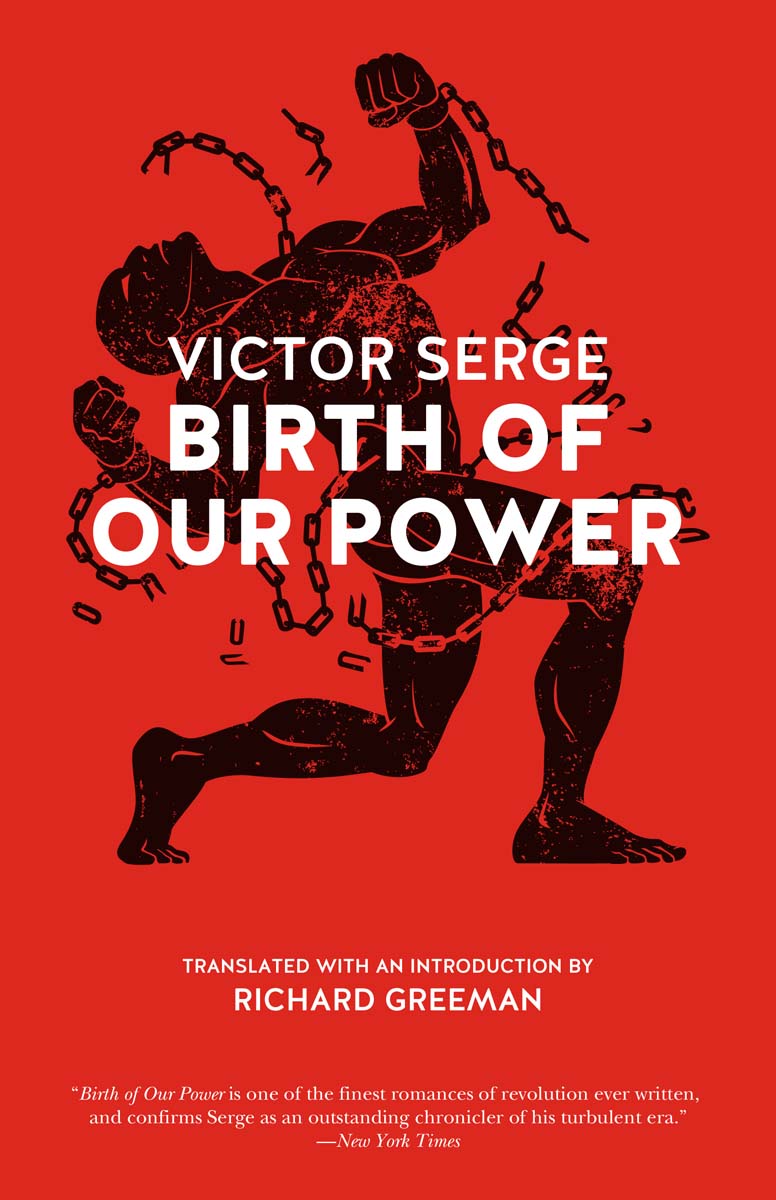 Praise for
Birth of Our Power

“Nothing in it has datedâ¦. It is less an autobiography than a sustained, incandescent lyric (half-pantheist, half-surrealist) of rebellion and battle.”

“Surely one of the most moving accounts of revolutionary experience ever written.”

“Probably the most remarkable of his novelsâ¦. Of all the European writers who have taken revolution as their theme, Serge is second only to Conradâ¦. Here is a writer with a magnificent eye for the panoramic sweep of historical events and an unsparingly precise moral insight.”

“Intense, vivid, glowing with energy and power â¦ A wonderful picture of revolution and revolutionariesâ¦. The power of the novel is in its portrayal of the men who are involved.”

“Birth of Our Power
is one of the finest romances of revolution ever written, and confirms Serge as an outstanding chronicler of his turbulent eraâ¦. As an epic,
Birth of Our Power
has lost none of its strength.” 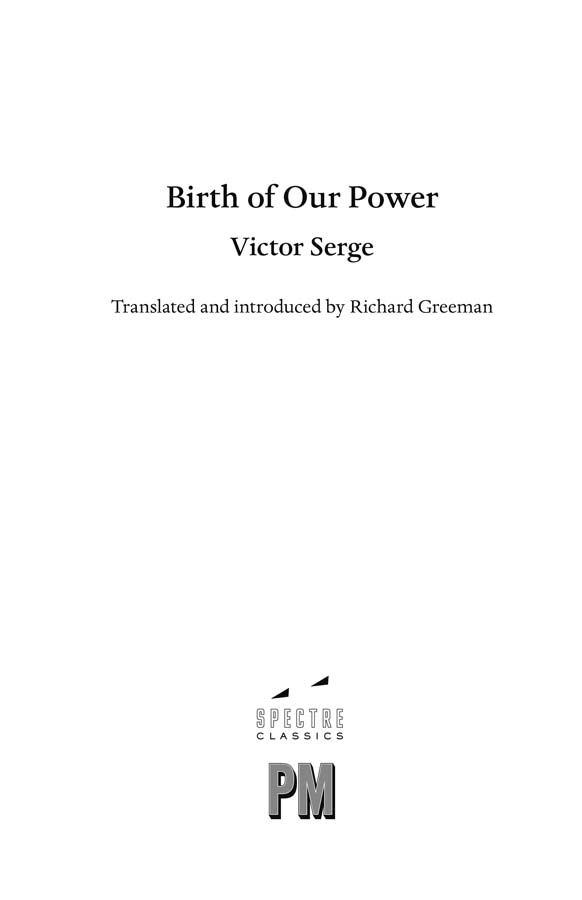 Spectre is a series of penetrating and indispensable works of, and about, radical political economy. Spectre lays bare the dark underbelly of politics and economics, publishing outstanding and contrarian perspectives on the maelstrom of capitalâand emancipatory alternativesâin crisis. The companion Spectre Classics imprint unearths essential works of radical history, political economy, theory and practice, to illuminate the present with brilliant, yet unjustly neglected, ideas from the past.

Greg Albo, Sam Gindin, and Leo Panitch,
In and Out of Crisis: The Global Financial Meltdown and Left Alternatives

David McNally,
Global Slump: The Economics and Politics of Crisis and Resistance

Sasha Lilley,
Capital and Its Discontents: Conversations with Radical Thinkers in a Time of Tumult

Victor Serge,
Birth of Our Power 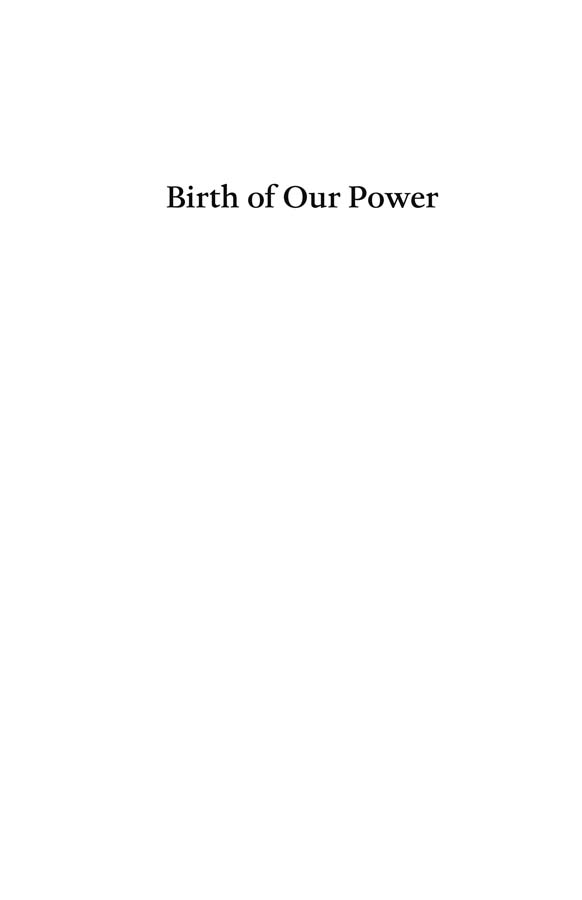 Birth of Our Power

Printed in the USA by the Employee Owners of Thomson-Shore in Dexter, Michigan.
www.thomsonshore.com

Birth of Our Power
is an epic novel set in Spain, France, and Russia during the heady revolutionary years 1917â1919. It was composed a decade later in Leningrad by a remarkable witness-participant, the Franco-Russian writer and revolutionary Victor Serge (1890â1947).
1
Serge's tale begins in the spring of 1917, in the third year of insane mass slaughter in the blood- and rain-soaked trenches of World War I, when the flames of revolution suddenly erupt in Russia and Spain. Europe is “burning at both ends.” In February, the Russian people overthrow the Czar, while in neutral Spain militant anarcho-syndicalist workers allied with middle-class Catalan nationalists rise up in mass strikes aimed at taking power. Although the Spanish uprising eventually fizzles, in Russia the workers, peasants, and common soldiers are able to take power and hold it.
Birth of Our Power
chronicles that double movement.

Serge's novel follows an anonymous narrator's odyssey from Barcelona to Petrograd,
2
from one red city to the other, from the romanticism of radicalized workers awakening to their own power in a sun-drenched Spanish metropolis to the grim reality of workers clinging to power in Russia's dark, frozen revolutionary outpost. Where Dickens constructed his
Tale of Two Cities
around the opposition between conservative London (âwhite') and revolutionary Paris (âred') Serge's novel is based on the opposition of two cites, both red: Barcelona, the city âwe' could not take, and Petrogradâthe starving capital of the Russian Revolution, besieged by counterrevolutionary whites.

Like Homer's Odysseus and Virgil's Aeneas, Serge's nameless narrator is fated to pass through the Underworld on his two-year odyssey from the defeated revolution to the victorious one. He spends over a
year in French World War I concentration camps for subversives. The novel ends in Petrograd with something of an anti-climax: The city of victorious revolution, the city where âwe' have taken power, is revealed not as a vast tumultuous forum, but as a grim, half-empty metropolis, “not at all dead, but savagely turned in on itself, in the terrible cold, the silence, the hate, the will to live, the will to conquer.”

Whereas the defeat in Barcelona is partially transformed into a victory by the heroic exaltation of the masses newly awakened to a sense of their own power, in Petrograd, the original question of “Can we take power?” is superseded by an even more difficult one: “Can we survive and learn to use that power?” The novel thus plays on the ironic themes of âvictory-in-defeat' (Barcelona) and âdefeat-in-victory' (Petrograd).

Serge lived it all. The novel follows its author's own two-year itinerary across war-torn Europe from an aborted revolt in Spain to the promise of a victorious revolution in Russia, but strange to say, the novel is not really autobiographical. Serge's anonymous narrator is little more than a âcamera eye' giving multiple perspectives on the action. He has no personal life. He never gets to speak a line, only to observe and narrate. Indeed, the pronoun âI' appears only once or twice per chapter. The fraternal âwe,' the first-person plural, is Serge's preferred part of speech, beginning with the very first sentence, indeed with the title.