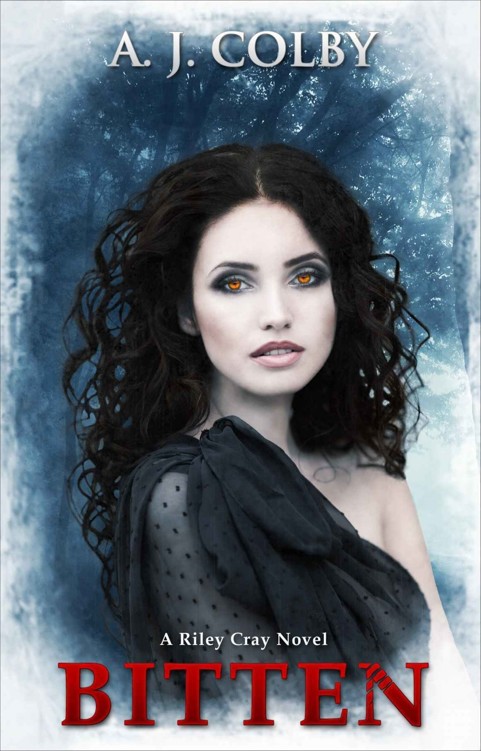 Want to know when I have a new book out?

Being a lone wolf could be Riley’s greatest strength, or her greatest weakness...

After surviving her psychotic ex-boyfriend’s quest for revenge, Riley Cray was ready to settle back into her quiet life and fade into obscurity. The Shepherd of the City, Alexei Cordova, however, has other plans for the lone werewolf. Someone is murdering supernaturals under the master vampire’s protection, and he wants Riley to figure out why.

Relying on the help of her friends and her paltry knowledge of the supernatural world, can Riley discover who the murderer is before Denver is consumed by a war between vampires and werewolves?

Watch out. This bitch bites!

Mum and Dad, thanks for always believing in me, even during that “weird” phase I never really grew out of.

I WAS PICKING at a box of cheap Valentine’s chocolates I’d picked up at the small grocery store in town when a cricket chirped in the middle of my kitchen.

It took me several seconds to realize that a giant cricket hadn’t crawled through the floorboards with plans of world domination, and it was in fact my shiny new cell phone. My boyfriend, Special Agent Darius Holbrook of the FBI, had gotten me the annoying contraption after my psychotic ex tried to turn me into a piñata. At least, I’d thought he was my boyfriend, given our shared close brush with death and all the sex we’d been having for the past few months. But the distinct lack of flowers, chocolate, teddy bears, or any other clichéd Valentine’s trinket left me in doubt.

I felt like a sulky teenager, and that pissed me off.

I didn’t recognize the number flashing on the glossy screen, but that wasn’t surprising since he was out of town on some super-secret, hush-hush case and was probably calling me from the local cop shop or his hotel room.

“You’d better be preparing those pipes to do some serious serenading, mister,” I said by way of a greeting.

“Aw, did your
Special
Agent forget about you on Valentine’s Day?” a sultry voice asked on the other end of the line, the mere sound of it raising my hackles and rousing the wolf deep inside.

“Chrismer,” I snarled. “How the hell did you get this number?”

“Really, Cray? What kind of journalist would I be if I couldn’t track down a simple phone number?” she asked, her smugness oozing through the phone. For what had to be the hundredth time during our acquaintance, I felt the desire to pummel her face into a bloody pulp.

“One with integrity?” I shot back, smirking at her annoyed huff. I sighed when she said nothing. “What do you want, Chrismer?”

Ice ran through my veins at her simple words. Jessica Chrismer, the media darling who had dogged me mercilessly through the trial of my serial-killer werewolf ex-boyfriend, was the Day Servant to master vampire Alexei Cordova. Cordova happened to be the Shepherd of the City for Denver, which was more than just a fancy title. He was the leader and protector for the supernatural community of Colorado, but if the rumors were to be believed it was more like judge and jury. He was not someone I wanted to get mixed up with. I liked my quiet life and wished that everyone would let me get back to enjoying it.

“I’m not sure what the hell a master vamp would need a graphic designer for, but hey, a girl’s gotta eat,” I said, knowing full well she wasn’t talking about my work as a freelance graphic artist.

“I hope you’re not looking to become a comedian, Cray,” Chrismer deadpanned. “I wouldn’t advise giving up your day job.”

Sheesh, does Cordova suck out her sense of humor along with her blood, or did she have to have it surgically removed to become a reporter? She should have asked them to remove the stick in her ass while they were at it.

I popped another chocolate in my mouth. “You’re no fun. So what does your esteemed Lord Fancy Pants want?”

Her anger all but vibrated down the phone line along with an irritated sigh, and I relished the mental image of her glaring red faced at the phone, for once not the picture of polished perfection.

“Against my explicit counsel, he believes that you may be able to assist us with a political matter.”

For a moment I thought I had heard her wrong. “Did you say political matter?”

“As much as I hate to admit it, I’m gonna have to agree with you on this one. I don’t know the first thing about politics, and I’m not exactly known for my subtlety.”

“That is precisely what I conveyed to my master, but he insists.” Somehow, she managed to make her agreement sound like an insult.

“And if I say no?” I asked, sure that I already knew the answer.

Chrismer’s voice crackled with cool energy when she replied. “That would be most unfortunate.”

The hollow echo in her voice, as if it was coming from somewhere deep underground where darkness reigned and monsters slept, sent a shiver down my spine. I was grateful for the bright winter sunlight streaming in through the window above the kitchen sink.

“Unfortunate for whom?” I pushed, trying to hide my unease behind a layer of bravado, though I still had to bite the side of my tongue to keep the scared tremor out of my voice. “You or me?”

A rich chuckle oozed through the phone, making me shudder. As sexy as some people might have found it, there was not a single molecule in my body that was titillated by the sound.

All I wanted to do was run far away. So why was I teetering on the edge of agreeing to whatever this job might be?

Rubbing my fingers along the crease in my brow I asked, “Is this a paying gig?”

“I’m sure we can come to some sort of mutually agreeable arrangement,” came the silken reply as Cordova stopped pretending that he wasn’t hijacking his Day Servant’s mind to convey his message.

Ew, I’m being hit on by an undead perv.

Before Chrismer, or rather her master through her, could get any funny ideas I replied, “I’m only interested in cash.”

“So, are you in or not?” Chrismer asked, her voice holding its usual irritation and none of the otherness that had made my skin crawl mere seconds before.

“I know I’m going to regret this, but...” I began, sparing a glance for the refrigerator that I knew held only a half-empty bottle of ketchup, three slices of cheese, and a slice of pizza that was starting to grow hair. It had been a slow couple of months in the graphic design business, no doubt thanks to my recent resurgence into the public eye. I guess no one wanted to hire someone associated with the state’s most renowned serial killer. The fact that I’d been the one to end his reign of terror evidently didn’t win me any brownie points. I was beginning to scrape the bottom of the barrel when it came to my savings and I was glad my grandparents had paid off the cabin or I’d have been reduced to sleeping in my Jeep weeks ago. “Yeah, I’m in.”

“Great,” Chrismer said, though her tone implied that she thought it was anything but. Again, I had to agree with her. “Katarina will draw up the papers and courier them to you later today.”

“Vamps being legit and above board. Who’d have thunk it?”

“Like I said, don’t give up your day job, Cray,” she said before hanging up on me.

Looking wide-eyed at my large Siamese, Loki, who was watching me from the back of the couch, all I could say was “That bitch hung up on me. Can you believe it?”

If the lazy swish of his tail was any answer, it came as no surprise to him. Then again, it shouldn’t have been much of a surprise to me either. I set my phone down gently, still afraid of breaking the damn thing. Leaning back in the chair I popped another chocolate in my mouth while pondering my current predicament.

After several minutes of wondering just how much shit I’d signed myself up for, I blinked and looked down at the phone resting innocuously on the tabletop.

I really shouldn’t have answered the damn thing.

A sudden flare of irritation tore through me, bringing the wolf dangerously close to the surface, the telltale itchiness in my eyes letting me know that they had begun to bleed over to wolf gold. Squeezing them shut I drew a deep breath, holding it for the count of three before exhaling in a long, ragged rush. I repeated the action four more times before springing up to my feet and pacing back and forth in my sunny kitchen, flexing my hands at my sides.

“This is all his fault!” I declared. “If he hadn’t insisted on getting me that god damned thing she couldn’t have called me!”

Stalking past the kitchen table again, I studiously ignored the avocado green phone hanging on the wall.

It’s not like she couldn’t have called the landline or anything,
the snide voice in the back of my mind added.