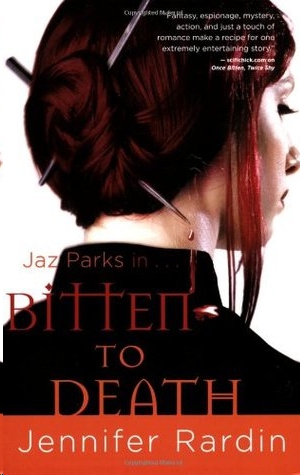 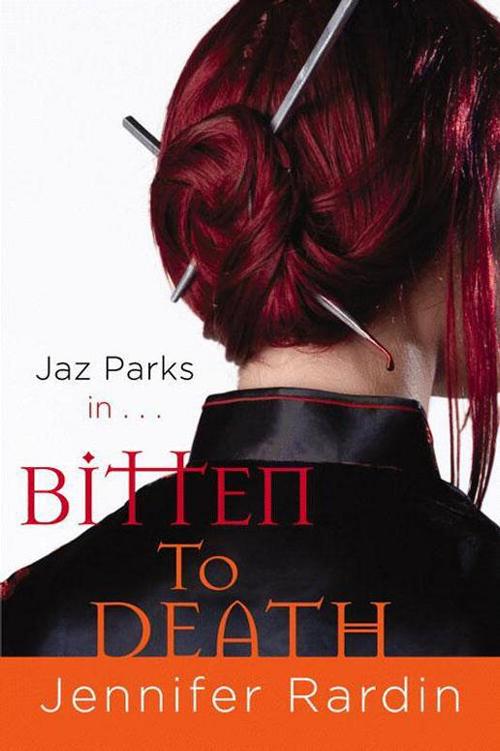 He turned his head slightly, his short dark curls indifferent to the late-April breeze coming off the mountain at our backs. Managing to keep an eye on my target, as well as whatever vamps might come pouring out of the sprawling sand-colored mansion to check on him, Vayl said, “Are you sure you recognize this fellow?”

“He’s the one,” I hissed. “I just saw the report on him last week. Name is Alan Binns. He’s wanted for murder in three countries. His specialty is families. The pictures were—”
Gruesome
, I thought, but I choked on the word. The twitch of Vayl’s left eyebrow told me I was on a roll. Thing was, at the moment, I didn’t give two craps about our little game.

The Vampere world might be all about superiority, which was why we’d needed to make a power play the minute we crossed their threshold. But I’d have popped this bastard just to erase another monster from our hit list. In fact, that we should personally benefit from his takeout made me feel almost dirty. I know, I know. As assistant to the CIA’s top assassin, I shouldn’t make moral judgments. But that had never stopped me before.

“You can’t prove anything,” snarled Binns, whose dirt-brown, shoulder-length hair did nothing to disguise his bulging forehead.

“I don’t
have
to, you idiot!” I snapped, wishing I could break my rage over his head like a vase full of cobras. “You
others
have so few legal rights they could fit on the back of my passport photo. That leaves me free to smoke you if I feel you’re a clear and present danger to society. Which you are.”

“What is the meaning of this? What are you strangers doing in my courtyard at ten o’clock in the evening!” demanded the woman who steamed out one of the villa’s blue-framed back doors, all four of which were flanked by solar lamps made to resemble antique streetlights. The elongated sleeves of her black chiffon gown batted the air behind her, making her resemble an enraged homecoming queen candidate—one whose friends had voted for the other, uglier girl. Though her mega-gelled version of beauty could have landed her a closetful of pageant tiaras, her psychic scent hit me between the eyes so hard I felt like I’d been drop-kicked into a garbage dump. What the hell kind of vamp
was
she?

Vayl turned to intercept her, placing the tiger-carved cane he always carried firmly on the gray pavers between them. She stopped three feet from it, rearing back like she’d hit an invisible wall. Her eyes, the liquid brown of stale coffee, widened as a how-dare-you look tried to settle on her face. It faded almost immediately, as if she’d undergone a recent Botox treatment and couldn’t sustain any expression that might leave evidence of emotion.

I struggled not to stare. My job did require some concentration, after all. But her scent, combined with the eye-strafing she gave Vayl, tempted the busybody in me. I forced my gaze back to Binns. He’d taken half a step forward. I smiled at him.
Come on, asshole. Make it easy
. He stopped.

“What are
you
doing here?” the woman snarled.

For a second I thought Vayl was going to freeze her like an MRE, his powers spiked so suddenly. Then he said, “I heard you were dead.”

Out the corner of my eye I saw her throw her head sideways, as if to dodge a bitter memory. “Hardly,” she replied, her voice higher and tighter than before. “Hamon and I might have had a slight . . . disagreement. But that was settled years ago.”

“Where
is
your
Deyrar?
” Vayl asked.

I searched my mental dictionary, my limited Vampere vocabulary coming up with one of its few complete definitions. The
Deyrar
was the supreme leader of a secretive vampire community called a Trust. He was like a king, only less prone to gout and gambling addiction.

She drew herself up to her full height, maybe five-foot-one, and said, “
I
am the
Deyrar
.”

Vayl and I don’t have a psychic link. But we’re close enough to say a ton with one stricken look.

Are we screwed?
I asked him with puckered eyebrows.

A valid question, Jasmine,
his narrowed gaze replied.
Obviously she was not expecting us. Which means she knows nothing about the deal
.

Our agreement had been with Hamon Eryx, the (deposed?) leader of the vampires who packed the mansion before us. Together they formed one of a network of worldwide Trusts. Vayl himself had lived with this particular group nearly a century ago.

We’d been asked to come to Patras by Eryx himself, a canny old sleaze who’d promised us safe passage in return for a shot at Edward Samos, aka the Raptor. Samos had either attempted or committed enough acts of terrorism in the past few years to raise him to the top of our department’s hit list. He’d also written to Eryx offering an alliance. Eryx wasn’t interested, but because he knew everyone who refused Samos’s advances ended up dead, he’d asked Vayl to intervene.

Now the
Deyrar
had been replaced, which meant our whole mission could be junk before it even came out of the box. Plus, we were standing in the middle of a well-established Trust. Any minute now we could be surrounded by fifteen to twenty vamps and their human guardians, who’d be psyched to have an excuse to disembowel us. Those goofy Vampere. Anything for a giggle.

As if he’d read my mind, a Mr. Universe candidate burst out the same back door the
Deyrar
had just exited. His appearance made me seriously consider smoking my target just so I could stand and stare. He went shirtless, though Grecian springs are cool and the temperature currently hovered around sixty degrees. From the look of that sculpted bod I estimated his workout took a three-hour chunk out of his daily schedule. It wouldn’t have made a difference if he was a vamp. But he was all man. The kind photographers feature on the covers of books with titles like
Forbidden Folly
and
Wesley’s Wench
.

“Disa, the party’s ready to start,” he said eagerly. He looked at Vayl, starting slightly, as if he’d only just seen him. “Who’re you?” he demanded.

“I am Vayl. And this is Lucille Robinson.”

“Did you know I killed her?” he sneered. “I kill everybody I meet named Lucille, Lucille. Lucy Lucillia Robin—”

“Shut the fuck up before I cut out your tongue!” I snarled.

I blew my breath out through my nose, trying to keep anger from shredding my better sense. Because I knew what he was trying to pull.

Vayl had explained that in the Vampere world, knowing someone’s name could give you power over them. Which was why Hamon Eryx had insisted on trading birth certificates. Vayl had, in turn, demanded that Eryx keep my personal info secure. Meaning everyone else in the Trust should get my favorite fake ID. I sure as hell would’ve picked another if I’d known it was going to set Binns off. Not because it disturbed me. But because I didn’t want to kill him out of anger. So unprofessional.

Cover Boy, noting Disa’s displeasure at my foul mouth, asked, “Do you want me to kill them?”

I tried not to gape. After all, I was holding a loaded weapon. Could he
be
that dumb?

“No, Tarasios,” Disa said tiredly. “Get the rest of the Trust.” As he bobbed his head and went back inside, she turned her glare to me. “So you are Vayl’s . . .” She raised an eyebrow, gave me
that
look. The one that said,
Hey, even vamps who’re trying to blend gotta get their blood from somewhere. So what about it? Are you Vayl’s very own, personal Slurpee?

I gave her empty eyes as I said, “I’m his assistant,” then zoomed back in on Binns. He was beginning to relax. Starting to believe his
Deyrar
would tow him out of this jam. His gaze dropped to his front pocket just before his right hand tried to follow suit. So I shot him.

He staggered. Stared down at the bolt sticking out of his left shoulder. Looked up at me in shock. “Why did you do that?”

“Hair trigger,” I said. Maybe not, though. He liked to torture his victims before he killed them, half of whom had been under the age of twelve. And the more I obsessed about his MO, the less control my brain seemed to exercise over my hand. “I suggest you stand very still now. Wouldn’t want you to have a nasty accident before I settle on your future plans.” In the deep silence that followed, all I could hear was the whir of well-oiled machinery as Grief automatically loaded another bolt into my crossbow.

I glanced at Disa just in time to see her eyes go through major changes, moving from brown to black, red to orange and bright yellow before fading back to brown. It happened so quickly it felt like watching a retro rock video in fast-forward.
Psychedelic, man. And kinda nauseating
. The only other vampire I knew whose eyes transformed with his emotions was Vayl. Did that mean the entire Trust had the ability? Or had he and Disa—
naw, don’t be silly, Jaz. You’re just being suspicious because . . .

Well, because on our last mission Vayl had nearly gone off the deep end. Had almost trashed whatever future we might hope for by taking the blood of an Iranian Seer named Zarsa. We’d survived that seismic shift. That didn’t mean another wouldn’t destroy us.

“How dare you attack my
knaer?
” Disa demanded.

Why can’t we all speak English today? Seriously, I’m going to have to get Bergman started on some kind of universal translator. Now, what did Vayl say a
knaer
was? Some kind of jelly roll? No, dipshit, that’s what you ate for breakfast. This has something to do with Trust hierarchy. That’s right, power-wise, the
knaer
operate at about twenty-five watts. Only the humans put out less heat than them.
I’d picked the right vamp to harass.

I gave Disa my most intimidating stare. “Alan Binns is an enemy of the people I’m sworn to protect,” I said. “And
you’re
harboring him. Makes me wonder what other filthy secrets you’re hiding.”

She swung her head around, probably searching for something to throw. Luckily they hadn’t left much in the way of portable Jaz trashers in the backyard. I watched her fists clench and hoped the next phase would involve stomping and screaming. My entertainment quota for the month had already fallen way below par.

Unfortunately, before Disa could wind it up a notch, her vamps and their human guardians came pouring through the villa’s back doors, exclaiming angrily when they saw their wounded bud and pinning me with hostile glares when they realized I’d done the deed. Again the balance had shifted. I glanced at Vayl. He gave me a nod and the slight lift of his lips that passed for a smile. Warped souls that we are, we kinda love it when our odds dip. Because that’s when the real fun begins.