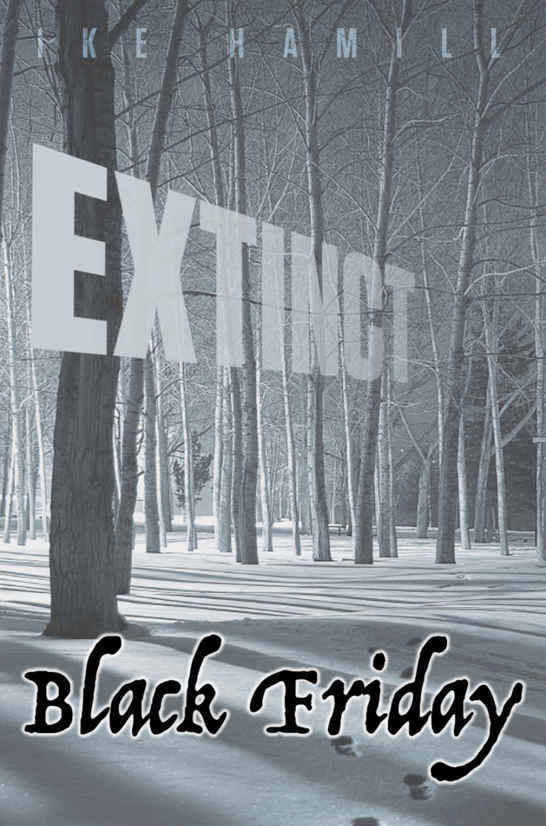 This book is a work of fiction. All names, characters, places, and events have been fabricated only to entertain. This book may not be reproduced in whole or in part without the consent of Ike Hamill.

This is dedicated to everyone I still miss.

This novella is a sequel to
Extinct
. If you haven’t read
Extinct,
it’s available in eBook and print. If you can’t find a copy, let me know and I’ll help you track one down.

T
HE
WIND
WOKE
HIM
up, and he flopped his gloved hands from underneath a pile of sweatshirts on his lap. Robby blinked his eyes and they adjusted quickly to dim moonlight. He was looking through a windshield at the parking lot of a rest stop on I-95. Nothing on the other side of the glass moved except the waxing and waning shadows. The moon’s light filtered through the raveled blanket of clouds overhead.

Robby shivered with the recollection, and from the cold. The driver’s-side window beside him was shattered—he had broken it with a jack handle when he’d stolen this Volvo from its dead owner. The socks and shoes on his feet belonged to that dead man as well.

Robby looked up to the car’s visor, at the mirror mounted there. He remembered the trick he’d discovered earlier that evening. If he looked in the mirror and saw his eyes, they looked just like his father’s eyes, and that gave him confidence. Robby moved forward a little to perfect the trick.

He could barely make them out in the dim light, but when he saw his father’s eyes in the mirror, he heard his father’s voice in his head—“
You should switch cars, Robby. Find one without a broken window.
”

Robby whispered back to himself—“They won’t have keys in them. I’d have to go search one of those corpses and find their keys. I don’t want to search any bodies in the dark.”

“It’s too cold, Robby. It can’t be more than fifteen degrees out, and you’re already shivering. You can run the engine for the heat, go in that building, or find another car, but staying here is not a smart option.”

“I’m not going back in there,” Robby whispered. “Not at night.”

A flash drew his attention away from the mirror. He let his eyes wander over the parking lot and wondered where the flash had come from. It could have been the moonlight reflecting off of something, but what? Robby scanned the parked cars and looked for one with a body close to it. Most of the corpses were stretched out on the sidewalk in front of the rest stop’s main entrance, but he figured he might find one close to a car. It might not be so bad to search a body if it were all on its own, away from the big group of corpses.

This time, he saw the flash.

It was a blue streak, like faint lightning, and it traveled from right to left, the wrong way down the middle of the highway. Robby held his breath and waited for it to come again. He ran out of air and had to gasp for more, but the flash didn’t come.

He glanced up to the mirror.
“That can’t have been natural,”
his father’s voice said in his head.

Robby nodded in response. He returned his eyes to the highway.

He reached to turn the key and start the engine but then pulled his hand back. Where would he go? The only way in or out of the rest stop was by the highway.

Two more blue streaks flashed down I-95, only a second apart.

Robby bit his lip and tried to think. He could be counted on to reason through a situation—consider all the facts and come up with a plan—but he had nothing, nothing but fear. Back in the mirror, his father’s eyes offered no solution. Should he risk trying to drive? Hide out in the building with the dead bodies? Try to make his way on foot?

An idea broke through his panic.

“Where do the workers park?” he asked himself. “The last entrance was more than ten miles back. How do the people who work here—the clerks and janitors—how do they get to work?”

Robby took the keys from the ignition and stuffed them in his pocket before he eased the door open. The interior lights came on and he hurried to shut the door behind himself. The Volvo dimmed the lights slowly and Robby cursed the speed while he crept over to the fence near the trees. In the shadows of the overhanging branches, he inched his way towards the building. While he moved, he kept watch on the highway, waiting for the next blue flash.

He circled the parking lot, staying next to the tall chain-link fence that stood between the grass and the woods, until he could see the back of the rest stop building. The building had loading docks on the far end and a couple of doors closer to Robby. A sidewalk led away from the doors and through a set of tall hedges. Robby crossed over the lawn—just starting to crunch with forming frost—until he could round the hedge and see what it was hiding. Between the tall bushes, the sidewalk led to a ramp that descended down to a lower parking lot.

At the bottom of the stairs, the sidewalk split off to his left and right. In front of him, a couple of rows of parked cars sat in the moonlight. Robby guessed that he had found the employee parking lot. Around the north side of the lot, the pavement ended near the trees. Robby kept to that side so he could move in the shadows. He hoped for a nearby neighborhood, or perhaps a convenience store.

He hoped for anywhere he might find shelter or a set of car keys hanging on a hook in someone’s kitchen. Until he rounded the back corner of the lot, and could see that the two-lane access road for the employees stretched off into the night, he had high hopes for an easy solution to his problem.

Robby paused. The wind in the trees made the only noises Robby could hear. He grew up on a sparsely populated island—he was accustomed to quiet nights—but this silence felt empty of life.

Robby walked. He kept to the edge of the road, right where the pavement ran out and gravel covered the gap to the grass.

The movement warmed up his core, but his feet and hands remained frozen. Robby counted his steps and decided that he would walk one-thousand paces and then turn around if he didn’t find any houses. At about three-hundred, the road rounded a slow turn and Robby saw a big straight length of road ahead. He kept going. By eight-hundred steps—two curves later—Robby could see where he would eventually turn around, but he kept going. At one-thousand, the view was the same. The two-lane access road was flanked with wide, grassy shoulders, and then were bordered by deep Maine woods. He didn’t know what town he was closest to, but it was clearly not close enough to offer him easy shelter against the cold night.

Robby’s young legs threatened to cramp, so he turned and trudged back towards the rest stop. Even a car with a broken window was better than no shelter at all, he figured.

As he walked, Robby’s thoughts returned to the turkey sandwich he’d had for breakfast. Even when fleeing the house, his mom had tried to make responsible use of the Thanksgiving leftovers. Now that she was gone—sucked up into the air and evaporated, right before his eyes—Robby wondered if he would ever have another turkey sandwich.

“The power hasn’t been out that long,” he whispered to himself as he thought. “I’m sure I could find a grocery store where the meat is still reasonably fresh.”

But that wasn’t the point, and he knew it. His mom was gone, and his dad was gone. Both had disappeared and he couldn’t kid himself—they weren’t coming back. For that matter, all his friends were gone, too. As far as Robby knew, he was the last person left alive on the planet. The days of turkey sandwiches were finished, along with his parents, friends, and warm cozy beds where he could sleep until breakfast without worrying about rotting corpses lined up in the moonlight.

Robby felt his panic rising. It threatened to take over and take away his reason. Like a reflex, an image of his dad popped into Robby’s head. His dad could handle any situation. He would listen carefully to the problem, form an opinion, and immediately return to a carefree, jovial state. That’s what Robby admired most about his dad—his ability to stay positive, regardless of the crisis. Or, Robby corrected himself, that’s what he used to admire most, before his dad had disappeared.

When he heard his shoelace flapping against the pavement, Robby stopped abruptly. He cocked his head for a second. It seemed, just for a moment, like the sound of movement on the other side of the road had continued a tiny bit longer than his own footfalls. Robby knelt to tie his stolen shoe and scanned the tree line. If there was something there, it had hidden itself quite well. When he stood, Robby scuffed his foot on the pavement. He wanted to see if the noise he heard was just an echo off the trees. It took a quick calculation—at eleven-hundred feet-per-second, sound would take less than one-hundred milliseconds to cross the road, bounce of the trees, and come back. The movement he’d heard was way longer than that, and the echo of his scuffing foot proved it. Unless his ears were playing tricks on him, he’d heard something move.

When he resumed walking, Robby worked hard to quiet his stride, ears straining for any other sounds. He didn’t hear anything, but that only served to increase his paranoia. He picked up his pace and kept his head turning back and forth, waiting for another sign that something was following him. He reached the parking lot and breathed a little easier when he passed between the rows of parked cars. They didn’t offer him any safety, but they looked normal and tame compared to the shapeless dark woods that lined the access road. Robby crossed the parking lot in the open, but then moved to the shadows again as he walked back up the ramp towards the building.

Just as he emerged from between the bushes that flanked the path, Robby saw another blue flash streak down the highway and then disappear out of sight. Robby pressed himself back against a bush and stared off in the direction of the highway. The lightning faded away, leaving Robby’s eyes with a swirly-black afterimage burned into his retinas for several seconds.

The wind stopped. Everything Robby could see and hear became perfectly still in the wake of the blue flash. It felt like he’d been dropped into a diorama. The stillness made the building in front of him seem unnatural. It sat, poised to spring, like the jaws of a leg trap. Robby imagined that the whole rest stop had been built as a way to capture unwary travelers, a giant roach motel built to ensnare northbound I-95 traffic.

Star Trek: The Original Series - 147 - Devil’s Bargain by Tony Daniel
Hollywood Nocturnes by James Ellroy
The Carbon Murder by Camille Minichino
Not What She Seems by Victorine E Lieske
Strange Country Day by Charles Curtis
Falling Sky by Lisa Swallow
Listen to My Voice by Susanna Tamaro
The Here and Now by Brashares, Ann
Kodiak Chained by Doranna Durgin
All Too Human: A Political Education by George Stephanopoulos
Our partner