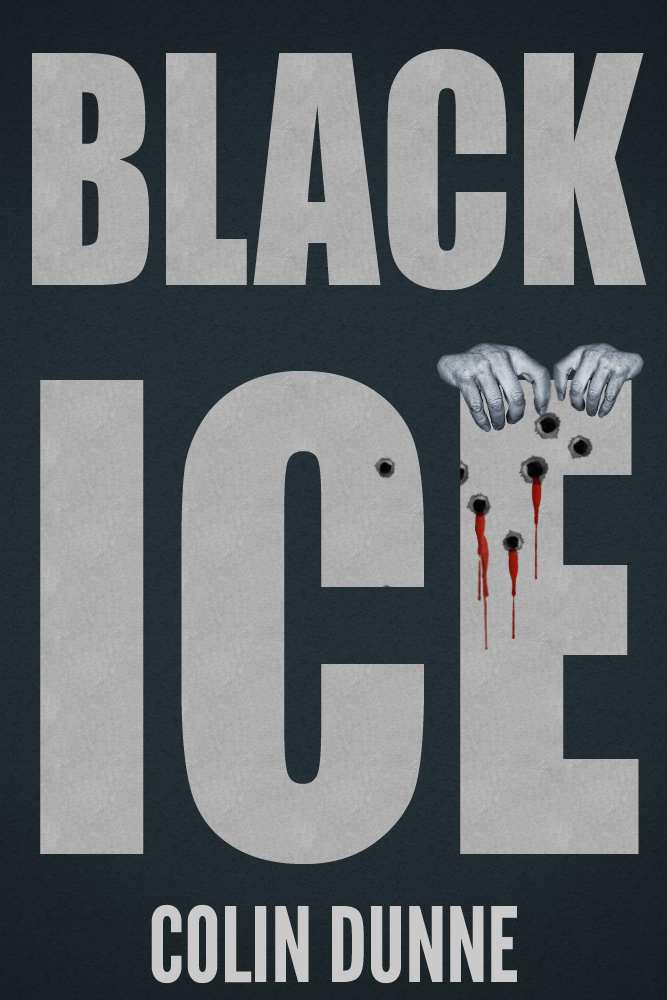 Collin Dunne has asserted his rights under the Copyright, Design and Patents Act, 1988, to be identified as the author of this work.

If  you've   never  come to  in  the  middle  of  the  night  to find yourself  approximately halfway between New York and Moscow, right up on top of the world, standing outside  a block of flats wearing  nothing other  than a ladies' silk dressing-robe and   that  decorated  with  large  scarlet   kisses - allow me  to describe the sensation.

Confused. That's  the word, I  think.  Confused, and cold around the knees.

I shivered, yawned  and  did a few push-ups with my eyelids while  I applied  my brain  to some  basic questions: like was it night  or  day?  That isn't quite  as  easy  as  it sounds. In  the summer, about the only way you can tell is by the life in the city. From   where   I  was  standing, outside   the  flats  high  up on Vesturbrun, the  place  looked  like  early-closing day  on  the Marie Celeste.

That made it night.  Still.

I looked and listened. Nothing. Only, in the distance, a car chugging and spluttering. An early worker. Or, here in Reykjavik, more likely a late reveller.

I called out  her name,  then stood  there  feeling silly. Solrun isn't the sort  of name  you can  go round  shouting, not  unless you've  strayed into  one of those operas  where  all the women look like sixteen-stone milkmaids. In any case, my cry fell into that  damp silence like a stone  down  a well.

Then it struck me.  If this was my debut in international espionage, I wasn't doing  too well. I mean, how would it look on  my c.v.?  'On  his first operation, Craven actually lost  the subject  of  his surveillance while  she  was  in  bed  with  him.'

Roger  Moore  never seemed  to have these problems.

Once more I called out her name. The wind whipped  it away and then frisked me with cold and cheeky fingers. Even with the scarlet kisses,  the silk robe  wasn't much  protection against  a breeze  that  had  trained  in the Arctic.

Dammit. What  the hell was she playing at? Baffled? Oh yes, I was baffled all right.  But I wasn't too worried because  I knew Solrun.  She   was   a   twenty-four  carat  madcap,  that   one. Alongside  her, other  women  were prisoners  of iron  logic. She was governed entirely  by inexplicable whim.

Otherwise - let me say it first - what  would she be doing  in bed with  me?

Anyway, at that point I wasn't too serious about  my career as a spy. For one thing- as I'd said to Batty- those international organisations who  were  known  by  a  deadly   trio  of  initials always sounded like television stations to me. 'There's nothing on the KGB  tonight, shall  we watch  the news on CIA?'

Come to that, no one had mentioned spying. 'Give history a bit of a nudge', was the expression Batty had  used.  From his prissy mouth, it sounded about as strenuous as stamp collecting.

Right now it was either  too early or too late to do anything significant by way of history-nudging. I gave one last shout, one last yawn, one last shiver, and shot back indoors with as much dignity  as  man  can  muster  when  he's dressed  like something from a boudoir catalogue. Which wasn't much.

As I waited for the lift, I recalled what she'd  said about  the two men.  Perhaps they'd kill her, she'd said.  For a moment, I felt uneasy, until  I realised  it was a minor attack  of those just before-dawn doubts. She was always saying  things  like that. That was Solrun, living life downhill without   brakes.  Death threats, either   real  or  imaginary, probably played  the  same part  in her  life as  parking tickets  in mine. So I shrugged   the thought off and hopped  into the lift.

That was my first day there.  I didn't know what it was all about. Then it was just a good laugh  spiced  up with  a bit of mystery.

Later, the spicing sort of outweighed the laughs.

The strongest phrase that  William  Batty did use, that  morning he came sneezing  up to my office four floors above  Farringdon Road,  was 'spot  of trouble'. That wasn't much preparation for what was to come, either.

He mumbled on about keeping the old eyes open and a word in the right ear at the right time, and for quite  a while I didn't know what  the hell he was talking about. I wasn't much wiser when he left, come to think of it.

When I'd  moved  into  that  office two years  earlier, a pal of

mine  had said  that  the sight  of all those  barrows  loaded  with second-hand books in the street  below would  depress anyone attempting to earn a living by arranging words into sentences of interest. It did depress me, but then that was never too difficult. In the film of grease  and  dust  on the window,  the same bloke had  written 'Sam  Craven, Diurnalist and  Wordsmith Extraordinaire'. Funny thing about journalists: because  their  trade obliges them to reduce  the English  language to a level comprehensible  to  a  four-year-old,  they  tend   to  go  round talking  like Sir Roger de Coverley  by way of compensation.

It caught Batty's eye. 'Most amusing,' he said, stooping to read it against the one shaft of sunlight that somehow managed to sneak  through the chimneys.

Then he stood up with  his hand  on his chest, still searching for breath after  the stairs. 'My word, young  man,  you must  be very healthy  to tackle  those every day.'

'You  know what  they say? You can have all the health  in the world  but it won't  buy you money.'

He  sat  down   gingerly   on  the  rackety   bentwood   chair   I reserved for my most favoured  guests. My least favoured guests too, since it was the only one. I had a good look at  him.

Late fifties: grey  nondescript suit  and  tie and  black  shoes, suggesting academic non-strivers rather than  commercial rat racer;  pale, podgy, with hair that  looked like an old tabby  that had  crawled  up there  to die, depositing a small  kitten  on  his upper  lip on the way.

I was just beginning to wonder about  the red rims round  his eyes and  nose  when  he suddenly began  gasping for air,  and tearing a sheet-sized hankie from his pocket he buried  his head in it with a volcanic sneeze.  'Hay fever,'  his muffled voice explained. 'Dreadful.'

Behind him, the wire coat-hangers on the door-hook tinkled a salute to his effort. He sneezed again, this time a planned  and controlled explosion. Afterwards, he gave me a weak smile.

Now it was his turn to have a look. Topless jar of paste with plastic   teaspoon   replacing lost brush.   Chain   of paper-clips dangling from large bulldog clip which secured dished shade over desk lamp.  Small dented tin teapot wearing smart prophylactic red-rubber spout. Scarred, chipped, scratched and stained desk, with filing cabinet to tone. Two empty lager bottles beside  photo of young Sally, clasping kitten.  In the loo next door, an echoing baritone's claim  that  he'd  left his heart somewhere was drowned in a noisy gush of water.

'This is what you get for twenty years of honest endeavour,' I said.

Batty  nodded  uncertainly. If he was impressed by what he'd seen,  he managed to restrain himself from showing  it.

'Still,' he said, brightly, 'I dare say all a professional like you needs is a typewriter and  a bit of paper.'

'And an employer,' I said.  I gave him an encouraging smile in case he'd forgotten why he was here.  On the telephone an hour earlier, he'd said he was from some international features agency which was interested in commissioning me.  I didn't have so many customers that I could afford to let him sneeze himself to death  before I'd  got the job.

'Ah, yes,' he said, giving me an unexpectedly foxy look. 'Can I ask you something a little ... well, a little unusual?'

I opened my hands  to present  an easy target. 'What do you want  to know? Shorthand of seventeen words a minute, I can spell Mediterranean some of the time, and my litotes is the talk of Hammersmith- if you'll  forgive the hyperbole.'

After a pause, I asked: 'The model?' And he nodded, without taking his eyes off my face.

Whatever I'd   been expecting, that wasn't it.  While I ran through the implications, I got  up and  banged  the button  on the electric  kettle on top of the filing cabinet. It began to boil almost immediately. I still hadn't finished my last cup of tea but I needed  time to think.

'Thank you, no,' he said, with a quick glance at the encrusted mug which was the only spare  in my catering division. 'You're quite right, of course.  Am I right in thinking she is was rather a close friend?'

'You  could  say  that,'  I  replied.   For  one  heart-stopping moment, it occurred to me he might be collecting divorce evidence.  Then   I remembered that I was divorced  and  that Solrun  wasn't married, and  anyway  I hadn't seen her for two years. 'Yes, she's a great  lass,'  I added.

When wasn't she? I nearly  asked,  then didn't. I sipped my tea and  waited  for him to explain.

'What it is, Mr Craven, is that she's got mixed up with some rather dangerous types. Undesirables.'

Well, you certainly couldn't call Solrun  an  undesirable. On the other  hand  she was very, very dangerous.

These   thoughts,  together   with  other   warm  and   pleasant memories,   quite   distracted  me  from  Batty's  explanation - something about  a Foreign Office department concerned  with British  interests abroad -  but  I retuned  quickly  when he said they  understood I was a close (ahem  ahem)  friend who could possibly  use  my  influence  to advise  her.  That was when  he started going  on about  words  in ears  and  open  eyes. At that point  I had to intervene.

'I don't really know what the hell you're on about,' I said.

He vanished into  his hankie  for some  more secret  H-bomb testing  and  when he came out his face was as pink as his eyes.

'What we're asking is for you to pop up to Reykjavik as an old friend, see what's going on, and do what you can to steer  her away  from  any  foolishness.  I'm sure it will all become clear once you're there.