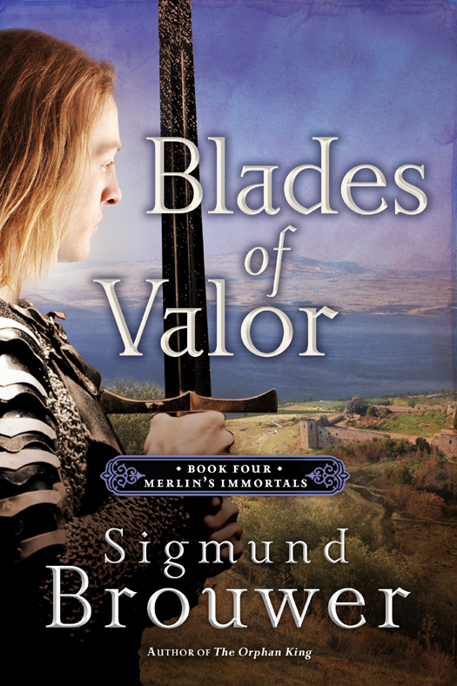 Published in the United States by WaterBrook Multnomah, an imprint of the Crown Publishing Group, a division of Random House LLC, New York, a Penguin Random House Company.

WATERBROOK and its deer colophon are registered trademarks of Random House LLC.

B
eneath the blue of clear sky and gentle breeze that carried the salt smell of the Mediterranean Sea, Isabelle Mewburn strode on the cobblestone with plans of murder in her heart. She was burdened by the ultimate task her father had assigned upon her departure from England, months before. Deciding the best way to end the lives of the two people who prevented her from fulfilling this task gave her a cold satisfaction.

As she walked, her cloak and gown dragging along the spice-dusted streets, she heard the babble of foreign tongues at every market stall. Once, this harbor town had been one of the richest cities in all of Europe and the Mediterranean, when merchants from all over Europe had enjoyed raucous lives as middlemen, trading from ships that arrived from the sea on one side, with Arab traders supplied by camel caravans from the Damascus road on the other.

St. Jean d’Acre had served for nearly two hundred years as the main port to the Holy Land. It had been the last Crusader stronghold in the Holy Land to fall to Mameluke infidels. First Jerusalem, then Nazareth, then each fortress along the Sea of Galilee. One by one, the mighty castles that had guarded the land for generations had fallen.

The massive stone walls of the city and the high turrets of its remaining buildings showed glory and strength from a distance, but Isabelle soon discovered it was merely an illusion. Beyond the market stalls, the town seemed empty and the shadows were deep. So many opportunities to fulfill her orders! The possibilities seemed endless. Should she aim to destroy Thomas and Katherine together? separately? secretly? But oh, how she would love to see the light of recognition in their eyes spark as she ended their interference once and for all! How was she to choose?

As she stepped around a corner, she realized that, instead of thinking of murder, she should have been focused on her surroundings. She was a young woman and knew her dark hair and beautiful face drew attention. During the times of the Crusades, she could have walked anywhere the streets took her without danger, invisible in her finery among all the other women who strutted in their wealth. But no longer.

It caught her unaware, then, when she came upon three older boys punching a younger boy, who cowered with his hands over his head in a vain effort to stem the blows.

At her sudden appearance, they stopped and assessed her. They wore little more than rags, and the grins that broke across their faces were those of wild predators, ready to enjoy savaging their prey.

Annoyed with her own lack of grace and attention, she shooed them away as though they were scrawny rats. “Go away, or I’ll tear you apart. I’m in no mood for this.”

Their grins changed to brief bewilderment. Then the biggest of the three, half his left brow replaced by a jagged scar, shrugged and took a step closer.

“Puppies,” Isabelle said. “How badly do you want to die?”

The young boy spoke from behind them. His skin, lightly freckled, didn’t have the same dark complexion as those who had been beating him, and his hair, although dirty, was nearly as red as the
blood pouring from his nose. “They don’t … understand you. Few on these streets … speak English,” he explained, gasping between words.

“Tell them, then, that I’m not to be bothered. Or I will hurt them badly.”

The boy spoke in rapid bursts. The biggest attacker laughed.

“He says that … when they finish with you … they’ll finish … what they started … with me.”

The three each took another step toward Isabelle.

“Tell them,” Isabelle instructed her interpreter, twisting rings on her fingers, “that this is their final chance to walk away unharmed.”

Instead of speaking, the young boy darted forward and took a protective stance in front of Isabelle.

He put up his fists and waited for their opponents.

Isabelle sighed. She stepped around the broken but cavalier child and closed the distance to the ringleader. He was obviously accustomed to prey that ran, because again, bewilderment crossed his face.

Isabelle’s hand flashed upward as she slapped him across the face. He blinked, then reached up and touched his cheek in disbelief. He pulled away his hand and looked at the blood on his fingers. A huge gash had opened his cheek.

He roared instructions at the other two, who rushed her and tried grabbing her. One was able to put an arm around her shoulders. She grabbed his wrist with her other hand, leaving behind a small puncture mark that filled with blood. She spun free and slapped the third boy across the face, again leaving behind a bloody gash.

Then she remained where she was, watchful of her opponents.

They began to sag to their knees. Seconds later, each flopped forward to the ground.

This came from the red-headed boy, staring in disbelief.

“Someone who is not in a good-natured mood at all,” Isabelle said.

On each hand, Isabelle wore an elaborately designed ring with a tiny secret button that released a small spike. All she’d done was turn each ring inward and release the spike, which was coated with a fast-acting paralyzer, taken from the mash of special roots.

But that wasn’t something she would tell the boy.

Isabelle adjusted the rings so that the spikes retracted, then spun them outward again. She reached inside her cloak and found a small silver coin. She reached out and he flinched. She showed him the coin.

“For your help,” she said. “I’m grateful that you didn’t run away.”

“No,” he said. “I don’t want to be paid for doing something that was meant as honor. It’s not the code of knighthood.”

Despite her bad mood, she laughed. “And what do you know of knighthood?”

The boy drew himself up with pride. “I am the son of an English knight who fought here at the Siege of Acre.”

“That’s fanciful,” Isabelle said. She knew the history. The Crusaders’ last stronghold, St. Jean d’Acre, had fallen to the Mamelukes in May of AD 1291, after a horrible and prolonged siege. Few knights lived to speak of the battle. “He told you this?”

“No m’lady. He died the day I was born. ’Twas my mother who taught me of his bravery and my heritage. How else did I learn to speak our language?”

That gave her pause for thought. How else indeed? Something about his innocence charmed Isabelle. “Your name?” she asked.

“Rowan.” He rubbed his head. “It means ‘red.’ My mother said when I was born I had a full head of it, shiny as copper.”

“Take this,” Isabelle said, offering the silver again. “Not as payment for helping me, but as a payment for translating for me. Not that it did these thugs any good.”

Isabelle kicked the biggest boy, who lay at her feet.

Isabelle kicked the second boy. “They deserve it.”

She was surprised when Rowan stepped between her and the fallen boys.

“I said, it’s not right. Please don’t kick them again.”

“They were just beating you.”

“It doesn’t matter. It’s not right to hit a fallen opponent.”

“And I don’t like being lectured by a street urchin. Go back to your mother.”

Rowan looked her directly in the eyes. “I don’t have a mother. Not anymore. She died in the spring.”

She glanced at the silver in her palm, as if confirming it was still there. This boy was an orphan. How did he feed and clothe himself? Yet he’d refused a silver coin that could be a week’s wages for a full-grown man. And he defended three boys who had just attacked him.

“Rowan,” she said, “how about you stay with me for a while as my guide? Who knows? I might even be able to get you to England someday.”

“I do not need that as a reward,” he said with indignation. “Instead, I pledge to you my allegiance because you are a fair lady and I vow to be your protector.”

Someone this transparently honest and righteous would certainly be of good use in any situation ahead that might require a translator. Someone she could trust fully and someone who could not do her harm. This would be very good. After all, she was in a strange land and wanted two people dead as soon as possible.