Bliss and the Art of Forever (A Hope Springs Novel) 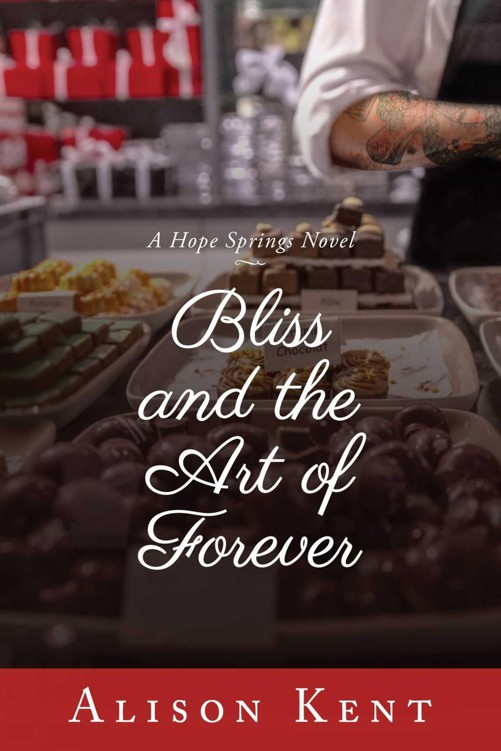 Beneath the Patchwork Moon

The Sweetness of Honey

To chocolate. To coffee.

To the man in my life who puts up with my love of both.

And whom I love because he puts up with me.

Who needs a bookstore of his own.

Thanks, too, to Shannon W. for the tip on tribal tats!

Inked script at his nape. Colored sleeves beneath his rolled cuffs. Elaborate artwork in his oxford’s open collar. Her imagination wandered to his back and his chest, to his shoulders. His biceps. His abs. The tattoos were symbolic, not simply cosmetic, and part of the biker culture, leaving her to wonder how important the club had been to his life before he’d walked away.

Tats intrigued her—the creativity, the significance, the commitment—even when the man wearing the ink was her student’s father, and off-limits. This particular man also wore, not a beard, but an unkempt scruff framing a devilish smile. His hair was long, pulled back in a disheveled sort of knot. It had her thinking of Heathcliff, tortured and haunted and wild on the moors.

Had her, too, wanting to rescue him.

Hands curled over the edge of her desk as she leaned back against it, Brooklyn Harvey looked out at her class of kindergartners. The fifteen five- and six-year-olds sat on the floor in a semicircle, their rapt attention on Callum Drake. Rather than using the full-sized chair she’d offered him, he’d lowered his six-foot-plus frame into one of those from the pint-sized collage table. Watching him fold himself to sit had been as breathtaking as watching him walk through the door.

She’d met Adrianne Drake’s grandparents, Shirley and Vaughn, at orientation before school started, and visited with them again at parents’ night, and at the Halloween costume party, and when they’d eaten lunch with the girl on Grandparents’ Day, and at Christmas. But today, over halfway into the school year, was the first time she’d seen Adrianne’s father for herself.

After months of his daughter’s chatter, and details dropped by the older Drakes about their son, Brooklyn had found herself wanting to know more about him. But the man who’d arrived right on time for story hour left her speechless, because none of the photos she’d seen—the success of his business put him in the local spotlight on a regular basis—had him looking like he’d walked out of a foggy Irish landscape, green eyed and larger than life, with a touch of ginger tinting his dark brown hair.

When she’d read his name on the sign-up sheet for her
Dads Love Books, Too! reading program, she’d been surprised. And a little bit apprehensive. Involving the parents in their children’s learning experience was an important part of her curriculum.

But was exposing her students to a member of a biker gang—okay, an
ex-member
of a biker gang—a smart thing to do? Would other parents object should they get wind of a man with his background, celebrity or not, upstanding citizen or not, interacting with their children in her classroom?

And then she’d thought about Adrianne Drake. The girl was one of the most well-adjusted children Brooklyn had ever taught. She was bright, and gave serious thought to her questions and her answers. She was kind to her classmates, and responsive when Brooklyn asked for help. Yes, the girl’s grandparents were an influential and hands-on part of her life, but she lived full-time with her father. She adored her father. She rarely stopped talking about her father.

In the end, that had been the deciding factor in Brooklyn’s e-mailing Callum the details to confirm the date. She’d needed to meet the man who, as a single parent burdened with the baggage of a sketchy past, was rearing such a precious, and precocious, little girl.

Now that she had, well, she had more questions than answers. At the top of her list: Why was this man unattached? It couldn’t be a lack of women throwing themselves at him, based on his looks alone. Then there was his career. His chocolate shop, Bliss, a locally owned small business, was often spotlighted by the
Hope Springs Courant
. A lot of women had a thing for men whose work drew that sort of acclaim.

More important, however, why hadn’t he found time before now to visit his daughter at school? What about today’s story hour was so different from the other activities she’d arranged to involve her students’ parents?

But mostly, why was she letting herself notice him as anything besides Adrianne Drake’s father when she was very happily single and intent on staying that way? The idea of going through another loss, no matter Artie’s black-humored insistence that should he die in the line of duty, she mourn him no more than two years . . . she wasn’t ready. She didn’t know if she’d ever be.

She supposed it should make her feel better that she wasn’t the only one captivated by the man. The three homeroom mothers had stopped setting up poststory treats—conversation heart–topped minicupcakes and heart-shaped cookies, both from Butters Bakery, and cute little candies with a chocolate shell and a root beer filling, from Callum’s confectionery—to listen to the chocolatier introduce himself to the members of her class.

It was hard for Brooklyn to wrap her head around his transition from biker to candy maker, but she had no trouble picturing him in chef whites, the tats at his nape and the base of his throat suggesting she’d like what she’d find if she freed the buttons of his coat, parted the sides, pushed the garment off his shoulders, outlined the designs first with a fingertip, then her tongue—

“Okay,” Callum said, his deep voice drawing Brooklyn’s gaze and a heated blush. “Are we ready for a story now?”

He looked to Brooklyn for guidance. She picked up a flat marble paperweight carved to look like an owl and nodded for him to begin, because nodding didn’t require her to speak, and the owl gave her something to do with her hands. Good grief. What was wrong with her? Yes, he was pretty. Oh, he was pretty. And intriguing. And so very hot.

But Brooklyn had plans. Big plans. A week after the school year ended, she was going to be on her way to Italy with no idea when she’d return. Ships crossing in the night, she and Callum Drake. Or in this case, crossing in a kindergarten classroom.

He opened the picture book his daughter handed him, facing the pages of
The Bunny Who Loved Chocolate
toward his rapt audience. Adrianne sat in the center of the front row, her corkscrew blond pigtails brushing her shoulders, her crooked front tooth taking nothing away from her grin. She had eyes only for her dad, and Brooklyn stanched the catch tugging at her heart. He was doing such a good job as a father.

“Blue!” The children called out the answer, and Callum turned the page.

“The same color as the sky where his friends the birds . . .”

An awkward sentence, but it worked for the rhyme. Brooklyn looked from Callum to his daughter and watched Adrianne mouth the words. They’d obviously shared this story many times. The girl anticipated then mimicked the faces he made and the rhythm with which he read, and Brooklyn couldn’t deny the smile teasing her own lips. Or her fascination with the movement of his.

Pushing off her desk and leaving the owl behind, Brooklyn circled the room to the snack table still needing to be readied. Callum was through four pages now, and only sixteen remained. She probably knew the story as well as Adrianne did. “Can I help with anything?” she whispered to one of the moms.

“Oh, no, we’re fine.” Bethany Patzka, who’d donated a tray of vegan granola and dried fruit clusters, leaned closer, bringing her fingers to her mouth to hide her words. “Just a little bit distracted, if you know what I mean. The kids are absolutely worshiping that man, and he looks like he could eat them for breakfast.”

“I’d like to give him something to eat for breakfast,” Lindsay Webber, the second volunteer and mother of Adrianne Drake’s best friend, Kelly, put in, eliciting a sharp groan from the third.

Brooklyn looked at Callum. His gaze came up and met hers, and she pressed her hand to her throat to hide the throb of her pulse at the base. Surely he hadn’t heard; he was half a room away.

But the words were out there, as was the sound, and both had her mind going places it didn’t need to. Places she’d avoided for ages because she’d made her peace with being alone.

She’d had twelve years with the most wonderful man she’d ever known. Twelve years traveling the globe, and cooking breakfast for dinner, and watching every Bruce Willis movie ever made multiple times.

Until the roof of a burning building had collapsed, trapping Artie and another member of his firefighting crew and turning her world upside down. The love of her life had been gone for almost two years, and that was that.

Which didn’t explain why was she thinking about Callum Drake’s tats, his green eyes and ginger hair, and how his skin would taste smeared with chocolate.