Lover Eternal: A Novel of the Black Dagger Brotherhood 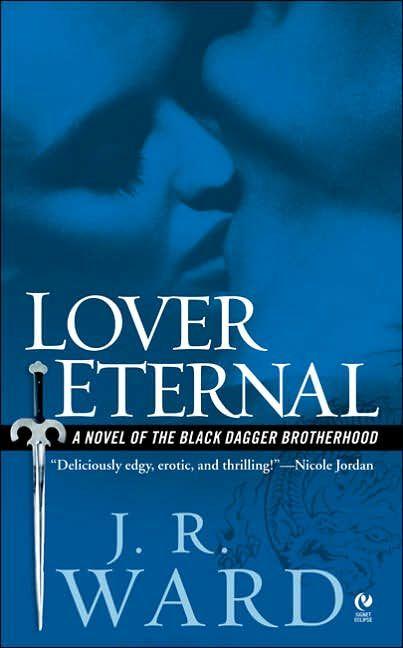 "A fabulous treat for romance readers!"

"It's not easy to find a new twist on the vampire myth, but Ward succeeds beautifully. This dark and compelling world is filled with enticing romance as well as perilous adventure. With myriad possibilities to choose from, the Black Dagger Brotherhood series promises tons of thrills and chills."

"Even if you are so over vamps, think there is no new way to tell a story, or need a break from the same old thing, pick this one up! If you read only one paranormal this year, make it
Dark Lover
." —All About Romance

"This is the first installment in what promises to be a spectacular new series. Ms. Ward has created an edgy, dangerous, and sexy band of brothers that will rock your world…If
Dark Lover
is any indication of what readers have in store, Ms. Ward will have us begging for more. Lovers of the genre will not want to miss this talented new author!" Printed in theUnited States of America

If you purchased this book without a cover, you should be aware that this book is stolen property. It was reported as "unsold and destroyed" to the publisher, and neither the author nor the publisher has received any payment for this "stripped book."

In the beginning, we didn't hit it off, did we?

But then I realized the truth about you and I fell in love.

Thank you for letting me see through your eyes and walk awhile in your boots.

You are just so… beautiful.

With immense gratitude to the readers of the Black Dagger Brotherhood.

Without you, the brothers wouldn't have a home on the page.

Thank you so very much:

With love to my family and friends, and with continued reverence for my

Black Dagger Brotherhood
(pr. n.) Highly trained vampire warriors who protect their species against the Lessening Society. As a result of selective breeding within the race, brothers possess immense physical and mental strength as well as rapid healing capabilities. They are not siblings for the most part, and are inducted into the brotherhood upon nomination by the brothers. Aggressive, self-reliant, and secretive by nature, they exist apart from civilians, having little contact with members of the other classes except when they need to feed. They are the subjects of legend and the objects of reverence within the vampire world. They may be killed only by the most serious of wounds, e.g., a gunshot or stab to the heart, etc.

blood
slave (n.) Male or female vampire who has been subjugated to serve the blood needs of another. The practice of keeping blood slaves has largely been discontinued, though it has not been outlawed.

theChosen
(n.) Female vampires who have been bred to serve the Scribe Virgin. They are considered members of the aristocracy, though they are spiritually rather than temporally focused. They have little or no interaction with males, but can be mated to brothers at the Scribe Virgin's direction to propagate their class. They have the ability to prognosticate. In the past, they were used to meet the blood needs of unmated members of the brotherhood, but that practice has been abandoned by the brothers.

doggen
(n.) Member of the servant class within the vampire world.
Doggen
have old, conservative traditions about service to their superiors, following a formal code of dress and behavior. They are able to go out during the day, but they age relatively quickly. Life expectancy is approximately five hundred years.

the Fade
(pr. n.) Nontemporal realm where the dead reunite with their loved ones and pass eternity.

First Family
(pr. n.) The king and queen of the vampires, and any children they may have.

hellren
(n.) Male vampire who has been mated to a female. Males may take more than one female as mate.

leelan
(adj.) A term of endearment loosely translated as "dearest one."

Lessening Society
(pr. n.) Order of slayers convened by the Omega for the purpose of eradicating the vampire species.

lesser
(n.) De-souled human who as a member of the Lessening Society targets vampires for extermination.
Lessers
must be stabbed through the chest in order to be killed; otherwise they are ageless. They do not eat or drink and are impotent. Over time, their hair, skin, and irises lose pigmentation until they are blond, blushless, and pale-eyed. They smell like baby powder. Inducted into the society by the Omega, they retain a ceramic jar thereafter into which their heart was placed after it was removed.

needing period
(n.) Female vampire's time of fertility, gen-erally lasting for two days and accompanied by intense sexual cravings. Occurs approximately five years after a female's transition and then once a decade thereafter. All males respond to some degree if they are around a female in her need. It can be a dangerous time, with conflicts and fights breaking out between competing males, particularly if the female is not mated.

the Omega
(pr. n.) Malevolent, mystical figure who has targeted the vampires for extinction out of resentment directed toward the Scribe Virgin. Exists in a nontemporal realm and has extensive powers, though not the power of creation.

princeps
(n.) Highest level of the vampire aristocracy, second only to members of the First Family or the Scribe Virgin'sChosen . Must be bom to the title; it may not be conferred.

rythe
(n.) Ritual manner of assuaging honor granted by one who has offended another. If accepted, the offended chooses a weapon and strikes the offender, who presents him- or herself without defenses.

the Scribe Virgin
(pr. n.) Mystical force who is counselor to the king as well as the keeper of vampire archives and the dispenser of privileges. Exists in a nontemporal realm and has extensive powers. Capable of a single act of creation, which she expended to bring the vampires into existence.

shellan
(n.) Female vampire who has been mated to a male. Females generally do not take more than one mate due to the highly territorial nature of bonded males.

the Tomb
(pr. n.) Sacred vault of the Black Dagger Brotherhood. Used as a ceremonial site as well as a storage facility for the jars of
lessers
. Ceremonies performed there include inductions, funerals, and disciplinary actions against brothers. No one may enter except for members of the brotherhood, the Scribe Virgin, or candidates for induction.
transition
(n.) Critical moment in a vampire's life when he or she transforms into an adult. Thereafter,

Darkness Surrendered (Primal Heat Trilogy #3) (Order of the Blade) by Rowe, Stephanie`
The Secret Life of a Teenage Siren by Wendy Toliver
A Round-Heeled Woman by Jane Juska
Blood Of Fire (The Blood Burden Series) by Wenona Hulsey
Lizzy Harrison Loses Control by Pippa Wright
One Day It Will Happen by Vanessa Mars
Dystopia: The Beginning of the End by DJ Cooper
The Zombie Zovels (Book 1): Zombie Suburbia by Lake, D.K
Festive Seduction: The Holiday Engagement Series by Sidney Bristol
Closer to the Heart (The Heart Trilogy Book 3) by Unknown
Our partner