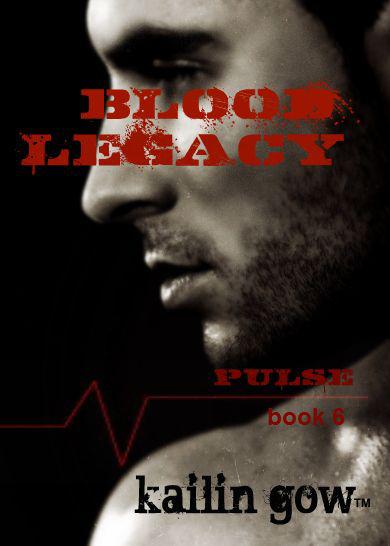 Published by THE EDGE

THE EDGE is an imprint of Sparklesoup Inc.

All Rights Reserved. No part of this book may be reproduced or transmitted in any form or by any means, graphic, electronic, or mechanical, including photocopying, recording, taping or by any information storage or retrieval system, without the permission in writing from the publisher except in case of brief quotations embodied in critical articles and reviews. Do NOT post on websites or share this book without permission from copyright holder, as it is a copyright violation. We take piracy seriously. Fines of copyright violation is the penalty of over $250,000.

All characters and storyline originated and is an invention from Kailin Gow. Any resemblance to people alive or dead is purely coincidence.

This book series is dedicated to all the nameless volunteer blood donors, my doctor, and nurses at Las Colinas Medical Center in Texas who helped me pull through when I had suffered extreme blood loss, blacked out, and nearly hit my head on the floor. Your team gave me bags of blood for transfusion, which helped restore me to a level of safety.

My body craved the blood to keep alive, yet the thought of having to receive the blood from others because my own body couldn't generate it fast enough, made me empathize with vampires like Jaegar and Stuart.

When faced with death by blood loss, you realize how precious that blood in your veins and that beat in your heart are. Thank you blood donors around the world for providing this pulse for me and everyone who may at one point or another require your gift.

T
he night was cold, and the moon was smooth above her, its milky whiteness making her pale skin even lighter. She looked down at her smooth, nearly-translucent hands and shuddered. Was this what she looked like now? She remembered when her flesh had been rosy with life, the first flush of its blood adding pink hues to her olive skin. But that had been another life. A life before her blood had begun its slow, dark hold upon her. Before the hunger started…

She looked down at her body. Still slender, still lithe – those muscles she had once so proudly honed through hours of early-morning runs still taut upon her bones. But she could see the change. She could feel it. In the beating of her blood. In the way her skin grew whiter than the stars above her. She wasn’t human any longer. Not when she walked the night like this, intoxicated by the smell of blood all around her. Humans who had passed through this wood ages ago – hours or even days – the traces of whom still filled her with ravenous desire.

No
, Kalina whispered to herself, gripping the wheel of the car.
No, this isn’t me. I don’t want this.
She hadn’t been turned; there was no reason for her to feel this hunger, this vampire need. And yet she felt it, stronger than any thirst she had ever felt before. The craving to sink her teeth, newly-sharp, into someone else’s skin, the desire to suck the blood from someone else’s neck.

She had made him human. Her blood had spoken, decreed him her true love. And yet what her blood wanted, her heart and soul could not bring themselves to desire. Stuart had wanted a normal life: a normal
human
life. To attend seminary – seven centuries after he had first made up his mind to go – to get married, to have children. And as much as Kalina cared for him, she couldn’t bring herself to submit to all that. At least, not yet. How could she force herself into a normal, human life when she
wasn’t even human
?

She had turned Stuart, that much was clear. Unlike Jaegar, he showed no signs of turning back. But had she turned herself in the process.

There’s got to be a cure
. Kalina stepped on the gas. She had to get away, to get as far from Stuart as possible. She needed time. To think. To process things. To let herself wonder…

If Stuart wasn’t her true love, then who was? Was it Octavius, the thought of whom still made her weak at the knees? Was it Jaegar?

She couldn’t bear to think of him as he was the last time she saw him, with that pain so wide and palpable in his eyes. Seeing her turn his brother instead of him. Seeing her choose Stuart. How could she explain that her decision was born out of compassion, not love? She had wanted to save Stuart – not to spend her life with him! And yet Jaegar had fled into the night, never suspecting, never knowing that she loved him, too.

Stupid
! Kalina pushed down on the brakes and stopped short in front of her old house. She rested her face on the steering wheel, closing her eyes. How had she let things get this out of control? She’d thought that she could handle it – balancing Stuart, Jaegar, and Octavius. Balancing her feelings. Her desires. But instead she was alone – Stuart sitting and mourning her loss at Greystone, Octavius off goodness-knew-where fighting Mal’s troops, and Jaegar…

She’d tried to do the right thing. She’d tried not to hurt anybody. She’d wanted so badly to give Stuart the humanity he craved. And now all she’d managed to do was hurt the men she loved.

For she loved them all – all three of them. She knew that now. She’d never be able to truly choose just one. She loved Stuart’s kindness, Octavius’ strength, Jaegar’s laugh. The moment she settled on one, the features and memories of the other two would come flooding into her brain.

But would this love leave her with none of them?

Kalina sighed as she fumbled with her keys, opening her door. Her eyes quickly adjusted to the darkness, and to her surprise she didn’t even need to flick on the light. Another vampire skill, she supposed. Another proof that she was anything but normal. It had only been a few weeks since she’d last given this place a good look, but it felt like much longer. The place was no longer familiar to her in that same, comfortable way that it had been for eighteen years. She recognized it intellectually, but emotionally something was missing. The sense of
home.
This wasn’t her home any longer. It was just a house – a house she had once lived in. A life she had once belonged to. But it wasn’t hers anymore. Something had changed – not in the house, no, Kalina noted with a frown. That looked just as it always had done.

Kalina caught sight of the family portrait that she and Justin had always kept on the front hall table. It was one of the very few pictures that had ever been taken of the whole family together – a toddler Justin in her father’s arms, a baby Kalina in the arms of her mother. The Calloway family. Kalina picked up the picture and fingered its frayed edges. Could she really have been that tanned, happy, healthy little baby in the photograph? Surrounded by such love, such warmth? Certainly her biological mother Max had never loved her that way – perhaps Max had grown to care for Kalina, with some measure of grudging respect, but Kalina had never seen in Max’s eyes the warmth and joy exuding from the photograph of Joan Calloway.

“Mommy,” she whispered, putting the photograph back on the table.

She trudged upstairs. She wanted to lie down, as she had done when she was a little girl, curl up with her favorite pillow and the blankets over her head. Perhaps then she could shut out the agony of the voices in her head – memories of Stuart, of Jaegar, of Octavius, even of Aaron…the voices that were almost as bad as the hunger. She’d put on her favorite records, the ones she used to listen to when she was little.

She’d be that happy, healthy little girl in the photograph, even if it was only for a second.

Yet as she opened the door to her bedroom, Kalina found that even her old bed no longer seemed safe to her. She couldn’t look at it without thinking of the times she had kissed Stuart there, of the night Jaegar had spent there, of the time Octavius had come to her window in the middle of the night. She had feared him then – then, he had been the enemy – but even in the middle of her fear and contempt she had felt that visceral reaction to him, that stirring of desire. How could she look at her old room, trying to restore memories of a childhood before vampires? No, it was no use. There was no
before
any longer – she’d never be able to go back to that life.

She touched her bathrobe and remembered Octavius’ soft caress. She remembered how her flesh had tingled beneath his firm, rough touch. She remembered the shimmer of the necklace he’d given her, how the cool diamonds felt against her flesh. She remembered how she had shuddered with desire, with longing for him. A desire which came over her again like a wave of sickness, sending her reeling. Where was Octavius now? Fighting vampires, most likely – off saving the world as he was always doing. Getting as far away from her as he could manage to go. Probably with Max, her mother – searching for the Carriers that Mal had hidden somewhere in Europe, hoping to find and save them before it was too late.

Kalina sighed. No matter how much she loved Octavius, he would never really be available to her. He had sworn to spend eternity fighting every last rogue vampire, refusing to turn human until every vampire he had turned became human before him. He would never rest, never stop, never let himself break that sacred vow.