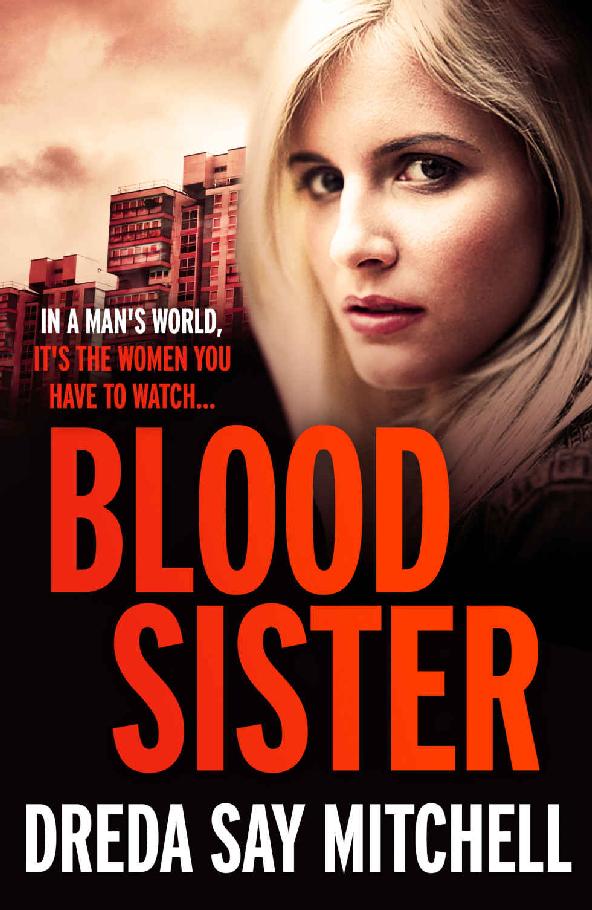 Dreda Say Mitchell, who grew up on a housing estate in East London, is an award-winning novelist, broadcaster, journalist and freelance education consultant. For more information and news, visit Dreda’s website:

First published in Great Britain in 2016

The right of Dreda Say Mitchell to be identified as the

If you enjoyed BLOOD SISTER, look out for the gripping new novel in the FLESH AND BLOOD trilogy

Jen picked up a fearsome-looking bread knife and turned to face her sister, who stood behind her. She shook with fury. ‘This is your fault,’ she spat. ‘It’s all your fault. It was your bloody idea in the first place and now . . . now . . .’ Her voice broke with emotion, ‘And now they’ve taken my kids. You’re a bum and a crim, Tiffany; you always have been, and I must’ve been off my nut to think of listening to you. Now get out of my fucking way.’

She slipped the bread knife into her belt and put a smaller one in her handbag.

Tiffany moved closer to her. ‘No one’s been taken. It’s a—’

Jen pulled the knife back out of her belt so quickly her younger sister didn’t see it until it was waving like a sword in her face. ‘So where are they? Where are my girls? Answer me that.’

‘On what? Two tin cans with a bit of string?’ It was true, their mum didn’t own a mobile. In fact their mum thought a landline was a bit racy.

Tiffany was terrified. She’d never seen Jen like this before. ‘She’s probably taken them up Vicky Park or something, or down The Roman, you know. Please Jen, put that knife—’

Slap. Tiffany reeled from the impact of her sister’s open palm against her cheek. Pain and shock stung her face.

‘Victoria Park or Roman Road Market with all that’s going on? You stupid, silly bitch.’

A raging Jen left the kitchen and headed to the toilet. Moments later, Tiffany heard the chain being pulled and Jen emerged with a glint in her eye, heading for the front door.

‘Oi, where are you going?’ Tiffany followed her sister, her palm rubbing her reddening cheek.

‘To get my children. I know where they are.’

Tiffany’s stomach churned as she realised what Jen was planning on doing. ‘You can’t go up there, if that’s what you’re thinking. Those people are killers; you’ll come out in a box. The girls aren’t gone. Look, if you’re worried, talk to the cops.’

‘Talk to the Bill?’ Her sister didn’t stop her manic pace as she headed downstairs. ‘Why? What are they going to do? Those people you’ve just called killers have probably got the police on their payroll.’

The two women emerged from the damp, dark, piss-stained stairwell into the cool daylight. Jen pulled her car keys from her bag and got into her motor with grim determination. Unable to think of what else to do, Tiffany quickly slipped into the front seat beside her. ‘Please, think about what you’re doing.’

Jen turned on the ignition and the car lurched backwards before shunting forwards again, heading off towards the Mile End Road. When they reached the junction, she didn’t hesitate but put her hand on the horn and pulled out in front of the oncoming traffic. Cars braked and swerved to avoid her before sounding their own horns in response to her honking. Jen ignored them, attempting to nose in front of any vehicle in her way, flashing her lights and shouting abuse as required.

Tiffany realised that her sister meant it. She laid her head against the rest. She had an hour, maybe more, maybe less, to come up with a plan. Otherwise . . . She looked at her sister’s grim face and the tight icy grip she had on the wheel.

There was no doubt about it. Someone was going to get killed.

‘She’s going off the rails and breaking my mum’s heart.’

Tiffany Miller hadn’t picked up much at school, not least because she was never there, but there was one lesson she had learned: never show that you’re afraid. No matter how many people you faced, or how they were threatening to take you down, you never, ever showed fear. If you did, you were royally fucked. So when Tiffany headed into the Bad Moon boozer in Shadwell, East London, she moved slowly and kept her face straight, chewing on two sticks of Juicy Fruit and taking deep breaths to keep her heartbeat down. Although she had a reputation on her estate as a hard girl, she was scared.

One of her favourite tracks, ‘What’s Up?’ by the 4 Non Blondes, was blaring away inside, but Tiffany didn’t like this pub. It was a rat hole that looked like it hadn’t seen a mop and some Flash in years, packed with the type of low life who’d be patting your back as your best mate one day and selling you out on some scuzzy street corner the next. She knew the bloke she was looking for by sight, but didn’t know his name. She’d never spoken to him; she wasn’t allowed to.

She found him sitting on his own at a table in a dark corner, with two heavies sat nearby who were obviously there to make sure nothing stupid went on. The guy totally looked the part. Middle-aged, he wore the kind of flash clobber geezers in his line of work always wear, and was bling-bling with gold cufflinks, a fat belcher bracelet and a tie chain. A Scotch on the rocks topped off his ‘don’t screw with me’ image. His face was heavy and marked, like a boxer’s.

The man and his heavies took their time carefully looking her up and down, then finally he gave her the nod to sit her arse down.

He said nothing for a while but that didn’t bother Tiffany. She knew this silence was his way of letting her know who was running things, so she kept schtum.

Finally, he took a slug of his Scotch and said, ‘Do you want a drink, Tiffany?’

She popped the chewing gum out of her mouth and stuck it on the top of the table. ‘Yeah. I’ll have a vodka and coke.’

The man grinned at her but there was no warmth in his eyes. ‘Vodka? You old enough to be sampling the hard stuff, girl?’

The guy’s smile vanished as scorn twisted his features. ‘You’re a lying bitch. You’ve just turned sixteen.’ He looked like he wanted to gob at her feet. ‘That’s not a very good start is it? You trying to piss straight in my eye? You’d better believe I know all about you little girl – everything there is to know and then some.’

Now you wouldn’t be interested in me if I wasn’t up for stretching the truth every now and again.
But Tiffany didn’t say that; she kept it zipped. She almost grinned when he told one of his thugs to get her a V&C anyway.

He left another long silence before raising his glass. ‘So, a mate of a mate says you’re looking for work. Is that right?’

‘Did he tell you what’s involved?’

The man sighed and stalled for a while. ‘Well, I dunno whether you’re right for it. The way I hear it you’re a bit of a nutter.’ He paused for a long time before adding, ‘I dunno, I just don’t know . . .’

He was trying to rattle her cage, trying to get her to beg for a chance, to convince him that she fit his job description to a T. But because she knew that, she merely said, ‘Well, that’s up to you, isn’t it mister . . . ?’

He smirked slightly at this attempt to get him to tell her his name, but he didn’t give it. He nodded as if she’d passed the test. ‘You got that right, darling. I’ll tell you what, I’ll give you a try out.’ He said it as if he was doing her the bloody favour of the century. ‘Go up to that Pied Piper boozer on Saturday evening and pick up a little something for me. You keep it tucked away nice and safe and, if it works out, I’ll put some more business your way. You know where this pub is and where to put the gear?’ She quickly nodded. ‘You understand how messages get passed back and forth between us? You’ve got your cover story straight if you’re picked up the law?’

Since He Really Feels (He Feels) by Lisa Suzanne
Quit Your Witchin' by Dakota Cassidy
Flavors by Emily Sue Harvey
Split Images (1981) by Leonard, Elmore
The Hypnotist by Lars Kepler
Life in the Lucky Zone (The Zone #2) by Patricia B. Tighe
Knight of Passion by Margaret Mallory
El hombre sonriente by Autor
Gender Swapped By Aliens! by Johnson, Ivana
Delayed & Denied by J. J. Salkeld
Our partner