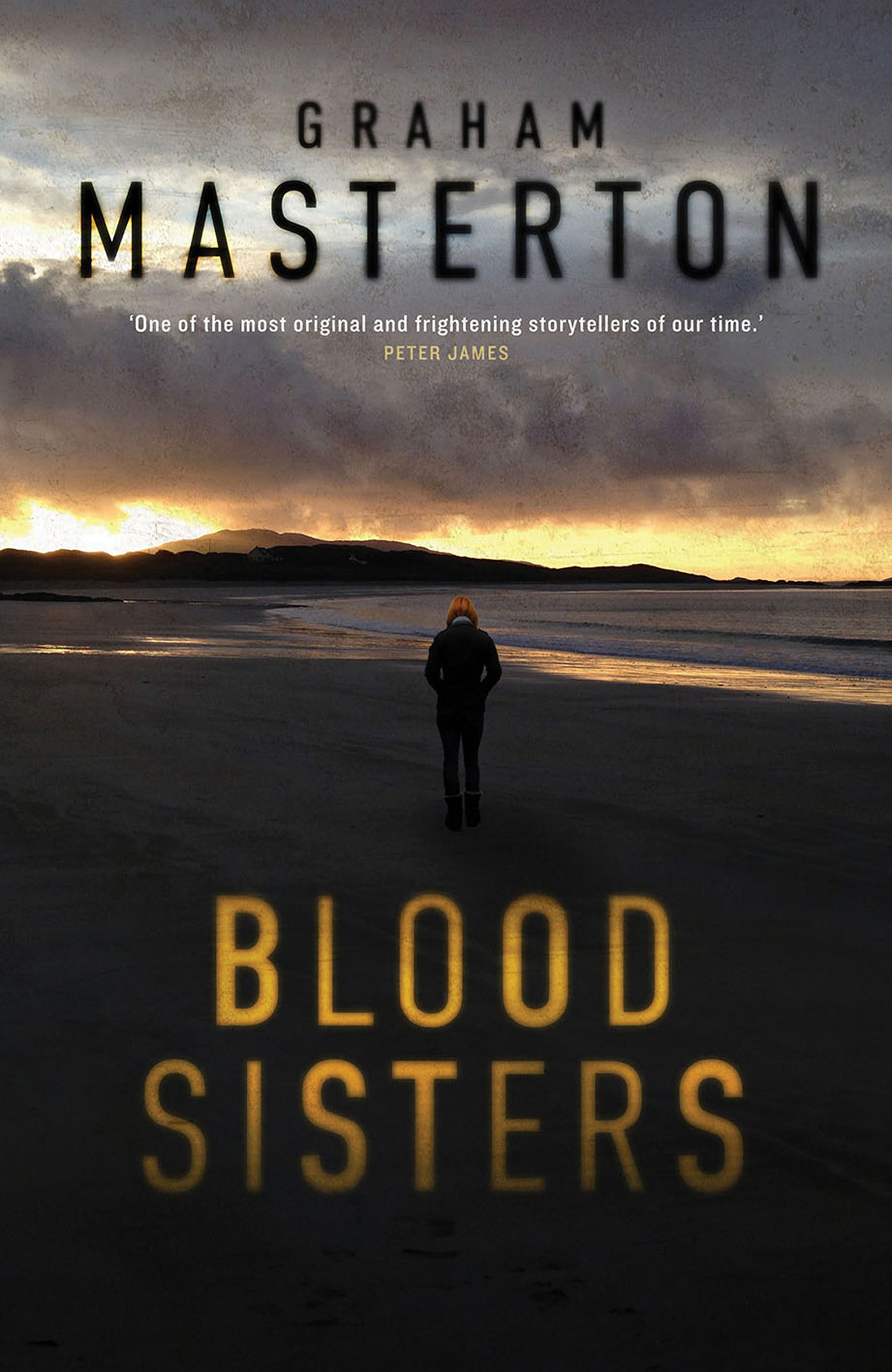 About the Katie Maguire series

For my mother, Mary, without whom
this child would not have been born

‘Did you hear that?’ said Cliodhna.

‘What?’ said Brian. He was turning around and around in circles, trying to see where their Irish wolfhound Christy had gone. They were high on the cliffs near Nohaval Cove. A strong blustery breeze was blowing and granite-grey clouds were tumbling in towards them from the south-west, trailing sheets of rain beneath them.

‘I’m sure I can hear someone screaming,’ said Cliodhna. She pushed back the hood of her red waterproof jacket so that her blonde hair flew up. ‘It sounds like it’s coming from down there, on the beach.’

Brian stopped circling and listened. ‘Nah,’ he said, after a while. ‘I don’t hear nothing.’

‘I could have sworn it was someone screaming.’

‘
Christy
!’ Brian shouted. ‘Where the feck are you, you stupid gobdaw!’

‘You shouldn’t talk to him like that, Brian,’ Cliodhna protested.

‘Why? He’s not going to start talking like that himself, is he?’

‘No, but it’s disrespectful. He’s one of God’s creations, just like us.’

Brian was just about to shout ‘
Christy
!’ again when the wind dropped for a moment and he heard a hoarse, high-pitched shriek from somewhere below them. It reminded him of the appalling cry that a fellow bus driver had made when he had been crushed against the wall of Capwell Bus Depot by a reversing 214. It was a cry of agony and spiritual hopelessness, the cry of somebody who knows they are so severely injured that they are inevitably going to die.

‘Mother of God,’ he said. He ventured to the edge of the cliff, as near to the edge as he dared, with the long grass lashing against his legs. There was a small beach below, but the cliff overhung it so much that it was out of sight. All he could see were the jagged black rocks and the sea foaming between them as the tide came in. The sea itself was a dark, poisonous green.

‘That’s never Christy, is it?’ said Cliodhna. ‘Don’t tell me he fell off the cliff.’

Brian came away from the edge, shaking his head. ‘No. No, I wouldn’t say so. It doesn’t sound like Christy at all. More like a man, I’d say. I’d better go down and take a look.’

‘Maybe we should call for an ambulance. I mean it sounds like he’s hurt, doesn’t it?’

‘Well, just let me take a sconce first. I doubt you’ll be getting a signal out here, anyway.’

Brian made his way back until he reached a narrow gully between two massive serrated rocks. It had been a few years since he had climbed down there himself, but it looked as if people were still using the same steep path to reach the beach. There was even an empty Sanor bottle wedged in a cleft in one of the rocks.

As he started to slither downwards, clinging on to gorse bushes and clumps of grass to stop himself from losing his footing, he heard the scream again – harsh and throaty and filled with despair. He turned and looked back at Cliodhna. She had her hand pressed over her mouth, as if she wanted to call him back but knew that he had to go on.

The clouds had rolled over now and blotted out the sun, and the first few spots of rain began to fall. Brian edged his way around an overhanging rock, but then the path dropped so steeply that he was forced to face the cliff and climb down backwards, as if he were going down a ladder.

When the path levelled out more, he was able to turn around, and for the first time he could see the beach. It was a V-shaped cove, no more than sixty or seventy metres across. Its sharply pointed rocks looked as if they had been deliberately embedded in the sand to repel invaders.

Now, however, only the tips of the rocks were visible, because the whole beach was heaped with the bodies of dead horses. Brian couldn’t even count how many. Most of them were brown and bloated, though others had rotted until they were no more than sacks of hairy skin with bones protruding from them. He could see hooves and manes and tangled tails. There was surprisingly little smell, but then it was winter and the cold sea must have washed over them with every tide.

He didn’t climb down any further, but took his iPhone out of the pocket of his windcheater and took six or seven pictures.

‘Brian!’ called Cliodhna. ‘Brian, are you all right? Christy’s not down there, is he?’

Brian had just started to climb back up to the top of the cliff when there was yet another scream, so loud and so close that he jerked back in shock, his boots scrabbling on the rock as he tried to stop himself from sliding all the way down to the beach.

He turned around again and saw that one of the horses had lifted its head, and was staring at him with one bloodshot eye. It let out a low squeal like deflating bagpipes, and then its head dropped back down again.
Jesus
, thought Brian.
The poor creature’s still alive. What in the name of all that’s holy am I going to do now?

He struggled his way back up. By the time he reached the top of the cliff it was raining hard. Cliodhna was standing with her hood up and her shoulders hunched.

‘What’s wrong?’ she said, when she saw the look on Brian’s face. ‘What’s down there?’

‘Horses,’ he told her. He took out his iPhone again to see if there was a signal, but he knew it was hopeless. They would have to drive to the nearest house and phone the emergency services from there.

‘Horses?’ said Cliodhna. ‘What do you mean, horses?’

‘Horses. A whole hape of horses. All of them dead, of course, except the one that’s screaming like that.’

‘What are you going to do?’

‘Call for a vet, of course. They’ll have to put it down, won’t they? I can’t give a fecking horse the kiss of life.’

He looked around, one hand raised to shield his eyes from the rain. ‘Where’s that Christy? I could take a stick to that fecking dog sometimes!’

‘I’ll stay here if you want to go and make a phone call,’ said Cliodhna, and as if to emphasize the urgency of their situation the horse screamed yet again. Perhaps it was the echo from the cliffs, but it sounded the same as when Brian had first heard it, like a man screaming.

‘Okay,’ he said. ‘But stay here, all right, and don’t go too close to the edge there. You won’t be able to see anything and I don’t want you ending up with all of them horses.’

He started walking towards the corner of the brown ploughed fields where he had left his Volvo estate. As he came closer to it, he saw that Christy was sitting next to it, grey and bedraggled and soaking wet, with his tongue hanging out. When he saw Brian, he stood up and shook himself, but stayed where he was, as if he all he wanted to do was get into the car and go home.

Brian stopped and stuck two fingers in his mouth to give Cliodhna a piercing whistle, and beckoned her to come and join him.

He turned back to Christy, who made a strange, creaking noise in the back of his throat. Brian thought,
You don’t like this place, do you, boy? You know that something fierce terrible has happened here. Seems like you’re not at all the gobdaw I thought you were.

When Katie came out of the small toilet at the side of her office she found Detective Inspector O’Rourke standing beside her desk, holding a blue manila folder.

‘Not a bother, ma’am,’ said Detective Inspector O’Rourke. Then, ‘Are you all right, ma’am? You’re looking a little shook, if you don’t mind my saying so.’

Katie did her best to tidy her hair with her fingers and tug her jacket straight. ‘I’m grand altogether, Francis, thanks. We went for a curry last night and I think I must have eaten a bad prawn.’

‘Look, I won’t tell you about the last time
I
had a curry,’ smiled Detective Inspector O’Rourke. ‘My friends and family didn’t have sight of me for a day or three, that’s all I can say.’

Katie sat down and said, ‘What do you have there?’

‘These? Oh, these are the figures you asked for on immigrant convictions. Sorry they took so long. But we’ve just had a call in from the Mount Hill Nursing Home in Montenotte. One of their residents has been found deceased and the doctor who examined her says there could be suspicious circumstances.’

Katie felt her stomach tighten again. She closed her eyes and pressed her hand over her mouth and wondered if she needed to go back to the toilet, but after a few moments the nausea subsided, although she felt both chilly and sweaty.

‘You’re
sure
you’re okay, ma’am?’ said Detective Inspector O’Rourke, cocking his head sympathetically to one side.

‘Female, aged eighty-three. Found in her bed this morning by nursing staff. They assumed at first it was natural causes. Well, it’s a retirement home, like, so of course their residents are deceasing on a pretty regular basis.’

‘So what led the doctor to think her death might be suspicious?’

‘Well, he was called to certify that she had passed away. But when he gave her a brief examination he discovered that a foreign object had been inserted into her.’

Detective Inspector O’Rourke ran his finger around his shirt collar, as if he were finding this difficult to say.

‘It was a figurine, like,’ said Detective Inspector O’Rourke. ‘The Blessed Virgin, as a matter of fact. The doctor extricated it, out of respect, but apart from that he hasn’t touched the victim in any way at all.’

‘She had a figurine of the Virgin Mary inside her?’

Deceived by Camilla Isles
The Dancer and the Raja by Javier Moro
Memoirs of a Physician by Dumas, Alexandre
The Bracken Anthology by Matthew Bracken
Broken Soldier (Book One) by Bruce George
Peaches and Scream (Georgia Peach Mystery, A) by Susan Furlong
The Scar Boys by Len Vlahos
Groom Wanted by Debra Ullrick
Mystic Embrace by Charlotte Blackwell
When the Heavens Fall by Marc Turner
Our partner