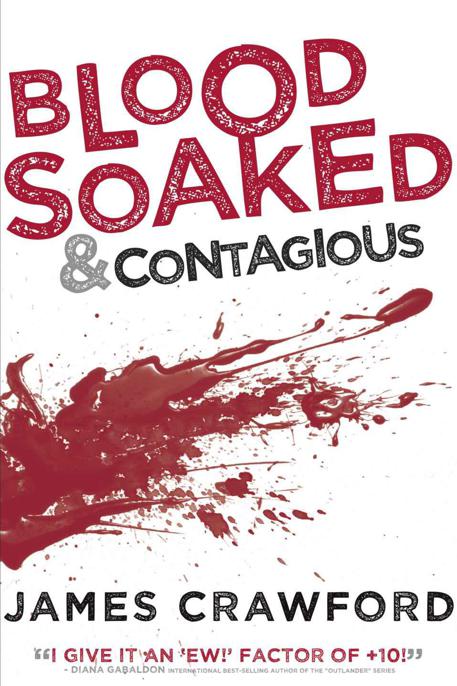 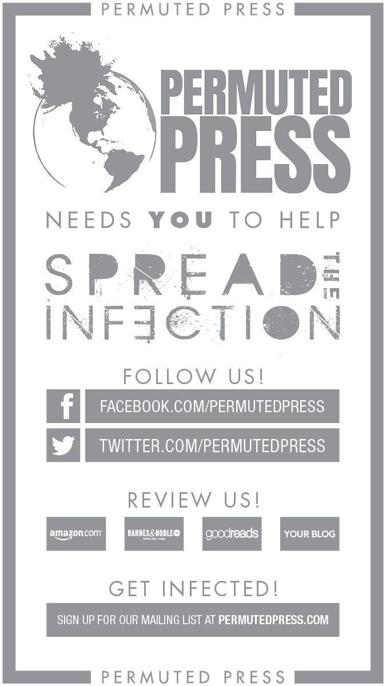 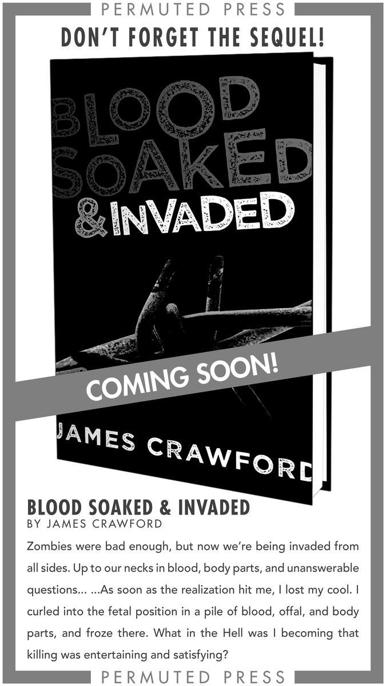 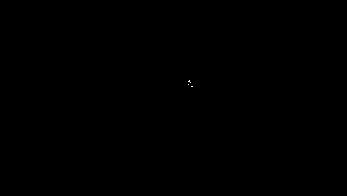 No part of this book may be reproduced, stored in a retrieval system, or transmitted by any means without the written permission of the author and publisher. 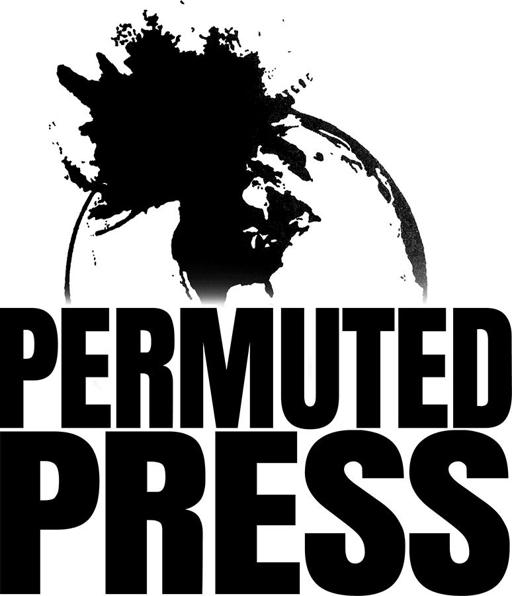 Brain spattered on asphalt doesn’t look very much like anything at all, especially if the asphalt is new. Older asphalt, gray and cracked from years in the sun, shows more of the fatty gelatinous smear but leeches away much of the color.

Standing there in the late morning sun outside the evacuated shell of what used to be one of the best bakeries in town, I couldn’t help but feel a little sad. The headless body on the ground didn’t feel anything at all. I strongly suspect that the head, after I’d spread it over fifteen feet of asphalt, didn’t feel anything either. I suppose that’s a good thing.

Really, if the zombie still felt anything after fighting with me, it would mean that I had not done my job very well. It would also mean the zombie had won.

A zombie winning the fight means you die.

In my case, thankfully, dying would get me out of his way. I’m an annoyance, rather than a possible food source, and that might mean that my transition from this world to the next would be somewhat uneventful. Depending on the personality of the victor, it could as easily mean that my final moments would be even more hideous than being eaten alive. An undead sadist is still a sadist.

The world of “Kill or Be Killed” has only one prize and only one type of fame. You’re the one still alive. Pat yourself on the back!

I’ve been doing this gig, Freelance Zombie Extermination, for just over a year and a half. My claim to fame is simple: “Hey! I’m still alive!” Better, I’m sure, than the other options.

The post-fatal menace that I had finished off outside the old bakery had been harassing a small community of squatters who had appropriated an office building two blocks away. One of my previous satisfied customers had told them about me and they had tracked me down, in the hopes that I’d be able to help them out before anyone else was brutalized.

My profession is not one that pays well, especially since the economy is mostly shot to Hell. All the same, this pleasant group of people offered me a good barbequed chicken lunch if I could make their unctuous bother disappear. Believe me, I don’t usually work for so little, but they were quite kind and polite. I really didn’t want to see them killed off one by one, so we made an appointment for me to drop by on the most likely day their local Trouble would be back and obnoxious. Apparently, he liked to stick to a schedule.

There is still a government, albeit at a reduced level; the nation’s Capital needs to function. The city of Arlington, Virginia, depending on where you’re standing, is within five miles of Washington, DC. Many of the people who live out here in the suburbs continue to commute into DC or work at companies that were nationalized in order to keep everything afloat. We have power more often than not, and even phone service. There are actual stores and restaurants that are struggling to provide services, unlike other parts of the country that look like Mad Max gone to Hell.

All and all, it was a pretty enjoyable walk, even if there were a lot of abandoned homes and businesses along the way. Most of the inhabitants had fallen victim to the epidemic in one way or another. My clients were squatters, but they had a certain established feel to them because they’d been in that office building for a goodly amount of time. They sounded like an interesting group of people and I had hoped to talk to them for a little bit after my hunt and reward luncheon, but that wasn’t how it worked out.

At some point before my appointed time to come around, their friendly neighborhood zombie killed every single one of them. As near as I can tell, he got wind of my impending arrival, and decided to show off his creativity. The cold-blooded bastard did a brutal, methodical, and sadistic job of slaughtering innocent people.

It wasn’t difficult to tell something was wrong when I arrived that day. He’d left me a trail of bloody parts to follow.

The job had changed from a paid gig into revenge—nice, uninfected people should not be killed, willy-nilly—it offends me on a primal level.

He was strong enough, smart enough, and far cleverer than he needed to be. In other words, he was not easy to kill, and he made the best of it by explaining to me everything he’d done in Technicolor detail. When I finally got the drop on him, I did not feel a single pang of remorse or twinge in my conscience as I decapitated him. I will admit that I went a bit overboard when I smashed his skull open.

A few hours after being a complete scavenger, rooting over the things the poor squatters no longer needed, I knew I needed a break. Between the old bakery and my neighborhood, alongside empty storefronts and a burnt-out McDonalds, was an actual bar. Not just any bar, but a real, functioning drinking establishment that was still serving customers. A beer at that bar became the target of my desires, so I went forth.

It was barely a short walk, all things considered, and before you can say, “asshole,” I was stepping inside Marvin’s dystopian bar and grill. The owner and his wife greeted me with their characteristic warmth, which is to say their grunting was somewhat less bitter than what one would normally receive. There was a beer on the bar in front of my customary stool, so I knew the grunting was just for theatrical ambience.

No one has a beer waiting for you if they don’t actually
like
you.

I was midway into my third beer when I noticed a new face at the bar. Anyone you’d never seen before, especially if they didn’t look like one of the undead, was cause for pause. Being a gregarious soul, if a bit crusty around my rim, I decided to engage him on my favorite topic.

“It’s like the whole Han Solo and Greedo thing. People are still slapping around whether it was the virus or zombies that showed up in the world first. They’ll be debating it from now until... I guess, until human beings die out all the way, or we don’t.” I locked eyes with him and attempted to draw him into the conversation by force of will and two and a half beers.

Scar Night by Alan Campbell
The Pyramid Waltz by Barbara Ann Wright
Molly by Melissa Wright
The Heart of a Hero by Barbara Wallace
The Christmas Treasure by Kane, Mallory
hand of hate 01 - destiny blues by joss, sharon
The Paper Magician by Charlie N. Holmberg
The River's Gift by Mercedes Lackey
Raw by Belle Aurora
Fletcher Pratt by Alien Planet
Our partner