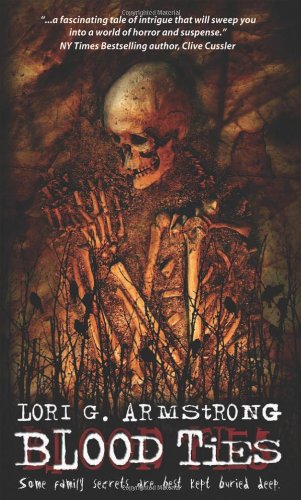 is a registered tradmark of Medallion Press, Inc.

anks to everyone at Medallion Press for believing in this book.

e authors who generously granted me their time, enthusiasm and expertise.

suspicions to a minimum at my barrage of questions. Any technical/factual/procedural errors are mine alone.

To Brian Schnell, of Professional Investigative Resources, for sharing the details on making a living as a “real” PI in western South Dakota. Again, any procedural embellish-ments are purely fi ctional.

ing me on a daily basis what’s really important in my life.

And for not complaining about popcorn for dinner (again) when I’m writing. You rock! Now, go clean your rooms.

Mom and Dad, for being proud of me, no matter what crazy stuff I attempt. Brett: You are the best brother and friend on the planet. PS– I got here fi rst, Bud.

My critique partners and members of my local writing group for their support.

Lastly, and most importantly, thanks to my husband, Erin, for not having me committed when a bumper sticker changed the course of my life. Love ya, babe.

AUTHOR’S NOTE: For those unfamiliar with South Dakota, I’ve taken a few liberties with the Black Hills. Although Bear Butte is a real landmark, Bear Butte County is entirely fi ctional.

“. . . a fascinating tale of intrigue that will sweep you into a world
of horror and suspense.”

Author of the
TORY BAUER MYSTERIES

“Hard as nails, a barroom brawler – and a chick! Lori Armstrongʼs creation is born of the Black Hills. Tough, sensitive
and smart, Julie Collins is a welcome addition to the private
eye genre. In
BLOOD TIES
she breaks all the rules.”

Author of
SEEDS OF DOUBT

“Lori Armstrong writes a compelling story that will hold your
interest from the fi rst page. I was glued to my chair from the
prologue and couldnʼt stop reading until I fi nished it.
BLOOD

TIES
is a roller coaster ride of danger and excitement that
will have your heart pumping and your emotions twisting like
a wet dish rag. I loved this book, and if you like kick-butt heroines and a fast paced mystery, you will too.”

Death has nipped at my heels like a disobedient dog since I was fourteen.

A drunk driver killed my mother the autumn of that year. She was hit head on. Th

e extent of her injuries, in-

I felt cheated. I believed then, if I’d touched her hand or stroked her cheek one last time, acceptance of her death might have off ered me comfort or closure. It didn’t ease my pain that she didn’t suff er. It didn’t ease my sense of injustice that the drunk also died upon impact. And it didn’t ease my father’s rage that the man responsible was Lakota.

After my mother’s death, my father’s hatred of Indians deepened, spreading wide as the Missouri River which divides our state. He’d never hidden his prejudice, but in 2

the aftermath, the racial slurs fl ew from his mean mouth with regularity.
Prairie niggers
and
gut eaters
were fl ung out heedlessly. In those public moments I cringed against his harsh words. In private I fumed against him. I found it puzzling that a man with such a deep-seated loathing for an entire race had sired a son with the same blood.

Apparently my father believed he was absolved of his part in the creation of that life when he signed away paternal rights. Th

e child’s mother believed the boy would never know the truth about his white father.

ey were both wrong.

When my father leveled a look of pure disgust upon the Indian darkening his door, I was horrifi ed, and demanded an explanation for things I didn’t have the ability to understand. His stony silence mocked me. I expected him to yell back. I expected to be grounded for showing disrespect. But the last thing I expected was the hard, stinging slap he delivered across my face.

We never spoke of that day. By some miracle, probably of my mother’s making, I forged a relationship with my brother.

Good old Dad was conspicuously absent whenever Ben came around. I’d gone beyond caring. I loved Ben without question. Without boundaries. And without clue to the consequences. With him I found the bond I’d been 3

lacking. A bond I counted on years later when the tenuous one with my father fi nally snapped.

Blood ties are strong. But the strands can easily be broken, whether tended with love or ripped apart by hatred.

My father chose his means, fate chose mine.

Fate and death seem to be intertwined in my life.

After recent events, I realize nothing about death ever of-fers closure, regardless if it is accidental or premeditated.

I still feel cheated. But I’m older now. Wiser. More determined that justice will be served, even if that justice is a brand of my own making. I won’t blindly give in to acceptance until I know the truth. Even then, I doubt it will bring me peace.

e dog is quiet once again, sated somehow. But I know it won’t last. It never does.

I’d shamelessly splayed myself over the fi ling cabinet, but the warm masculine hands caressing my vertebrae froze.

“Knock it off , Julie. Sheriff hears you moaning like that, he’ll think we’re doing it on your desk.”

“Al.” I sighed lazily. “If I thought you could fi nd my G-spot as quickly as you zeroed in on that knotted muscle, we
would
be doing it on my desk.”

“Smart ass. Don’t know why we put up with you.”

I twisted, heard the satisfying crack and pop of my spinal column realigning itself. No more sex on the kitchen table for me.

“You put up with me because I fi le, but I’m not dedi-cated enough to devise my own system.”

My blond, waist-length hair curtained my face as I 5

slipped my heels back on.

ciency, I look a damn sight

better manning the phones than Deputy John. Admit it, tiger,” I added with a snapping, sexy growl.

Al colored a mottled burgundy, a peculiar habit for a forty-fi ve-year-old deputy. He adjusted his gun in a self-conscious gesture, which made me wonder if he’d fi nger his manhood in front of me as easily. In law enforcement the size of your gun was closely related to the size of, well, your gun. Hmm. Was Al’s private stock an Uzi? Or a peashooter?

“Regardless,” he continued, unaware of my questioning gaze on his crotch. “If my wife heard me trash-talking with you I’d be sleeping in the den for a month.”

I set my hands on his face and slapped his reddened cheeks while I maneuvered around him.

Light spilled across the mud-crusted carpet when the steel front door blew open. All fi ve-foot-one inch of Missy Brewster, my 4:00 relief, sauntered in.

My tolerance level for Missy was lower than a stock dam during a drought. She embodied the skate-by-with-a-minimum-amount-of-eff ort civil servant attitude, versus the work ethic my father had literally pounded into me and which I couldn’t escape, no matter how menial the job. Lazy, whiny, and petty were Missy’s least annoying 6

I guessed she’d compiled her own list of my irritating quirks: punctuality, humanity, a stubbornness born of desperation.

Her crocheted handbag thumped on the fi ling cabinet.

She peeled off her NASCAR jacket, and slung the silver satin over the chair with a loving touch before adjusting her cleavage with a slow overhead stretch. A haughty look followed.

“Hey, Julie. Stud boy is waiting. Said something about you getting your ass out there pronto.”

I watched Al’s gaze linger on Missy’s mammoth breasts, crammed tightly into a pink t-shirt. My eyes followed his, but I refused to glance down at my own 36C

chest in comparison; there was none.

“Stud boy? You call him that and fl ash those boobs in his face?”

Her lips, the color and consistency of candied apples, turned mulish.

“Honey, they all look.” With a fake sigh of resignation, she squeezed her big butt in my chair and swiveled toward the computer to clock in.

She reached for a pencil, deigning to answer the phone on the fi fth ring.

Yuck. I added disinfecting the receiver with Windex to my list of duties for tomorrow.

“No, she’s still here.” Pause. “He’s probably messing with his computer. Want me to ring him?” A minute of silence followed; her false eyelashes batted with apparent panic.

Three Girls And A Wedding by Rachel Schurig
Evil Genius by Catherine Jinks
Huia Short Stories 11
The Perfect Someday (A standalone novel ~ Book three in The Mathews Family) by Beverly Preston
Anchorboy by Jay Onrait
Southern Cross by Jen Blood
Matchless: An Illumination of Hans Christian Andersen's Classic "The Little Match Girl" by Gregory Maguire
Finding Sophie by Irene N.Watts
The Ghost by Danielle Steel
The Girl from the Well by Rin Chupeco
Our partner