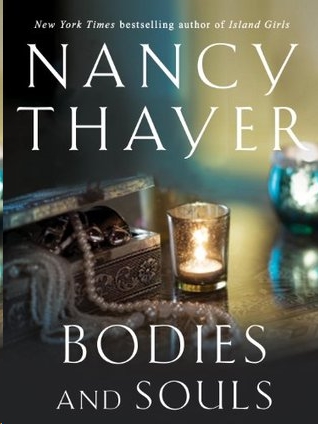 Bodies and Souls
is a work of fiction. Names, characters, places, and incidents are the products of the author’s imagination or are used fictitiously. Any resemblance to actual events, locales, or persons, living or dead, is entirely coincidental.

BALLANTINE and the HOUSE colophon are registered trademarks of Random House LLC.

Originally published in hardcover by Doubleday, an imprint of the Knopf Doubleday Publishing Group, a division of Random House in 1983.

This book contains an excerpt from the forthcoming book
Nantucket Sisters
by Nancy Thayer. This excerpt has been set for this edition only and may not reflect the final content of the forthcoming edition.

An Introduction from the Author

An Introduction from the Author

A lascivious young widow is one of the main characters in
Bodies and Souls
. She’s joined by a minister, a teenage girl, a seventy-year-old man, a “perfect” wife and mother, an imperfect divorcee, and an austere academic. They all attend the same church in Londonton, Massachusetts, and their lives intertwine in unexpected ways. According to my first publisher, Doubleday, this is a serious, thoughtful book about “the shocking secrets of a small town.” But there is humor here as well, and death, sex, sin, redemption, and all kinds of love.

I’m delighted that my early novels are being made available to my readers as ebooks. My style has changed slightly, as the world has grown faster, but my subject, family life, remains as mysterious and fascinating to me now as it was in these early books: falling in love, raising children, friendships and betrayals and forgiveness.

I hope you enjoy these early novels and discover some new friends there.

Here is the church

Here is the steeple
,

And see all the people
…

This Sunday morning the first chill of fall had risen from the land like the delicate silver frost on a plum. The grass was etched with rime; the sky foamed it. It seemed the sun had moved a crucial degree all at once, overnight, and there was a change in the air.

The Reverend Peter Taylor knelt alone in his church office to ask the Lord to give him the wisdom and strength to minister well to his congregation. Over the years he had established a ritual. In his mind’s eye he envisioned the vast arc of space, the churning galaxies, that most beautiful of planets, the blue Earth, the continent of North America, this New England town with its white colonial and collegiate stone buildings, and finally, his own modest white Congregational church with its storybook steeple. In his way, he supposed he was using magical thinking: by funneling his view of the world in toward himself and his church, perhaps he could also help God focus toward this minute segment of the cosmos. “Look, God, right down here—here we are.”

His knees hurt; he wasn’t used to kneeling. No one knelt in church anymore, and he thought it a pity, another sign of the continual division between mind and body. He was old-fashioned and believed that it would do his congregation good to compose their bodies in an attitude of worship and supplication, if only for a few minutes a week. Heaven only knew what positions those bodies got up, down, and into the rest of the week. He believed that it was man’s spirit that made him godlike, but there was no getting around the fact that as long as men and women inhabited corporeal bodies, it would be those bodies, that flesh, which told them what was important to the spirit. Beauty was not abstract; it was in a concerto by Bach, and came to humans through the delicate organs of the ear; it was in the sight of a naked body or the New England hills in autumn, and came to humans through the fastidious complexities of the eye; it was in the water after thirst, laughter after loneliness, embrace after absence. Messages came to the human spirit through the body. Peter Taylor believed that a few minutes of kneeling would do more to convince his congregation of God’s supremacy than all the words of his sermon.

But he was old-fashioned, and his congregation, for the most part, was not. Most of his parishioners were attractive and educated and affluent; many were chic, facile,
even lecherous. Life was too easy for some of them. Sometimes he wanted to ship them all off to live for a year in Harlem or India. But mostly he loved them, and he knew they had their share of sorrows, and more than their share of sins. They were a continual challenge to him: there was always something going on, even in this small and comfortable town, which brought him to a full test of his intellectual and ecclesiastic abilities. For he was a modern minister, and he knew there were seldom simple answers to human questions.

The bells were tolling; it was time to begin. He rose, brushed his knees, and crossed the room to glance at himself in the mirror. He had been told, often and with varying degrees of subtlety, that he was a handsome man, and although he tried to fight vanity, it was a help to him to know just how he looked before he faced his congregation. He was tall, broad-shouldered, and if he had put on weight here and there, the general effect was to make him seem massive, influential. His black hair was graying at the temples, and the lines his face had gained with age were a help. When he was younger, his blue eyes and symmetrical English features had made him seem too young, too untested, for such a position. But he had gained some wisdom with his forty-eight years, and this showed. He looked like a minister, and this gave him the confidence to take on the complicated crew who awaited him now. He left his office and walked down the hall and into the chancel.

Through the years the exterior of the First Congregational Church of Londonton had graced as many calendars as Marilyn Monroe because of its simple architecture, its classic steeple spiring toward the sky. But Peter preferred the interior of the church. He believed no one on earth could enter this sanctuary without feeling an exultation of spirits, and an attending leap of faith, if not in the reality of God, at least in the reality of grace. The walls of the church rose up around him for sixty feet, and were crowned by an oval ring of ceiling that was lightly vaulted to make the most of subtle domes. The walls and ceiling were soft white in color, simply ornamented by a rim of wood painted gold. The sanctuary was slightly longer than it was wide, with six long, high, narrow windows on each side. These windows were matched by six columns with composite capitals which were set in the semicircle of the chancel itself. The pews were hardwood painted white; the floor was covered with a deep red carpet that spoke more of old and dignified elegance than expense. The beauty of this church was not in any superficial decorations but in the basic architecture itself. It rose up and curved into itself with complete
simplicity, as if it had been built by men with peaceful hearts.

The building was situated so that on cloudless days the sun streamed into the first three windows on the right-hand side, making the burled cherry wood of the altar and the flowers on either side of it lustrous with light. Many members of Peter’s congregation complimented him on the beauty of that delineated radiance, as if he were personally responsible for the focused beam of light. But he knew how they felt; bright sunlight came through those windows with the benevolent force of a blessing. Still, Peter preferred the church on cloudy Sundays. Then all the windows were equally illuminated by a silvery-white glow, and Peter felt that they were all at one together, drawn together and encompassed by that gentler light.

Today was so cool and cloudy that for the first time in months, Peter’s congregation sat before him arrayed in sweaters, wool blazers, and heavy coats. Liza Howard was already wearing a fur coat, though she was probably wearing it more for the effect it had on others than for the warmth. People would just have to get used to sitting through church with their coats on, Peter thought, for with the rising cost of fuel it would be impossible to keep the church really warm. Perhaps the slight chill in the air would provide that edge of discomfort which kept people alert and awake. He gazed out at the congregation for a moment, counting the house, then bowed his head in prayer.

This prayer was the same as always: Dear Lord, now that they were all actually here, let what I have to say make sense to someone.

A man came up the four steps to sit across the chancel from him, and Peter raised his head and nodded. It was Reynolds Houston, the lay reader for today. Reynolds would read the Call to Worship and later, the Scripture lesson, and he would do it beautifully. In fact, no one in the world looked more like a minister than Reynolds Houston, who was so tall and slim he would have seemed ascetic, were it not for the sensuality of his hair. Few men in their fifties have beautiful hair, but Reynolds did, and although he wore it cut fairly short, there was no mistaking its abundance.

Reynolds was a conundrum of a man to Peter. His long stringy body seemed mismatched with his voluptuously handsome face; and it was unusual that a man with his cold, intellectual competence should speak with such a sonorous and soothing voice. Reynolds taught Latin and Greek at the local college and served on many committees for both the college and the town. One could often see his lanky body stalking across the grounds on one mission or another. He was seldom accompanied; he was the sort of man
who preferred his own company. Peter knew very little about Reynolds’s private life, and so he had been surprised, earlier this morning, when Reynolds had asked if he could speak with him after church regarding “a matter of grave concern.” Peter could not imagine what sort of problem it could be that this reserved man would want to confide. He studied Reynolds for a moment, admiring the cut of the gray flannel suit which must have been specially tailored to fit such a gawky body so elegantly. Reynolds was leaning forward in his chair, his head bowed, his arms resting on his legs, his hands folded in prayer; and Peter noticed the awkwardness of his very long fingers and hands, delicately embraced by the cuffs of an expensive cotton shirt, set with silver cuff links. Reynolds was an immaculate man, and his face was equally smooth just now; Peter could read no emotion there, no clue to his problems.

The choir began to sing the Introit, which announced that the service was beginning, and Peter’s mind turned to broader contemplations.

Reynolds rose and went to the pulpit to lead the congregation in the Call to Worship, then returned to stand by his chair as Mrs. Pritchard, the organist, pounded out the introductory stanzas of the first hymn of the morning. As Peter sang “When Morning Gilds the Skies,” he did not look down at his hymnbook, but out and around him at his congregation.