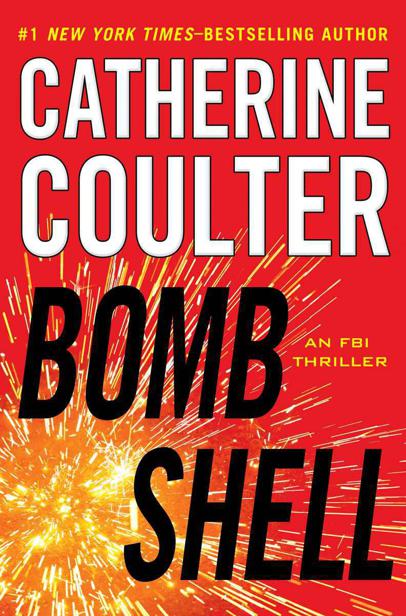 Double Jeopardy: The Target
and
The Edge
(2008)

A Special Announcement from Catherine Coulter

Special Preview of The Final Cut

She’d drunk way too much. She was an idiot. Why had she, Delsey Freestone, a reasonably intelligent twenty-five-year-old supposed adult, swan-dived into those last two margaritas?
Because the big cheese director of Stanislaus was treating you like his favorite student, making you his special margarita recipe, that’s why, and you were afraid to turn him down. To be honest, you were flattered, too. And what was in those margaritas that tasted so good?

She was very sure at that moment she didn’t want to know.

She didn’t understand why Dr. Elliot Hayman, the new director of the Stanislaus School of Music—
Call me Elliot, my dear
—had appeared to want to cut her out of the graduate student female herd at the party and bestow his margaritas and attention on her. Not only was Dr. Hayman in charge of the prestigious music school, he was also an internationally celebrated concert pianist, with a libido, she’d read in a critic’s review, to rival his glissandos. When it came to renown, he was in a different universe than hers. She and Anna Castle, a violinist from Louisiana and her best friend in Maestro, had decided Dr. Hayman enjoyed the role of director because it appealed to his vanity, but they also both acknowledged it was only the older graduate students, like herself, who believed that he was, at the core, faintly contemptuous of the students. On the other hand, he was a sharp dresser, dropping in conversations that he shopped twice a year in Milan for his suits, always fashioned for him by Bruno Giraldi himself. Whoever Bruno was, Anna observed, Dr. Hayman certainly dressed to impress.

So why had Dr. Hayman dogged her all evening, giving her entirely too much attention until she was certain every student within hearing distance now hated her guts?
Thank you, Dr. Hayman—Elliot—
that was just what she needed. And what would Anna say about him when she told her about his behavior tonight? She’d laugh and say something like, “Smile, Dels, and suck it up,” stretching it out in her lazy Louisiana drawl until Delsey would want to yank the words right out of her mouth. She’d wished all evening that Anna had come, but no, Delsey had had to fly solo.

Delsey supposed the sudden waves of gut-wrenching nausea combined with her flatlining brain had been heaven-sent, since it had gotten her out the door of Professor Rafael Salazar’s sprawling ranch-style home on Golden Meadow Terrace in under a minute, with no one the wiser, only one arm in her coat when she’d quietly closed the back door behind her. She’d sucked in the cold winter air, grateful to be out of Professor Salazar’s whooping hoedown, away from both him and his twin brother, Dr. Hayman, and wasn’t that a hoot? Twins! Separated as boys and ending up with different last names. The only thing they had in common, as far as she could see, was their incredible talent.

She drove very carefully until her head was pounding so hard and she was feeling so woozy she was swerving like a drunk, which, she supposed, she was
. No cops, please—too much humiliation.
She eased her ancient Spyder to the curb of Tinsel Tree Lane and shifted into neutral. She pressed her forehead against the steering wheel, willing the world to stitch itself back together for her, swearing to any power listening that she’d go back to her one-drink limit. She’d made that promise when she was only sixteen, after sharing a bottle of hooch with her boyfriend Davie Forman, and wanted to die, certainly not have sex with him in his daddy’s Mustang. Tonight was the first time she’d broken that promise in nine years.
What an idiot you are; you deserve freezing your butt off and having your head explode, and the misery of hugging the toilet in the morning.

She finally cracked an eye open to see the half-moon crystal clear overhead. It looked as cold and hard as the solid mountains of snow that blanketed everything around her—trees, street signs, cars, mailboxes. Big snow, the locals called it—unusual, the locals also said—yet here it was, a big honking snowstorm. At least it had stopped pelting down for a while, but they said it would begin again hard near dawn. She’d come to realize after the first heavy snow in December that if she hit a snowdrift, she and her Spyder wouldn’t be found until spring.

Looking at the unrelenting white made her miss the warm salty air of Santa Monica, scented with the night jasmine trellised on the stone fence surrounding her former apartment building. To top it off, her car heater was struggling to stay alive, her Spyder no more used to this circuit-freezing weather than she was. She sure wasn’t helping any, staying out all hours of this frigid night—it couldn’t be more than ten degrees, and counting down.
Houston, we have a problem.
She squeezed her eyes shut; what should she do?

She became aware of how very quiet it was, not a single owl hooting in the snow-drenched trees, not a single car or truck engine tunneling through the snow on the interstate only a quarter-mile away. No wonder; it was nearly one o’clock on Saturday morning. Only people she didn’t want to know about were up this time of night. She looked around and sent a silent prayer of thanks upward that there weren’t any cops, either. She knew she wasn’t up for convincing anyone she wasn’t drunk. She’d probably shatter the Breathalyzer.

She raised her head after a few minutes, held perfectly still for a moment, noticed she didn’t feel as dizzy and, blessed be, her headache was throttling down. She shifted the Spyder into gear and drove slowly, in a perfectly straight line, as only those who are impaired and know it do. After another six blocks, she turned off onto Hitchfield Avenue and then onto Lonely Bear Court. She saw her building up ahead on the right, a duplex with her one-bedroom unit on the bottom and Henry Stoltzen’s on top. Built as a solid red brick back in the twenties, it had been split up in the late nineties by the heirs to the old lady who’d lived there all her life.

She looked up to see Henry’s light on. Henry and his prized six-inch goatee had helped her move in the day she’d arrived in Maestro, fed her hot dogs and beer, and quickly become a good friend. He liked the popular songs she wrote and sang, even though he sat solidly in the classical corner, a gifted cellist who adored playing Jean-Baptiste Sébastien Bréval’s Sonata in C Major.

He seemed oblivious to most other people around him, only his music and his iPod tethering him to planet earth. She turned into her parking spot next to Henry’s, drew a deep breath, thanked the Almighty she was still alive, and even better, not in jail. She promised good works she told herself she wouldn’t forget by morning, as she slogged through the snow to her front door. She was shaking with cold when she finally fit her old-fashioned key into the lock and the door opened. She stepped into a blissful seventy degrees.

She locked the front door behind her, slipped on the two chains, and shoved the dead bolt home. She flipped on the light inside the door in the small foyer.
Home and warm. No more margaritas, no more one a.m. parties. I’m now a sensible woman, resolute and determined, and the Director of Stanislaus can go compliment someone in the reed section.
She saw Eileen Simons of clarinet fame in her mind’s eye, and knew she was interested in Dr. Hayman—
Elliot, my dear
. Why hadn’t Director Hayman loaded Eileen up with booze this evening and stayed away from Delsey? Eileen had been at the boozefest, as drunk as everyone else, and giving Delsey the “die, bitch” eye all evening.

Where had that left-field thought come from? Well, from being out alone and drunk in the boondocks of Virginia in the middle of the night, that’s where. Delsey bypassed the living room and went straight to the kitchen, swallowed three extra-strong aspirin and drank two full glasses of water. The tap water tasted nastier than usual, but she drank it anyway. She wiped the back of her hand across her mouth and walked through the hallway to the bathroom, turning on lights as she went. When she flipped on the bathroom light she saw the colorful South Seas shower curtain was pulled closed around the bathtub.

She never left the shower curtain closed because it made the bathroom look too small—well, unless she hadn’t cleaned the bathtub. Had she? Her brain was still fogged, and she couldn’t remember.

A hot shower, that was all she could think about, jets of hot water pounding her face, clearing out her head, making her want to live again. She stripped off her clothes, paused on the clip of her bra when she heard something, movement, something. Maybe a sharp breath? She didn’t move, listened hard. No, there wasn’t anything. Her brain was still squirrelly with tequila. She got her bra off, left her clothes in a pile on the bathroom floor, pulled back the shower curtain, and froze.

She’d never believed she was a screamer, but a scream ripped right out of her mouth, and then another, her brain screaming in tandem,
Not possible, not possible.
Her breath caught when she heard the sound again and whirled around, but she didn’t have time to be afraid before something hard as a brick smashed her on her head, and she didn’t scream anymore.

Playmate by Kit Reed
Forrest, Dawn - Sweet Water Wedding: Sharing Shannon (Siren Publishing Ménage Amour) by Dawn Forrest
Now or Never by Elizabeth Adler
Masked by RB Stutz
A Question Of Size: Stacey's Story (The Right Fit Series Book 1) by Lovett, Lucee
Douse (Book One: At the Edge of a Hurricane) by Hydra, June
Zane Grey by The Spirit of the Border
People of the Wolf by Gear, Kathleen O'Neal, Gear, W. Michael
The Falling Kind by Kennedy, Randileigh
Emily Goldberg Learns to Salsa by OSTOW, MICOL
Our partner