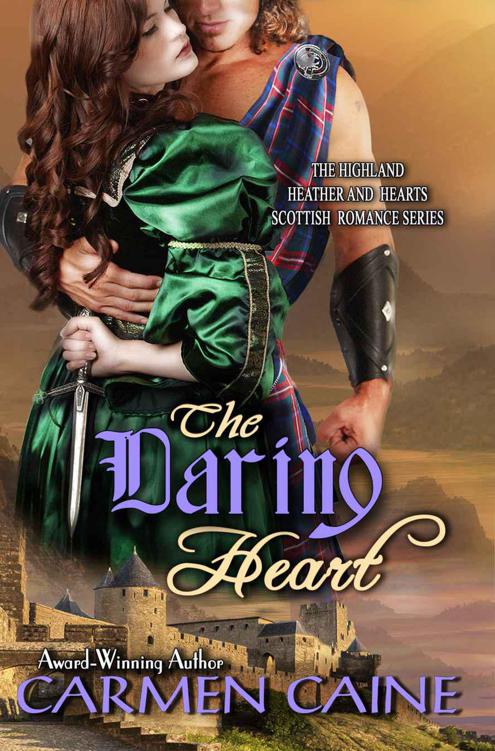 The Highland Heather and Hearts

This ebook is licensed for your personal enjoyment only. This ebook may not be re-sold or given away to other people. If you would like to share this book with another person, please purchase an additional copy for each person you share it with. If you're reading this book and didn’t purchase it, or it was not purchased for your use only, then you should return it to CarmenCaine.com and purchase your own copy. Thank you for respecting the author's work.

To my family, all of them, for their never-ending patience with me.

Though Julian and Liselle never existed, the true story of Thomas (Robert) Cochrane, King James III of Scotland, and his brothers, continues where “The Bedeviled Heart” left off. And while Dolfino Dolfin did exist and sold trade secrets that played a hand in starting the Venetian Salt Wars, the Vindactim never existed.

And while my goal is to weave history throughout these stories in an effort to make them all the more entertaining, they will always be romances first and historical second, my focus being on the human relationships between the characters.

"The Kindling Heart" begins the story with Bree and Ruan in the Isle of Skye.

"The Bedeviled Heart" covers Cameron and Kate's dramatic romance against the backdrop of court intrigue and witchcraft.

“The Daring Heart" brings the adventure of Lord Julian Gray as he meets his match in the Venetian assassin, Liselle.

"The Bold Heart" (formerly known as "The Loyal Heart") weaves the spell of fated love with Merry rescuing Ewan in the events leading up to the Battle of Sauchieburn and completes the circle of how it all began.

Chapter One … A Wicked Minx

Chapter Two … Love is an Illness

Chapter Three … The Hand of Fate

Chapter Seven … The Protection of the Vindictam

Chapter Eight … “Ach, I shouldna have kissed her!”

Chapter Ten … “Do ye have some kind of sack? I dinna trust her!”

Chapter Sixteen … The Cage of Pigeons

Chapter Nineteen … We Are Revenge

Excerpt from “The Bold Heart”

Chapter One – A Wicked Minx

He became aware of the sharp blade pressed against his ribs the exact moment the door to his bedchamber crashed open.

'Twas not the way he preferred to awake from a deep sleep.

The Venetian assassin he had been trailing the past week stood framed in the door, observing him with the deadliest of expressions. He was a lean, dark-haired man possessing an air of refinement. His nose was long and thin, and he peered across the chamber at Julian with one hand holding a torch aloft and the other firmly clasped upon the hilt of his sword.

The bed jiggled a little as the blade in Julian’s ribs dug a little deeper into his flesh, and then a woman's husky voice whispered softly in his ear, "Play nice, if you wish to live."

"Explain yourself, knave!" the assassin at the door roared at the same moment.

Under the covers, the blade slid along his chest and he caught his breath.

Ach, but he could recognize his own blade anywhere.

The canny vixen had stolen his own dagger from under his pillow!

Startled, he cast a quick sidelong glance at his bedmate assailant, and his lips parted in surprise.

Even in the flickering torchlight, he could see the lass was a feast for the senses! Honey-colored tresses cascaded over a creamy, naked shoulder. Her lips were wide and full, her nose pointed at the tip, and her lashes fluttered over stunning hazel eyes.

She nudged the dagger again, dangerously close to piercing his flesh.

There was a rasp of steel as the assassin crossed the chamber and pulled out his sword, cursing, "I'll have your head, knave!"

"It's too late, Orazio!" The hazel-eyed lass threw herself over Julian's bare chest. "We are wed, and the marriage has already been consummated!"

His reward was a twist of the blade. This time, he was
certain
it had drawn blood.

Orazio drew a sharp breath. "Liselle! What have you
done
?"

“I’m a grown woman, Orazio!” she replied. “I’ve reached my twentieth year and can do what I please!”

"Did you find her?" a hauntingly familiar voice asked from the passageway outside.

Julian blinked in astonishment as the dark-haired, sultry-eyed Lady Nicoletta, lady-in-waiting to Princess Anabella of Scotland, appeared in the doorway swathed in a velvet mantle, her full lips drawn in a tight, worried expression.

They stared at each other in shock.

"Lord Julian Gray!" Nicoletta was the first to regain control.

Julian licked his dry lips. "Nicoletta? What are ye doing in France?"

But Nicoletta was not listening to him. Running to the side of the bed, she placed her hands firmly upon her hips and glared at the lass still draped over Julian.

"Liselle, get out of that bed at once! Lord Gray is a man of the most disreputable ilk. You'll have naught to do with him!"

Julian began to snort in wicked amusement, but after one look at Orazio, quickly changed it into a cough. Adopting an insulted manner, he began to protest. "Ach, 'tis not true, Nicoletta! Ye've always misunderstood me!"

Orazio's dark brow swept up in astonishment. "Do you know this man, Nicoletta?"

"Does it matter?" the lass at Julian’s side asked pointedly. "He is my husband. The deed is done!"

Julian opened his mouth to object but shut it quickly when the tip of the dagger poked him again.

"Lord Gray, did you truly wed our sister?" Nicoletta asked in a strangled voice.

Julian caught his breath. Was the wee, malevolent beastie spilling his blood drop-by-drop, the sister of the deadliest and most-famed Venetian assassin? As was Lady Nicoletta?

He really had no choice but to go along with the vixen’s farce.

The man glowering above him, weapon drawn, was intent only upon securing his sister's honor. He could read it in the assassin’s eyes.

"Aye!" Julian growled with a flash of annoyance.

The blade beneath the covers bit him deeper.

He clenched his jaw.

Ach, but he was going to discipline this wee terror the moment they were alone. Clearing his throat, he confirmed in a strong tone, "Aye, I wed ... Lady Liselle ... last night."

But Orazio's eyes had narrowed suspiciously. "I would see both of your hands first, Liselle—and
then
hear the man speak."

With a smirk, Liselle arched her back and slowly lifted her hands out from under the covers. Dropping one hand to thread her fingers through Julian's fair hair, she lightly skimmed the palm of the other over his naked chest. "We've been properly wed, haven't we now?" she asked Julian in a low, provocative voice.

Beneath the covers, a new blade needled his flesh.

Had the lass found his dirk as well? And was she using her knees?

By the Virgin, but her skills were impressive!

At that, Julian paused, and for the first time in his life, experienced a ripple of genuine interest. He subjected the mischievous lass to a second, deeper look. She had the most unusual eyes he had ever seen; they were green, flecked, and ringed with gold.

And the expression in them was charmingly malicious.

He stared at her in wonder.

How had she slipped into his tightly locked chamber, avoiding the snares he had set just the night before at each door and window? And how had she slid into his bed and used his own dagger against him?

But most importantly, in just what exactly had the wicked sprite embroiled him?

"Then it appears I must welcome you into our family, Lord Julian Gray." Orazio laughed, but there was little humor in his tone and no sign of mirth in his eyes.

And then suddenly Orazio escorted Nicoletta out of the chamber, and closing the door, left Julian alone with Liselle.

The latch had scarcely fallen into place before Liselle sprang from the bed, sweeping up her gown from the nearby chest to shrug into its soft, vibrant green velvet. As the material fell in loose folds over her shoulders, she began to laugh.

It was a husky, throaty sound, one that Julian found strangely appealing.

"There's no need to hurry, lass. I wouldna mind if ye tarried a wee spell," he invited with a cheeky grin, patting the bed.

"Orazio will have your blood when he learns we’ve not been truly wed," she said sweetly, quickly capturing her shimmering waterfall of hair with a jeweled net. “You had best leave Sarlat, and right quickly!”

He knew that was sound advice. Orazio was a dangerous man, but at the moment, Julian found himself immensely distracted by the wee lass smiling down at him, her hazel eyes hinting of dangerous pleasures.

“Then let’s not tell the man we’re not, aye?” he suggested, eyeing her curves appreciatively.

Liselle leaned down to walk her fingers up his arm. “Alas, but I’ve no further use for you, Lord Gray.” She shared the same pouting lips and sultry smile as her sister, the Lady Nicoletta, but she was clearly younger and certainly more mischievous. And then she added in a whisper, “You are far too aged for me.”

Recalling she had just claimed to be twenty, Julian laughed. He was only a decade older. “Ach, just take a wee look at me, lass! I’m as brawny and virile as any man! Mayhap even more!”

She did take a look. A long, slow one, and then her lip crooked and a devious expression crossed her face. “Would you rather hear that you are simply not man enough to interest me, Lord Gray?”

Julian raised both brows. “No lass has ever said so of me afore!” He laughed outright, his curiosity growing even deeper in the trickster fluttering her lashes at him. Folding his arms behind his head, he settled back and asked, “Would ye care to enlighten me as to why ye’ve made your brother my enemy, then?”

“I haven’t the time,” she said, shrugging nonchalantly as she fastened the laces of her dress and stepped into a pair of finely embroidered slippers. Pointing a delicate toe at a coil of rope on the floor, she raised an eyebrow up at Julian.

He distinctly remembered tying the very same rope into a snare around the window the night before, in order to catch unwary intruders.

She had evidently read the confusion in his expression. With a smug but irresistible smile, she said, “You should really protect yourself better, Lord Gray. The incensed husbands and brothers of France are not as …
gòfi
as the Scottish! Ah, how shall I say it so you may understand?” She paused and tapped her lip, and then her eyes lit with a devilish glint. “Ah, you are like a lumbering ox … a bumbling jester, as well as a scandalous fool.”

Julian’s lips parted in surprise. While he readily embraced scandal—nay, he relished scandal—he was anything but a lumbering ox!

In reality, he was
Le Marin,
arguably the most famous and daring spy in Scotland, England,
and
France. And no one, not even his closest friend, Cameron Stewart, Earl of Lennox, knew that Lord Julian Gray and
Le Marin
were one and the same. Cameron thought Julian was an exceptional spy, but he little knew just
how
exceptional. The feats of
Le Marin
were legendary, and numerous were the theories of just whom
Le Marin
might truly be, theories that Julian found terribly amusing, especially in how far they fell from the truth.