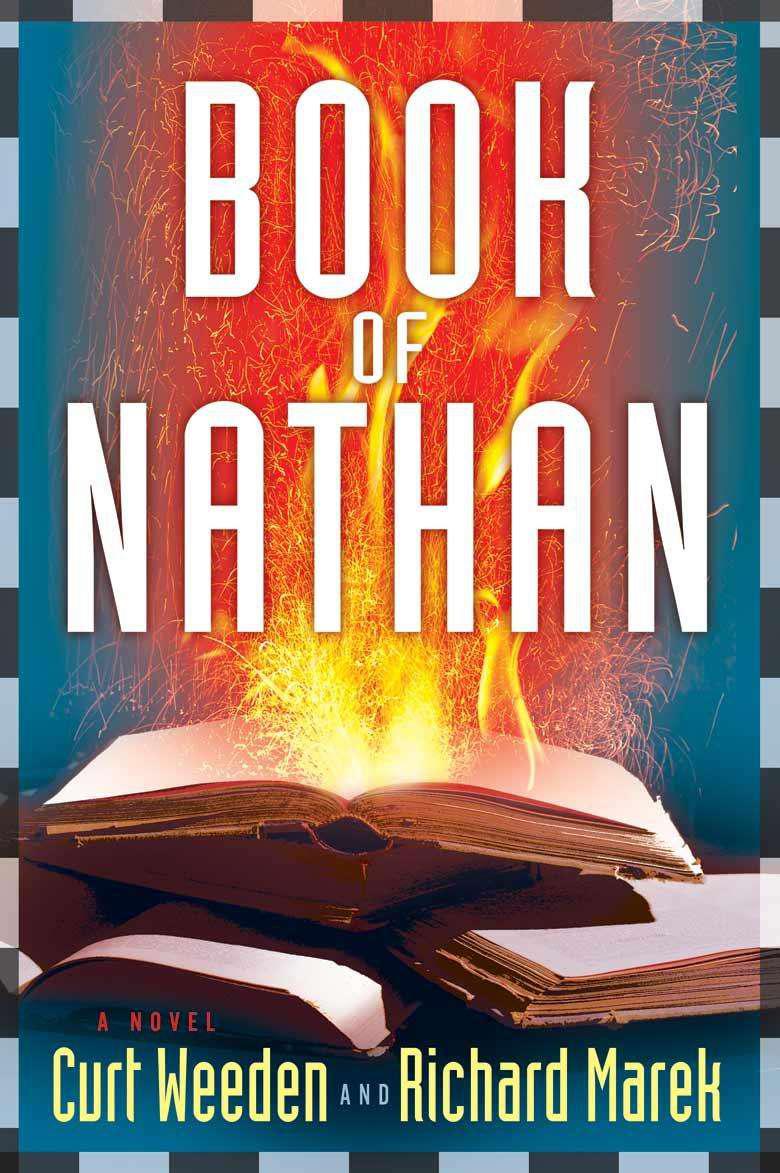 All rights reserved. No part of this book may be reproduced
in any form or by any electronic or mechanical means, including information
storage and retrieval systems, without permission in writing from the
publisher, except by a reviewer who may quote brief passages in a review.

This book is a work of fiction. Names, characters, places,
and incidents either are the products of the author’s imagination or are used
fictitiously. Any resemblance to actual events or locales or persons, living or
dead, is entirely coincidental.

Published in the United States of America by Oceanview
Publishing,

printed in the united
states of america

For Marti, our children, and grandchildren

There
was nothing distinctive about the woman. Her olive skin was commonplace in this
part of New Brunswick, New Jersey, where the neighborhood had gone from white
to black to brown over the past few decades. Bodegas and front yard statues of
Our Lady of Guadalupe left no doubt about present-day demographics. It was an
hour short of midnight—the start of the Latino parade to one of two downtown
hospitals that fueled their backroom nightshifts with the sweat of Dominicans,
Puerto Ricans, and Mexicans. Under ordinary circumstances, watching an
Hispanic, forty-something woman walk to a job that paid a notch above minimum
wage wouldn’t warrant a second look.

Except tonight the circumstances were far from ordinary.

The woman stormed toward me, her arms flailing. A dull light
filtering through the iron-barred windows of the Gateway Men’s Shelter caught
the terror in her eyes.

“Él va a matarme!”
The
woman was a few feet away when the tip of her laced-up oxford jammed into a
chunk of sidewalk cement pushed out of place by the root of a half-dead oak
tree. She landed hard, her right knee taking most of the punishment. Oblivious
to the blood running down her shin, she clawed at my trousers.

You can’t run a men’s shelter in Central Jersey without
picking up a little conversational Spanish. I had become all too familiar with
violar, asalter, muerte
since
rape, assault, and murder were never more than a few streets away from where I
worked.
Va a matarme
wasn’t
hard to decipher either—
going
to kill me
is an inner-city refrain that gets replayed far too often.
But even if I hadn’t been able to translate, the panic in the lady’s eyes was
sending the same message.

I knelt at the woman’s side and said as gently as I
could,“No, senora.
Él no es un asesino.
”

My words weren’t enough to stop the woman’s shaking. She
peered into the darkness and her fear materialized into a giant, grotesque
form. The thing that loped toward us wore layers of worn, ripped clothing and a
hood that covered most of its face.

“
Él es un hombre sin
hogar
,” I explained calmly. “A homeless man, senora. Coming
here—to this place.” I gestured to the building behind me. The Gateway Men’s
Shelter—depending on one’s perspective, either a Dumpster for losers or the
last-chance changing room for those who wanted to claw their way back into the
ranks of the socially acceptable.

“
El Dios nos ayuda
todos
,” the woman whispered and struggled to her feet. “God help
us all,” she repeated in broken English. I handed her a handkerchief that she
pressed against her knee.

“Him especially.” I nodded at the bogeyman.

The creature moved into a pale yellow swath of incandescent
light that leaked out the Gateway’s window. His hood fell from his head. The
lady gasped, made the sign of the cross, and ran into the night, the sound of
her footsteps gradually swallowed by the white noise of the city.

Later, I would learn his name. Miklos Petris Zeusenoerdorf.
His sallow skin was speckled with bumps and boils—a giant pickle with pimples.
His sparse hair grew in patches, the longest strands dangling like brown
threads over deformed cauliflower ears. Zeusenoerdorf was huge, but his bulk
wasn’t muscle. Blobs of fat rippled over his body like sheaves of discolored
bubble wrap.

In time, one in-the-know wino would sketch out the man’s
background. On the street, he was called Zeus and he had just finished a stint
at East Jersey State, a lockup that used to be called Rahway Prison.

“You scared the hell out of the lady,” I said and took the
man’s arm.

Zeus grunted out a mix of clicks and groans. It was his own
Morse code that I would never quite figure out. I led him toward the Gateway’s
front door, the portal for so many who had fallen to the bottom of the pile,
usually because of addiction, mental illness, or just plain bad luck. Inside, I
gave Zeusenoerdorf a closer inspection, and when our eyes locked, a
twelve-year-old memory took over with such an intensity that several seconds
passed before I could speak.

“You need a place to stay?” I asked him, trying to get past
the recollection of that autumn afternoon when I jogged past the Bowery Mission
on Manhattan’s Lower East Side. I couldn’t shake the picture of the
twenty-five-year-old woman helping a gaggle of booze-beaten men through the
front door of the mission. The woman told me her name and I handed her my
heart.

“A place to sleep—do you need somewhere to stay?” I asked,
trying to clear the image from my mind. Mercifully, the woman’s face faded away
but not before she pulled back the curtain to show me more of Miklos
Zeusenoerdorf. The man’s ugly exterior hid a simple, easily confused, gentle
person who had an IQ of an eight year-old and a speech impairment that only
made him all the more imperfect.

A mumbled, unintelligible response that I took as a “yes.” I
motioned Zeus to sit down and retreated to my office, pretending to look for a
Gateway sign-in form. When I was alone, I covered my eyes and drew in a long
breath. It had been a long time since I last held my wife, Anne. Yet she still
visited me often.

I would see her mostly on those days and nights when I had
been kicked hard by a job that came with a paltry paycheck and even less
respect. That’s when she would remind me why I was here—why I left behind a
very different life. The year Anne and I were married, I was an advertising
executive on a fast track and my wife was a social worker with the Coalition
for the Homeless. When I made senior V.P., which brought me a fat six-figure
salary and a load of perks, Anne could have easily given up her long hours and
skimpy compensation. But she didn’t. Our East Side condo and the summer rental
in the Hamptons were far less important to her than the coalition’s mobile soup
kitchen that kept hundreds of New Yorkers from going hungry. Not often, but
sometimes, she’d draft me into the coalition’s volunteer core so I could
experience what it was like to pull a man out of a gutter and onto his feet.
After a night of handing out blankets, underwear, and toiletries, I’d retreat
to my day job and try like hell to put my heart into pitching an ad campaign
for a new fragrance air freshener or a longer-lasting chewing gum.

For the first few years of marriage, I never really got to
know the homeless. Even though Anne made sure that I periodically worked my way
down humanity’s ladder just long enough to catch the stench of poverty and
hopelessness, the exposure came with a light coating. One whiff of despair was
enough to send me running back to Madison Avenue.

Eventually, though, I came to understand the passion Anne
had for her job. She was a converter; someone with an exceptional ability to
transform the wretched. Anne didn’t use threats or intimidation. No
incantations or banging the holy book. She did it all with her words—and her
incredible gray blue eyes that tunneled into the minds and souls of those who
had been dumped into America’s waste bin.

I scooped together a few sheets of blank paper from beneath
a small glass paperweight that usually went unnoticed:
For helping others to help themselves.

I’ve never put much stock in awards—but I kept this
Coalition for the Homeless memento as a reminder of the special connection Anne
had to those nine thousand families in New York City who have no permanent
address and no shortage of trouble. If it weren’t for my wife, I doubt I would
have come to understand what homelessness in America really means. If it
weren’t for a rare but deadly brain tumor called glioblastoma multiforme that
killed Anne, I doubt I would have had the guts to try to do something about the
problem.

The man cocked his mouth into a smile. Then I noticed he
wasn’t looking at me at all but was staring through the open door of my office
at a barely visible eight-by-ten framed photo.

“My wife,” I explained after turning to see what was
captivating Zeus. It was as if he knew Anne. “She died. Cancer. A long time
ago.”

“Let me show you where you’ll be staying,” I said and headed
toward the corridor that led to the first-floor resident quarters—a complex of
small rooms sparsely furnished with bunk beds, used army lockers, and not much
else. The big man pulled himself upright and took an awkward step toward me. As
if he didn’t have enough problems, Zeus also walked with a limp that put his
body slightly off center. When he reached the threshold that divided the
Gateway’s common area from the resident hallway, Zeus’s left foot caught the
edge of a small throw rug and he tumbled forward. His shoulder drove into my
hip and both of us fell hard to the floor. I disentangled myself and got back
on my feet, but Zeus stayed on his hands and knees. Eyes closed and mouth clinched
tight, he braced himself as if expecting the sting of a balled-up fist.

I reached for the man. “It’s nothing. An accident. Take my
hand.”

Zeus was suspicious. The Gateway was filled with men
accustomed to punishment and distrustful of those quick to help—so I
anticipated his reaction.

“It’s all right.” I kept my arm extended.

Seconds passed and then Zeus grabbed my wrist. I hauled him
from the floor.

It was the man’s way of saying thanks.

“It’s all right,” I said again, not disguising the
compassion I felt for him.

I suspected it wasn’t something he said that often.

Dr.
Douglas Kool’s moniker fits perfectly with his buttoned-up personality, his
thousand dollar suits and an impressive collection of Bruno Maglis. Doug lives
and works in Manhattan where high fashion and a suave demeanor resonate like a
mellow chord to those roosting at the top tier of society. Good thing. Because
Doug’s occupation is all about hustling money from the rich and the powerful.

City of Masks by Hecht, Daniel
New Species 04 Justice by Laurann Dohner
Snow Country by Yasunari Kawabata
X-Men: Dark Mirror by Marjorie M. Liu
Into His Keeping by Faulkner, Gail
Ignite Me (The Annihilate Me Series) by Ross, Christina
Bloodline by F. Paul Wilson
Knit One Pearl One by Gil McNeil
The Complete Novels of Mark Twain and the Complete Biography of Mark Twain by A. B. Paine (pulitzer Prize Committee), Mark Twain, The Complete Works Collection
RockYourSoul by Sara Brooks
Our partner