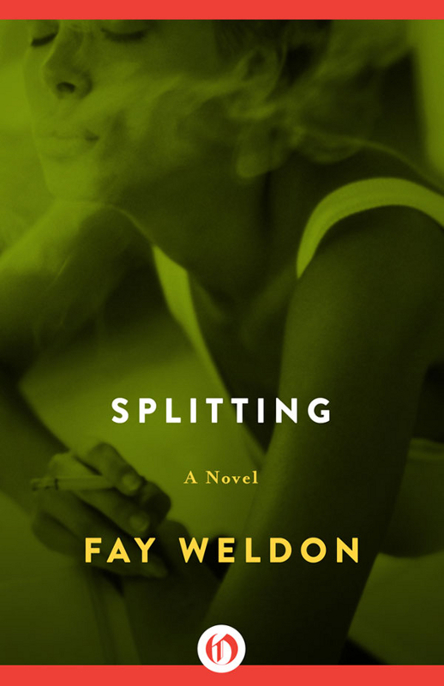 Part One
A House Divided

(2) How They Told Edwin’s Father

(4) Lady Rice, One Year into Her Marriage

(6) Angelica, Five Years into the Marriage

(7) Angelica, Six Years into the Marriage

(9) Angelica, Eight Years into the Marriage

(3) The Velcro That is Marriage

(8) Anthea in the Linen Room

A Biography of Fay Weldon

S
IR EDWIN RICE WAS DIVORCING
Lady Angelica Rice. Sir Edwin alleged in his affidavit to the Court—a document which the lawyer Brian Moss was now dictating to his secretary Jelly White—that Lady Angelica had behaved intolerably. And would the Court therefore put the couple asunder.

Jelly White’s hand trembled as she wrote. It was a pale, pretty, competent hand. Brian Moss liked it.

Angelica Rice, the document claimed, had committed adultery on many occasions with one Lambert Plaidy. Lady Rice had been discovered
in flagrante delicto
by Sir Edwin, and, what was more, in the Rice family four-poster bed. The housekeeper, a Mrs. MacArthur, would bear witness to this. Such behavior, typical of much similar behavior on the part of Angelica Rice, was unreasonable and intolerable to Sir Edwin.

Jelly White swallowed. Her throat was smooth and soft. Brian Moss liked that as well, and he very much liked the way she dressed: usually a neat knee-length skirt, pale cashmere sweater, a single row of pearls. He could see she was old-fashioned but he liked that too. The pearls were sufficiently translucent and uneven to be real.

Yes, it was intolerable for Edwin Rice to live with Angelica Rice: his health, his happiness were at risk.

Jelly White licked her pink perfect understated lips with a very red basic tongue. Brian Moss resolved not to become involved with her. He had a perfectly good wife at home. Jelly White was an ordinarily pretty blonde girl, of the two-a-penny kind, and too competent a secretary to risk losing.

The Petitioner, Edwin Rice, claimed that his spouse had acted in various other ways unacceptable to him: that she had been abusive and violent, pinching him while he brushed his teeth and otherwise molesting him; he alleged that her kissing of the family dogs amounted to bestiality, and her embracing of female guests to lesbianism. He petitioned the Court to let him go free of her.

Brian Moss heard Jelly White take in a whistle of outrage between her perfect little teeth, but her face remained peaceful and her hand was steady again as it continued to race across the sheet. He went on dictating.

The Petitioner claimed that Lady Angelica made excessive sexual demands on him; that she refused to have children; that she had dirty habits; that she was drunken, and took drugs; that she failed to provide proper food for his guests, thus humiliating Sir Edwin. And that, all in all, her behavior has been intolerable and unreasonable, and he wanted a divorce. Now.

“Goodness me!” said Jelly White, looking up from her shorthand pad. “I’m not accustomed to divorce work, but to me this smacks of overkill.”

“How well you put it,” said Brian Moss. “But overkill is our stock-in-trade. Here at Catterwall & Moss we prefer to offer the Court offenses in all available categories of unreasonable matrimonial behavior. Offer the minimum, as many firms do to avoid unnecessary trauma to the couple involved, and all you do is risk the Court’s rejection of the petition. What pretty white fingers you have!” And his strong brown fingers—or so he saw them—slid over her pale, slim ones, and Jelly White let them stay. Brian Moss did not, in any case, interfere with her right hand, only with the left, which was not observably making him money.

Brian Moss was a short, stocky, good-looking, quick-moving man with a well-developed jaw and an impetuous nature.

“Lady Rice seems to have been a perfectly dreadful wife,” remarked Jelly, “if this document is to be believed.”

“The Court will certainly believe it,” said Brian Moss. “It’s true I had some trouble finding an example of physical assault. We had to make do with the bottom pinching.”

“But Sir Edwin was happy enough to allege it?” enquired Jelly.

“In my experience,”, said Brian Moss, “a man very quickly comes to believe his own lies, especially in matters of divorce and if there is a new lady in his life.”

“And is there a new lady in his life?” asked Jelly White.

“That is an improper question,” said Brian Moss, “and confidential. But since in your new job you will have full access to all my relevant files, I suppose it hardly matters. Lady Anthea Box came along with Sir Edwin to our last meeting.”

Jelly White made a hiccoughing little murmur and excused herself rather rapidly. Brian Moss thought it must be for some intimate female reason it was best not to enquire into. Jelly White had been working for Catterwall & Moss for a week—first in the secretarial pool but now, at his request, solely for Brian Moss. She had come through the Acme Agency and her references were impeccable. It had already been mooted that she should stay on as a permanent employee. She was competent, alert and interested in her work. Jelly White returned after a minute or so from the powder-room, composed and co-operative, as ever. Whatever the trouble had been, she had dealt with it effectively and swiftly. He liked that.

“Bestiality stays on the books as a major matrimonial offense,” said Brian Moss, “though it’s rarely used. It was on Lady Anthea’s insistence that the kissing of the dogs is included in the petition.”

“Lady Rice has Barney Evans as her lawyer,” said Brian Moss, “so it doesn’t make much difference what she does or doesn’t do, he’ll bungle it. And once a thing is said, it stays in the mind, no matter who un-says it. Lady Anthea strikes me as a far shrewder person than her new boyfriend, if less agreeable.”

“I see,” said Jelly White, and then she asked, “Does truth and justice come into it?” but Brian Moss just laughed and chucked her under her perfect chin and said, “I hope I’m not going to get accused of sexual harassment,” and Jelly White said, “I wasn’t cut out to be a feminist, don’t worry, Mr. Moss.”

“Call me Brian in here,” said Brian Moss, “but Mr. Moss everywhere else.”

Brian Moss invited Jelly White to join him in a glass of sherry. “It’s perfectly possible,” said Brian Moss, “that Lady Anthea has been on the scene longer than Sir Edwin cares to admit. He was in here almost a year ago asking me about the parameters of divorce, matrimonial offense, division of property and so forth. He hasn’t put a foot wrong. I don’t think the wife will get a penny. It was she who walked out on him, vacated the matrimonial home; he even managed to discover her
in flagrante
first. The wealthy know how to look after themselves.”

“That’s why they stay wealthy, I suppose,” put in Jelly White, with an attempt at lightness, but she was pale, very pale. “You mean the bastard just set her up?”

“In my experience,” said Brian Moss, “men prefer the next wife to be in place before they get rid of the last. But no doubt the present wife will pick up her life well enough where it left off. She may even be well out of it. To all accounts it was a most unsuitable match. Lady Angelica strikes me as a woman without depth or complexity. Just rather passive, and very stupid not to have noticed what was going on. I hope you can get this document in the post today?”

“Of course,” said Jelly White, but it was two days before she did, and even then she put the wrong postal code on the envelope, so it was four days before the document reached Barney Evans. Those four days gave Lady Rice time to present her own petition, thus giving herself some minor advantage in the game that is divorce. Brian Moss swore when he found out, and blamed the post. The Rice couple, he could see, would not be the kind to wait peaceably for a “no fault, no blame” arrangement. Fault there was, blame there was, and fault and blame they’d have. Well, all the more money for him.

Lady Angelica Rice lay naked in her soft bed at The Claremont, an hotel just a stone’s throw from Claridges, where she had taken up residence, and appeared to talk to herself, as these days she so often did.

“It is my belief that we are suffering from a perforated personality,” said Angelica. “We must expect some confusion while we sort ourselves out.”

“I feel perfectly whole and sensible,” said Jelly. “Nothing the matter with me. What do you mean by perforated?”

“I mean we haven’t quite split,” said Angelica, “but if there’s any more trauma, by God we will. We won’t know any more what the other ones are up to; we won’t have to act by consensus; we’ll just own the body in turns. Or take over unfairly when the others aren’t looking. That’s what happens when a personality splits. And, like as not, we’ll get ourselves into even worse trouble.”

“I have more of a right to this body, than any of you,” said Jelly.

“Most of the time I can’t hear you anyway.”

“You see what I mean?” asked Angelica. “It’s happening already. There might even be others of us in here. Oh, Jesus! Lady Rice, where are you?”

“I’m so tired, so sad,” moaned Lady Rice. “I can’t really take any interest in any of you. I just want to be alone.”

“Jesus!” said Angelica again, and blocked them all off and took over. She ordered rosehip tea from Room Service, did her yoga exercises, took her Vitamin C and went to sleep.

This is the formal and official account, written by Jelly at a later date, when her narrative skills had been sufficiently honed, of how Angelica had come to be in such a pretty pass.

Chomsky argues that language is inherited, not learned: that all the languages of the world exist in the mind of the pre-verbal child; the skills of a particular language being triggered off by the environment that the child finds itself in. In the same way, Jelly believes, any number of possible personalities exist in the minds of all of us: normally only one is allowed to surface, but in some individuals, in some circumstances, a handful of others will become apparent. We may be conscious of these only as murmur of internalised conversation, of conflicting opinions, warring responses in the head: just sometimes their personalities are such there is simply no keeping them down.

Home was a modest house in the English countryside, outside the village of Barley. Here, on this small estate, teachers, social workers and such like lived; people with good hearts and low incomes. As for the farmworkers, they’d been eased out altogether by falling wages and rising prices. Who wanted farmworkers anyway? Houses grew more profitably than ever did cereal crops.