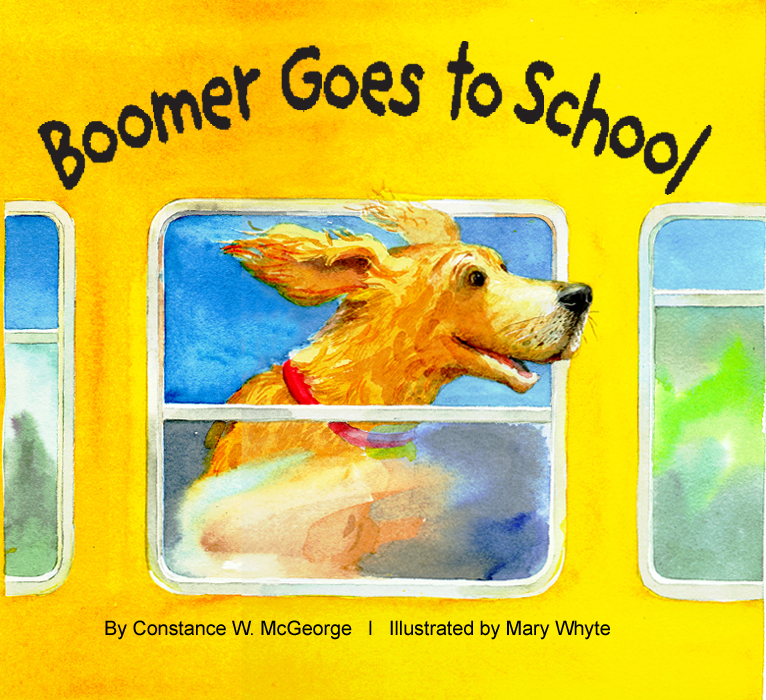 Boomer was just settling down after his morning walk, when suddenly, someone called his name. Then, Boomer saw his leash.

Boomer was very excited he thought he was going for another walk!

But instead, Boomer and his owner raced outside, down the driveway, and onto a big yellow bus. Boomer was going for a ride!

The bus stopped again and again. Boomer had never been on a ride with so many children. The ride was very noisy!

Finally, the bus stopped in front of a big building. The children climbed out. Boomer climbed out, too. He was quickly led inside, up some stairs, around a corner, and down a hallway.

At last, Boomer’s owner stopped at an open door.

Boomer looked in. It was a room filled with desks, tables, chairs, and children.

As Boomer was led to the back of the room, a loud bell rang. A grownup started talking. Everyone sat down and listened.

Soon, the grownup finished talking and the children jumped up from their seats. They scampered around to do lots of fun things. Boomer was let off his leash. He didn’t know what to do first!

and best of all…there was lunch!

After lunch, Boomer watched as the children gathered together and sat in a circle. Boomer was ready for the next game. But this time, all the children sat quietly.

Boomer started to get up, but he was told to sit down.

Boomer wiggled and squirmed. He was told to sit still.

Boomer barked and barked. He was told to be quiet.

Then, Boomer was led to the center of the circle. He still wiggled and squirmed. Boomer’s owner started talking it was his turn to share something with the class. 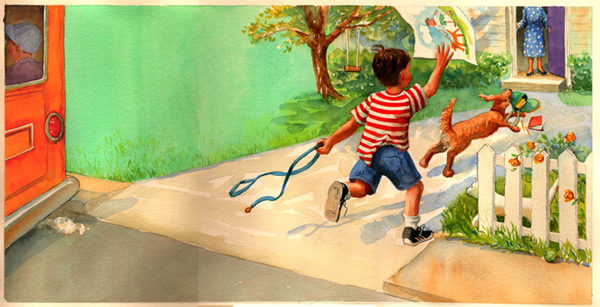 Suddenly, a loud bell rang and it was time to take another bus ride. At each bus stop, Boomer’s new friends patted him good-bye.

Then, the bus stopped at Boomer’s house. Boomer wagged his tail and bounded off the bus for home.