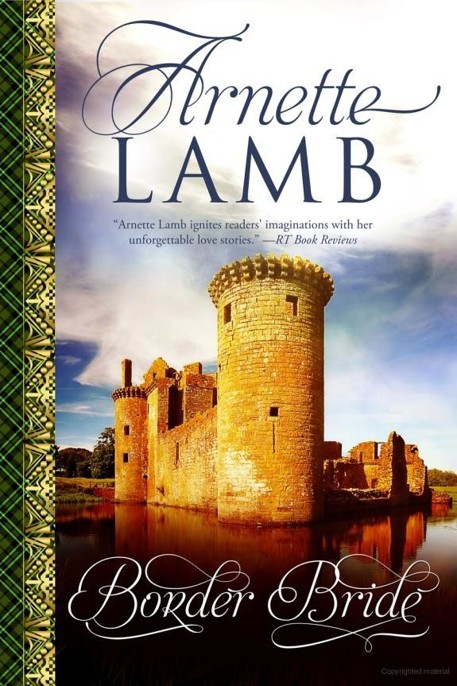 MALCOLM REACHED OUT AND GRABBED HER ARM.

When he stepped toward her, his foot tangled in the sheets. Before he could get his balance, he fell, pulling her down with him. Twisting, he managed to land on his back with Alpin sprawled on his chest. Her elbows poked him in the ribs. He winced and grasped her upper arms.

"What are you doing?" she demanded.

"Me? You're the one on top, but that was always the case with us, wasn't it?"

"You cannot seduce me." She tried to jerk away.

He held her fast. "Admit it, Alpin. You always wanted the upper hand."

"We were children then, playing games and squabbling. You hated me. And I…" Her gaze slipped to his mouth. She swallowed. "And I was…"

"I was naive about how far our playing would go."

He shifted beneath her. The movement gave vivid proof of just how much he'd changed over the years and how much he did want her.

"Now you know where such playing can lead…"

This book is a work of fiction. Names, characters, places and incidents are either products of the author's imagination or are used fictitiously. Any resemblance to actual events or locales or persons, living or dead, is entirely coincidental.

A Pocket Star Book published by

and her new parents,

And to the agent to die for, Denise Marcil.

And to my wonderful editor, Caroline Tolley, for her insight and her intuition.

Lady Alpin MacKay itched to yank off her mourning veil and fan her heated cheeks. And she would, once her visitor stopped eulogizing her late guardian, Charles, and started reading the will.

"A sober man and a defender of the true faith," the lawyer, Othell Codrington, was saying.

"A widower to envy…"

A man to pity. After his wife, Adrienne, passed away, Charles had spent a decade grieving himself to death. As an impressionable girl, Alpin had longed to find a man who would love her as deeply as Charles had loved his wife. But she also wanted a man who would not break under tragic circumstances. Years and the reality of island life had crushed her romantic dreams.

"A man shrewd in business, yet fair…"

A misconception. For ten years Alpin alone had managed every detail of the vast plantation, from the purchase of biscuit flour to the harvesting of the cane.

And to the company of his beloved late wife. Thank God.

A soft breeze wafted across the veranda and filled the air with the sweet aroma of boiling sugar. Alpin sighed. Paradise Plantation would belong to her now—the spacious two-story house, six and one-half acres of manicured lawns, one thousand acres of fertile fields recently denuded of muscovado sugarcane; fifty-six English servants, eighty slaves, scores of thatched huts, a dozen narrow barrack houses, four water wells. The wicker chair on which she sat. The copper tub in which she bathed. The mosquito netting draped over her bed. The carriage, the cart, the chicken roasting on the spit. The precious mill with its twin chimneys spewing smoke into the tropical blue sky. Hers.

The promise of independence sent her spirits soaring. Life on the plantation would continue as it had. But not for the slaves. Five years ago she'd persuaded Charles to free them. The neighboring planters had been outraged. Under pressure, Charles had yielded to the conservative element. Now Alpin MacKay would stand fast in her beliefs.

A drop of perspiration made a slow, ticklish slide from her temple to her jaw, down her neck, and inside the collar of her black fustian dress. Ignoring her discomfort, she stared at the leather satchel perched on the solicitor's lap. Would he never read the will?

When he paused to draw breath, she said, "You're very kind, Mr. Codrington, to save me a trip to Bridgetown. And you must be highly skilled, for Charles said he would trust his affairs to none but you."

The attorney sat straighten Sweat streamed from beneath his powdered wig and soaked his lace-trimmed cravat, turning the gentlemanly concoction into a soggy knot of wilted ruffles. "That ever was the case, my dear. Charles made an impressive go of it here." He cast a covetous gaze toward the mill. "Although none of us have ever seen the enterprise."

Let this city lawyer and everyone else think Charles had managed Paradise and modernized the mill. Alpin needed no praise for her work, only peace of mind and security. Soon she would have both. She fought the urge to drum her fingers impatiently. "As you say, Charles was a gentleman among men and concerned about the welfare of those in his keeping."

"I met him five years back—before he added that new contraption to the mill." Codrington opened the satchel, which contained dozens of papers. He withdrew a beribboned document bearing a golden seal the size of a fig. "His generosity was a testament to his Christian convictions." A benevolent smile curled the lawyer's lips and revealed several missing teeth. "He's left you a generous stipend."

She needed no allowance. Profits from the sugar would more than support her. Dumbfounded, she repeated, "A stipend?"

Like a child reading a primer, he traced each line of the document with his forefinger. "There are the usual bequests to servants. A fellowship for his club. Ah, yes. Here it is. 'One hundred pounds a year to my cousin, Lady Alpin MacKay.'"

Icy fingers of dread crept over her skin. Her throat grew tight. "And…"

Never! she silently raged. Charles had provided the funds for a visit to the Borders of Scotland and England, but only if she wanted to go. Which she didn't. "How considerate of him."

A sand fly landed on Codrington's nose. He swatted it away. "You may, of course, take any family heirlooms."

Knowing the veil concealed her wide-eyed astonishment, Alpin put all her effort into keeping her voice calm. She would cut cane to earn her keep before she'd depend on any man again. "What of Paradise Plantation?" She held her breath. If Charles had foolishly gambled it away or mortgaged it…

Codrington batted the fly again. "I am at liberty to say only that five years ago he transferred ownership of all his worldly possessions. A tricky matter for some in my profession, considering the distance and correspondence required, but quite simple for me. Mr. Fenwick will continue to oversee the estate until the owner decides what to do with it."

Fear buzzed in her ears, obliterating the pounding of her heart and scattering her thoughts. Paradise gone. Impossible. This was her home. Where would she go? She could challenge Codrington, but to what end? She would expose her bitterness. Jeopardize any chance of righting this wrong.

Right it! Keep your wits. There's time aplenty to learn the facts and think out a plan. Henry Fenwick was a capable and kind overseer, but he despised the ruling class of Barbados.

She took a deep breath and put on a cheery face. "To whom did Charles transfer ownership?"

In a protective gesture, Codrington closed the flap on the satchel, fastened the buckle, and folded his hands over it. "The transfer was a private transaction between gentlemen. I'm sworn to secrecy." He handed her the will. "Have you mastered reading, Lady Alpin?"

In four languages. But the slimy toad needn't know that. Let him think her ignorant; his own superiority might loosen his tongue. "The art of deciphering words can be difficult."

Benevolence lent him a pitying air; his mouth went slack, his hands relaxed. "I understand. And I suppose I can tell you that by transferring the plantation to another party, Charles was repaying an old debt of gratitude."

Gratitude? To whom? How could Charles have been so cruel as to leave her with only a paltry stipend? She had forgone marriage to shoulder his responsibilities. And for what? To care for a man who had nursed a broken heart from a bottle and passed his wealth on to someone else? Her sacrifice had been for nothing. Someone else owned Paradise.

Her stomach roiled. Who?

The answer lay in that satchel. Why else would Codrington guard it so fiercely? A name. She needed a name. Hatred filled her. If she could examine those papers she'd have a target for her ire. She knew the way. Once she had Codrington away from the house, she'd excuse herself for a female necessity.

But first she had to get his attention. She swept off the veil. He stared, gape-mouthed.

"Is something wrong, sir?"

He fumbled with the satchel. "I, ah… You, uh… It's just that Charles told me…"