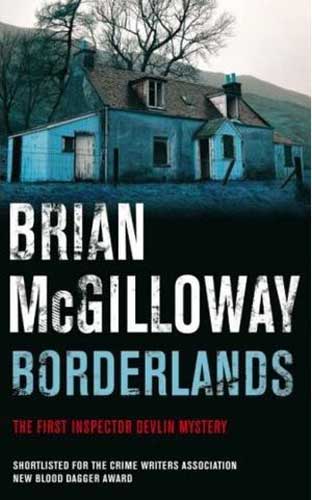 an imprint of Macmillan
Publishers Ltd

Associated companies throughout
the world

and for my parents

It was not
beyond reason that Angela Cashell's final resting place should straddle the border.
Presumably, neither those who dumped her corpse, nor, indeed, those who had
created the border between the North and South of Ireland in 1920, could
understand the vagaries that meant that her body lay half in one country and
half in another, in an area known as the borderlands.

The
peculiarities of the Irish border are famous. Eighty years ago it was drawn
through fields, farms and rivers by civil servants who knew little more about
the area than that which they'd learnt from a map. Now, people live with the
consequences, owning houses where TV licences are bought in the North and the
electricity needed to run them is paid for in the South.

When a
crime occurs in an area not clearly in one jurisdiction or another, both the
Irish Republic's An Garda Siochana and the Police Service of Northern Ireland
work together, each offering all the practical help and advice they can, the
lead detective determined generally by either the location of the body or the
nationality of the victim.

Consequently
then, I stood with my colleagues from An Garda facing our northern counterparts
through the snow-heavy wind which came running up the river. The sky above us,
bruised purple and yellow in the dying sun, promised no reprieve.

We
shook hands, exchanged greetings and moved to where the girl lay, prone but for
one hand, which was turned towards the sky. The medical examiner, a local
doctor named John Mulrooney, was kneeling beside the girl's naked body, testing
her muscles for signs of rigor mortis. Her head rested at his knees. Her hair
was blonde at the ends, but honey-coloured closer to her scalp, her skin white
and clean except for thin scratches across her back and legs caused by the
brambles through which her body had fallen. A SOCO leaned in close to her,
examining the cuts as the medical examiner pointed them out, and took
photographs.

We
watched as three or four Gardai moved in to help turn her over. I stepped back
and stared across the water to the northern side, where the arthritic limbs of
the trees stretched towards the snow clouds, the black branches rattling in the
winter wind.

"Do
you recognize her, sir?" one of the northerners asked, and I turned back
to the girl, whose face was now exposed. My vision blurred momentarily as a
breeze shivered across the river's surface. Then my sight cleared and I moved
over and knelt beside her, suppressing the urge to take off my jacket and
cover her with it, at least until the Scene of Crime Officers were finished.

I
nodded my agreement. "He's right," I said, turning to the northern
Inspector, a man called Jim Hendry, whose rank was the same as mine but whose
experience was vastly greater. "She's ours, I'm afraid."

He
nodded without looking at me. Hendry was at least a head taller than me, well
over six feet, with a wiry frame and dirty, fair hair. He sported a thin, sandy
moustache at which he tugged when under stress; he did so now. "Poor
girl," he said.

Her
face was fresh and young; she was fifteen or sixteen at most. She wore make-up
in a way that reminded me of my own daughter, Penny, when she played at being a
grown-up with my wife's cosmetics. The blue eye-shadow was too heavily
applied, contrasting with the redness of her eyes where the veins had burst in
her final moments. Her whole face had assumed a light-blue hue. Her mouth was
partially opened in a rictus of pain; the bright red lipstick she had so
carefully applied was smeared across her face in streaks.

Her
small breasts carried purple bruises the size and shape of a man's hands. One
bruise, smaller and darker than the others, resembled a love bite. Snowflakes
settled on her body as gently as kisses and did not melt.

Her
trunk and thighs were ivory white, though her arms and the lower parts of her
legs were tanned with cosmetics, the streaks and misapplication clear now
against her pallor. A pinkish colour was forming on her legs and chest. She
wore plain white cotton pants which were inside out.

He
stood up and peeled off the rubber gloves he had been wearing. Then he stepped
away from the body and took a cigarette offered to him by a Garda officer.
"Hard to say. The body is fairly stiff, but it was a cold night so I can't
really give you time of death. More than six hours, no more than twelve. You'll
know better when the autopsy's done. Cause of death - I can't be totally sure
either, but I'd say the bruising on her chest is significant. That blue tinting
of the face is caused by smothering or crushing of the chest. That, and the
chest bruising, would suggest suffocation, but that's an educated guess.
Lividity indicates she was moved after she died, though you hardly need me to
tell you that. Naked women don't just appear in the middle of fields."

"Signs
of something. Her fingernails are bitten so close I doubt you'll get anything
from under them. Sorry I can't be more help, Ben," he said to me. "I
can tell you that she's dead, and that someone killed her and dumped her here,
so it's over to you now. The state pathologist will be here as soon as
possible."

"Presumably
this was sexual," I said.

"Don't
know for sure. The pathologist will take swabs as a matter of course.
Personally, I'd say fairly likely. Good luck, Ben. Take it easy." With
that he dropped the gloves into his case, lifted it and walked up the
embankment to his car, barely looking at the body as he passed it.

I
looked again at the girl. Her hands rested on the leaves beneath her, the
bright red nail polish a little incongruous on fingers so small and on nails
bitten so near to the quick. There was a little dirt around her nails, and soon
enough a SOCO wrapped her hands in plastic bags which he secured at her wrist.
I noticed that, on her right hand, she wore a gold ring set with some type of
stone. It looked too old-fashioned for a girl of her age; a family heirloom, a
gift from a parent or grandparent, perhaps. The stone was tinted green, like a
moonstone, and surrounded by diamonds. I asked the photographer to take a shot
of it. As he did so, the flash illuminated an engraving on the band.

"Looks
like something's written on it, sir," he said, crouching right down and
holding the camera in one hand as he angled her hand slightly with his other.
Then he focused the camera tight on the ring. "I think it says AC, sir:
her initials."

I
nodded for no particular reason and turned again to the group of northerners.

"Shitty
enough one to get the week before Christmas, Devlin. Good luck to you,"
Hendry said, nipping off the end of his cigarette, then putting the butt in
his pocket so as not to contaminate the crime scene. That was a bit of a joke.
Our resources in the arse- end of Donegal are hardly FBI quality and, besides a
dozen or so policemen and the waiting ambulance crew and the group of poachers
who had discovered the body, God only knew how many other people had tramped
back and forth past the body and along the roadway where those who dumped it
must have stopped.

We
would look for distinctive tyre treads, footprints, and so on, and try to find
whatever forensics we could, but the spot where this body had been abandoned,
though secluded, was only a few hundred yards behind the local Cineplex. On
weekend nights this whole stretch of lane was lined with cars, each respecting
the other's space, obeying an unspoken rule of privacy to which I had myself
subscribed when younger, when I was finally allowed to take my father's car to
collect my girlfriend. The makes of cars had changed since then - and I tell
myself, in moments of righteous indignation (though I accept that it's probably
not true), that the kind of activities in which the couples engage has probably
changed too. However, the place remained the same - as dark and furtive as any
of the clumsy embraces which take place on back seats there at night. Indeed,
it was possible that Angela Cashell had met her death in such a car.

"They
might have been from your side," I said to Hendry, motioning towards the top
of the embankment, where those who had left her must have stood.

"They
possibly are," he agreed, "but this one's yours. This must be your
first murder since—"

"Rightly
bloody so," agreed another northerner.

"Oh,
there's been more since," I said. "We just haven't found all the
bodies yet."

Hendry
laughed. "We'll help any way we can, Devlin, but you're the lead on
this." He looked at Angela one last time. "She was a lovely-looking
girl. I'd hate to have to tell her parents."

"Oh,
I know enough," Hendry replied darkly and winked. "British
Intelligence isn't totally down the drain yet." With that, we shook hands
and he walked off towards his own side, steadying himself against the thick
buffets of air carrying the smell of the water across the borderlands.

Johnny
Cashell was known to all the Gardai in Lifford on a first- name basis, having
spent many nights in the holding cell of the small police station in the
centre, of our village. In fact, when the county council recently gave the
whole village a facelift, putting new lamps and hanging-baskets all around the
cobbled square and benches along the main roads, we named the bench outside the
station "Sadie's", in recognition of the amount of time spent on it
by Cashell's wife while she waited for him to be released in the morning from
the drunk-tank.