Read Born of the Night Online

Born of the Night 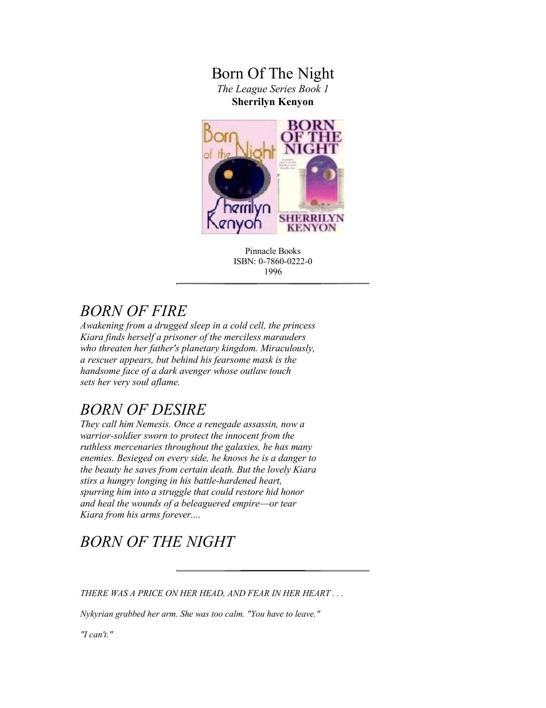 Born Of The Night

Awakening from a drugged sleep in a cold cell, the princess

Kiara finds herself a prisoner of the merciless marauders

a rescuer appears, but behind his fearsome mask is the

handsome face of a dark avenger whose outlaw touch

They call him Nemesis. Once a renegade assassin, now a

warrior-soldier sworn to protect the innocent from the

ruthless mercenaries throughout the galaxies, he has many

enemies. Besieged on every side, he knows he is a danger to

the beauty he saves from certain death. But the lovely Kiara

stirs a hungry longing in his battle-hardened heart,

spurring him into a struggle that could restore hid honor

and heal the wounds of a beleaguered empire
—
or tear

Kiara from his arms forever....

BORN OF THE NIGHT

Nykyrian grabbed her arm. She was too calm. "You have to leave."

"Pitala and his kind will do anything to accomplish their mission. That includes bombing this theatre and
everyone in it. They don't care how many lives they take as long as yours is one of them."

Kiara pulled away from him and walked into the hallway. Her toe struck something solid. She looked down.

On the floor were the bodies of her dead guards.

Her screams echoed through the hallway.

Nykyrian drew her into his arms and cradled her head against his chest. "Don't look," he whispered, his
chest tightening into a painful knot of suppressed emotion. He held her while she sobbed. Her hot tears
soaked through his shirt, forming chills on his skin. The soft scent of flowers drifted from her hair. He
tightened his arms around her, wishing he could have something he could never have, wishing for things he
could never give her— like peace, safety, and a better world.

"Everything will be fine," he said soothingly.

"How dare you!" Commander Tiarun Biardi glowered at the Ambassador, his anger

barely under his rigid control. In all the years he had ruled the Gouran Empire and sat as

President of the Gourish Consulate, he had never felt as weak and helpless as he did now,

facing the Probekein Ambassador before him.

Tiarun stood, glaring at the source of his agitation. "You can tell your emperor that we

Calmly, slowly, the ambassador came to his feet, the silk of his robes rustling around the

bulk of his form. "We shall have the rights to that outpost, or every member of this

Council will feel the bite of Probekein justice." He stared alternately at the eight

councilors seated at the round table before him.

From the dim light cast by the overhead lamps, Tiarun saw the color fade from the faces

of his peers. His own heart pounded in trepidation.

Each of them knew the ferocity of the Probekeins — a warring race, they lived at the

expense of weaker peoples. Even the design of the ambassador's gaudy, blood-colored

robes reminded him of a wrongfully conquered planet.

The two men stood staring at each other from opposite ends of the table, neither would look away or blink. Tiarun sensed the Councilors' fear as they thought over the threat. His

own fear thundered in his veins like a disease, threatening to rob him of his strength, his

Stiffening his spine, Tiarun knew he couldn't allow himself or his government to be

subjected to the whims of the ambassador's race, no matter the consequences. It was his

duty, along with every member there, to ensure the peaceful existence of all inhabitants

of his world. If they gave in now, the Probekeins would think them weak and powerless.

"You may kill me," Tiarun said bravely. "I would rather die than allow you the weapon you intend to build!"

The ambassador gave an evil, lopsided smile. "As a soldier, you have proven your life

means little compared to the greater good of your people. But," he paused in his true

Probekein melodramatic role, gauging their reactions before he continued, "are you so

free with the life of your daughter?"

Tiarun clenched the edge of the table, his knuckles turning white. It took all his self-

restraint not to leap across it and strangle the ambassador. "My daughter is an

acknowledged performer of the arts and is protected by the Code. You cannot touch her!"

The ambassador scoffed. "No? What of the other members of this Council? Their

children are not so protected. But then, neither is yours, Commander. I know of many

who care very little for the Code and its dictates. You will allow us to mine the surata

mineral, or your children
will
die."

cold glare. He knew he would not find mercy at the Probekein's hands.

"You cannot threaten us!" Councilor Serela spoke, wiping perspiration from her brow

with a lace handkerchief.

A wave of respect rushed through Tiarun. He was grateful the Council continued to

The ambassador raked Serela with his glare, then narrowed his eyes at Tiarun. "Do you

"Then guard your children well." The ambassador turned with a whirl of his silken robes.

His two-man guard fell in beside him like silent specters beside a demon lord.

The door slammed closed behind them.

Tiarun breathed a sigh of relief at the dramatic exit.

"Dear God, protect us," Serela whispered from her chair next to him, a tear sliding down her pallid cheek. "I have only one son."

Tiarun placed a comforting hand on her shoulder while thinking of his own daughter,

Kiara. "I move we adjourn this meeting. We should all return to our homes and secure the

The Council clearly agreed. The meeting broke up in a state of controlled panic. Tiarun

drew a ragged breath. He closed the file before him, watching his friends hurry from the

room. He had to find his daughter and protect her. She was the only family he had left.

He couldn't stand for Kiara to be killed because of him— as her mother had been.

Fear constricted his throat, making it difficult for him to breathe. His country or his

daughter—dear Heaven, what a choice! It made him dizzy.

Determined to keep his precious daughter safe no matter the cost, he left the room.

She had been kidnapped!

her darkened hotel room. Someone had come into her room during the late hours and

drugged her. Trembling in fear, she could still feel the cold, rough grip moving over her

skin, feel the bite of the injector as the drug seeped into her bloodstream. She never had

the chance to see who it was, or to even call for help.

Now, her head ached terribly as the last remnants of the drug slowly wore off. An acrid

stench filled her senses, choking her with its pungency.

To her relief, she was alone, lying face down on a rotting mattress. With a grimace of

distaste, she pushed herself up and nearly fell as a wave of dizziness buzzed through her

head. She caught herself against the wall next to her, a roughened spot of rust scraping

the palm of her hand.

"Great," she mumbled. "No equilibrium. What am I supposed to do now, wait patiently until they come back?"

Even as she spoke the words, Kiara knew she wouldn't— couldn't— do that. Her father

hadn't reared a stupid daughter, and she had learned many tricks over the years, including

the ability to pick a lock.

A smile curved her lips as she headed toward the door on unsteady feet. True, it had been

after curfew, but Kiara was sure she would remember how. She had to.

Kiara ran her hand over the smooth keypad. The lock appeared to be standard military

issue— not too different from her father's. In fact . . .

She stopped, a chill rushing over her.
A military lock.
A lump of dread burned in her throat as she realized she wasn't kidnapped for money. She was a political prisoner!

"Oh, Papa," she whispered, wondering what he had gotten them involved in.

This had always been their worst fear, for her to be taken by one of his enemies. Kiara

had never given proper credence to her overprotective father's warnings. Now, she

"Stop it," she commanded herself. If her conclusion was correct, then she must free

herself and return home before her father jeopardized their government for her.

"This lock will be easy enough," she assured herself with confidence.

Popping her knuckles, she entered a code. The keys beeped melodically as she pressed

them in. A light flashed across the top of the pad, displaying her chosen code.

After almost half an hour of trying, she was ready to give up. "Come on, Kiara," she said aloud. "All you've got is time. There's nothing else for you to do, except sit around and feel sorry for yourself!"

With a sigh, she glanced about the room, noting the inordinate amount of garbage strewn

across the floor. Kiara wrinkled her nose in distaste. The thick, steel walls were covered

by huge spots of rust and corrosion. She wondered how this craft ever passed space

She turned back to the lock and began pressing more buttons. As the light hummed on

again, she heard footsteps approaching in the corridor outside. Kiara bit her lip in

indecision. She cast her gaze around searching for a weapon. Only the wilted garbage met

her sight. Kiara sighed. The only help the garbage offered was the possibility her

Red Earth and Pouring Rain by Vikram Chandra
Dirty Secrets by Karen Rose
Prince of Power by Elisabeth Staab
Time to Heal (Harlequin Heartwarming) by Karen Young
Freelance Love by Alvarez, Barbara
One and Only by Bianca D'Arc
The Fangs of Bloodhaven by Cheree Alsop
Bittner, Rosanne by Texas Embrace
Year's End: 14 Tales of Holiday Horror by J. Alan Hartman
Southern Gossip: A Complicated Love Story by Tiece
Our partner