Read Boston Jacky: Being an Account of the Further Adventures of Jacky Faber, Taking Care of Business Online

Boston Jacky: Being an Account of the Further Adventures of Jacky Faber, Taking Care of Business 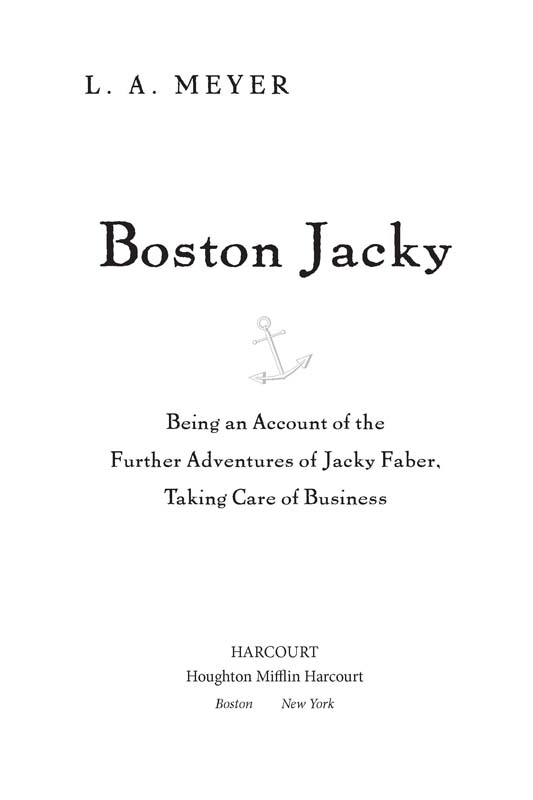 Boston Jacky: being an account of the further adventures of Jacky Faber, taking care of business / L.A. Meyer.

Summary: The irrepressible Jacky Faber, recently arrived in Boston, finds herself at odds with the Women's Temperance Union and local residents angry at the arrival of hundreds of Irish immigrants on a ship owned by Faber Shipping Worldwide.

And this time, just for Annetje .Â .Â .
who has always taken care of business.

“Boston! Hooray!” I exult, as the tall church steeples of the city come into view.

I'm up on the crow's nest as lookout as we enter the harbor, and I can barely contain my excitement.
The USA again! I'm free and not being chased for once, and I will see my friends soon! And, and, oh, joy!

The schooner
Margaret Todd
put her nose into Massachusetts Bay this morning and headed north up the harbor with a fine wind behind herâwhich was very good, for it means we shall not have to row her into the dock. That is backbreaking work, and we poor sailors are glad not to have to do it.

We slip between Lovell and Great Brewster Islands and then
hard left!
And so we turn, leaving Thompson to starboard, and then there's Spectacle Islandâ
getting close now, girlâ
another small turn to the right, and then into Boston Harbor. I can smell the fish markets from here and to me, after four weeks of clean, bracing salt-sea air, it smells right good. I am a city girl at heart, when not sailing, and can put up with a bit of stench when I hit the land.

“On deck there!” I shout down. “Small lugger to starboard! Should pass us to the right, Sir, no trouble. Two barges coming down to port. Well clear!” There is traffic in this fine harbor, Boston being a bustling port and all.

Captain S. F. Pagels looks up at me and nods. He is a thoroughgoing seaman and knows this harbor like the back of his hand.

“Steady as she goes,” he says to his helmsman, a man as seasoned in his skill as is the Captain in his.

Then, from the topmast, a voice is raised in song .Â .Â .

Oh, I thought I heard the Old Man say,

Tomorrow you will get your pay,

I grin down at the rogues on deck who are giving voice to this song. The crew know I'm getting off in Boston and feel it right and proper to sing me off with this song. They and the
Margaret Todd
are headed up to Eden, their home port on Mount Desert Island, and they are glad to be getting back to wives and sweethearts, but not, I believe, so glad to get rid of me. They are a jolly pack of dogs, and I will hate to see them go.

The work was hard an' the voyage was long,

The sea was high and the gales was strong,

It's like a tradition, an end-of-voyage song, wherein the crew get to air their grievances and get back a bit at the captain. That's why it's always sung only at the
end
of a voyage, and not during .Â .Â . and only if the captain is a decent cove, which Captain Pagels, praise be, is.

The grub was bad an' the wages low,

It's time for you to leave her!

Oh, and I am ready to leave her, count on that. True, the wages were, indeed, low, but the
Maggie Todd
got me from Gibraltar to here, and for that I thank her. She did take her time getting hereâsailing first to Savannah to drop off her cargo of Spanish cloth, then down to Jamaica to pick up kegs of molasses. And oh, those barrels were heavy and I was not spared in the loading of them, no I was not .Â .Â .

The winds were foul, all work and no play,

From the Liverpool Docks up to Boston Bay,

It's time for you to leave her!

And then back up to Charleston to deliver and to take on mail and then on to New York. Finally, here to Boston, dear old Beantown, oh, yes!

We'll make her fast an' stow our gear,

The girls are awaitin' on the pier,

Hmmm
.Â .Â . There is a girl awaitin', but she ain't on the pier, and she ain't up here in the foretop, neither. Oh no, she's right down below on the deck, and I know her eyes are filling with tears. This was the way of it:

I had shipped on this bark at Gibraltar in my sailor-boy disguise, something I have done before and generally gotten away with. I figured things would go easier on me that way and, too, I would be paid seaman's wages, which was good since I was dead broke. If I had announced I was a girl, they would not have taken me on as a member of the crew, and with no money to pay my fare, I'd still be standing on that dock in southern Spain.

The trip over was a good oneâall us coves sitting around the potbellied stove, swapping tales and singing songsâall cozy in this winter crossing, when we weren't up on deck freezing our toes off, that is. The crew was mostly older menâmiddle-aged and well-seasoned sailorsâand then me in my seaman's togs. There was, however, a complication. Captain Pagels had his wife and daughter along, and therein lay the problem, for the daughter, Griselda, took an immediate shine to young Jack the Sailor.

Why did she like me? I dunno .Â .Â . But then, why shouldn't she? She was at the starry-eyed stage of her life when all was potential, shiny and new, and nothing was old and dull .Â .Â . so she did not necessarily dream of the heavily whiskered men of her father's crews. And here's downy-cheeked Jack the Sailor, no threat at all to her maidenly virtue, a virtue I sensed early on she was right willing to give up to young Jack. Down in the fo'c's'le, we had many a fine story and song. I got not a few ribald gibes concerning the Captain's lovely daughter, but I bore up under it, blushing and looking away.

So I
very
carefully gave her a shipboard romance, since there seemed no way to avoid it .Â .Â . and it was a
very
innocent romance you may be sure. She was but fifteen and quite pretty and, I gotta say, for a kid, she was quite amorous.

So what was the harm in that? None, as I see it. She'll always remember this cruise most fondly, as memories seem to glow more golden as the years pass. Ah, yes, but what of the parting that must now come, and what to do about a young girl's tears?

This morning, before we entered the harbor, she came to me by the base of the third mast, well out of sight of her father, who stood on his quarterdeck, preparing to con his ship down the channel. I took her shoulders in my hands, looked deep into her brimming blue eyes, and spouted out the most awful, high-sounding nonsense .Â .Â .

“Oh, Griselda, it grieves me to the depths of my poor soul, but I must go now and leave you, love. I know that it is the best thing to do for I am but a poor, penniless sailor and you are the fine daughter of a rich merchant captain. While I will always be poor and penniless, you shall go out in society and become a fine lady. You will be admired by all and you shall marry a great man. And I .Â .Â . I will remain married to my true mistress .Â .Â .”

At this point I put my hand on my breast and look out across the water and conclude with a heavy sigh .Â .Â .

Yes, I had a hard time keeping a straight face, but I do think I let her down as easy as I could. She snuffled and buried her face in my front, and we remained that way till I was called away to the foretop.

Now I thought I heard the Old Man say,

One more good heave and then belay,

And it is, indeed, time for me to leave her, so off the
Margaret Todd
I bounce. On my way down, right by the gangway, amidst all the cheers and catcalls, one grizzled old cove, Thaddeus Smathers, by name, grabs my arm. He winks broadly at me and whispers into my ear, “Ye didn't fool me for a minute, no ye didn't, Jacky Faber! Good sailin' to ye, lass!” I gulp and press on. One more soulful glance back at Griselda, standing bereft at the rail, and I am off.

So I rambled back into Boston town, and here I am again, stepping onto the old familiar ground.

I mean to go to the Pig and Whistle, see Maudie, take rooms, order up a bath, and generally freshen up before going to visit my other friends. And I need to check out the lay of the land. After all, there are some around here who feel quite strongly that I should be serving out my life sentence in the penal colony in Botany Bay, Australia. So I must be careful.

Ah, dear old Boston,
I think as I walk up State Street. Poor Jack the Sailor, home at last, clad in sturdy sailor gear with seabag on my shoulder, and soaking in all the old familiar sights. There's Ezra Pickering's office, and there's the faÃ§ade of Faber Shipping Worldwide. Oh, how it gladdens my heart to see it, the sign above its doorway all gilt and gold and black and deep maroon and the Blue Anchor flag flapping merrily above.

But no, I do not stop. I press on and round the corner, my dry throat ready for a mug of the Pig's good strong ale, and .Â .Â . and then I am shocked to my core.

The Pig is dead.

The dear old Pig and Whistle is closed. Heavy boards are nailed over its windows and door, and its sign bearing the happy fat pig playing on his pennywhistle and dancing a merry jig is faded and peeling, and it hangs lopsided by a single hinge, twisting sadly in the breeze.