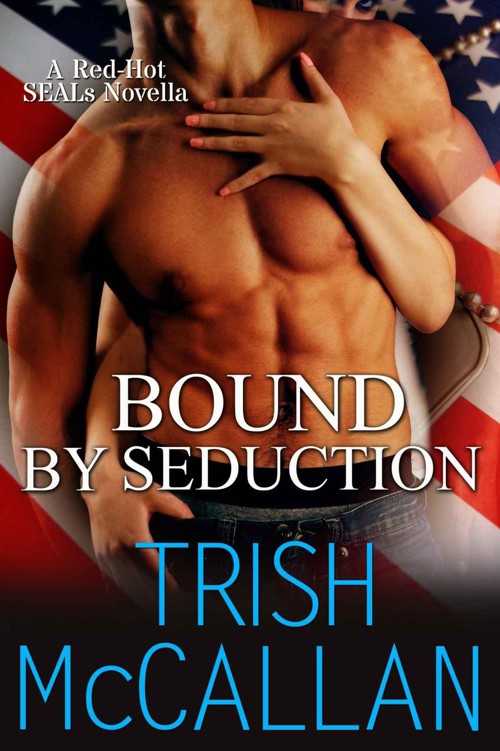 A woman on the prowl…

After three years of grieving, widow Demi Barnes is ready for another relationship—a purely physical relationship. One that won’t involve her heart, interfere with her life or tarnish the love she still carries for her beloved husband. Aiden Winchester, her best friend’s brother, fits the bill. As an active operator within the elite SEAL program, he’s rarely home, and his dangerous career insures she’ll lock down any stray feelings for fear he’ll break her already fragile heart. And then there’s the way his long, lean body, chiseled features and delicious ass launch a full array of tingles, chills and hormonal meltdowns whenever he’s near. The problem? Aiden’s barely aware she exists.

A SEAL on a mission…

Aiden Winchester wanted Demi Barnes the moment his sister introduced them, but she was married and off limits. After her husband’s death, he battened down his hunger and waited for her to open herself emotionally. But when he discovers the woman he’s lusted after for five long years is about to embark on a rebound fling with someone else, it’s full steam ahead and all ammunition on deck. The only man Demi will take to bed—or on the kitchen table or up against the wall—is him. And it won’t be a short-term fling.

On the battlefield of desire every advantage counts, so when a persistent admirer turns stalker, Aiden grabs the opportunity to move in with Demi under the guise of protection. The two square off in a close-quarters battle of the heart—but when the passion settles and the sheets cool, will their connection prove fleeting or permanent?

My thanks to the following people for their excellent help in producing this book!

Demi Barnes paused in front of the tavern door to glare up. Her red sweater, red mini skirt and four-inch red stilettos turned an odd shade of fuchsia under the bright pink fluorescent light spilling down from the gaudy, blinking sign on the rooftop. Which kinda defeated the whole purpose of her fuck-me-now ensemble.

The
Mysteries of the Human Brain
documentary The Science Channel had aired earlier that week had linked the color
red
to male arousal. Not pink, not fuchsia—red.

With a sigh, she tugged down the leather mini-skirt and adjusted the plunging neckline of the figure-hugging sweater so it would leave
something
to her target’s imagination. As she yanked the neckline up, her fingers tangled in the thin gold chain hanging from her neck.

A shaft of guilt struck. She should have taken the chain off—along with the diamond studded wedding band that dangled from it. But removing it felt wrong. She’d been wearing the diamond band, in one way or another, for seven years.

But then again, wearing the symbol of her everlasting love for Donnie while she seduced another man felt wrong too…worse than wrong…it felt…just…icky. So she carefully slipped the chain over her head and dropped it into the leather clutch that held her cell phone, driver’s license, a small wad of cash and a sampling of condoms in every size and texture imaginable.

With one last tug on the mini-skirt and a final adjustment to her sweater, Demi squared her shoulders.

But the thought of another night spent in front of the television was way too depressing. It was time to take charge of her life; rejoin the kingdom of the living. Donnie had been dead for three years now—three excruciatingly lonely years. He’d be the first to tell her to dust herself off and get back out there…connect with someone. Of course, he’d also insist that her current plan to alleviate her loneliness through sex was crazy…but she wasn’t ready for a relationship yet. At least not a real relationship. Not one with the potential to develop into love.

What she was ready for, what she wanted with every tingle and twitch of her libido, was some good old-fashioned sex. Pure wicked sensation. A no-nonsense, no strings attached, no emotions allowed, sex buddy. And Aiden Winchester, the man who fit every one of her criteria, and tickled her awakening sexuality, was inside this bar—or so she’d been told. She just had to march through that door and find him…and seduce him.

As she reached for the door handle, the door swung open. She wobbled back on her skyscraper heels to give the brown haired, broad shouldered guy exiting the tavern some room. He scanned her, a quick up and down sweep that took in her spiky pink hair and red stilettos, as well as everything in between.

“Well, hello there,” he said, stopping in his tracks. He scanned her again, his pale blue eyes warming. “Are you looking for someone, or with someone?”

Looking for someone? As in, looking to hook up with some random guy?

Well, she was looking for a hookup, all right, but not with just anyone. Her libido had given her specific instructions on whom to bring home.

Her voice emerged unwittingly breathless thanks to the sudden bounce of nerves in her belly. Not that her new admirer appeared to mind the Marilyn Monroe impression, judging by the way his blue eyes shimmered.

“Lucky someone,” he murmured, his gaze dropping to the expanse of white skin and curves exposed by the plunging neckline.

Demi shifted uncomfortably, fighting the impulse to drag the neckline up. Which was ridiculous, considering she’d spent hours changing clothes in her quest to find the perfect combination of red, figure hugging clothes that would expose the most cleavage and thigh.

“Well…” Demi sidled toward the entrance to the tavern, or at least as close to a sidle as a girl could get in four-inch heels. “…see you around.”

“Not so fast there, sweetheart,” her admirer said, as he caught the edge of the door she’d started to open. “Most of the guys in there are fresh off rotation and haven’t had a woman in months. You walk in there looking like that and you won’t make it past the first table.”

There was a grim edge to his voice.

Surely he was exaggerating
.

From what she’d gathered from Kait, her best friend and resident Navy SEAL expert, the Bottoms Up Tavern was a favorite haunt for SEALs. Or at least the ones living near San Diego. And SEALs were some of the most self-disciplined men in the world. They had to be, to survive their profession…right? She’d be perfectly safe in there…wouldn’t she?

Frowning, she stared down the plunging neckline of her sweater, which put everything she owned on display…and then there was the tight, red mini-skirt which barely covered her ass. She’d dressed to kill, or at least smother Aiden’s reservations. But perhaps in her quest to punch through her target’s reserve and spark a reaction she’d gone a mite too far?

“I’m sure I’ll be fine. There must be other women in there,” she said, shifting uncomfortably. He was standing so close she could smell the spicy musk of his cologne. Yet his closeness and scent did nothing to stir her fickle hormones, unlike Aiden, whose presence alone was enough to throw her body into a tingly, palm-sweating meltdown.

“Sure, there are women, but…” he trailed off and shook his head. “Sweetheart, no offense, but your guy’s an idiot. He should never have let you walk into this place dressed like that.”

He didn’t back down. “Yeah—let you. He should know better. You clearly don’t. No way in hell can I let you walk in there alone, so I’ll play escort until we track down this guy of yours.”

“That’s hardly necessary,” Demi stressed, as he opened the door and ushered her into a large, square room with wood tables and chairs full of tanned, muscled, hard-faced men.

She’d been right. There were women sitting at the tables too, quite a few of them, as a matter of fact. But most of them carried the brassy-haired, empty-eyed badge of someone who’d been around the block a time or twenty. And they’d all paired up with at least one guy, in some cases two, in others three and four.

Every eye in the room swung toward the door and locked on her. A good two dozen appreciative male gazes did the same up and down sweep of her red-clad figure as her self-appointed escort had done in the alcove. The women, however, didn’t look nearly as happy to see her.

“Relax,” he murmured in her ear as he looped an arm around her shoulder. “I’ve got this.”

From the way the previously avid eyes watching her suddenly lost interest and returned to their tables and conversations, the arm around the neck must be some kind of primitive signal.

“Let’s find this guy of yours.” That earlier grimness was back in his voice. He escorted her across the wood floor of the tavern. “You see him?”

Demi scanned the dozen or so tables scattered throughout the room. There were plenty of dark haired, lean bodied men sitting at those tables—but none of them were Aiden. A gleaming, mahogany bar ran the entire length of the left wall, but he wasn’t among the men bellying up to the bar, either.

According to Kait, it was tradition for Aiden, as well as the rest of the men from his platoon, to celebrate their first night off rotation with a round of drinks at the Bottoms Up Tavern.

“I don’t see him,” she murmured, her stomach clenching and sinking simultaneously. She glanced at her escort. “This is the Bottoms Up Tavern, right?”

“It is.” He glanced from table to table. “What’s his name? I probably know him.”

Her new admirer had the same lean, muscled frame and economical way of moving that Aiden had. Their eyes were the same too—oh, not the color, but the expression. Watchful, slightly suspicious. Like they were constantly on guard. There was no doubt in her mind this guy was a SEAL, and since Aiden’s team hung out here, they probably did know each other.

If Aiden was here, in the restroom or something, then her escort would know his name soon enough. But if he wasn’t here…the thought of everyone banging on Aiden’s shoulders and teasing him about the pink-haired stalker who’d come looking for him…

She grimaced, the possibility rolling around in her belly like greasy, week-old sushi. Better to keep his name quiet so he wouldn’t find out she’d been looking for him.

“Maybe he’s in the restroom,” she said, pretending not to hear his question.

He stared at her for one long moment, sharp intelligence glittering in his light blue eyes, before shrugging. “The john’s in the back. There’s a pool round and poker game back there too. Could be he’s waiting for you there.”

The tavern was oddly quiet as he escorted her along the bar toward the back room. The music was some light-rock, honky-tonk tune that had been dialed way back. So far back it barely vibrated against her eardrums or interfered with the conversations taking place around the tables. This had to be the quietest, most sedate bar she’d ever been in.